Accessibility links
2020 Census Will Ask About Same-Sex Relationships Unlike past census forms, the questionnaire for 2020 will include response categories for the relationship question that make a distinction between same-sex and different-sex couples. 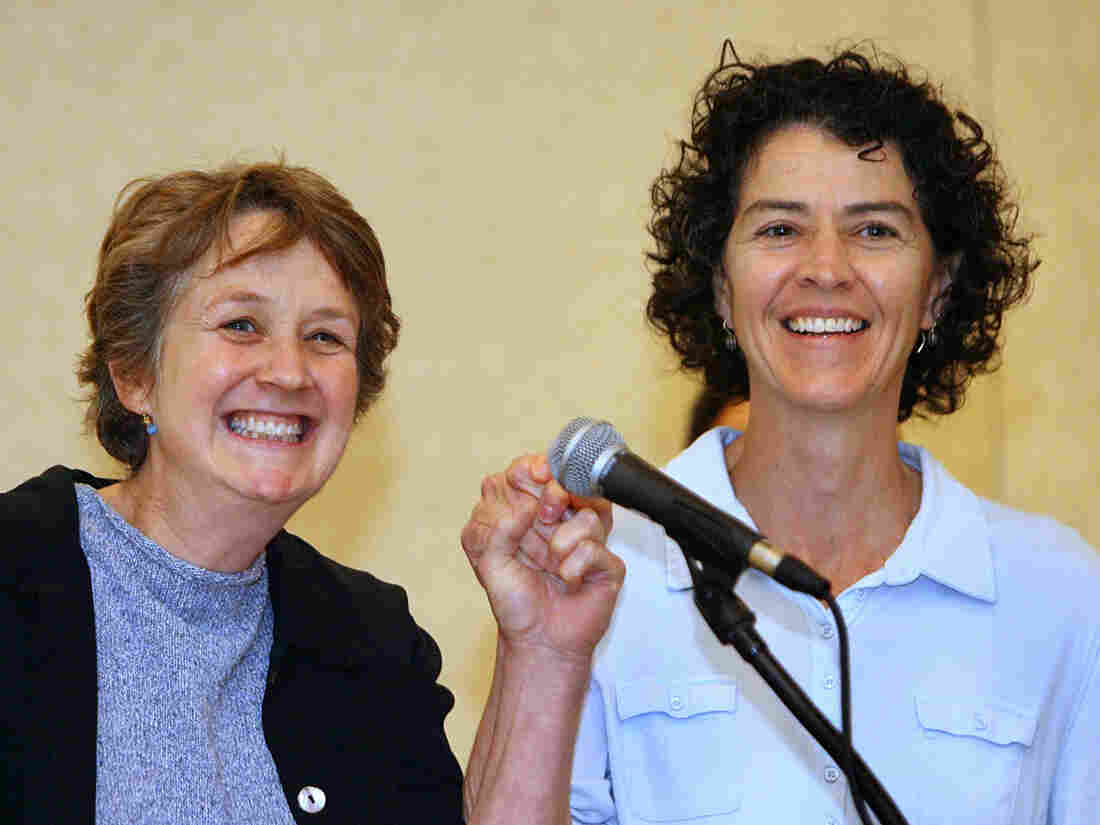 Wendy Becker (left) and Mary Norton of Providence, R.I., raise their hands after the 2006 Massachusetts court ruling that allowed same-sex couples from Rhode Island to marry in Massachusetts. For the 2020 census, the couple can choose the new response category for "same-sex husband/wife/spouse." Boston Globe/Getty Images hide caption 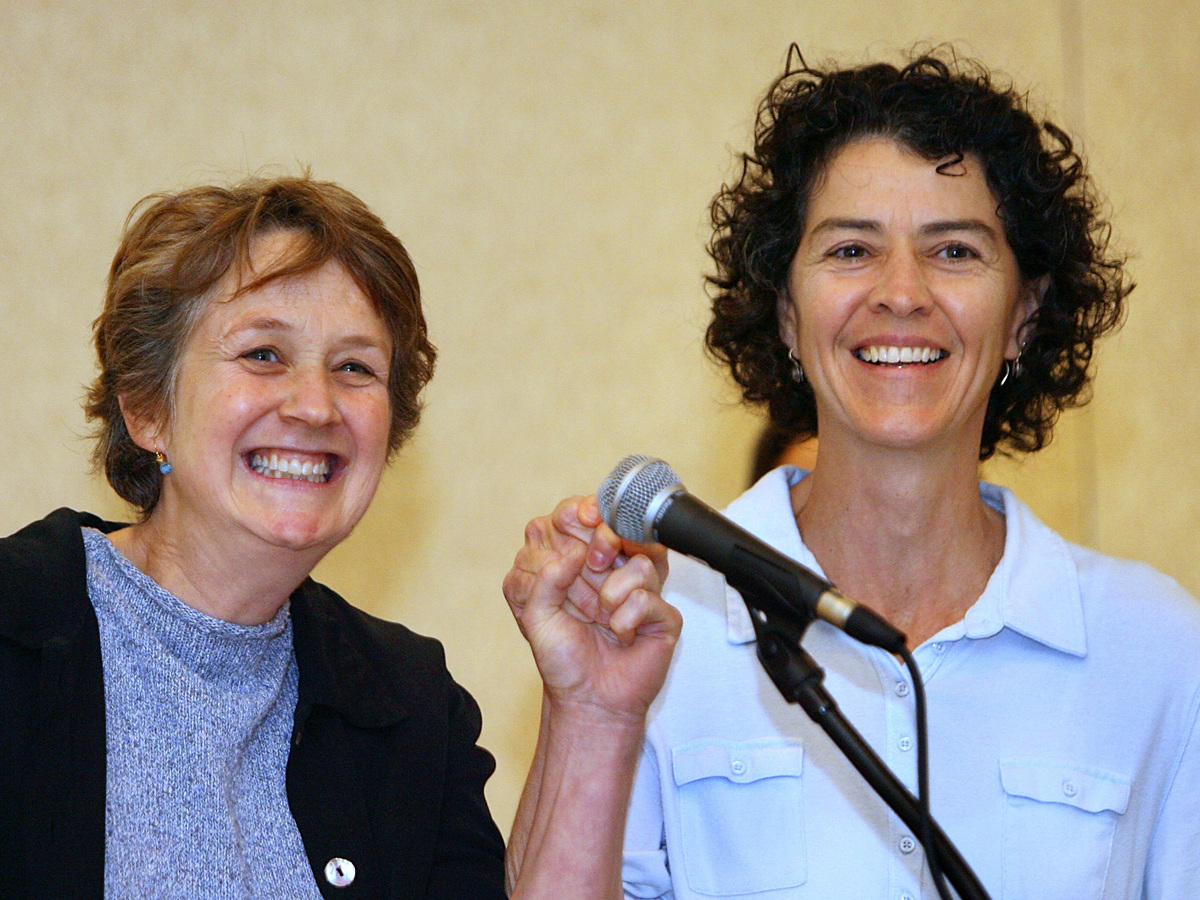 Wendy Becker (left) and Mary Norton of Providence, R.I., raise their hands after the 2006 Massachusetts court ruling that allowed same-sex couples from Rhode Island to marry in Massachusetts. For the 2020 census, the couple can choose the new response category for "same-sex husband/wife/spouse."

For the 2020 census, couples living together will be asked to define their relationship to their partners in a new way – "same-sex" or "opposite-sex"? The Census Bureau announced the change Thursday in its report to Congress on the questions all U.S. households will see on questionnaires used for the upcoming national head count.

The new response categories for the relationship question come after Census Bureau researchers found that using the terms "same-sex" and "opposite-sex" on the census form could improve the federal government's estimates of how many same-sex couples are living in the U.S. Some demographers anticipate the change may help produce the most comprehensive national data yet on same-sex couples that can better inform public policy affecting LGBT people.

'Some people do occasionally make mistakes'

Conducted once a decade, the U.S. census began collecting data about same-sex couples in 1990, when the "unmarried partner" category was added to the relationship question to measure the growing trend of couples living together before tying the knot.

Husbands, wives and unmarried partners who both marked the same response to the sex question on recent questionnaires have been included in the bureau's estimates of same-sex couples. In the mid-2000s, though, researchers at the bureau started looking into whether the counts were inflated because some different-sex couples had accidentally marked the wrong box for their sex.

"Some people do occasionally make mistakes," says Gary Gates, the leading demographer on collecting data about lesbian, gay, bisexual and transgender people who has served as a consultant to the Census Bureau. "That mistake can be literally just sort of like an errant, stray mark in filling out the form that then makes it unclear as to which box was checked."

How Many Gay Couples Have Tied The Knot? Nobody Knows

Since the count of different-sex couples greatly outnumbers that of same-sex couples, Gates adds that a small number of mismarked boxes can have a big impact on data.

"Even if only a few different-sex couples make an error where they appear to be same-sex couples, it's a large enough problem that it, for lack of a better word, contaminates the same-gender couples' sample," says Gates, a former research director of the Williams Institute at the UCLA School of Law.

'It really normalizes our experience'

Beyond improving national statistics, many advocates of equal rights for LGBT people see the changes to the census relationship categories as a symbolic victory.

Before Wendy Becker married her longtime partner Mary Norton in 2006, she remembers having to choose boxes on forms that could never quite describe their relationship. Once at a hospital where she was preparing to undergo surgery, Becker had to complete a form. A woman helping her answer the questions presented her with four options: married, single, divorced, and widow.

"And I said, 'I understand what the categories mean. But I've been with my partner for 15 years, and none of this fits me,' " Becker recalls. "I remember being so upset when she checked 'single.' "

Becker says that's why she's excited to be part of the practice run of the 2020 census that's taking place right now in Rhode Island's Providence County. Residents there can choose from the new relationship categories the rest of the country will see on the 2020 census questionnaire in two years, including "same-sex husband/wife/spouse" and "same-sex unmarried partner."

"It really normalizes our experience on an American government form so that everybody looking at it and everybody filling it out sees that we exist," she adds.

Still, Becker acknowledges that adding categories for same-sex spouses and unmarried partners on the 2020 census leaves out many LGBT people.

"If this is about how resources are spent or given to communities and we are talking about the LGBTQ community, not everyone is married or in a relationship," says Ronald Lewis, an out gay man who is currently single.

Living in Providence, R.I., Lewis has received a letter from the Census Bureau about participating in the test for the 2020 census. But the questionnaire won't have a space for him and other LGBT people who are not living with a spouse or unmarried partner to indicate their sexual orientation. That means for now, there are no reliable national data about how many LGBT people live in the U.S. that can inform public policy.

So far, the census has not included specific questions about sexual orientation or gender identity, although in 2016, the Census Bureau received requests from the Justice Department and three other federal agencies for those question topics to be added to a smaller, annual survey the bureau also conducts — the American Community Survey. (The bureau's decision not to propose adding the topics to the survey has sparked much controversy.)

For the last census in 2010, Chung says she mailed back her questionnaire with a pink sticker to add those questions to the form herself.

"You know, these are all labels," says Chung, a transgender woman. "But if we don't have the proper labels when we try to look at the picture, there will be a lot of missing pieces, like jigsaw puzzles."

In 2020, she adds, even with same-sex couples recognized on the census, there'll be a lot of other people in the LGBT community missing from the picture of America.