Accessibility links
Wrestle Like A Girl: How Colleges Are Pushing The NCAA To Recognize Women's Wrestling Women's wrestling has been an Olympic sport since 2004, but isn't recognized by the NCAA. Now Iowa State and other colleges are pushing to get the league to recognize women's wrestling. 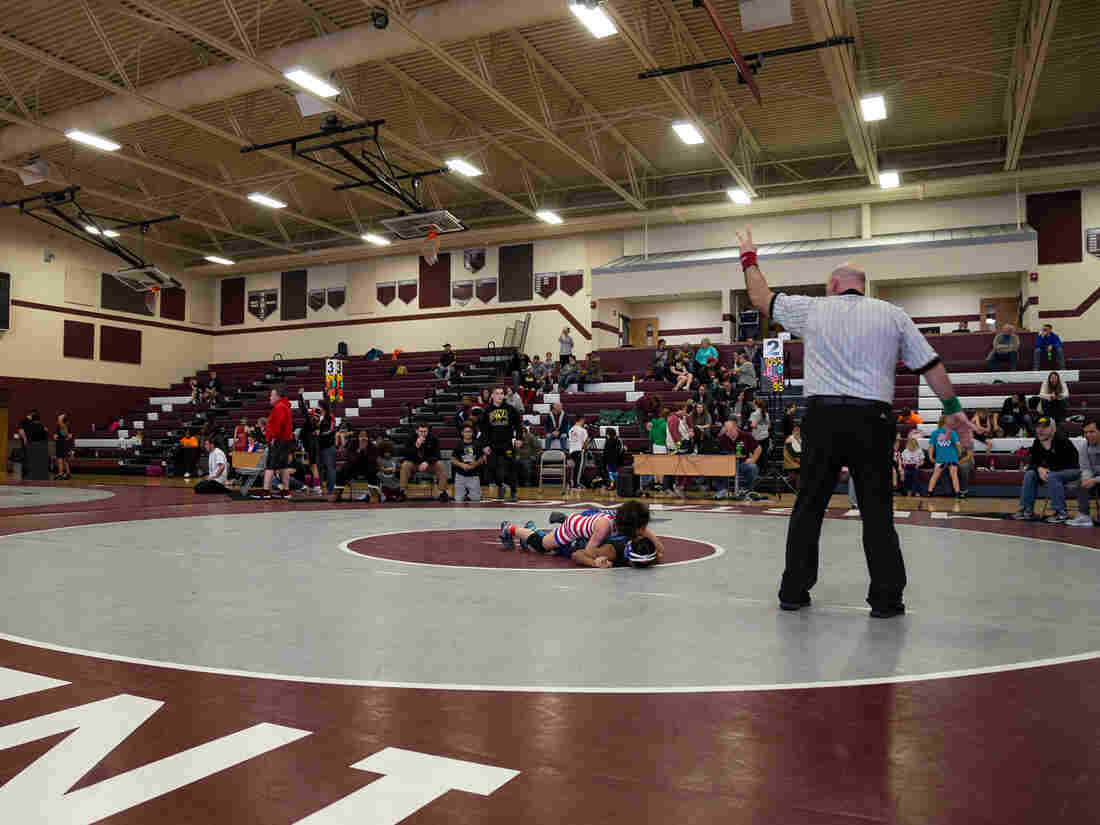 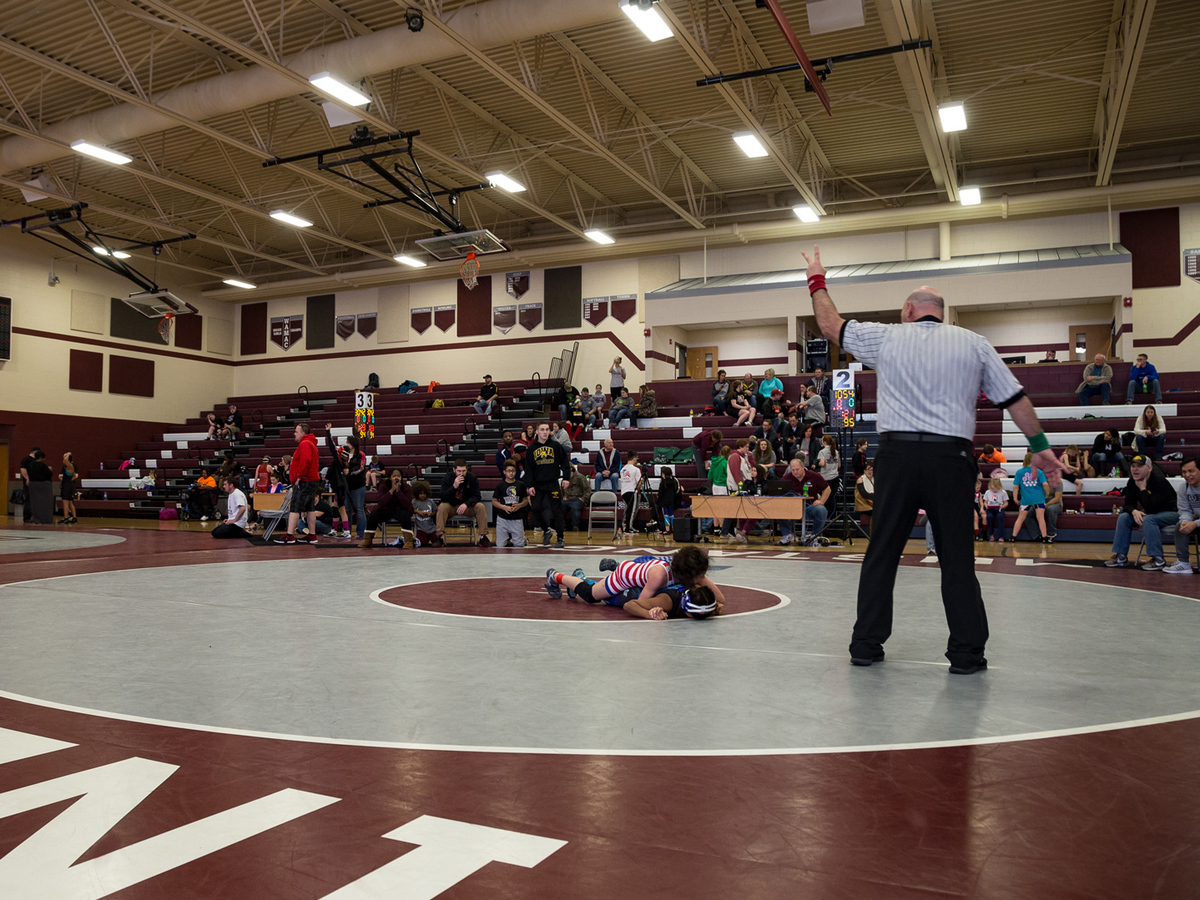 Two wrestlers compete at Iowa's only standalone wrestling tournament for girls Pre-K through 12th grade at the Independence High School in Independence, Iowa on March 4.

Wrestling is a big deal in Iowa. If you walk into any bar in the Hawkeye State during its high school wrestling tournament, chances are the event is blaring on every TV in sight.

Like many states, Iowa doesn't offer separate sex divisions in high school wrestling, meaning that boys and girls must wrestle each other. Despite the local popularity of the sport, there's not much of an infrastructure for its female athletes — only two girls have ever qualified to participate in Iowa's state high school tournament since it started almost a century ago. Many athletes, coaches and fans of female wrestling want the status quo to change, including Charlotte Bailey.

The 47-year-old coach has been coordinating the state's only standalone wrestling tournament for girls since 2012. Bailey wants to see more girls involved in the sport, and says that parents can often be reluctant to have their daughters wrestling boys. She also thinks that girls have a better chance at long-term wrestling success — like making it to the Women's National Championships — if they're able to compete against each other at a young age instead of having to compete against boys. "Some [girls] will never know how good they would have been had they been wrestling their female peers," Bailey said.

These barriers didn't stop 17-year-old Felicity Taylor, a senior at South Winneshiek High School, from getting involved in the sport. After she was cut from the cheerleading team freshman year, Taylor tried out for wrestling instead. Now, she's the first girl in Iowa high school wrestling history to win more than 100 career victories.

Achieving that record meant Taylor had to compete against more than a few boys who have a problem wrestling girls. "Some of them don't like it," said Taylor. "They'll bump away from me, which frustrates me. You just gotta overcome that, and just deal with it, and know that they're bumping away for you for a reason ... they're scared."

Taylor wants to continue her wrestling career at the collegiate level after she graduates from high school, but there are just a handful of collegiate women's wrestling programs in the U.S. — and at that level, women aren't allowed to wrestle men, despite the fact that many female high school wrestlers never had leagues of their own.

Waldorf University in Forest City is the only college in Iowa with a dedicated women's wrestling team. It's one of 38 colleges that are part of the Women's Collegiate Wrestling Association, a league separate from the National Collegiate Athletic Association, which doesn't recognize women's wrestling. Tyreece Gilder, 32, is the team's head coach. Gilder says if the NCAA recognized women's wrestling, there would be an immediate boost in opportunities for women wrestlers seeking to compete at the collegiate level.

Getting that recognition is a goal of the Colorado-based group called Wrestle Like A Girl. Sally Roberts, a two-time World bronze medal winner and three-time U.S. National Champion wrestler, founded the organization to provide resources for women seeking to wrestle in college. Roberts, a 37-year-old former Marine, says the sport changed the course of her life from a young age. "It's a sport that teaches girls life skills and how to own their space, own their bodies, own their voices," she said.

That's part of the formal pitch her group, and organizations like USA Wrestling and the U.S. Olympic Committee, have been making to the NCAA to open its doors to female wrestling. There are a host of NCAA membership benefits that male college wrestlers can receive that their female peers don't have access to, including health insurance, scholarships, grants and internship opportunities. The WCWA provides its members health information and recognizes athletes who achieve certain GPAs, but doesn't have the same financial assistance as the NCAA.

Seventeen NCAA colleges are ready to start women's wrestling teams if the NCAA will sanction them — including the University of Iowa, which has won 23 men's NCAA championships and produced World and Olympic medalists.

Girls seeking success in wrestling say they want the same benefits and opportunities as their male peers already have — and by providing them to college athletes, many more girls in high school, like Felicity Taylor, might be inspired to get involved in the sport.

"Why would you cut off half the population to such a great sport?" said Coach Gilder. "The sport offers so many benefits that it doesn't make sense to keep that half of the population out of it."