Accessibility links
An Afghan Military Interpreter Finds Footing In The U.S. Gig Economy Ajmal Faqiri came to the U.S. on a Special Immigrant Visa after working as a interpreter and translator for the U.S. military in his home country of Afghanistan. Now, he works the gig economy. 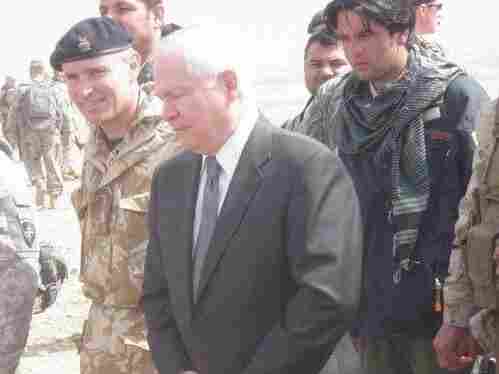 Ajmal Faqiri, third from left, interpreting for former Secretary of Defense Robert Gates. Courtesy of No One Left Behind hide caption

toggle caption
Courtesy of No One Left Behind

The gig economy has been criticized for failing to provide workers the benefits and stability of full-time employment and celebrated for its ability to allow workers to supplement their income on a flexible schedule. Ajmal Faqiri, an Afghan immigrant who lives in Virginia, has experienced both types of work arrangements.

He grew up in Kabul, Afghanistan and served as translator for the U.S. military before arriving in San Francisco on a Special Immigrant Visa in 2013. Faqiri has held more than 10 jobs, and started driving for Lyft in 2015.

Faqiri, his wife and their two children emigrated from Afghanistan in 2013, but the move wasn't the first time Faqiri had to navigate a drastically new economic landscape. As a child in Kabul, he dreamed of becoming a doctor, but the Taliban's occupation of his country and the efforts to push them out derailed those career aspirations. It also brought new opportunities — Faqiri, fluent in four languages, was offered a job as an interpreter and translator for the U.S. military in 2006.

He was just 17 years old when he took the job, which placed him in the same dangers as soldiers. "The first four years I was in the front line fighting against terrorism, Taliban," he said. "It was very tough job because it was scary ... You could see bullets crossing your head."

The remainder of his served time was spent at quieter training centers, where he interpreted between U.S. troops and Afghan troops. He'd work as a translator until 2013. Though he wasn't exposed to the front line at the training centers, Faqiri's life was still in grave danger.

"People called me and said, 'You are infidel, you are not Muslim anymore. We will kill you, you're working with Americans,' and so on and so on — but that didn't stop me from what I was doing," Faqiri said.

Faqiri wasn't alone in receiving death threats. In 2014, the International Refugee Assistance Project estimated that an Afghan interpreter was being killed every 36 hours. In 2016, NPR photojournalist David Gilkey and Afghan interpreter and journalist Zabihullah Tamanna were killed by the Taliban.

"When I start working as a translator there was not even the rumor that they would bring us to the United States. And then things changed," Faqiri said.

In 2006, the U.S. government enacted the Special Immigrant Visa, or SIV, program in response to threats on the lives of Iraqi and Afghan translators and interpreters assisting the U.S. military. Translators whose lives were in danger who had worked directly for the U.S. for more than a year could apply, and if accepted, immigrate to the U.S. with their spouses and children.

The number of visas has failed to keep pace with their demand, however, and so has the rate at which the State Department gives them — only 50 are awarded each fiscal year. A SIV application is, by law, supposed to be processed within months, but it often takes years.

Faqiri first applied for his visa in 2010, and received it after three years of waiting. "I was happy and I was sad," he said. "I was happy because I was going to go to safety. I was sad because I had to get away from my family — from my loved ones, from the people that raised me, they educated me, they always supported me."

Faqiri and his family left Afghanistan for the U.S. the day after he received his visa. When they landed in San Francisco, it became apparent that things weren't going to be easy.

He says that Afghan translators "were told 'we'll give you job, we will give you almost everything,' but unfortunately most of those things didn't come true. ...When I came to United States ... I had to do everything by my own."

That included finding his first job at a car wash. Since then, Faqiri says he's worked more than 10 different jobs, and is always on the lookout for better opportunities. He's had stints in construction, at a furniture store, as a package delivery man, as a car sales associate and as a real estate agent.

Faqiri still works as a real estate agent, but the job doesn't pay enough to make ends meet. To supplement his income, he drives for Lyft in his spare time. Faqiri wishes that he could retire his side gig and spend more time with his family, but finds a silver lining in driving: "It kind of helped me to improve my English," he said, "and also ... that's how I learned a lot of things about the United States." 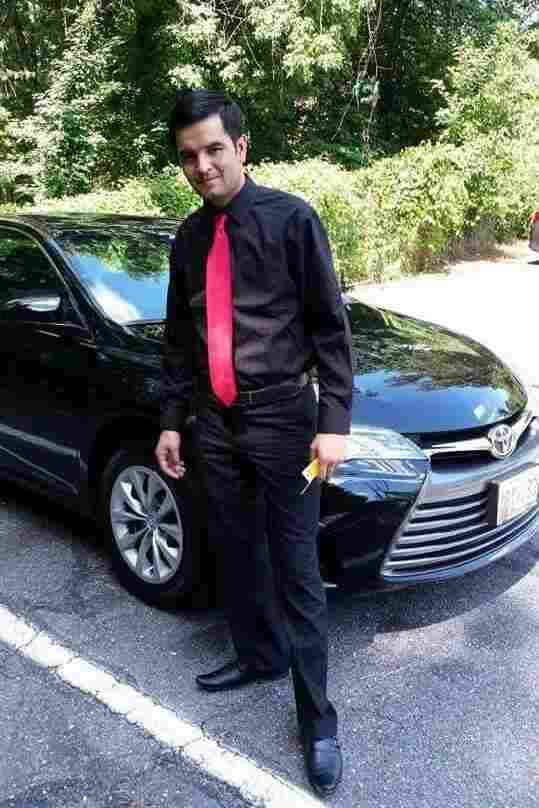 Faqiri with the car he uses as a Lyft driver. Courtesy of No One Left Behind hide caption

toggle caption
Courtesy of No One Left Behind

Faqiri has another job that's much more meaningful to him and his family. He works at No One Left Behind, an organization that helps Afghan and Iraqi interpreters with SIVs resettle safely.

The nonprofit assists translators applying for SIVs, and has helped more than 110 families with the essential basics needed to establish stability and security in their new American communities. They also help translators with achieving their long-term goals, like career development and mastering English through language classes.

Faqiri is working toward long-term goals of his own. He's enrolled in college and is aiming for a degree in information technology, which he hopes will bring him a stable job that will allow him to provide more support to his family. "My biggest hope or wish for the future is that I want to send my children to finish their education," he said. "As a father, I want to take that responsibility to make sure that I facilitate everything for them that they want. That's the most important thing in my life."

For the time being, Faqiri has a more immediate goal. "I want to have instead of three, four jobs, I want to have only one job," he said.

A previous version of this story identified Ajmal Faqiri as a California resident. In fact, Faqiri lives in Virginia.