Accessibility links
Fact Check: Trump's Tweets On 'Caravans' Crossing The Border And DACA, Annotated NPR fact-checked the president's claims on Twitter that "caravans" of people are crossing the U.S.-Mexico border to take advantage of DACA and that Mexico could stop the flow. 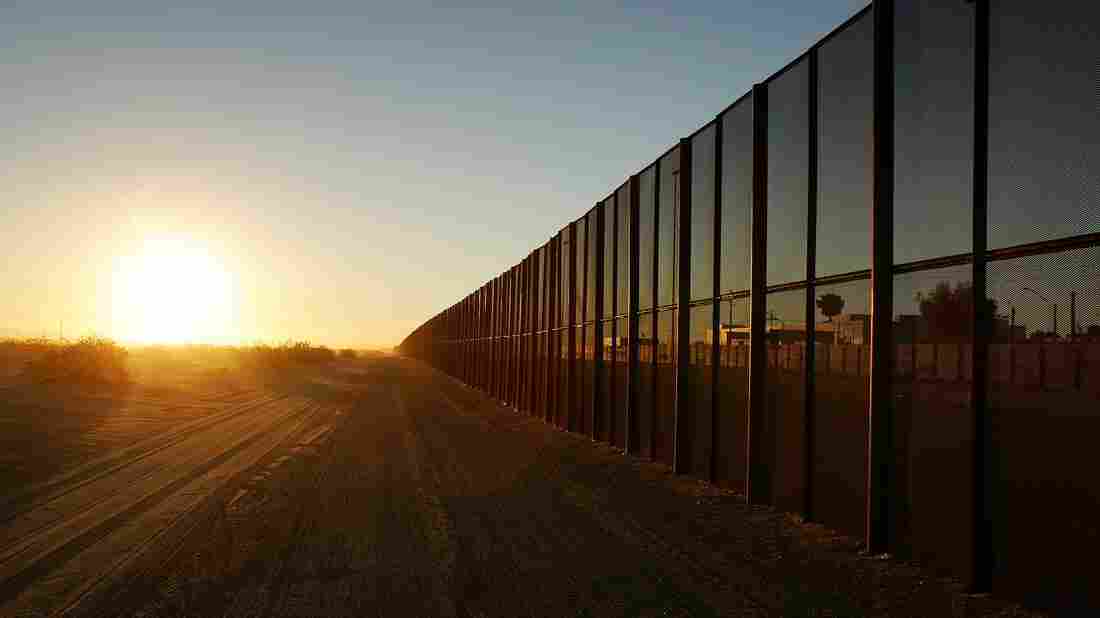 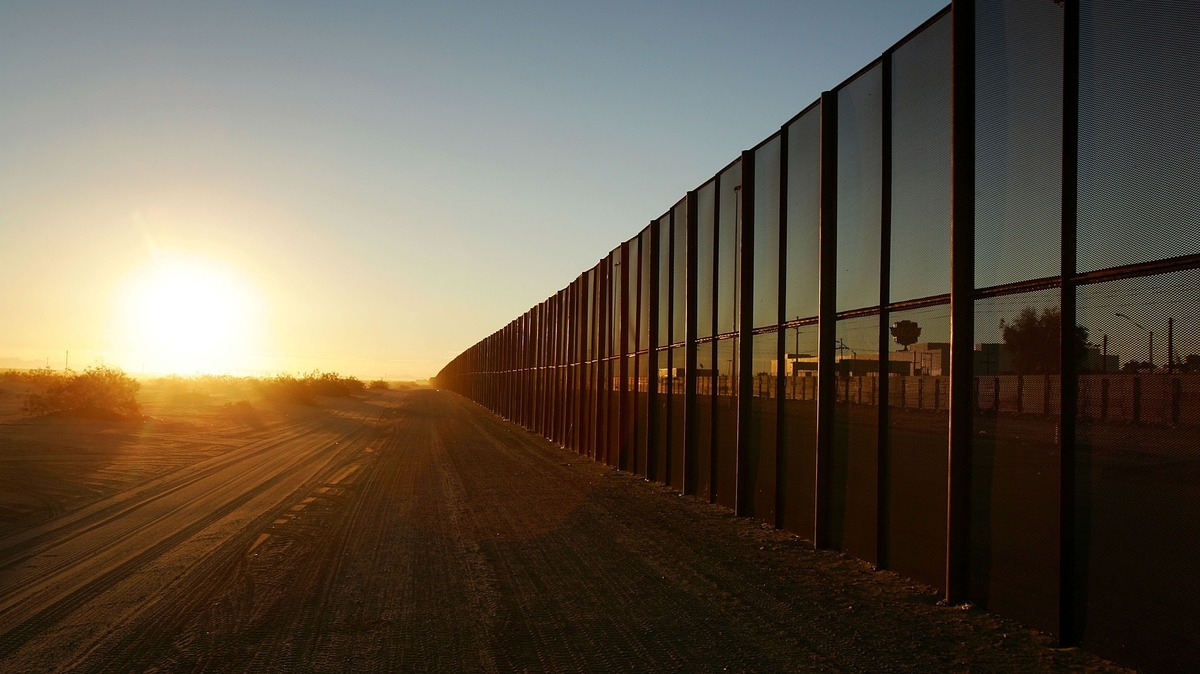 A metal fence runs along the U.S.-Mexico border east of San Luis, Ariz.

"DACA is dead," President Trump declared Monday on Twitter, after an Easter Sunday tweetstorm claiming that large caravans of migrants are heading to the border to take advantage of the Deferred Action for Childhood Arrivals program. He also blasted Mexico for not stopping the influx and repeated his call for a border wall.

The president's tweets include some debatable claims about DACA, border security, and immigration law and policy on both sides of the Southern border.

NPR reporters who follow immigration and the debate in Congress fact-checked six of his tweets:

Claim 1: "Caravans" of migrants are crossing the border

The president offers no source for his claim about "caravans" of immigrants coming to the U.S. But he is likely reacting to a story broadcast by Fox News on Sunday morning about a caravan of migrants crossing Mexico, reportedly heading for the border. The caravan, organized by the group Pueblo Sin Fronteras, numbers more than 1,000 people, most of them from Honduras, as BuzzFeed reported last week. So far, Mexican authorities haven't moved to block the migrants. It's not clear how many of the migrants actually intend to enter the U.S. or seek asylum here.

Trump also tweeted that the border is "getting more dangerous." Assaults on Customs and Border Protection agents jumped nearly 50 percent last year. But the rate of illegal border crossings into the U.S. dropped to its lowest level in decades. Arrests last year hit a 46-year low, though they have ticked back up slightly in the first months of 2018.

The president has vowed repeatedly to end "catch and release." That's how critics describe the policy that allows many migrants to go free until their requests for asylum can be heard by an immigration judge, a process that often takes years because of court backlogs.

Despite the president's repeated calls, "catch and release" is proving difficult to dismantle, in part because of laws and settlements that constrain how long immigration authorities can hold migrants, especially children.

Mexico's foreign minister fired off his own tweet after Trump's, insisting that Mexico and the U.S. work together on migration every day and "the facts clearly reflect this." Foreign Minister Luis Videgaray Caso also added, in reference to reports that Trump's tweets were in response to a Fox News story, that inaccurate news reports should not serve to question binational cooperation.

Mexico has recently detained large groups of migrants coming through the country. Just last Friday, authorities discovered 136 migrants from Central America in the back of a sweltering hot truck in the southern state of Veracruz. In March, another group of 103 Central Americans was rescued from a truck in the northern border state of Tamaulipas. According to a report by Reuters, official figures show that more than 800 Central American migrants have been discovered in safe houses or in trucks in Mexico in the first three months of this year.

Claim 3: New migrants are "trying to take advantage of DACA"

This is simply not how DACA works. New and future immigrants cannot "take advantage" of DACA benefits because they're not eligible for the program now and never were.

DACA, or Deferred Action for Childhood Arrivals, offers temporary protection from deportation to immigrants who were brought to the U.S. illegally as children. The Obama-era program also allows them work legally in the U.S. But it's available only to immigrants who have lived in the U.S. since 2007 and meet a host of other requirements.

In other words, it's misleading to suggest that anyone seeking entry to the U.S. today could benefit from DACA.

The Trump administration moved to end DACA last fall, but courts have put that decision on hold while legal challenges play out. For now, the Department of Homeland Security is required to renew protections for existing recipients. But it is not accepting applications from people who have never had DACA before.

Claim 4: Mexico has "absolute power" to stop the "caravans"

In addition to finding and detaining large groups of migrants, Mexico has also seen the number of Central Americans requesting asylum in its country skyrocket in recent years. Many are forgoing the dangerous and increasingly difficult crossing into the U.S. Last year more than 10,000 migrants, mostly from Central America, requested refugee status or asylum in Mexico. While the number of Central Americans apprehended at the U.S. Southern border plunged immediately following Trump's inauguration, the numbers have steadily risen in recent months, suggesting that the flows of migrants from the troubled region may be on the rise.

Claim 5: Congress should use the nuclear option

Trump often calls for the Senate to eliminate the filibuster, the body's rule that requires a 60-vote majority for most legislation to advance in the Senate. When Trump mentions the filibuster it may conjure up images of Mr. Smith Goes to Washington with a long, stemwinding speech on the Senate floor. But that hasn't been the standard practice for decades — or longer.

Instead, the modern filibuster usually involves a simple objection, often from the minority party. That typically gives senators a set period of debate, after which the bill is subject to a procedural vote known as cloture.

It usually takes 60 of the 100 senators to vote to reach cloture and move on to a final vote. Trump sees the filibuster as the only thing preventing Congress from passing many of his most partisan priorities like funding a wall along the U.S. border with Mexico or repealing the Affordable Care Act. But there are two main problems with that thinking: Many of Trump's most controversial proposals couldn't pass in a filibuster-free Senate, and most senators aren't interested in ditching the higher bar for legislation.

The Senate already voted on a White House-approved immigration plan earlier this year — and it failed 39-60, far short of a simple majority. The proposal was among the options considered during a lengthy immigration debate in February.

The effort to repeal the Affordable Care Act failed to meet a similar bar in that late-night vote where Sen. John McCain, R-Ariz., killed the bill with a simple thumbs down. That night, 51 senators voted against the ACA repeal process and 49 approved, effectively killing that bill.

The filibuster is a popular scapegoat when the legislative progress grinds to a halt in Congress. Presidents and frustrated lawmakers lambast the rule as an excessive burden to passing widely supported legislation. But it is also one of the signature features of the slower, more deliberative Senate.

Senate leaders have scaled back the filibuster a few times in the past — most notably in 2013 when former Senate Majority Leader Harry Reid, D-Nev., triggered what is known as the nuclear option to overcome a backlog of President Barack Obama's picks for executive offices and judgeships.

Reid eliminated the filibuster for those positions, sparking a new precedent that federal judicial appointments and many executive office nominees can be approved with a simple majority. That's still the case today.

Senate Majority Leader Mitch McConnell, R-Ky., had a nuclear moment of his own last year when he extended that simple majority threshold to Supreme Court nominee Neil Gorsuch.

But McConnnell says he doesn't support getting rid of the filibuster entirely. He refused to take the drastic step of eliminating the protection to end a government shutdown earlier this year.

The legislative filibuster has wide support among senators who view it as an important way to protect the rights of the minority party to force debate on controversial issues. The higher bar forces a broader consensus on legislation, which can help prevent Congress from passing new, more partisan laws every time a new Congress is elected.

Democrats say it was Trump, not them, who killed a deal to fund the wall in exchange for protections for the roughly 700,000 immigrants currently protected under DACA.

Congressional negotiators considered adding $25 billion in wall funding in exchange for those legal protections in the spending bill approved in Congress last month. But Democrats and many GOP staffers say it was the White House that backed away from the deal. The Washington Post reported details of the frenzied last-minute push for a DACA deal, and several aides on Capitol Hill have largely confirmed that account to NPR.

The fight over DACA has been raging in Congress since last year when Trump announced plans to rescind Obama's executive order protecting those immigrants who were brought to the country as children and are now here illegally.

Trump originally planned to end those protections in early March, but courts have stepped in, maintaining the protections while a bevy of lawsuits against the Trump administration plays out.