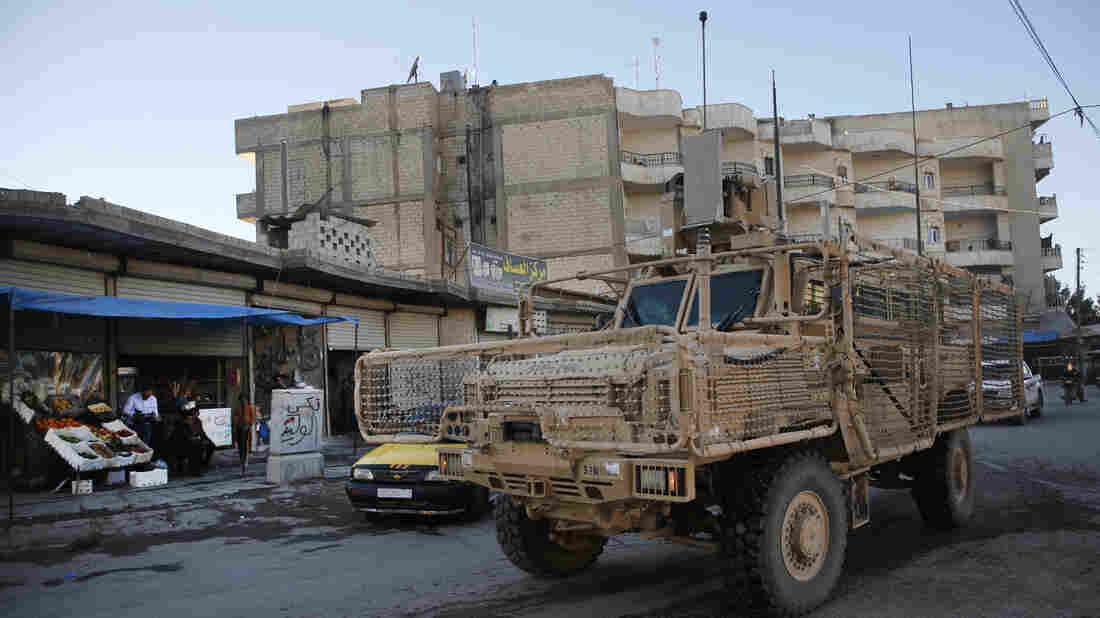 A vehicle of U.S. troops passes on a street in Manbij, Syria on Saturday. President Trump's unscripted public declaration this week about pulling out of Syria "very soon" while at odds with his own policy are unnerving for the Kurds in this context. Hussein Malla/AP hide caption 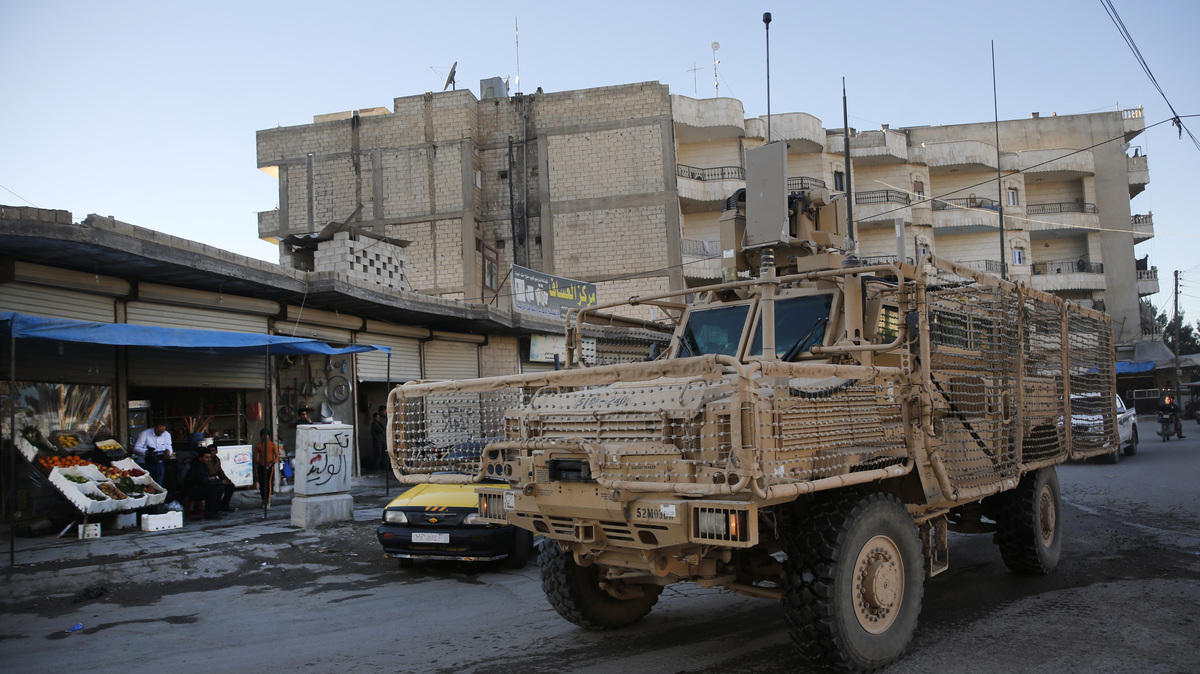 A vehicle of U.S. troops passes on a street in Manbij, Syria on Saturday. President Trump's unscripted public declaration this week about pulling out of Syria "very soon" while at odds with his own policy are unnerving for the Kurds in this context.

The White House has ordered the State Department to put on hold $200 million in recovery funds to Syria, following President Trump's remarks last week signaling a possible withdrawal of American troops from Syria.

The funding, which was meant to support infrastructure projects in areas controlled by U.S.-backed rebels, was promised by former Secretary of State Rex Tillerson last month at an aid conference in Kuwait. The freeze on the money could put Trump in a confrontational position with U.S. military officials who say the fight against ISIS is not yet complete.

The decision comes just months after Trump agreed to the strategy devised by Tillerson, which consisted of a long-term plan to defeat ISIS and remain active through the ongoing diplomatic push to bring an end to the Syrian conflict. Prior to freezing the funds, Trump's declaration of a full withdrawal from Syria was at odds with with what the Pentagon also said on Thursday.

"We'll be coming out of Syria, like, very soon," Trump said during a speech in Richfield, Ohio, on Thursday. "Let the other people take care of it now. Very, very soon, we're coming out."

The hold on the money and the status of the anti-ISIS campaign in Syria will be discussed at a National Security Council meeting next week. Trump reportedly ordered the funding to be frozen after reading a report about it in The Washington Post, U.S. officials told Reuters.

The Pentagon has estimated that ISIS has surrendered about 98 percent of its territory in Iraq and Syria, but U.S. military leaders are still concerned by Trump's calls to reverse course, says Richard Engel, NBC chief foreign correspondent, who just returned from Syria. They say withdrawing the nearly 2,000 U.S. troops too early would leave the Kurdish-led Syrian Democratic Forces in a lurch.

"It is a very sensitive time where the U.S. can see the end zone, can smell the finish line, and if we leave prematurely, ISIS comes back and this partner — will be left to fend for themselves against Turkey which is not an adversary that they are in a position to confront," Engel tells Here & Now's Peter O'Dowd.

If American troops withdraw, the Kurds will have to fend for themselves against Turkish forces, who they are fighting in northern Syria. The U.S. remains stuck in the middle of a conflict between two allies – the Kurds and Turkey – while also weighing the need to maintain some sort of military presence in Syria in order to prevent ISIS from rising again.

Leaving Syria would "be the single worst decision the president could make," Republican Sen. Lindsey Graham told Fox News Sunday. "I've seen this movie before, when Obama did the same thing in Iraq."

Engel believes that in both Iraq and Afghanistan, the U.S. military pulled out prematurely and was then forced to go back. In Iraq specifically, the removal of U.S. troops opened a void for ISIS to swoop in, he says.

"It's a little bit like a cancer," Engel says. "If you just leave the last bit in the body, it's going to come back and spread and all the hard work you've done and all the sacrifices and all the pain and suffering and chemo that you've gone through is not going to have been effective."

The State Department said in a statement that the situation in Syria is constantly under review and the agency continues to work with partners on the ground to stabilize the most vulnerable areas.

"The United States is working every day on the ground and with the international community to help stabilize those areas liberated from ISIS and identify ways to move forward with reconstruction once there has been a peaceful political transition away from (Syrian President Bashar al-) Assad," the statement said.

But military officials say Trump's calls to withdraw from Syria "very soon" may be too optimistic. U.S. military advisers told NPR's Tom Bowman in February that it will take another two to six months at least to defeat ISIS and then another year to stabilize the area with humanitarian aid.