Accessibility links
'Look Alive Out There' Elevates Its Anecdotes With Humor And Feeling Sloane Crosley returns to form with her first essay collection in eight years, covering everything from an escalating battle with her neighbor's hip but noisy children to mountain climbing in Ecuador.

'Look Alive Out There' Elevates Its Anecdotes With Humor And Feeling

'Look Alive Out There' Elevates Its Anecdotes With Humor And Feeling 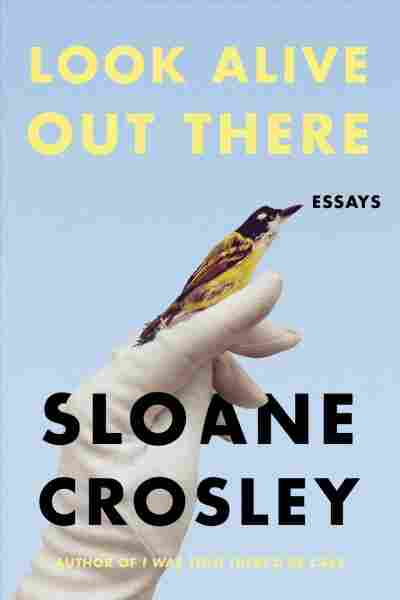 Look Alive Out There

Humorous personal essays may be the equivalent of literary snacks — salty, sweet, and sharp, with just the right amount of bite. But the best do more than satisfy cravings for quick, crunchy pick-me-ups: Their satirical observations provide deeper sustenance by reflecting trenchantly on our broader culture.

After her disappointing first novel, The Clasp (2015), Sloane Crosley has returned to form with a wry new collection of essays, Look Alive Out There. It's been ten years since she reported on the tribulations of Manhattan real estate, bosses from hell, and the duress of friends' weddings in I Was Told There'd Be Cake, and eight years since her followup, How Did You Get This Number, which was filled with mordant accounts of trying to find her bearings as a single working woman coping with distressing roommates and boyfriends.

The 16 essays in Look Alive Out There add up to a portrait of the writer as a hustling full-timer (having quit her job as a literary publicist), working hard to build on her early reputation. Many again find Crosley in awkward, infuriating, or humiliating predicaments. On the home front, there's her hilariously escalating battle with a West Village neighbor's impossibly noisy, enviably hip teenaged children. Further afield, while on assignment for a travel magazine, she sets off on a mountain-climbing expedition in Ecuador for which she is dangerously ill-prepared. And, in a story that's sure to send shivers through readers, she recounts the dismaying experience of having to buy back her eponymous website domain and primary email address after they were auctioned off when she inadvertently let them lapse because her billing notifications were sent to a "graveyard" address she never checks.

This 'Clasp' Doesn't Quite Hold Together

By pursuing her tales of woe beyond riffs and rants, Crosley elevates these foibles above the anecdotal. After paying $4,200 to get her website back — which she calculates is the equivalent of four years of electric bills, 13 good cashmere sweaters, or 1200 cups of coffee — she writes, "I made a mistake and paid for it by wrestling with a pig. Not only did the pig like it, the pig has moved on to other troughs. But I have not." In fact, she arranges to meet this swine in London. And although she describes him as a man with "the moral center of a Cadbury Creme Egg," she also tries to see his point of view. It could be argued that she goes too far in this endeavor: She concludes that he's "not a bastion of ethics, but not wrong. He's taking advantage of a deeply flawed system."

Sanctimony is toxic to personal essays, and Crosley wields its antidote, self-deprecation, with the skill of a practiced EMT. In "Up the Down Volcano," which was originally released as a Kindle Single in 2012, she skewers the negligent Ecuadorian guide leading her up Cotopaxi, but she ultimately blames herself, a chronic underpacker and underplanner, for her miserable brush with altitude sickness: "My predicament could have been easily avoided with some minimal research on my part," she admits. True, but then her story wouldn't have been nearly as good.

Crosley's best essays combine her sparkling verbal facility with a willingness to expose and explore more personal issues, like her mixed feelings about remaining single and childless into her late thirties. She transforms what could have been just a jokey, prurient piece about her mother's cousin, a retired porn star, "the most famous stunt c**k ever," into a searching inquiry about a trait she's afraid she may share with him — a tendency to look for love in all the wrong places. "To live alone can be a glorious thing," she writes in another essay. "But it is possible to have too many rooms of one's own."

There are several negligible pieces whose inclusion hints at a desperation for material, but her two ventures into personal medical history are keepers. In a saga about freezing her eggs — despite ambivalence toward having children — she hopscotches smoothly between wit and wisdom, noting the heartbreaking "naked want" in a fertility clinic, yet also quipping about the learning curve required for self-administered hormone injections: "Freezing your eggs is essentially a cheap way to become a registered nurse."

A prolonged bout with vertigo unleashes fear and testing — along with strings of inspired witticisms, including a system for measuring the severity of medical conditions based on the types of paper clothing you're issued. After being diagnosed with Meunière's disease she observes, "Writing about illness is a form of travel writing" — albeit to an involuntary destination that requires adaptation.

Crosley may suffer from balance issues, but not in her writing. She has that rare ability to treat scrapes with sardonic humor and inject serious subjects with levity and hijinks with real feeling — a sort of unlicensed nurse to our souls. Can't wait to see what she makes of her forties.