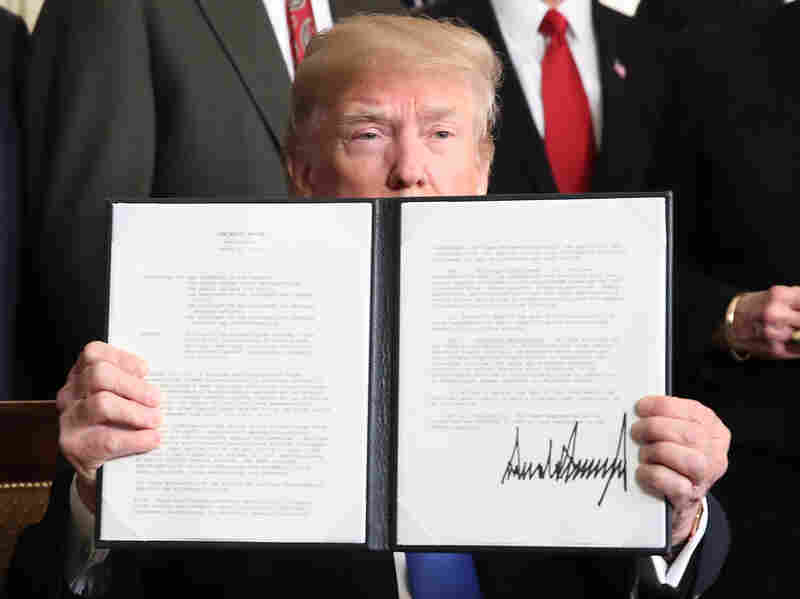 President Trump holds up a signed presidential memorandum aimed at what he calls Chinese economic aggression in the Roosevelt Room at the White House on March 22, 2018. Mark Wilson/Getty Images hide caption 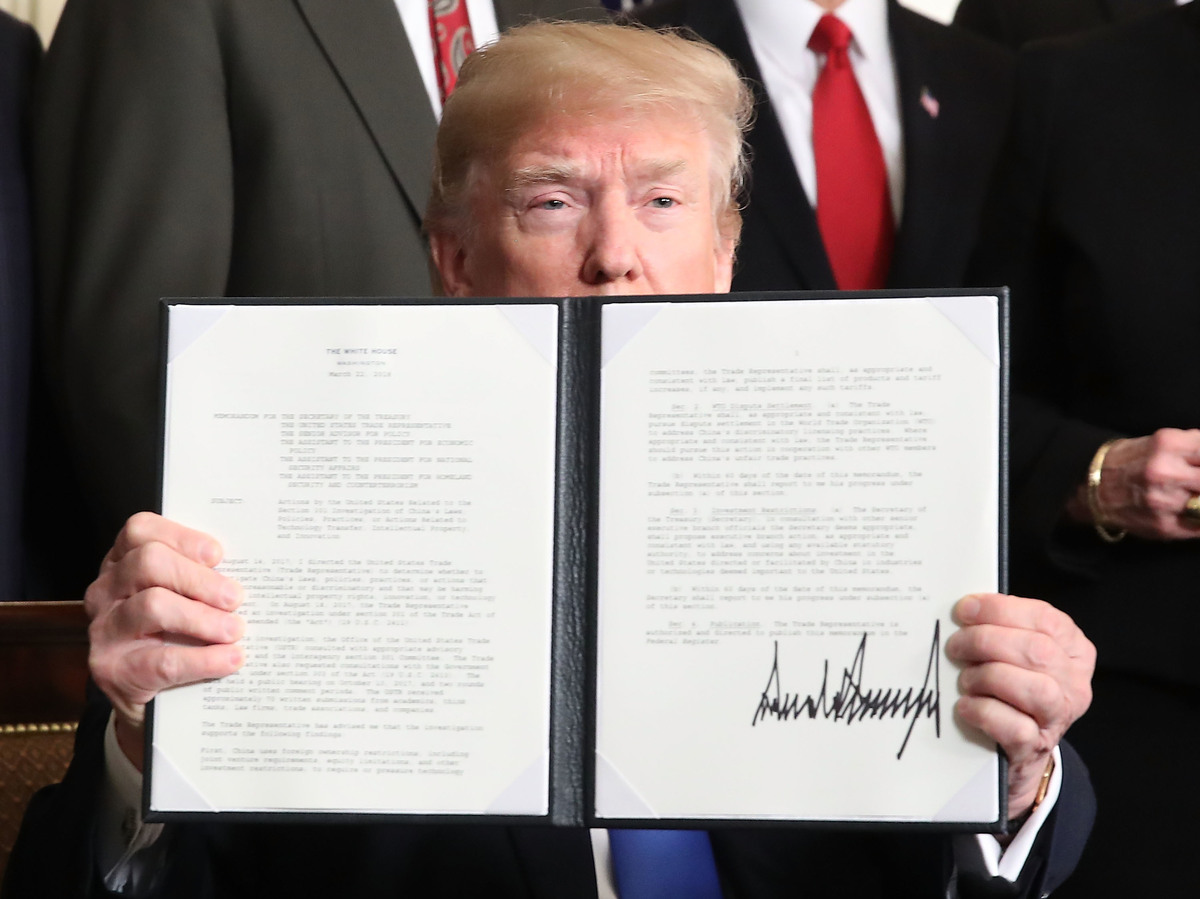 President Trump holds up a signed presidential memorandum aimed at what he calls Chinese economic aggression in the Roosevelt Room at the White House on March 22, 2018.

China responded on Wednesday to the Trump administration's published list of Chinese exports that could soon be subject to a steep 25 percent tariff.

The White House list covers some $50 billion worth of Chinese goods in sectors such as aerospace, robotics, IT and machinery.

China's Ministry of Commerce said Wednesday that it would impose tariffs of 25 percent on 106 types of U.S. products worth $50 billion, including soybeans, aircraft and automobiles. There was no indication of when the new tariffs would take effect. The Commerce Ministry also said it had opened a dispute against the U.S. at the World Trade Organization.

"It must be said, we have been forced into taking this action," a deputy commerce minister, Wang Shouwen, said at a news conference, according to The Associated Press. "Our action is restrained."

China's commerce ministry said it has initiated a World Trade Organization dispute procedure against the U.S. 301 tariffs investigation on Wednesday, amid an escalating trade dispute between the world's two largest economies.

Last month, President Trump directed his trade advisers to develop the list as a way to punish China for what the White House calls unfair treatment of American intellectual property. Trump has also ordered his treasury secretary to weigh new limits on Chinese investment in the United States.

The list of tariff targets was made public after the market closed on Tuesday. News of retaliatory tariffs from China on $3 billion worth of U.S. goods contributed to sharp sell-off on Wall Street Monday.

The administration will solicit written comments on the proposed tariff targets through May 11 and hold a hearing on May 15. Supporters and opponents began weighing in as soon as the list was released.

"As the Chinese saying goes, it is only polite to reciprocate," the statement continued. "The Chinese side will resort to the WTO dispute settlement mechanism and take corresponding measures of equal scale and strength against U.S. products in accordance with Chinese law."

The U.S. Chamber of Commerce said it shares the president's concern with China's conduct but warned tariffs would simply raise prices on U.S. consumers and businesses.

"The administration is rightly focused on restoring equity and fairness in our trade relationship with China," said Myron Brilliant, executive vice president and head of international affairs at the chamber. "However, imposing taxes on products used daily by American consumers and job creators is not the way to achieve those ends."

The targeted items were chosen in an effort to minimize the impact on ordinary consumers. But that did little to mollify critics.

"While we are pleased that many everyday products such as clothing and shoes are not on the list, we remain concerned that other goods such as consumer electronics and home appliances are targets," said Matthew Shay, president of the National Retail Federation. "As we've said all along, tariffs are taxes on consumers and a drag on the nation's economy."

The Alliance for American Manufacturing — a coalition made up of U.S. steel manufacturers and the steelworkers union — was more encouraging.

"If China doesn't play by the rules, it should lose some of its access to the U.S. market," said alliance president Scott Paul. "Otherwise, nothing will change and American jobs will continue to suffer at the hands of Beijing's practices."

The U.S. had a $337 billion trade deficit with China last year, 9 percent larger than the year before. Excluding services, where the U.S. enjoys a surplus, the trade deficit was $375 billion.

American businesses have long complained about being forced to partner with Chinese firms and share their technology as a price of doing business in the fast-growing Chinese market. China has pledged to halt such forced technology transfers. But similar promises in the past have gone unmet.

The tariffs on China are the latest in a series of protectionist moves announced by the administration in recent weeks. The White House also ordered tariffs on imported solar panels, washing machines and steel and aluminum, though it granted temporary exemptions from the steel and aluminum levies to some of the country's biggest trading partners.

Experts say the glut of steel and aluminum on the world market is largely a product of over-production in China, although China is not a large, direct supplier of those metals to the U.S.

On Monday, China announced tariffs of its own on exports from the U.S. including pork, nuts and sparkling wine. Although the immediate impact of those tariffs was limited, they fueled concern about an escalating trade war.