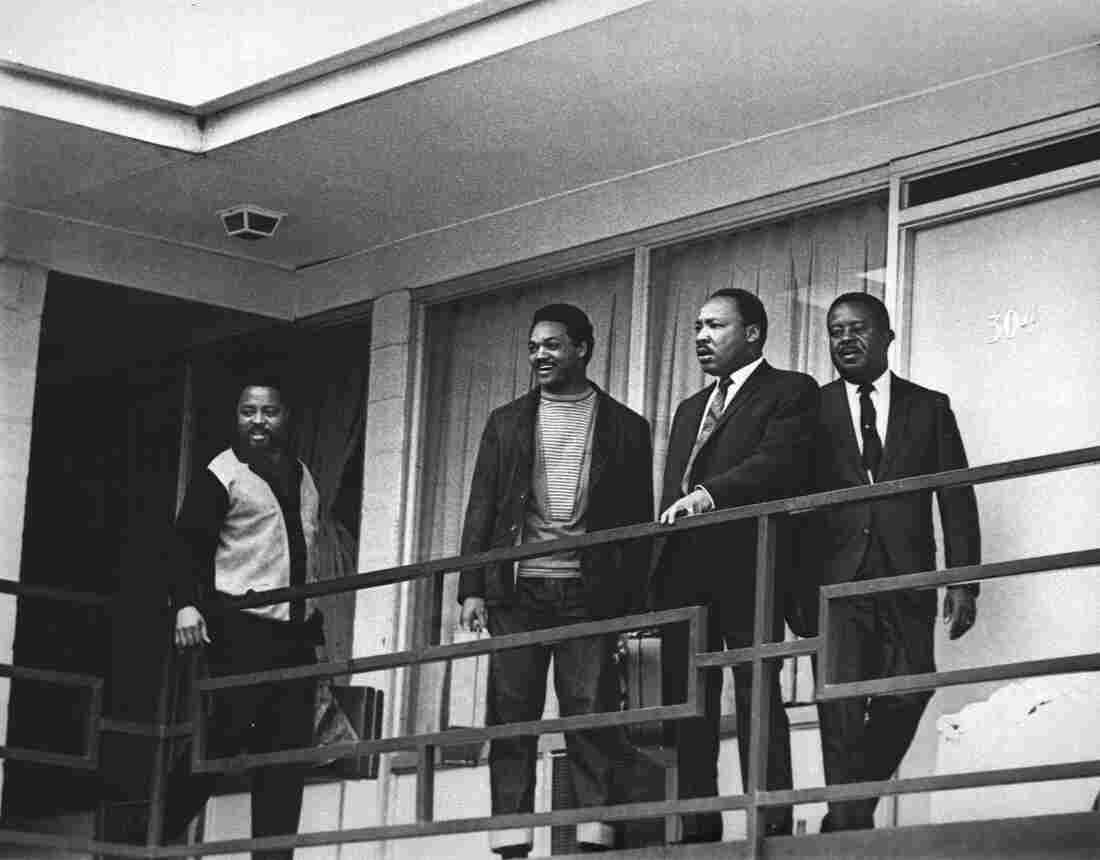 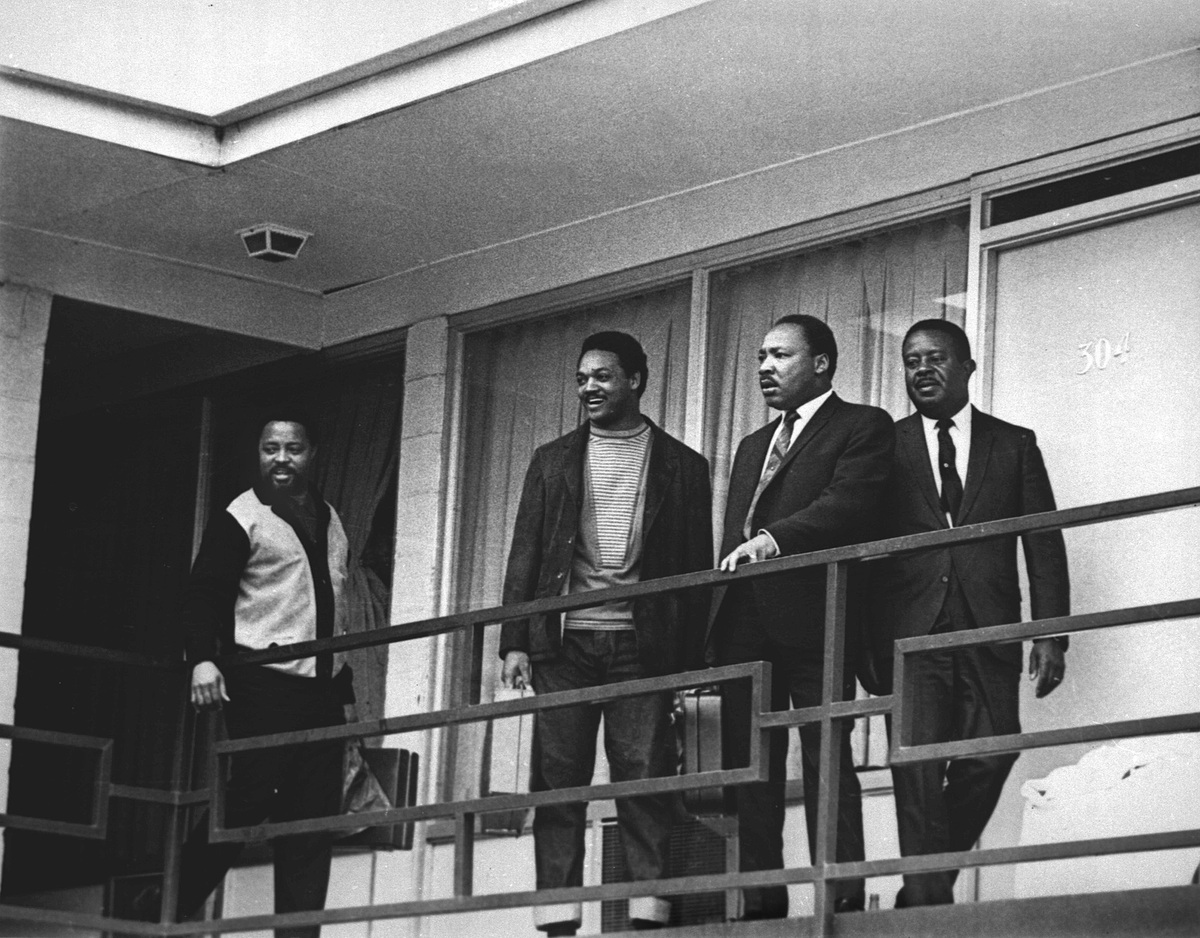 Martin Luther King Jr. stands with fellow civil rights leaders on the balcony of the Lorraine Motel in Memphis, Tenn., on April 3, 1968 — one day before he was assassinated while standing in approximately the same place. From left are Hosea Williams, Jesse Jackson, King and Ralph Abernathy.

When Martin Luther King, Jr. flew from Atlanta to Memphis on the morning of April 3, 1968, he was not in a particularly good state of mind.

"While the plane was about to take off, there was a bomb threat that was specifically targeted at King and that delayed the departure of the flight," says Joseph Rosenbloom, author of the new book Redemption: Martin Luther King Jr.'s Last 31 Hours. "They brought dogs onto the plane, they evacuated the passengers. And so the plane arrived an hour or so late in Memphis."

That violent threat seemed to really get to King. He was used to threats, but he felt like this one in particular might be a sign of something terrible to come.

King was also haunted by his prior visit to Memphis less than a week before, when he had led a march of striking sanitation workers. It turned violent, which went against his deep commitment to non-violence. Rosenbloom says that this really got to King.

"He was enormously distressed and despairing," Rosenbloom says. "Some of his aides said that they've never seen him more depressed than he was at that time. He even thought for a moment that he should scrap the Poor People's Campaign altogether because it was so harmful to his credibility." 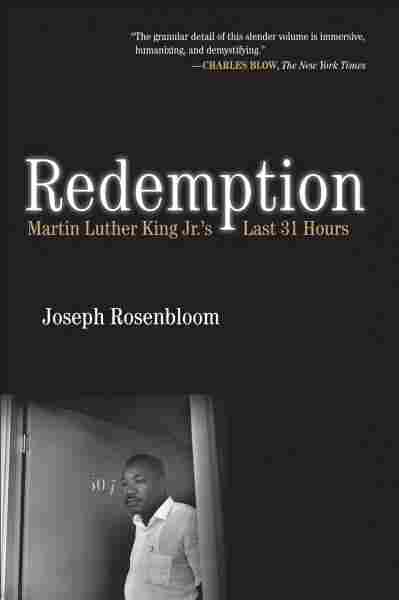 The Poor People's Campaign was a march on Washington that King was planning in order to highlight the plight of poor people. Even some of his closest friends and advisors told him it wasn't a good idea.

In Memphis, he faced more opposition from a group of young civil rights activists — primarily young black men — who didn't really respect him.

"That's the local black power group," Rosenbloom says. "They call themselves The Invaders. And they didn't have a very high regard for King. They were black nationalists. At least in their rhetoric, they espoused a lot of violent talk. So they differed with King. They thought his nonviolent movement was ineffective, that it was not aggressive enough."

But King still did what he was known for: He tried to rally a crowd with a speech. On the night of April 3, he spoke at the Mason Temple in Memphis.

This speech, maybe reflecting his mindset, was a little different.

"That speech is best remembered for the finality," Rosenbloom says. "In the finale, he turns to his own mortality. He talks about his dread of dying a violent life. He was really quite terrified."

That speech is now known as "I've Been To The Mountaintop." Near its end, King said: "Like anybody, I would like to live a long life. Longevity has its place. But I'm not concerned about that now. I just want to do God's will. And he's allowed me to go up to the mountain."

"It seemed to take all the air out of him," Rosenbloom says. "He almost collapsed — he had to be helped to his chair at the back of the platform. He seemed deflated, he seemed utterly spent. I think the emotion of the day — starting with the bomb threat, and all the exertion of coming to the Mason Temple even though he was exhausted — I think all that had taken a toll on him."

The next day, King was on the balcony of his motel, about to head to dinner, when he was shot and killed. It was 31 hours after he had landed in Memphis.

The audio for this story did not broadcast on Morning Edition due to news events, but we wanted to share it with you anyway. Because it did not air, no transcript will be provided.