Accessibility links
'A Quiet Place' Will Leave You Shhhhhhaken Director John Krasinski's tense, well-acted horror film is about a family attempting to survive an invasion by terrifying creatures who hunt via sound. 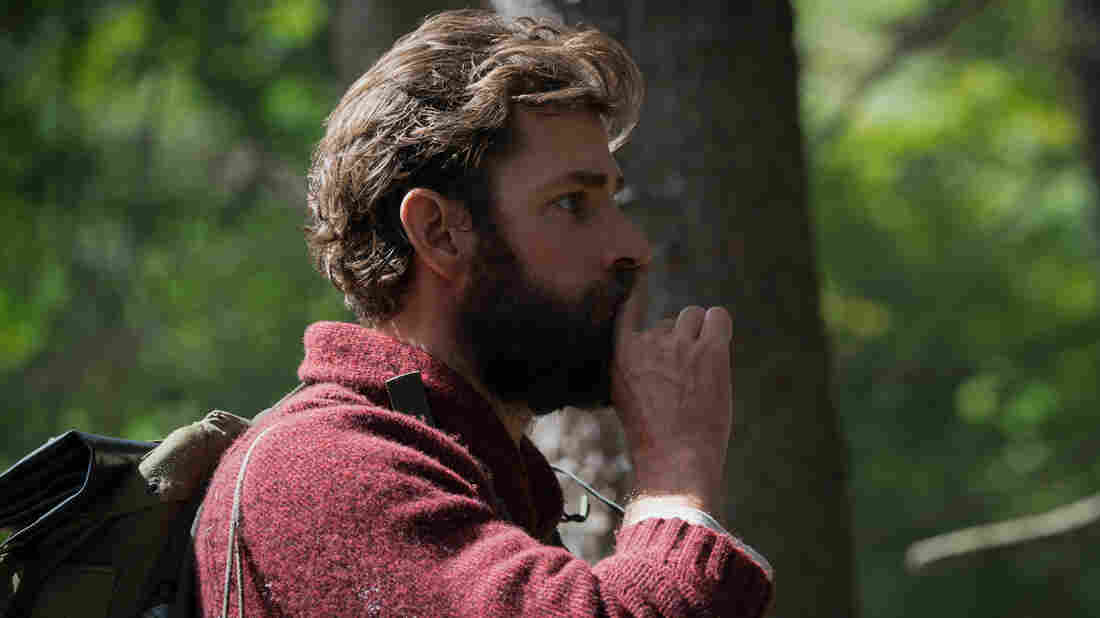 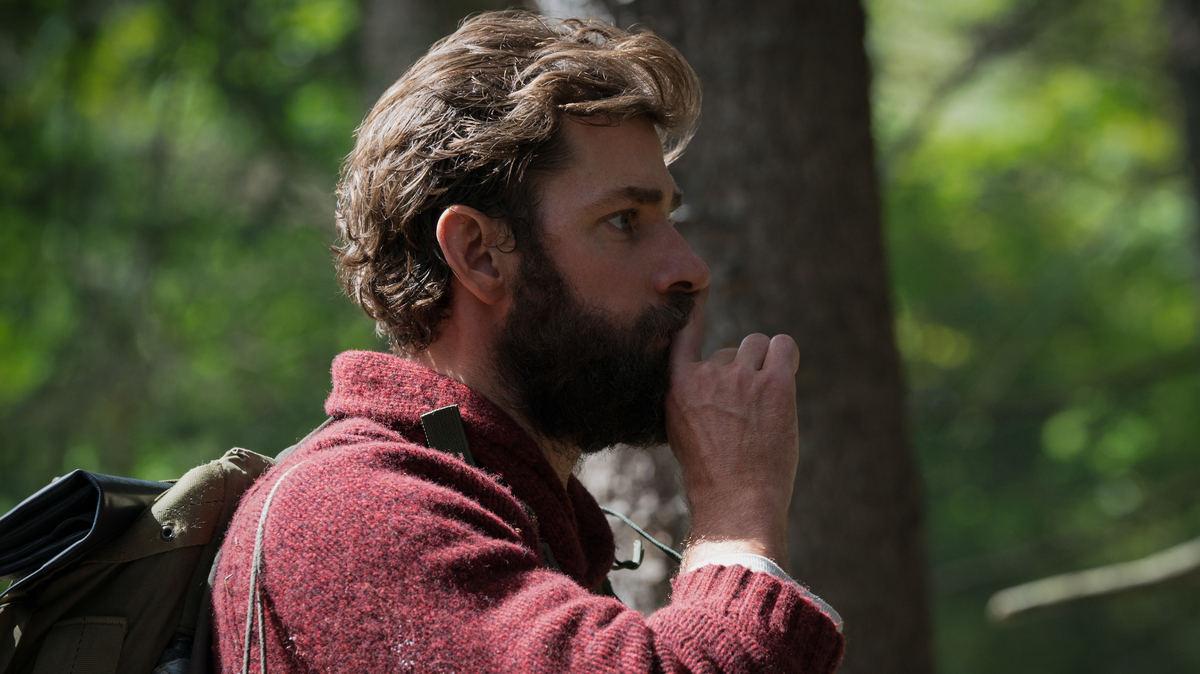 Quiet On The Set Piece: John Krasinski directs, co-stars, and co-writes A Quiet Place, a thriller that leverages silence for scares.

Limitations are a horror filmmaker's best friend, whether it's confining characters to a haunted house, constructing a forest menace out of shaky "found footage," waiting until the third act to show the shark, or starving the senses in order to heighten them. A Quiet Place is about a wave of blind, deadly arachnid creatures that are sensitive to sound — imagine if the aliens in the Vin Diesel film Pitch Black were deposited on earth, more or less — but it's really about isolating an effect and custom-fitting a story around it. When a single utterance or unintended noise means quick and certain death, the audience will hang on every bump of the soundtrack, like a heart patient eyeing an EKG.

There are high-minded ways to interpret A Quiet Place, which develops into an affecting metaphor for the perils of parenthood, but it's effective primarily as a back-to-basics statement of genre fundamentals. We're so accustomed to being pummeled into submission by studio soundtracks that the deprivation here has a clarifying effect, reminding us of what's possible when sound and music is carefully placed. That the film comes from Platinum Dunes, the production company of Transformers director Michael Bay, feels like an act of penance from Hollywood's chief supplier of ear-splitting rackets.

'13 Hours' Finds Fodder For Action, But Not Thought, In Recent History

The unlikely frightmaster responsible for A Quiet Place is John Krasinski, best known as Jim from The Office and less well-known for Brief Interviews with Hideous Men and The Hollars, his mediocre forays into independent filmmaking. Krasinski starred in Bay's thriller 13 Hours: The Secret Soldiers of Benghazi, and Bay has returned the favor by allowing him to merge the quiet, character-driven qualities of his indie films with the sledgehammer impact of a mainstream shocker. Krasinski lands on a loud-quiet-loud formula akin to '90s alternative rock: When the chorus kicks in, the jump-scares really pop.

By Day 89 of the invasion, an entire planet of loudmouths has seemingly been winnowed down to one family wandering through a Cormac McCarthy apocalypse. The Abbotts—Lee (Krasinski), Evelyn (Emily Blunt), and their three children — are first shown tiptoeing around a general store in bare feet, culling medications and other essentials they need for their journey. (Sorting through pills bottles, in this context, is like dangling your toes in piranha-infested waters.) After a deadly encounter, the film cuts to roughly a year later, when the family is holed up in a farmhouse and expecting a new addition.

Bringing a newborn into a world where noise can kill brings another dimension to the phrase "planned parenthood," and there will no doubt be arguments over the wisdom of Lee and Evelyn's decision, just as there are over victims running up the stairs in a slasher film. Rest assured, the Abbotts have thought it through completely, but even the best-laid plans can't account for, say, an errant nail on the basement stairs or an ill-timed plumbing issue. And once the creatures' attention is roused, they have a tendency to stick around until they find the source and tear it to shreds.

A Quiet Place operates like a more wide-open version of Don't Breathe, the superb Fede Álvarez thriller from two years ago about three robbers invading the home of a blind veteran. Krasinski doesn't have Álvarez's penchant for atmosphere and calculated aggression, but he comes close enough, and the performances make up much of the difference. Blunt is particularly good as an expectant mother turned reluctant warrior, but the entire cast works hard to humanize characters who could just as easily be waved around as flesh-colored arachnid bait.

Embedded in the film's story is a touching truth about how the parental instinct to protect children from the dangers of the world don't always square with reality. As much as Lee and Evelyn fret over the logistics of a new baby —common questions like "Bottle or formula?" or "Cloth diapers or disposable?" are not as pressing here — they also have to deal with two older kids who are pushing the boundaries and testing their independence. We may not recognize the monsters that lurk around every errant peep in A Quiet Place, but the world outside the theater has plenty of its own.