Accessibility links
Worried Parents Go Off Half-Cocked In 'Blockers' A teen sex comedy from the worried parents' point of view, Blockers smartly skewers, in a raunchy, silly and strangely empathetic way, the neediness of the helicopter parent. 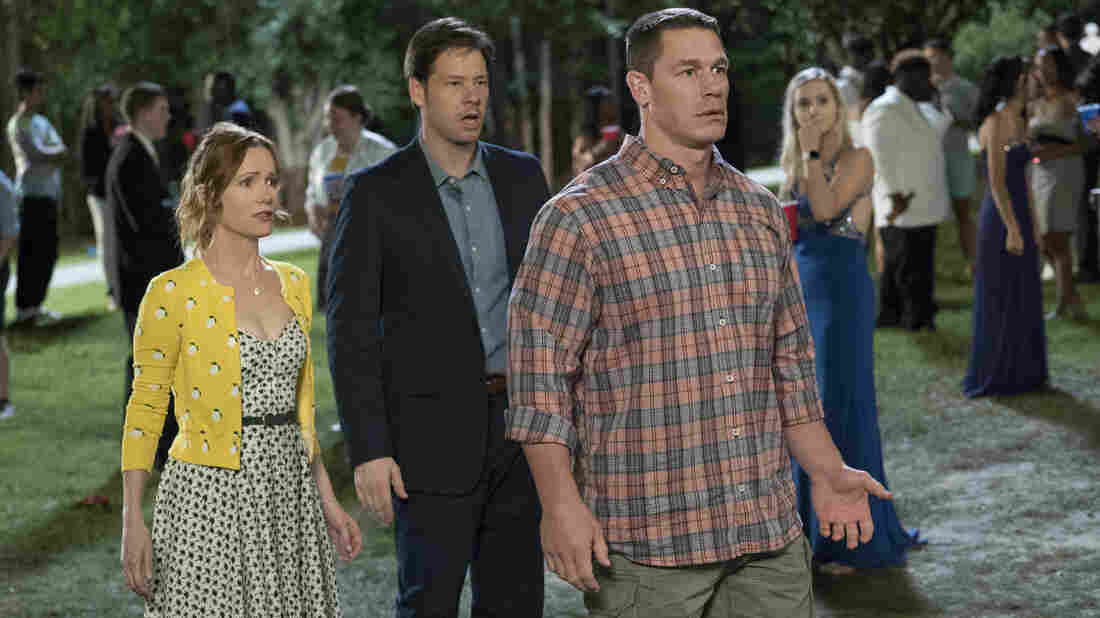 Against Prom-iscuity: Leslie Mann, Ike Barinholtz and John Cena take it upon themselves to prevent their daughters from having sex on Prom Night in Blockers. Quantrell D. Colbe/Universal hide caption 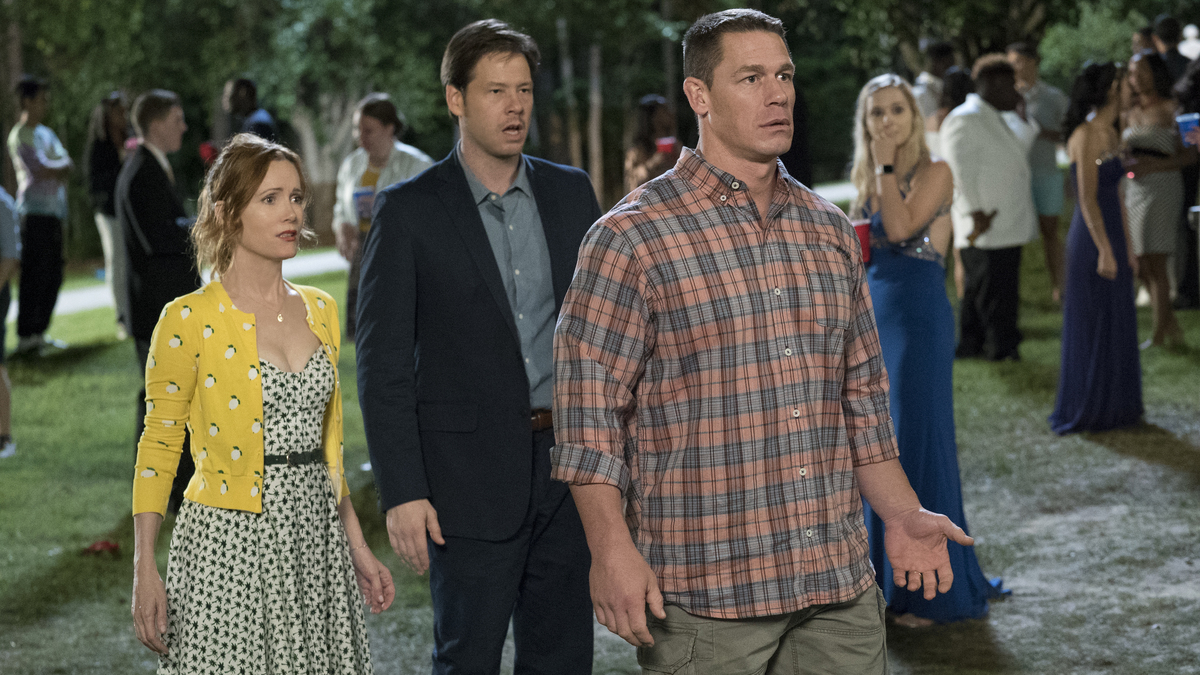 Against Prom-iscuity: Leslie Mann, Ike Barinholtz and John Cena take it upon themselves to prevent their daughters from having sex on Prom Night in Blockers.

Parents get a raw deal in most teen sex comedies, because they tend to be killjoys for characters and audiences alike. No one wants to think about the fact that the logical endpoint of discovering sex is becoming a parent. All cinematic high schoolers in the 1970s and '80s seemed to be emancipated, and the whole joke of Eugene Levy and Jennifer Coolidge in the American Pie movies was that the existence of their libidos made for easy punchlines among embarrassed offspring.

Thankfully, here comes Blockers, a teen sex comedy from the parents' point of view. It's the whole "prom night sex pact" deal, and the moms and dads of wealthy Chicagoland are naturally terrified at the prospect of their daughters losing their virginity and, with it, the last scraps of childhood that made them dependent on their parents in the first place. The easy flipping of the protagonist roles feels so novel that it's amazing no one's done it before with this level of talent.

The film is socially progressive in tone, but delivers the big, broad hijinks of a Seth Rogen movie. No surprise, then, that Rogen and his writing partner Evan Goldberg are among the producers. But the film's most noticeable talents, both in front of and behind the camera, are largely folks who aren't yet household names (with one big exception we'll get to in a minute). A good thing, too, because as much attention as Rogen's "dad bod" got in the Neighbors movies, he was actually a pretty unconvincing dad.

'Pitch Perfect': In Tune Where It Counts Most

Staying In Tune Isn't So Easy In 'Pitch Perfect 2'

The three parents at the center of Blockers, though, carry the right degree of love and protectiveness that can easily tip the scale into full-on insanity. Leslie Mann's single mom Lisa clings to her daughter Julie (Kathryn Newton) like the life-preserver saving her from dying alone; Ike Barinholtz's divorced dad Hunter, desperately trying to be cool, drives daughter Sam (a very good Gideon Adlon) away at every turn; and America's golden boy John Cena once again demonstrates his rubber-faced comic chops as a khaki-shorted, military-minded protector to the sporty Kayla (Geraldine Viswanathan). After the three of them send off their loved ones in the Stretch Limo of Doom, they become privy to a group text outlining the girls' R-rated plans for the night ... entirely in emojis, necessitating some detective work about what that clown face might actually mean. Fueled by paranoia and some antiquated ideas about young women, the 'rents set off to do the thing that puts the rooster on this movie's poster next to the title.

In addition to the sight of moms and dads sticking things up their butts for the good of their children, the other noteworthy feature of Blockers is the way it allows the young women at its center to take charge of their own sex lives. Director Kay Cannon, a writer and producer on the Pitch Perfect films making her helming debut, juggles six different storylines with varying success. But she gives the three daughters at the movie's core a free-spirited charm, allowing each character to pursue what makes her happy in turn. Julie wants to seal the deal with her boyfriend; Kayla wants a quick-and-dirty hookup with the school, er, alternative pharmacist; and Sam is a closeted lesbian who's brought along a fedora'd dork as her date in the spirit of "don't knock it 'till you've tried it." They all come to thoughtful and honest realizations about their desires, and the film never looks down on them. One side character chides the three parents about gender double-standards, but we honestly would've gotten the point without the lecture.

As with most studio comedies that just seem to emerge from the two-car garages of suburbia, Blockers has no visual imagination. Its structure is also a little mushy, even in the midst of some funny comic set-pieces: The biggest laugh-out-loud bit involves some blindfolded nude games, which the film cheats in order to escape from. But the real thrust (sorry) is the intelligence with which it approaches its parental absurdity. Barinholtz's Hunter may be a vulgar cartoon, but he also has correctly intuited his daughter is gay, and the actor is very good at projecting an understanding that is cloaked in neediness. Cena's strongman persona never fails to elicit guffaws, and Mann keeps finding novel, slightly horrifying ways to contort her character's anxieties. Taken together, they let us think about sex intelligently while still being very, very silly about the whole thing. These are helicopter parents who truly, painfully believe: To block is to love.