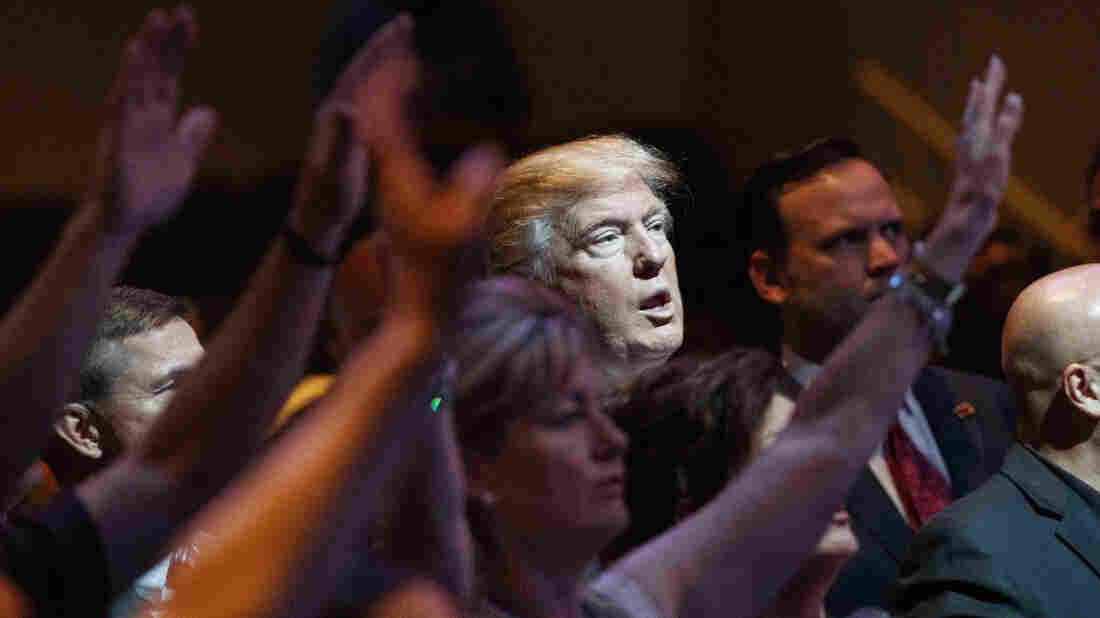 White evangelicals fueled Donald Trump's campaign, but some worry about recent sex scandals and the effect they could have on the midterms. Evan Vucci/AP hide caption 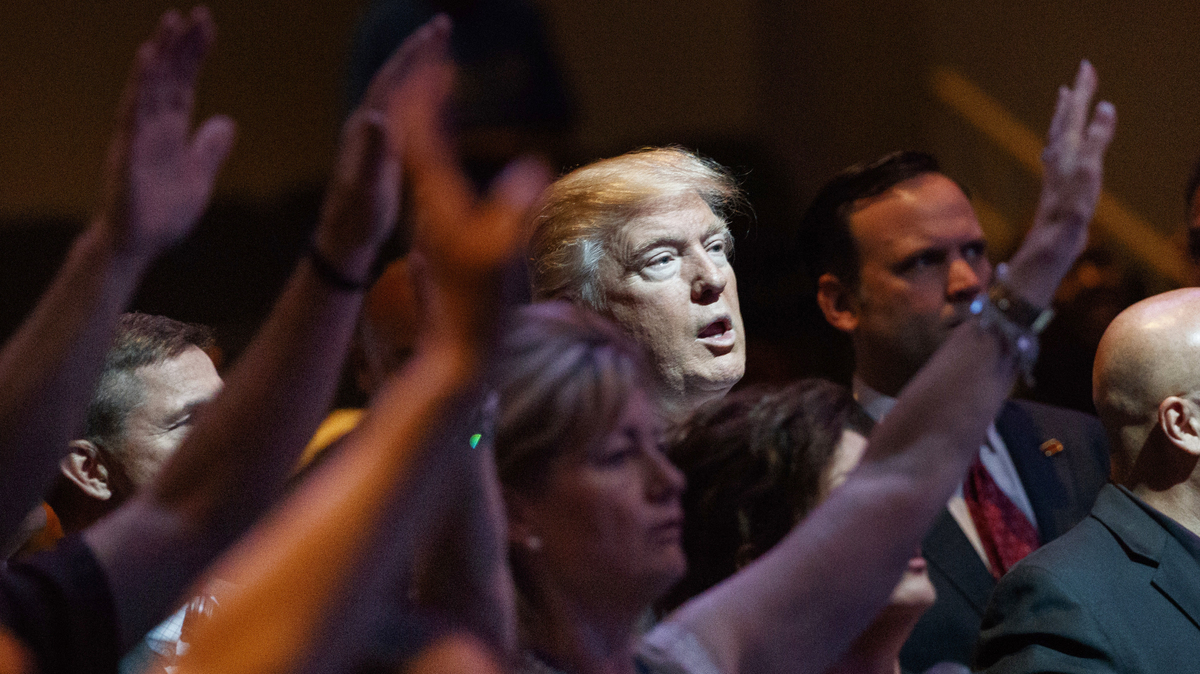 White evangelicals fueled Donald Trump's campaign, but some worry about recent sex scandals and the effect they could have on the midterms.

"We're very concerned" about the allegations, said a leader of a faith-based ministry. The leader is involved in hosting the gathering, which organizers are aiming to take place June 19 at Trump International Hotel in Washington, D.C. The source said the combination of the Stormy Daniels sex-scandal allegations and Trump's continued reputation for divisive rhetoric could suppress evangelical turnout in the November midterm elections.

"It is a concern of ours that 2018 could be very detrimental to some of the other issues that we hold dear," like preserving religious liberty and restricting abortion rights, the source noted. The source, like the others with knowledge of the event, spoke to NPR on the condition of anonymity so as to not jeopardize the meeting.

Trump has denied Daniels' allegations. Speaking with reporters on Air Force One on Thursday, he also denied knowing about the payment that his attorney, Michael Cohen, made to Daniels, whose real name is Stephanie Clifford, days before the 2016 presidential election. She alleges she was paid $130,000 not to talk about the alleged affair.

Sources say organizers are working to firm up planning for the daylong event with the White House before sending invitations to hundreds of conservative Christian pastors and political leaders in the coming days.

A White House spokesman declined to comment on Thursday.

Trump has been invited to take questions from the evangelical leaders for roughly 90 minutes during the meeting. It's not clear whether the allegations from Daniels — or another woman who alleges she had an affair with Trump, former Playboy model Karen McDougal — are likely to come up while the president is on stage in a more open session.

But a source said the president is likely to be asked about the women during private discussions in at least a "sidebar conversation."

The ministry leader said Trump's tone and personal life remain a concern for many evangelicals.

"There's things that are like fingernails on the chalkboard to people of faith. That's not who we are; that's not a 'fruit of the Spirit'; that's not leading with humility," the source said, referencing a passage in the New Testament book of Galatians that describes the character traits Christians exhibit.

The meeting is part of an effort to rally and reassure conservative voters, especially white evangelicals who fueled Trump's run to the White House, ahead of this year's midterms. But it also could raise questions about the ethics of holding such events, organized through the White House, at Trump's hotel just a few blocks from the White House.

That prospect did not seem to concern the evangelical leaders involved with booking the event.

"That doesn't even cross our mind," said one person with knowledge of the planning, adding that the hotel was chosen because "this is probably the best deal in D.C."

A chance to "reconvene" and "encourage enthusiasm"

On issues like abortion, religious freedom and Israel policy, many conservative Christians say Trump has followed through on his campaign promises. One source noted that many white evangelicals voted for Trump in 2016 with the knowledge that "with Trump, it was going to be a gamble" but with no hope that Democrat Hillary Clinton would deliver on any of their top-priority issues.

Many Republicans fear 2018 will be a wave election for Democrats, who've been organizing in opposition to Trump. Trump has battled low approval ratings, and some polls have suggested support for this president has declined among white evangelicals, a key voting block for Republicans.

The June meeting will be a chance for evangelical leaders to seek reassurance from Trump and to talk about how to mobilize conservatives around other issues this fall, a source said.

"Let's reconvene," the source said, "and let's see what we can do to encourage enthusiasm — beyond Trump, so to speak."

Such a meeting with the president would mirror a similar event held two years ago, when hundreds of mostly white evangelical Protestants gathered at a New York hotel to meet with then-candidate Trump.

The purpose of that gathering was largely to reassure evangelicals concerned about the presumptive Republican nominee's reputation for vulgarity and his multiple marriages. It was a few months before the revelation of the Access Hollywood tape in which Trump could be heard bragging about groping women's genitals without their consent.

It was a "pivotal moment" in Trump's 2016 campaign, said Ken Blackwell, a conservative activist who advised the Trump transition team. Many evangelical leaders had backed other candidates in the Republican primary, including Texas Sen. Ted Cruz and Florida Sen. Marco Rubio.

"It's an element of his base that can be mobilized quickly," Blackwell said. "It is organized, as was demonstrated in the 2016 elections. It is a block of voters that will make a difference in outcomes, if they turn out [in 2018]."

In addition to meeting with Trump, participants also plan to spend several hours discussing priorities and strategy for the midterms, which could include inserting reminders in church bulletins to head to the polls on Election Day.

Another source with knowledge of the plans for the event tells NPR that the gathering will encourage pastors and other leaders to frame voting as a Christian's "civic duty," rather than urging churchgoers to support a particular political party.

That said, white evangelicals overwhelmingly favor Republican candidates at the polls. Whatever their misgivings, 81 percent of self-identified white evangelicals voted for Trump in the November 2016 election. Recent polls suggest a majority still back Trump despite the Daniels allegations, though his popularity with the group took a dip when the news initially broke.

The source with knowledge of plans for the June meeting told NPR that organizers have worried that some evangelicals might avoid the event because of the Daniels controversy.

"For some evangelical leaders," the source said, "it's a liability."

But others, including Penny Nance of Concerned Women for America, expressed optimism that the president will weather the Daniels storm.

"I just honestly don't hear hand-wringing over the issue," Nance said. "They're not surprised; they made that decision a long time ago. This president is not Rick Santorum or Mike Huckabee; he doesn't pretend to be a Bible-banging evangelical."

Ralph Reed, chairman of the Faith and Freedom Coalition, also said it's "highly dubious" that the allegations will substantially erode support for the president or suppress midterm turnout.

Reed said he will attend the meeting with the president if the planning moves forward. Given how organized and energized Democrats are this year, he said it's important for evangelical leaders to rally their base.

"If these folks don't turn out in record numbers in 2018," Reed said, "it's gonna be a long night for Republicans."

Johnnie Moore, an informal evangelical adviser to Trump, downplayed the discussions, calling them "entirely conceptual" at this stage.

Moore described himself as an "observer" rather than an organizer but did say conversations are underway about a potential gathering of hundreds of evangelicals in Washington, D.C., in the coming months.

"There is a very active discussion about the desire of evangelical leaders to get together again, principally to discuss policy issues going into 2018. And it has nothing to do with any questions about the past life of our president."

Moore noted that many conservative Christians are pleased with Trump's policy record so far and are eager to talk about "what's next" for their policy priorities.

"What I think will happen if there is a meeting and he participates," Moore said, "I think there will be one heck of a celebration."