Accessibility links
Sanctions On Russia Allege A Story Of Power, Money And Corruption The Treasury Department's announcement of new sanctions on powerful Russians describes a global soap opera about power and money at the highest levels. 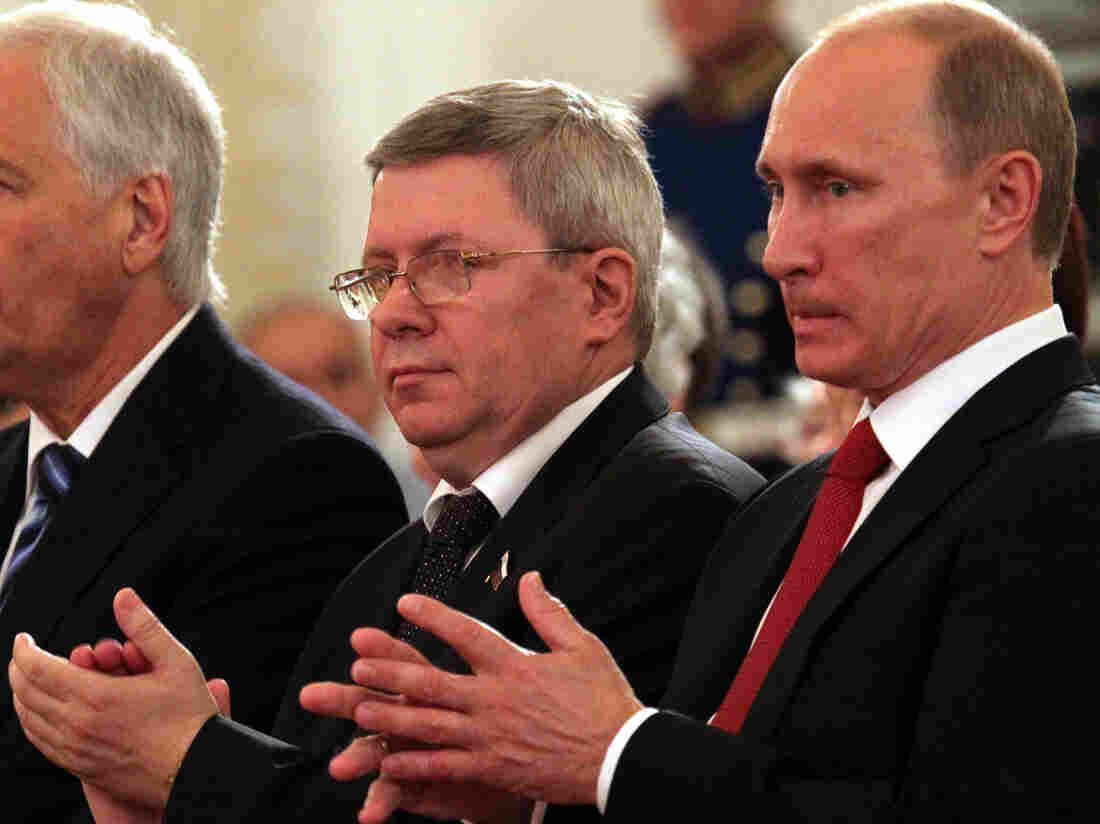 Russian politician Alexander Torshin, with Russian leader Vladimir Putin, is one of a number of powerful Russians sanctioned by the United States on Friday. Konstantin Zavrazhin/Getty Images hide caption 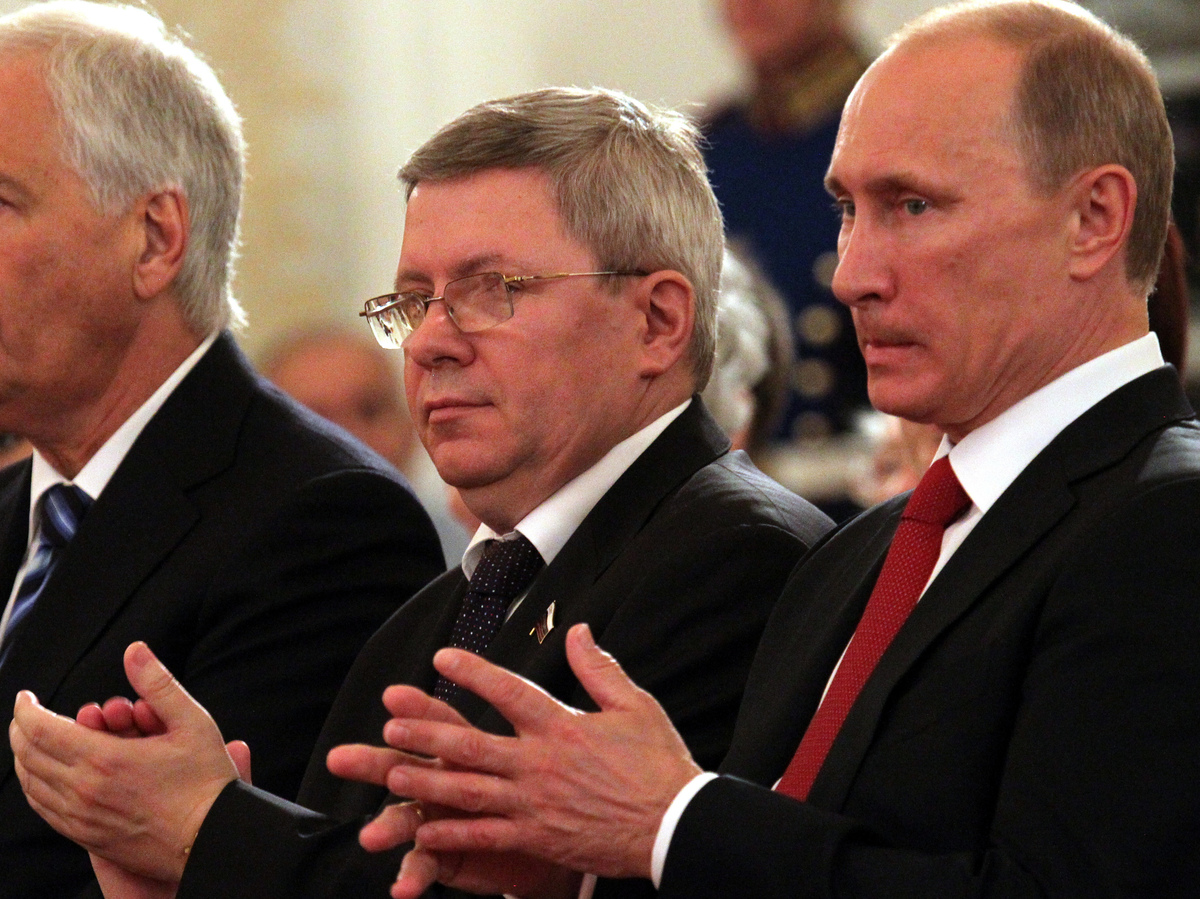 Russian politician Alexander Torshin, with Russian leader Vladimir Putin, is one of a number of powerful Russians sanctioned by the United States on Friday.

The Treasury Department wove a sprawling epic about global power and money on Friday in announcing new sanctions that target some of Russia's most powerful men — including three with ties to Trump world.

The announcement included everything necessary for a first-class soap opera, from arms trafficking to organized crime to the smuggling of millions in cash in suitcases.

Treasury Secretary Steven Mnuchin said the time has come for the United States to shine a light on what Russia is doing:

"The Russian government engages in a range of malign activity around the globe, including continuing to occupy Crimea and instigate violence in eastern Ukraine, supplying the Assad regime with material and weaponry as they bomb their own civilians, attempting to subvert Western democracies, and malicious cyber activities," Mnuchin said. "Russian oligarchs and elites who profit from this corrupt system will no longer be insulated from the consequences of their government's destabilizing activities."

The restrictions on their ability to use American banking, do business in the United States or have other dealings with U.S. institutions are the latest punitive measures imposed by the West in view of what it calls Russia's pattern of aggressive conduct.

Moscow has responded in kind, including by ejecting an equal number of intelligence officers as those kicked out by the United States and several European governments following the poisoning attack of a former Russian spy and his daughter in the United Kingdom.

On Friday, the Treasury Department depicted a web of official, semiofficial and ostensibly nonofficial servants of Russian state aims — and people who slide along the scale:

The Treasury Department's singling out of Kerimov for allegedly smuggling cash out of Russia followed a report this week by CNN that said Justice Department special counsel Robert Mueller's office has been interdicting wealthy Russians as they fly into the United States in order to interview them about potentially transporting cash.

If Russia funneled money to American political campaigns or organizations as part of its attack on the 2016 election, one way it might have done so is by simply smuggling paper dollars in order to avoid electronic transfer records.

Foreign contributions are barred in U.S. elections. So cash could have been shipped to the United States and seeded with political groups or individuals to make the money appear to be legitimate contributions, according to the CNN report.

Kerimov's alleged technique of purchasing of "villas" to launder his money also comports with questions that Trump opponents have asked about his business relationships with wealthy foreigners.

One way in which illicit money allegedly moves out of Russia is via real estate. A rich person buys property in the West — in London, New York or South Florida — without living in it. Instead, hot real estate markets in those places make it simple to resell a condo or a mansion and free up legitimate cash. In Kerimov's case, he was allegedly using this scheme in the south of France when he was arrested in Nice last year.

In 2008, Donald Trump sold an estate he had purchased for around $42 million in Palm Beach, Fla., to Russian tycoon Dmitry Rybolovlev for $95 million. Rybolovlev then subdivided the property and began to sell it off as separate parcels, recouping some of the difference.

Sen. Ron Wyden, D-Ore., an opponent of Trump, has asked Mnuchin and the Treasury Department to provide information about that sale as part of Congress' job to "follow the money and conduct a thorough investigation into any potential money laundering or other illicit dealings" Trump may have had.

Trump and his associates deny any wrongdoing or business relationships with Russians.

Russia's active measures against the United States ranged from the theft and release of embarrassing political emails to social media agitation on Facebook and Twitter to exploratory cyberprobes of state elections systems.

They involved a web of intermediaries and cutouts in the same way as the practices described by the Treasury Department sanctions. Government cyber operatives stole emails from the Democratic National Committee and other victims but used purportedly independent actors — the now-shuttered Russian-created website DCLeaks or the anti-secrecy website WikiLeaks, which endures.

In June 2016, when Manafort, Trump Jr, and Jared Kushner met with a delegation of Russians in New York City after what emails to Trump Jr. described as an offer of help by the Russian government, none of the people they hosted were Russian government employees.

Trump Jr., Kushner and Manafort all have denied conspiring with the Russian attack on the election. Manafort is facing federal charges that allege he acted as an unregistered foreign agent and laundered money, but he is not charged with conspiring with Russians who were attacking the election.

Manafort has pleaded not guilty and has sued the government asking to dismiss the case.

There are geopolitical implications to Friday's sanctions announcement beyond the U.S.-Russia investigation. For example, the targeting of Russia's lucrative state arms exporter, Rosoboroneksport, could complicate its ability to sell weapons to clients such as the Syrian government.