Accessibility links
What We Mean When We Talk About 'Suburban Women Voters' "Suburban women" have been a political fixation for decades. "We're really talking about ... relatively educated and affluent whites," said one Republican strategist. 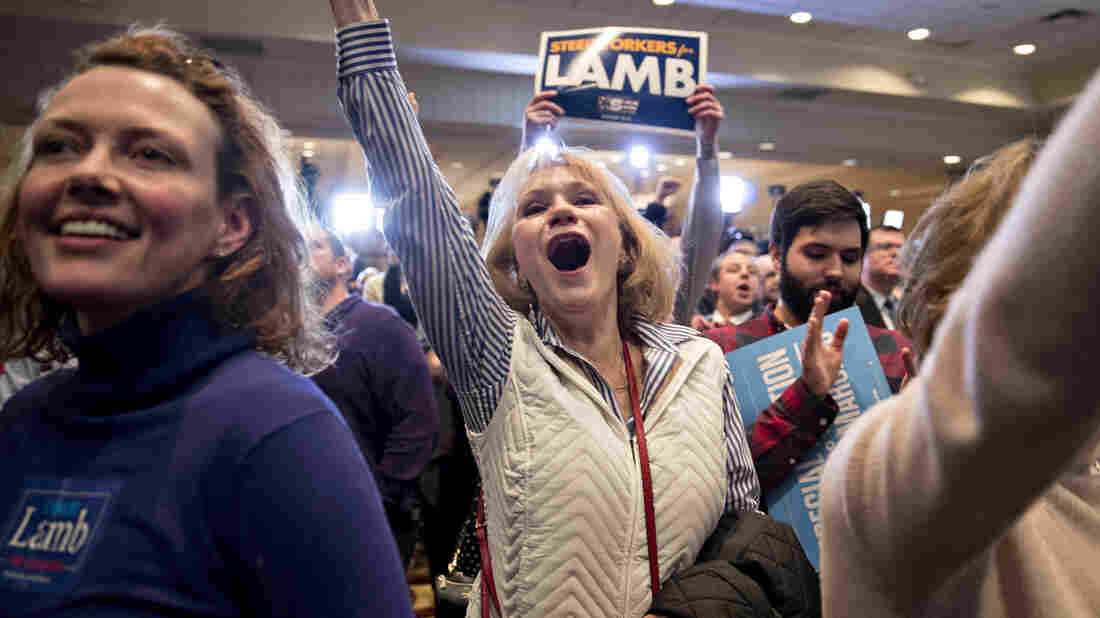 Supporters cheer at an election night rally in Canonsburg, Pa., for Democrat Conor Lamb, whose victory got a boost from suburban voters. Bloomberg via Getty Images hide caption 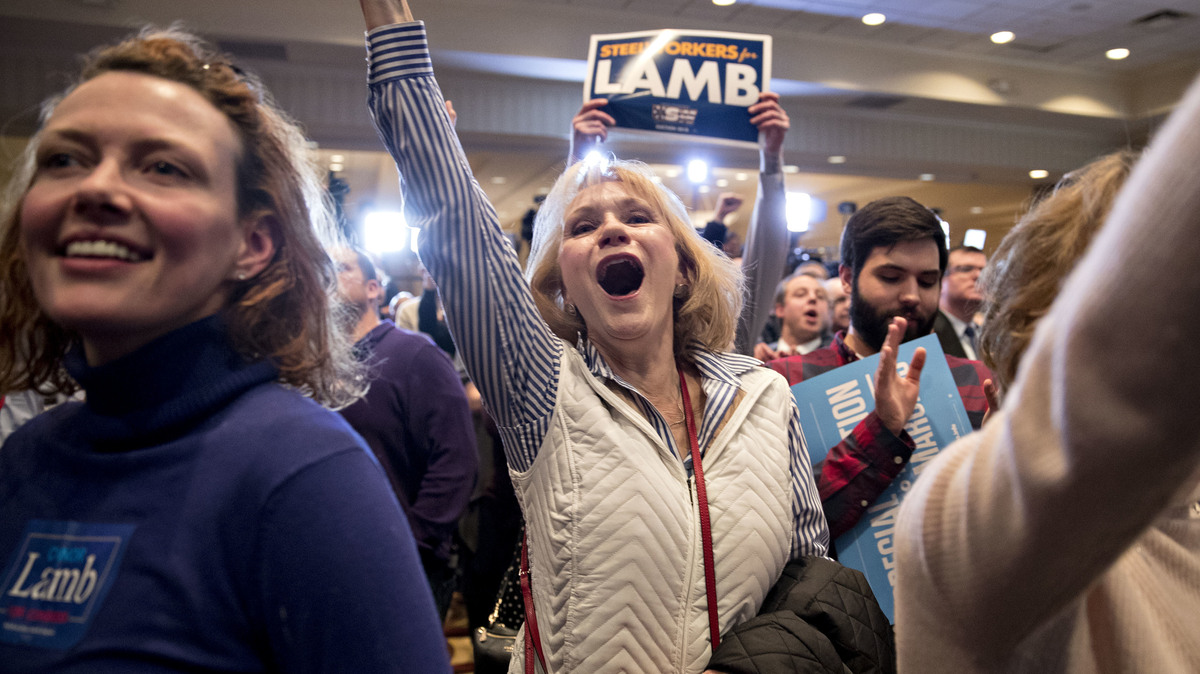 Supporters cheer at an election night rally in Canonsburg, Pa., for Democrat Conor Lamb, whose victory got a boost from suburban voters.

Suburban women get a lot of attention from politicians these days.

In the December special Senate election in Alabama, both campaigns heavily courted suburban women in the closing days.

Just after that election, a Republican strategist concluded to The New York Times that the GOP has an "overwhelming challenge" with suburban women.

One organizer in the recent Pennsylvania special election said suburban women pushed their husbands to vote for Democrat Conor Lamb, who won the congressional seat.

But for all that political attention, asking why suburban women voters matter has the ring of asking why water is wet; at this point, it's just an accepted, definitional Thing that suburban female voters are highly coveted.

But seriously: Why do suburban voters — and suburban women in particular — get so much attention? What is it about living just beyond a city's borders that makes these voters worth tens of millions in campaign spending?

In political speak, the focus on "suburban women" is often a focus on highly educated, upper-middle-class, often-but-not-always-married white women. What it ends up doing is flattening other important demographic differences, even after a long period in which suburbs have grown increasingly diverse. But looking closely at current politics in the suburbs highlights some of the biggest challenges facing both parties as the midterms approach.

Part of what's going on in talking about suburban voters is linguistic imprecision. In the realm of politics, "suburban voters" doesn't just mean "voters who happen to live in the suburbs."

"In general, if you were to pick one archetype, what we're really talking about is relatively densely populated, relatively educated and affluent whites," said Mark Devin Harris, a Republican strategist at Pittsburgh-based Cold Spark Media.

In this sense, "suburban" is a similar term in politics to "evangelical" or "working class" — that is, it's an area where political speak often generalizes whites' voting patterns out to cover a larger, multiracial demographic. There are plenty of nonaffluent people in the suburbs — suburban poverty has risen in recent years — but when pundits, journalists and politicians talk about suburban voters, they tend to be talking about rich and, typically, highly educated voters.

With suburban voters, there's arguably less of that implied connection.

In fact, suburbs have grown increasingly diverse in recent years; as of 2010, 35 percent of suburban residents were minorities — roughly the same share as in the national population. Not only that, but suburbs are not wildly more college-educated than the cities they surround. According to data from the 2010 census, roughly equal shares of suburban and city dwellers in the U.S.'s 50 biggest metro areas had college degrees or higher.

Persuading swing voters vs. shoring up the base

The general focus on white, educated suburban voters points to the strategy that most of these articles and pundits and strategists are talking about when they talk about suburbs: swinging the swingable voters.

As a Hillary Clinton campaign official told The Washington Post just before the 2016 election: "We know that white suburban women are critical for both parties ... and the lowest hanging fruit for expansion among that group is more likely to be college-educated white women."

That expansion has already happened for Democrats. In the past couple of decades, college-educated white people — women and men alike — have swung away from Republicans and toward Democrats.

"It used to be that if you were married with kids and you had a mortgage, that was the Republican base," Harris said. "Married, white couples with a mortgage. That was the heart of the GOP.

Exit polls show that in 1980s presidential elections, suburban voters were decidedly more Republican than Democratic. That slid in the 1990s, and today, there is a more even split. In the 2016 election, 49 percent of suburban voters voted for Donald Trump and 45 percent voted for Hillary Clinton.

Much of the way we talk about suburbs today is simply mired in the politics of the past.

"A lot of that suburban voter talk originated in the '90s, when we were thinking about the religious right and that movement and there was some of that family values element to it," said Republican pollster Jon McHenry. "But now in the Trump era, we're talking about college-educated whites who have substantial incomes who aren't locked-down Republican voters anymore."

With economic concerns lower on these affluent voters' priority lists, McHenry suggested, it's possible that "values" are still swinging their votes — just not the socially conservative "family values" of the past.

"Do those white affluent suburban voters say, 'I'm going to do fine whether there's a Democratic Congress or a Republican Congress, and I'm going to cast my vote on sort of the tone of Washington — not necessarily religious values or moral values, but civic values'?"

If that's true, McHenry said, Republicans are in trouble, as moderates and independents turned off by Trump's tweeting and coarse language might decide to vote for Democrats.

On top of all that, voters who are well-educated and white have relatively high turnout rates. Women also have even higher turnout than men, and this year, women continue to be highly energized against Donald Trump.

But then, even if lots of those white voters are expected to turn out, that still leaves the roughly one-third of the suburban population that's not white. That's why one campaign manager says that swinging those theoretically swingable white, affluent voters is only part of a good strategy.

"To win Virginia by nine and to win the suburban areas by the margin that we did required both a turnout strategy and a persuasion strategy to be successful," said Bradley Komar, who was campaign manager for Virginia Gov. Ralph Northam's successful 2017 campaign.

The Northam campaign tried to persuade moderate Republicans and other white, educated suburbanites to vote Democratic, but its turnout strategy also meant pushing other suburban voters — minorities and younger people — to get out and vote.

The fact that suburbs are getting less white, and that Northam paid attention to those minority voters, did a lot to help him win in those areas, in Komar's opinion.

"I think it's really the same thing with a different name," said Susan Carroll, professor of political science at Rutgers University. Today's "suburban women" have been a political fixation for decades; they just get renamed from election to election.

At the time of the soccer mom craze, Carroll feared that the constant coverage of the "soccer mom" threatened to obscure the real needs of women voters, as other (older, non-white or poor) women were ignored. This year, she says, she is more hopeful that that won't happen.

"There's been much more attention, I think, in media coverage of women voters to the diversity of women voters. So I think there's not likely to be the kind of single-minded attention."