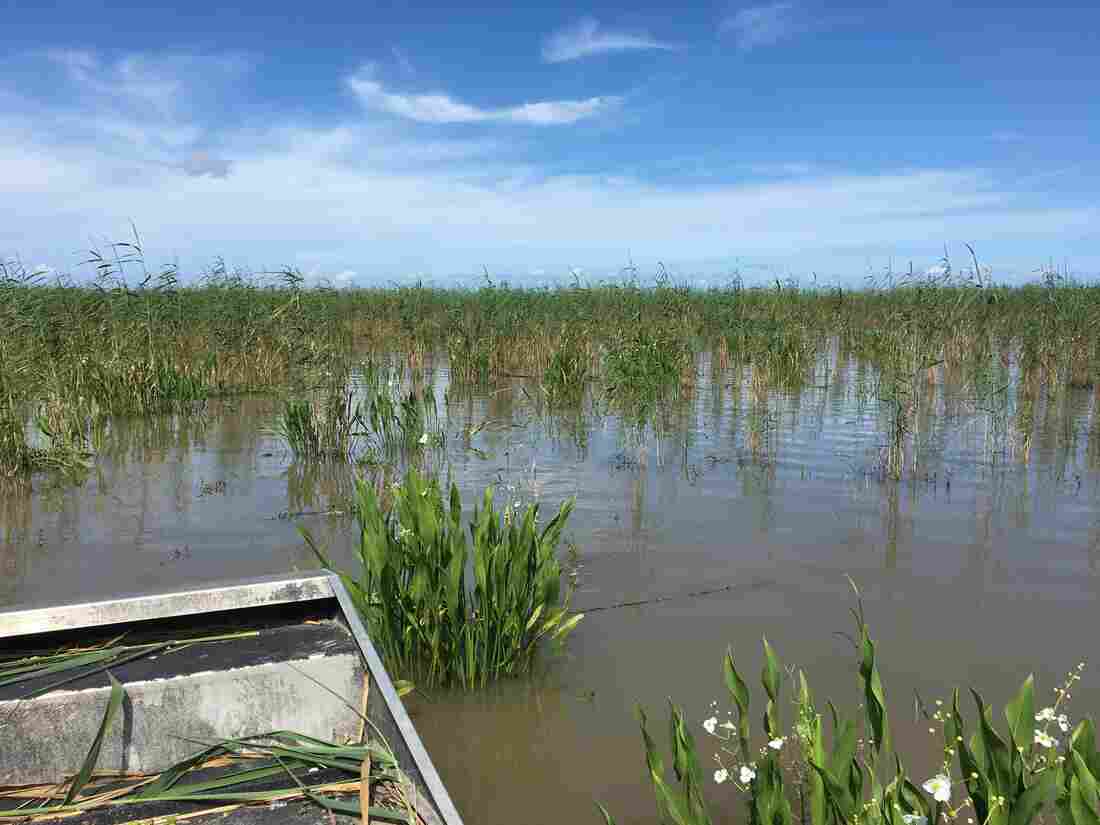 What was once a thick stand of roseau cane near the mouth of the Mississippi River is now open water. Travis Lux/WWNO hide caption 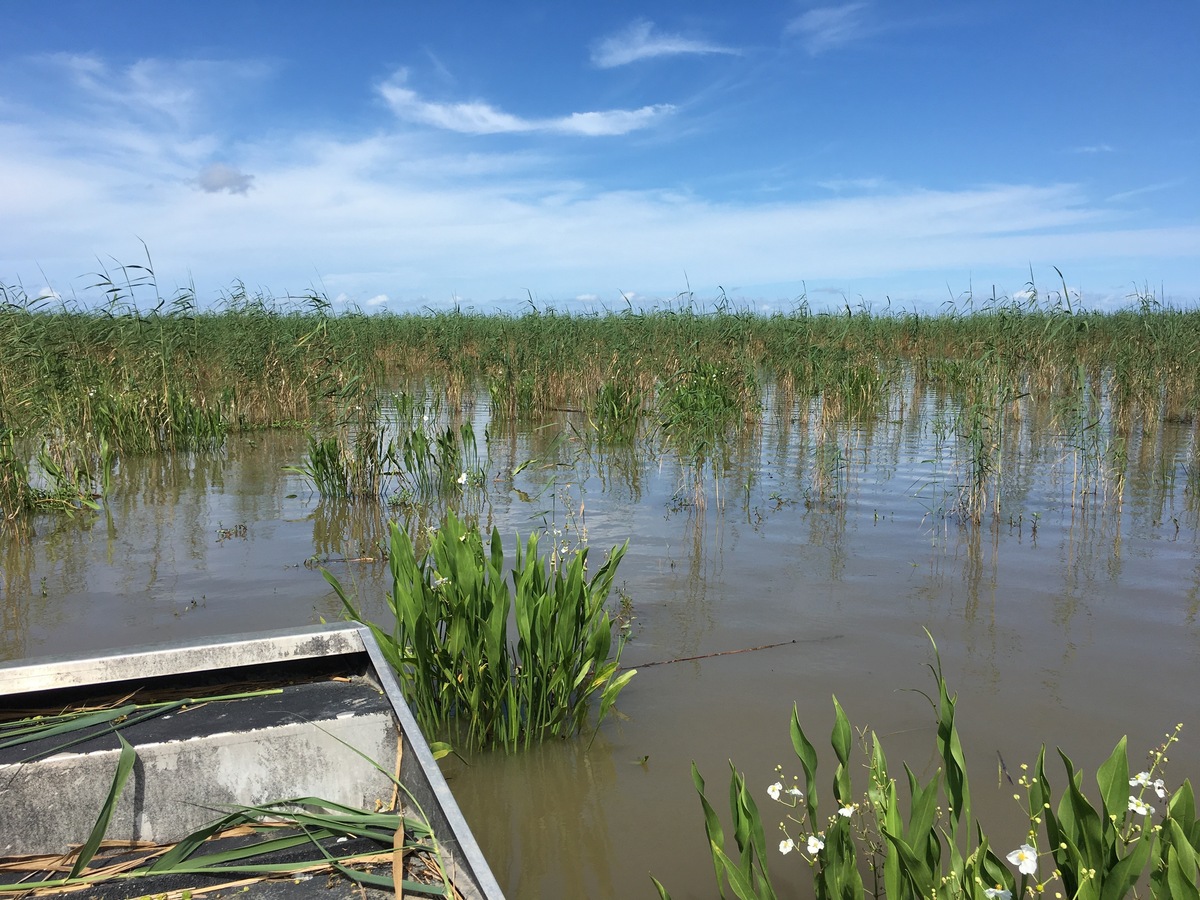 What was once a thick stand of roseau cane near the mouth of the Mississippi River is now open water.

Louisiana's shrinking coast faces a new threat. In addition to sinking land, rising sea levels and erosion — a tiny bug from the other side of the globe is killing off marshes.

Down near the mouth of the Mississippi River, roseau cane is everywhere. It grows tall and bright green, as far as the eye can see. But about a year and a half ago, people noticed that large swaths of it were dying.

Todd Baker is a biologist with Louisiana's Department of Wildlife and Fisheries. From the front of a boat, he bends over and grabs a long, slender piece of cane. It's brown and half-dead. He peels it apart to reveal the killer — the roseau cane mealy bug, an insect no larger than the nail of an adult's pinkie finger.

It burrows its nose into the cane and sucks out the sap.

"That's what kills it," Baker says.

The bug is invasive. It's from either China or Japan, but officials have no idea how it got to Louisiana. So far, officials say more than 200,000 acres of marshland cane have been affected across the state.

"It takes a lot to kill [the cane]," Baker says. "The fact that it's been dying off this quickly is alarming. I've never seen anything like this."

When the cane dies, the soil around it loosens and can easily be washed away into the main navigation channel of the Mississippi River.

The shipping industry was one of the first to notice. From the stern of his huge ship, a pilot looked down at the marsh as he made his way up the river. He thought the cane looked a little patchy and reported it.

"This is a big, big, big, big issue for Louisiana," says Michael Miller, president of the Associated Branch Pilots, a group that pilots ships on the Mississippi. He worries the dying cane will make the job harder. 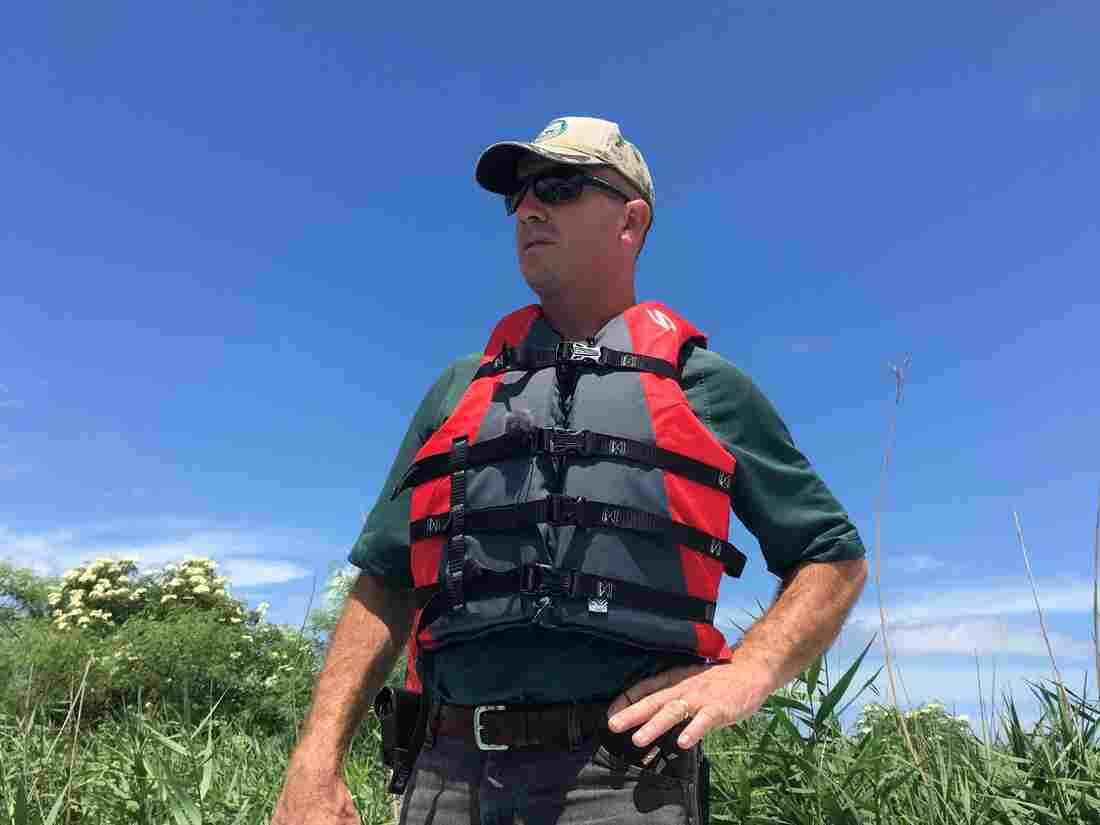 Todd Baker of the Louisiana Department of Wildlife and Fisheries surveys a stand of roseau cane from the bow of a boat near the mouth of the Mississippi River. Travis Lux/WWNO hide caption 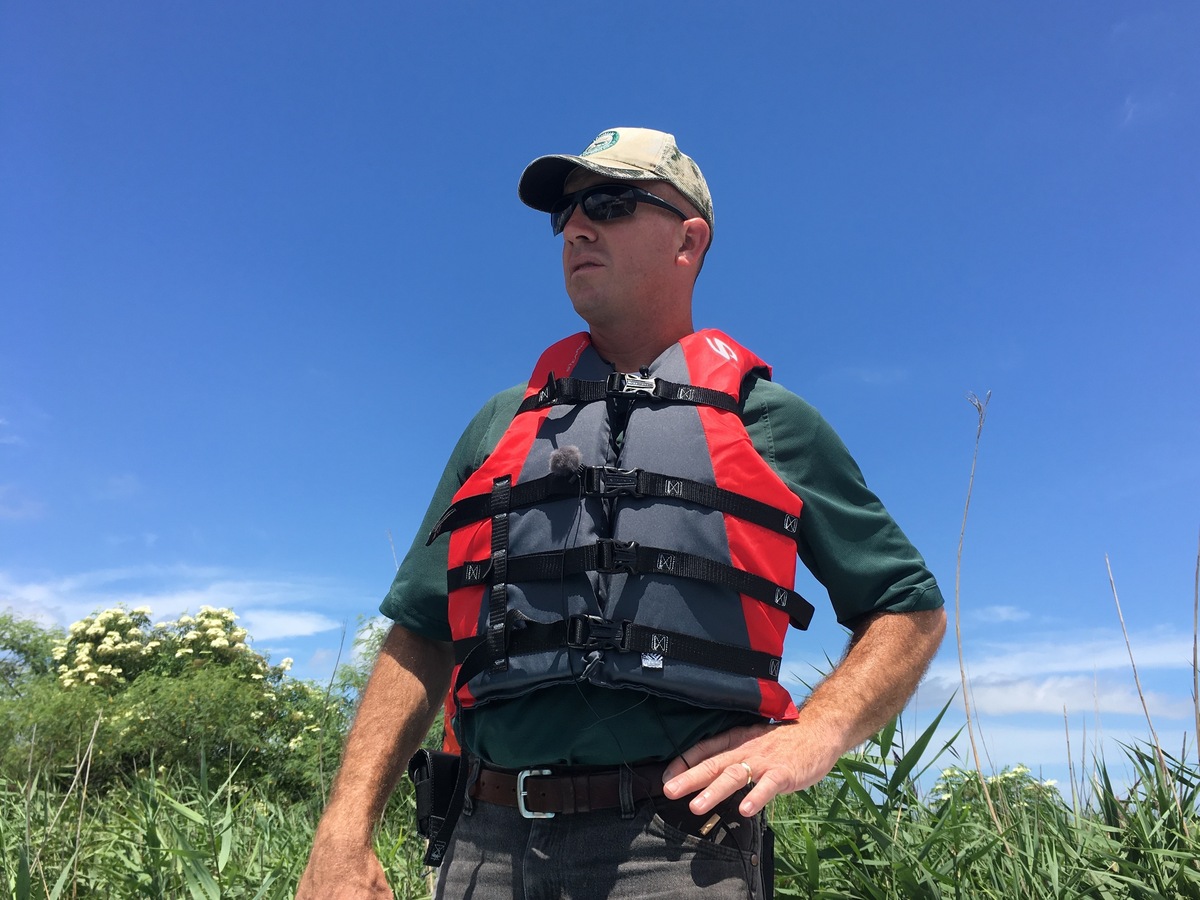 Todd Baker of the Louisiana Department of Wildlife and Fisheries surveys a stand of roseau cane from the bow of a boat near the mouth of the Mississippi River.

Roseau is what holds the river banks together. And if the banks start to disintegrate, that could mean a lot more work for the Army Corps of Engineers, which dredges the river to keep it deep enough for big ships.

"It'll have to be constant dredging to keep that channel open," Miller says. "Sands from the Gulf of Mexico and mud and whatnot will be able to wash back and forth."

Quarantine "won't be as easy"

To keep the bug from spreading any more, Louisiana has issued a quarantine.

Mike Strain the state's agriculture and forestry commissioner, says he wants to make sure the invasive bug "doesn't get out of control." He worries it could mutate and start affecting agricultural crops, like sugar cane.

In essence, the quarantine limits how far people can move the plant. It's aimed mostly at duck hunters, who often cut pieces of cane to camouflage themselves.

Cassidy Lejeune is a conservation manager for Ducks Unlimited.

"It won't be as easy," he says of the quarantine effect on duck hunters. Hunters will have to "take a little bit more effort to figure out what other materials they could use." But he still supports the quarantine.

There is not a clear long-term solution. In China, the cane is sometimes burned to get rid of the bug. But that would be a bad idea in Louisiana, where this part of the state is crisscrossed with oil and gas pipelines. Pesticides could work, but officials worry that will hurt fish and shrimp — a big industry here.

Strain says the state needs more time to figure it out. Congress recently allocated some money for the problem, but for now, the quarantine will have to do.

Meanwhile, the invasive bug may be on the move. A scientist at Louisiana State University thinks he might have found some in neighboring Texas.