Accessibility links
50 Years Ago Baltimore Burned. The Same Issues Set It Aflame In 2015 Riots in Baltimore broke out days after Martin Luther King Jr.'s murder. Segregation and economic tensions led to civil unrest. Those issues were still present in 2015 after the death of Freddie Gray. 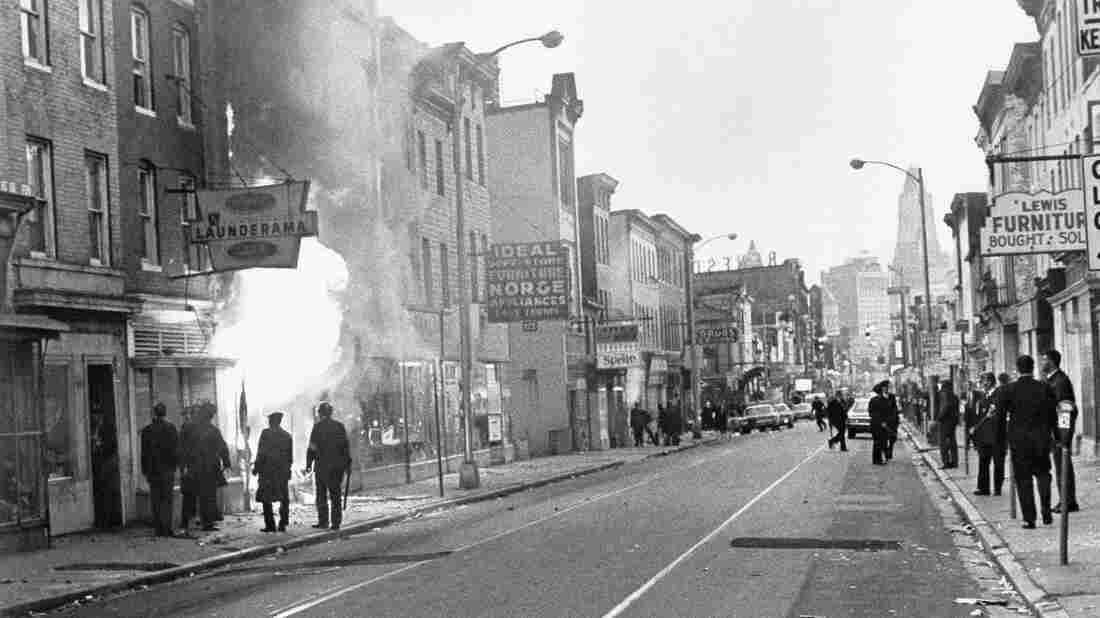 Fire shoots out from a Baltimore store on Gay Street as looting erupted in a five-block business section in Baltimore on April 6, 1968. Police sealed off the area. AP hide caption 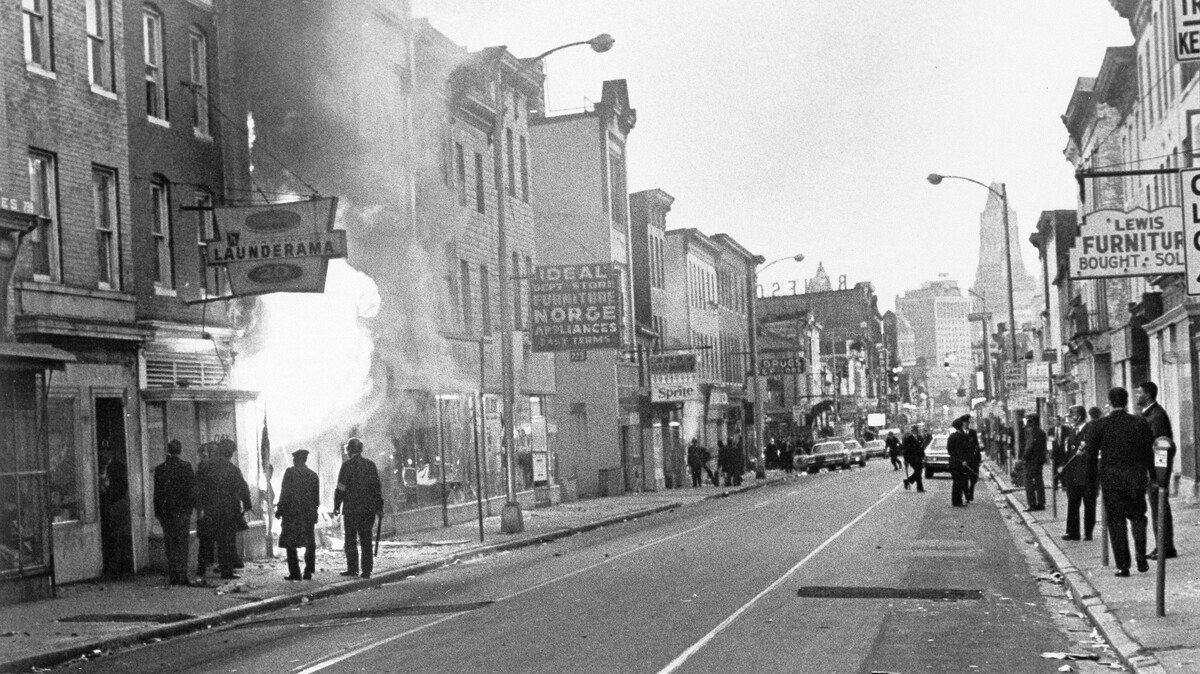 Fire shoots out from a Baltimore store on Gay Street as looting erupted in a five-block business section in Baltimore on April 6, 1968. Police sealed off the area.

Editor's note: This story contains language some may find offensive.

After the Rev. Martin Luther King Jr.'s murder in Memphis 50 years ago this week, protests and civil unrest erupted in some 125 cities across the nation. Baltimore though was eerily calm in the first two days following the civil rights leader's assassination, before mournful tranquility gave way to anger and resentment.

For more than a week, hundreds of homes and businesses were torched and more than 5,000 National Guard troops were deployed to restore order.

Six people died in the unrest.

Baltimore's riots in 1968 were not simply about King's death. The unrest laid bare problems linked to the city's long history segregation and economic disparities, which resurfaced during the city's latest civil unrest three years ago.

Lots of comparisons have made between the 1968 riots and those in 2015.

Both took place after days of peaceful protests following the death of a black man.

In 1968 it was King. In 2015 it was 25-year-old Freddie Gray, who died after suffering a severe spinal injury while in police custody. In both instances hundreds were arrested and the National Guard was sent in to tamp down the violence.

In April 1968, Tommy D'Alesandro III — known to many then as "Young Tommy" was just a few months into his term as mayor when he tried to assure Baltimore residents that authorities had the rioting in hand.

"I want to appeal to all the people of the city of Baltimore to remain calm, to be peaceful, that the National Guard, the State Trooper and the police department have the situation well under control," D'Alesandro said during a press conference.

"It was warm. There of course was tension in the city," Birt says as he stands in the courtyard of the Latrobe Homes housing projects in East Baltimore, his old neighborhood.

He was 15 at the time. And though he says this section of town was considered the ghetto, the neighborhood did not look as it does now, with many units boarded up. Behind him the words "No Shoot Zone" are spray painted on a wall.

Birt, who now teaches philosophy at Bowie State University, says someone tossed a Molotov cocktail and that corner store burst into flames.

This scene was repeated throughout the city as numerous grocery stores, dry cleaners and appliance shops were destroyed — most owned by white folks no longer living in the majority black neighborhoods where their businesses were located. 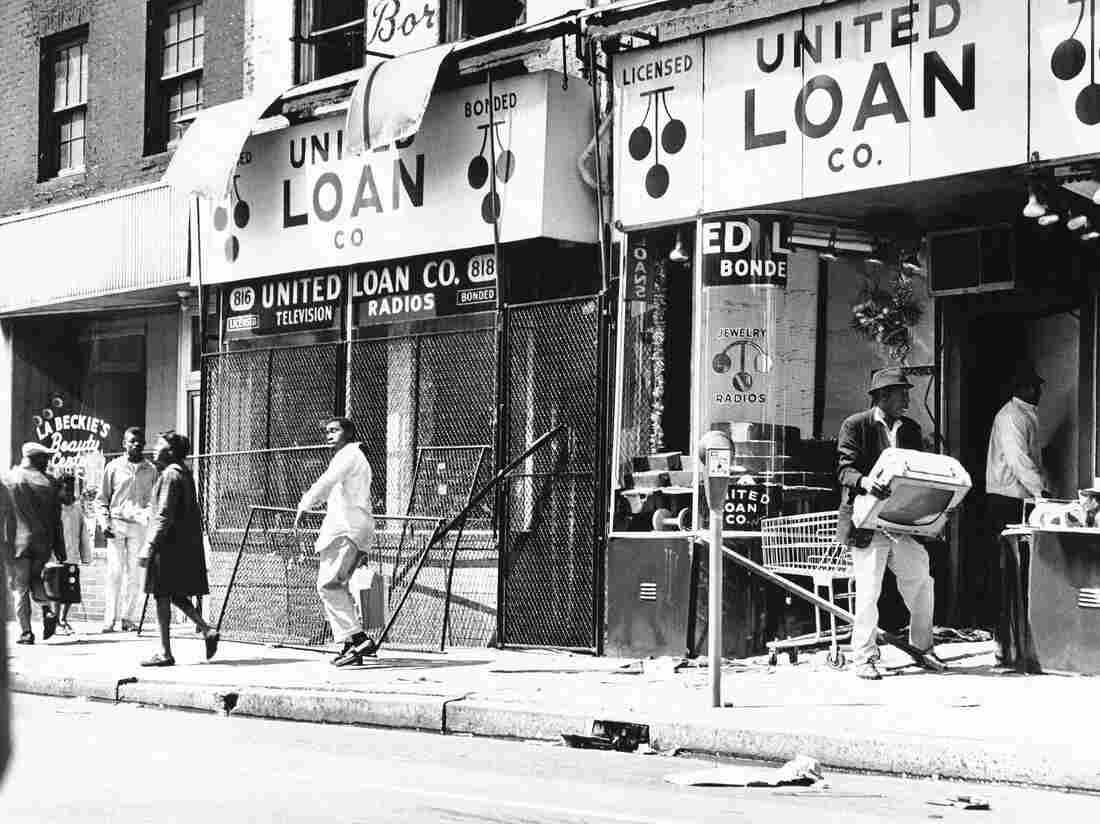 A man carts off a television set during looting incidents in Baltimore on April 7, 1968. Many businesses were broken into, looted and burned that Saturday and Sunday. AP hide caption 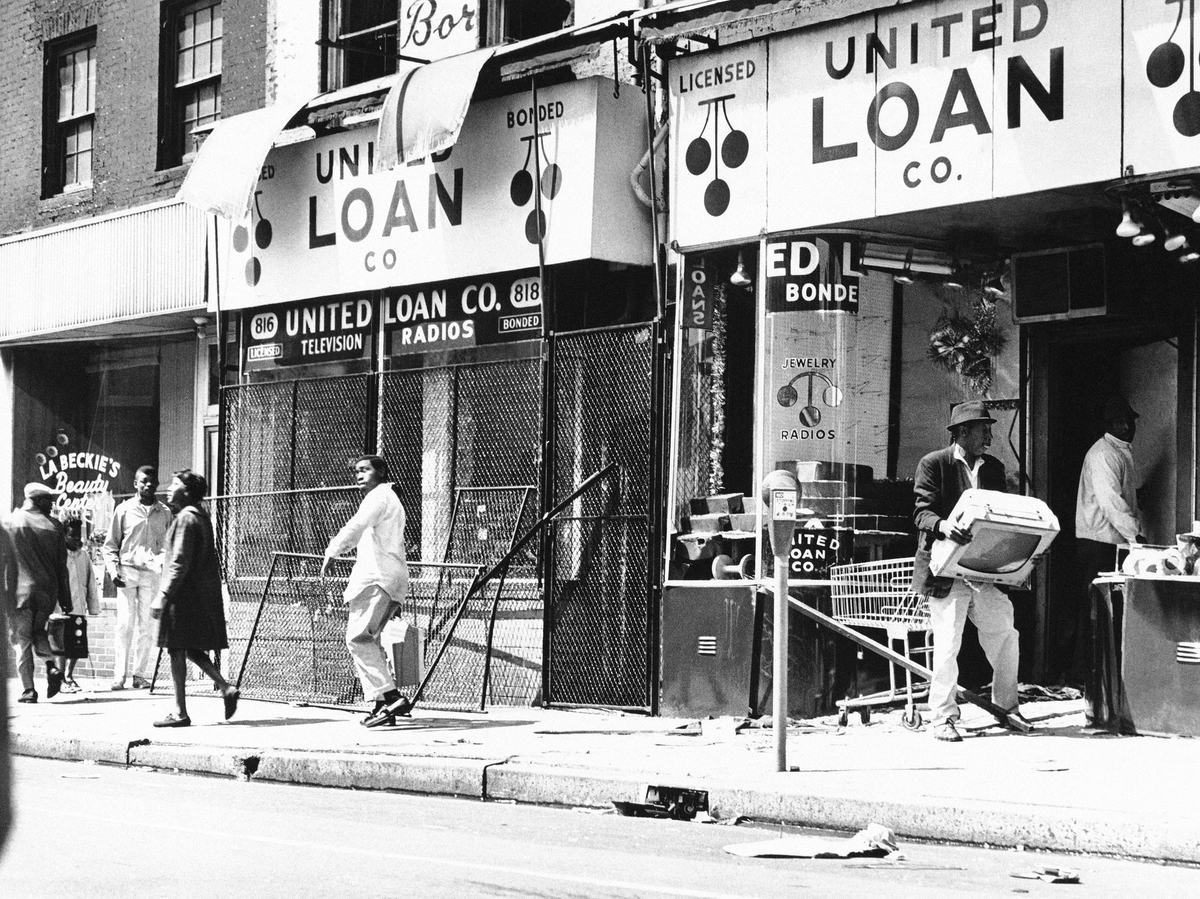 A man carts off a television set during looting incidents in Baltimore on April 7, 1968. Many businesses were broken into, looted and burned that Saturday and Sunday.

Robert Embry was a 30-year-old city council member when the riots broke out. He represented Northeast Baltimore, which was predominantly white at the time.

"A number of people I knew had guns that they got out of the closet and had ready in white neighborhoods," he says, "because they feared the African-American community would come into their neighborhood and do some kind of violence."

Embry is now president of the Baltimore-based Abell Foundation, which helps fight poverty.

"The city, then as now, was racially divided," Embry says.

She was in high school during the 1968 riots and lived in a well-off northwest Baltimore neighborhood where she grew up during the height of white flight. She says Baltimore's economic segregation remains a serious problem.

"You don't have a lot of poor neighborhoods that are integrated," Draper says.

Elizabeth Nix is a professor at the University of Baltimore who directed an oral history project a decade ago centered on Baltimore's civil unrest. Part of that project was turned into a book, Baltimore '68: Riots and Rebirth in an American City.

She says decades of systemic discrimination laid the groundwork for the 1968 and 2015 riots. Things like city-instituted segregation and then redlining that prevented many black people from getting home loans to move or repair their existing houses. 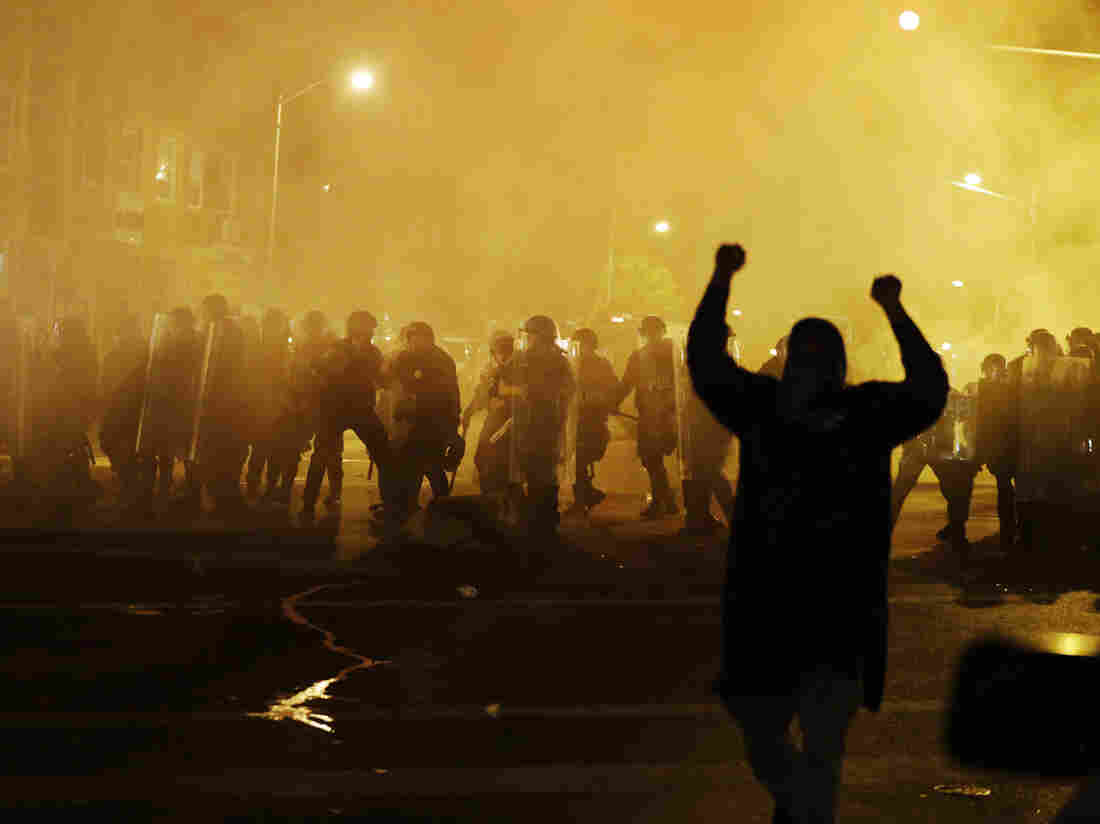 Police in riot gear advance on the crowd in Baltimore following riots that broke out after the death of Freddie Gray in April 2015. David Goldman/AP hide caption 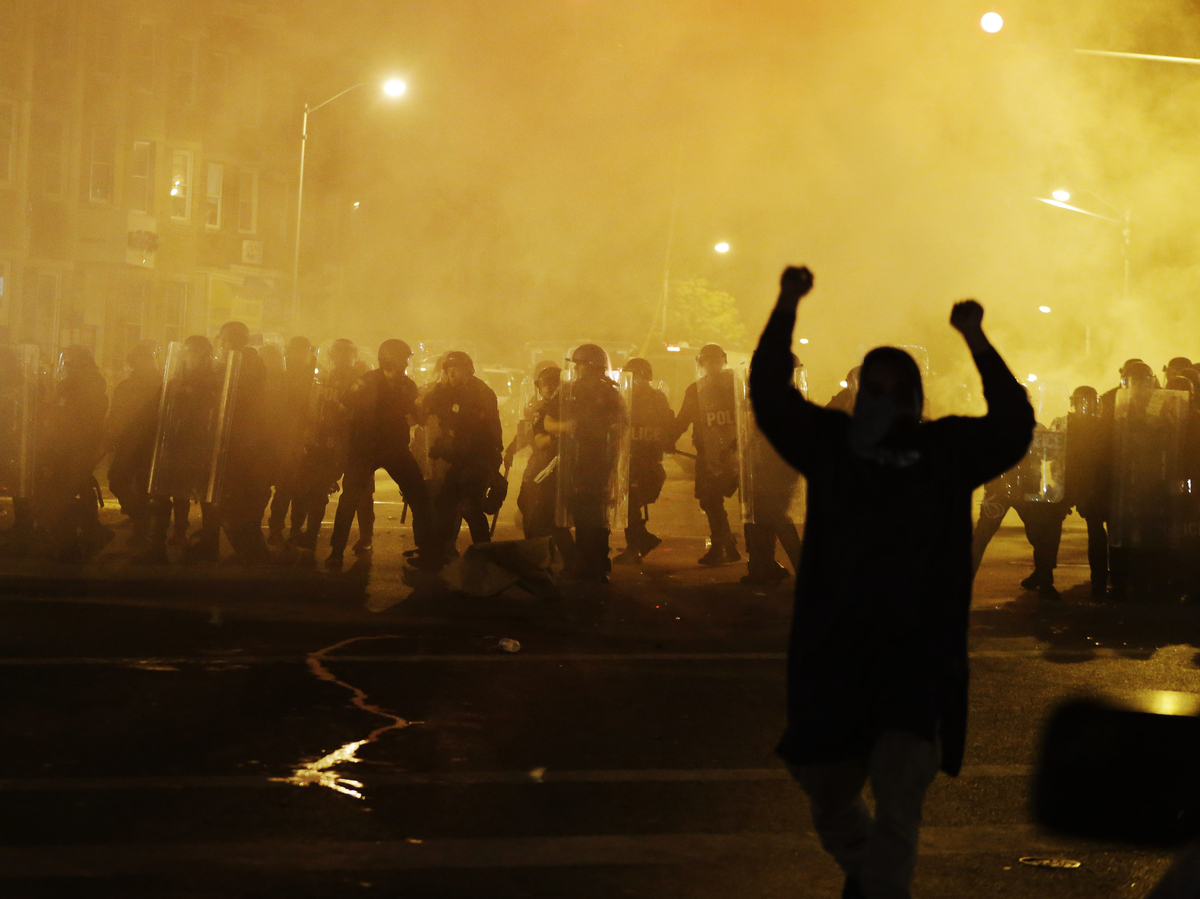 Police in riot gear advance on the crowd in Baltimore following riots that broke out after the death of Freddie Gray in April 2015.

Nix says King was scheduled to visit Baltimore a week before he was killed. At the time he was expanding his fight against segregation to address economic disparities — for all races.

Commemorations of Martin Luther King's passing will continue in Baltimore through April. Next week young activists are sitting down with veterans of the civil rights movement to talk about how to fulfill King's dream.