Accessibility links
A Career Trucker Helps To Steer The Path For Self-Driving Trucks Jeff Runions has spent almost four decades in the trucking industry. Now, he's helping drive the industry's shift toward automation, as a test driver for a self-driving trucking company. 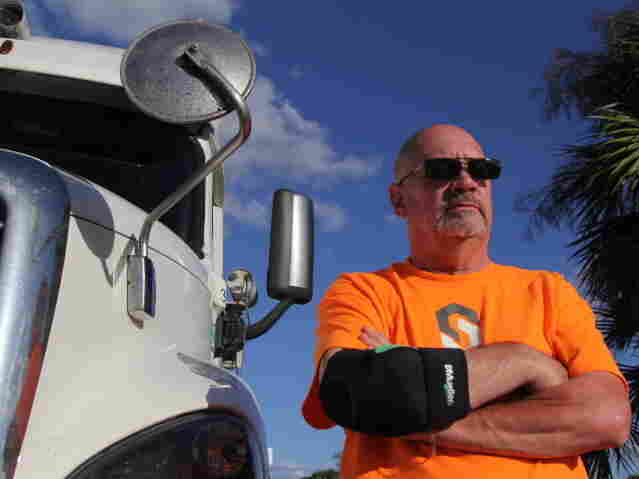 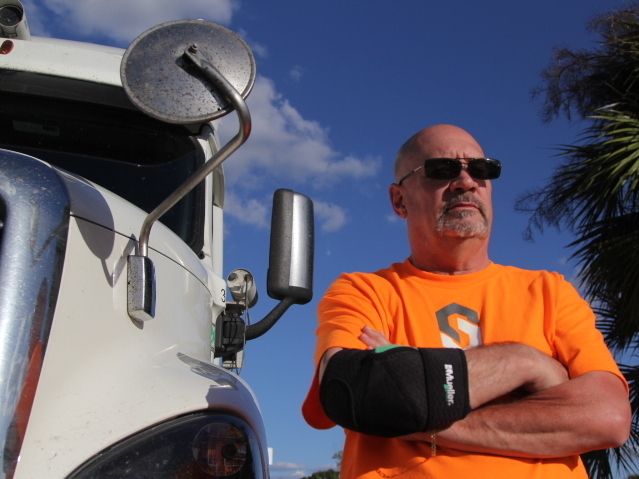 When Jeff Runions started his trucking career nearly 40 years ago, he had high hopes for what the job might bring.

"I wanted the American dream."

Since then he's seen the industry from every step of the ladder — as an independent owner-operator, a full-time company driver, a parts manager, and finally a trucking depot manager.

In his latest job developing autonomous trucks, Runions, 58, has a front row seat to what many see as the future of the 700 billion dollar trucking industry. He's found himself in the middle of a heated race between Silicon Valley juggernauts like Uber and Google to get their self-driving trucks out onto the road first.

We were like the cowboys of the old days, doing our own thing. We own our own trucks, trying to make our own lives...

"It's like when they went to the moon," Runions says. "We're not going to the moon, but it feels kinda like a new technology's coming up and how many people would think a semi would be driving itself?" 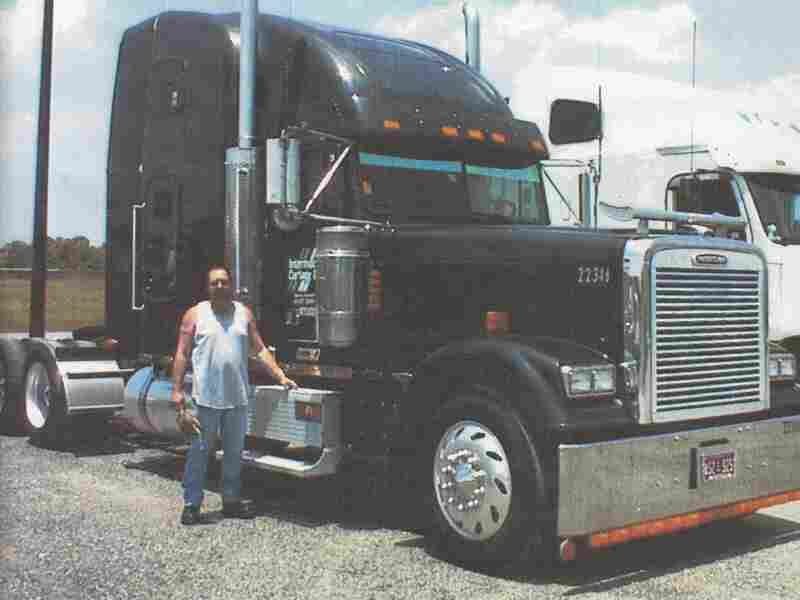 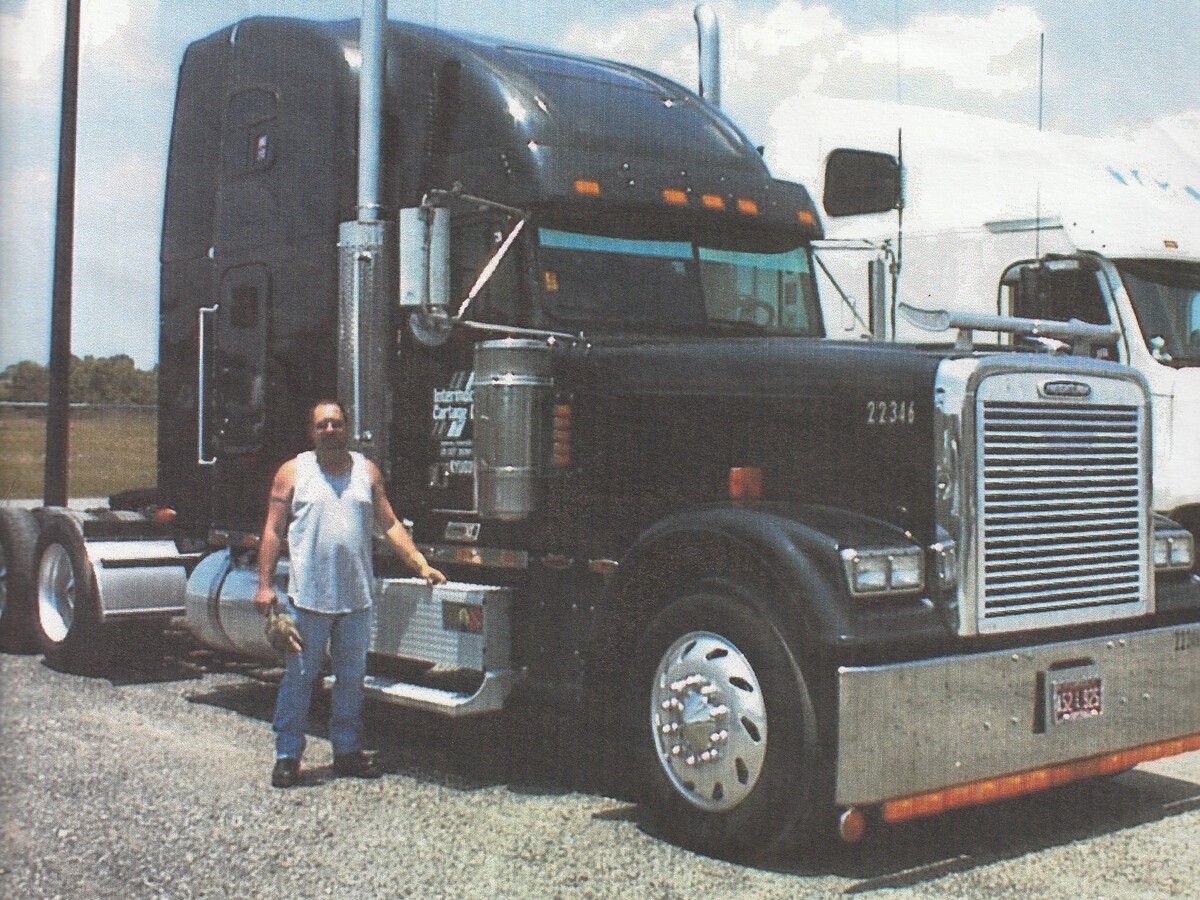 Jeff Runions, during his years as an owner-operator, with his truck.

Runions, who lives in Jacksonville, Fla., works a startup called Starsky Robotics — a company smaller than Uber or Google. Instead of trying to beat their competition to developing fully autonomous vehicles, Starsky's strategy is to develop trucks that are fully autonomous on the highway — then let remote drivers take the wheel from offices filled with arcade-style consoles, when they hit city streets.

The strategy is still in its testing phase: Runions is a safety-driver. He sits in the driver's seat of the truck cabin, ready to take control if there's trouble. His test rides range from an hour and a half to eight hours-long.

Map: Truck Drivers Are The Most Common Job In Many States

He also works alongside his company's programmers to test and tweak the truck's sensors and software.

"I come up with some suggestions once in a while and they do work. I'm not an engineer like these guys are, but sometimes they listen to me. So, that means I'm part of the team too," he said.

Runions, after all, has nearly four decades of experience in the trucking industry under his belt.

In the mid-80s, he became an owner-operator, and purchasing a truck and leasing out his services on contract to freight companies.

For a while, Runions enjoyed the freedom that came with having his own truck and the camaraderie he found with fellow truckers he met while crisscrossing the country.

"We were like the cowboys of the old days, doing our own thing," he said. "We were truckers, and we were young. We were having a good time."

But as the years dragged on, life on the road began to lose its luster. Between regular sleep deprivation and a diet based on truck stop junk food, Runions started to feel that the trucker lifestyle was unhealthy. And the hectic schedule took a toll on his family life.

"You just get tired of the same stuff all the time and sleeping in the truck," he said. You're in this little box all the time. You can't really go anywhere. The only thing you gotta do is go to sleep and get up and do it again."

After fuel prices surged in the early 2000s, Runions decided that going it alone didn't make financial sense for him anymore. After more than 20 years of contracting himself out, Runions sold his truck and took a job with a commercial trucking company.

But he soon found that the new gig had its own downsides.

"A normal driver that works for a company, they gotta stay out three weeks at a time, and they give them two days off when they get home," he said. "Soon as they get home, after their two days, they gotta go right back out for 21 more days. That ain't much of a life. Then you're staying in that box again."

Runions eventually worked his way up to management, but despite the position's better pay, he found its hours and stress were even worse.

Runions came across an online ad for a technology company in search of experienced truck drivers. At first, he was unsure about getting behind the wheel of a self-driving truck, but he says he's come to enjoy the work and its hours. "I'm home when I need to be," he said. "I'm a happy person now."

Runions says that since he began as a test-driver in early 2017, he's heard pushback from people who doubt the safety of autonomous vehicles.

"People are scared of this technology because they don't understand exactly what's going on with it," he said.

That's one of the reasons Runions finds his new job meaningful.

"I feel like I'm helping make this truck right. And we want to make sure that it's safe as it can be being on the highway," he said.

He's also heard from fellow truckers who fear that the new technology will put them out work. But Runions points out the of tens of thousands of open trucking jobs now that the industry is struggling to fill. He thinks that demand plus the growing need for remote drivers mean there'll be plenty of trucking jobs down the road.

Long Haul Trucker Was 'Completely Seduced' By The Open Road

And, Runions says that allowing drivers to work remotely will ultimately make their lives better.

"If you can get where you can [have] a 40-hour hourly [weekly] job like a regular person and be home for your family, can't ask no more than that," Runions said.

"That's like a regular life. A lot of drivers don't have that."