Accessibility links
California Lawmakers Consider How To Regulate Home Schools After Abuse Discovery After home-school parents in California were arrested for torture and abuse, two legislative proposals to strengthen California's loose oversight of home schools are on the table. 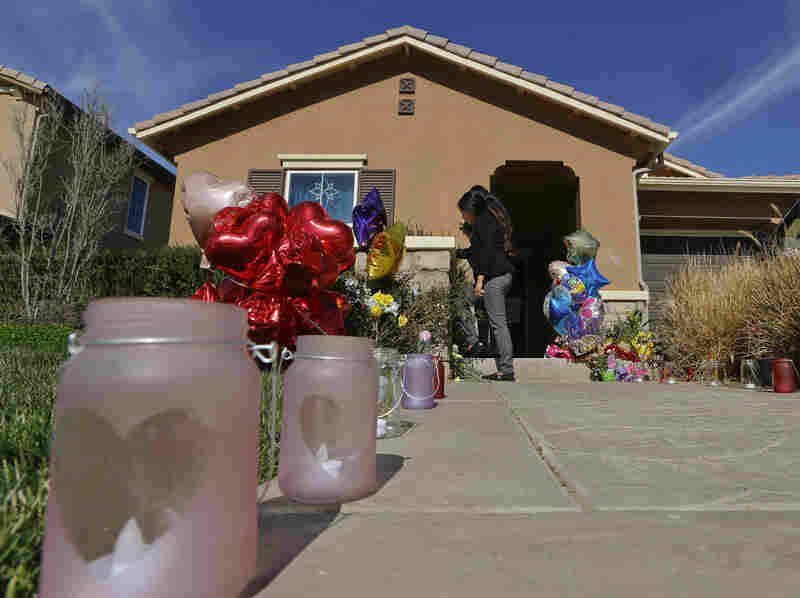 Neighbors write down messages for the Turpin children on the front door of the home of David and Louise Turpin in Perris, Calif. Police arrested the couple accused of holding their 13 children, ranging from 2 to 29, on Jan. 14, 2018. The children were home-schooled. Damian Dovarganes/AP hide caption 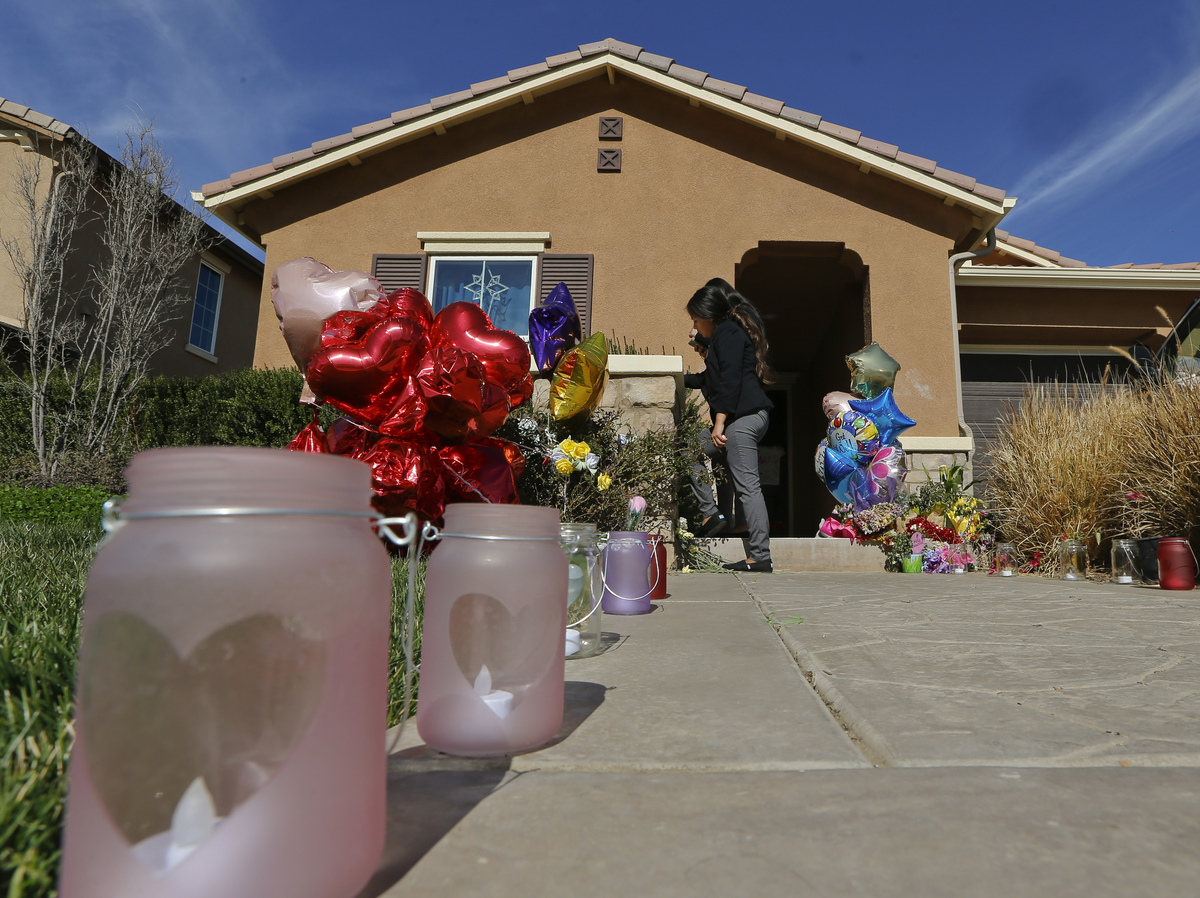 Neighbors write down messages for the Turpin children on the front door of the home of David and Louise Turpin in Perris, Calif. Police arrested the couple accused of holding their 13 children, ranging from 2 to 29, on Jan. 14, 2018. The children were home-schooled.

Adam and Holly Groza are home-school parents in Redlands, Calif., a suburban town an hour east of Los Angeles.

"We met families that home-schooled and they were mature, and thoughtful, and kind," Holly says. "These teenagers would look at you when you talked and actually interact. And, I think we saw that end goal and said, 'That's what we want.'"

The four Groza children, ages 6 through 12, get as much social interaction and life experience as any other student through activities like sports and drama classes.

But just an hour from here, and just three months ago, a home-schooled girl escaped her home in Perris and called 911. Authorities arrived to find the 17-year-old girl and her dozen siblings living in squalid conditions where they were tortured and shackled to beds. The parents, David and Louise Turpin, were arrested and have pleaded not guilty to felony child abuse, false imprisonment, and torture.

'I Would Call That Torture': Couple Arrested After Kids Found 'Shackled' At Home

Such a discovery of abuse and neglect at a home school is rare, but not unprecedented.

Each state regulates home schools differently; California is one of the more permissive ones. To home-school, California parents simply have to submit an affidavit with their addresses to register their home as a private school. After the Turpins' parents were arrested, California state lawmakers started looking at how to change that.

Right now, two bills in the California State Assembly would reform home-schooling. The first is AB 2756, a bill introduced by Jose Medina, the assemblymember whose district includes Perris. In the bill's initial draft, Medina included a provision that would require the Fire Marshal to inspect home schools once a year – but that met with quick resistance.

Medina heard from home-school advocacy groups as well as fellow Assembly member James Gallagher, who is a home-school parent. They convinced Medina to drop the inspections part of the bill, which they considered invasive and unconstitutional.

Now, Medina is unsure regulation of home schools will go over in California at all.

"I don't know if there is a legislative fix to the problem. I really don't, in all sincerity," he says. "And with that, I decided to take out that first part of the bill."

As of now, AB 2756 only requires that the state gather more data on home-schooling in California. But another bill introduced in the legislature could have a far greater impact.

Assembly member Susan Eggman, a co-author of Medina's bill, introduced another bill mandating that the state create an advisory committee to suggest reforms to the home-school system. That could be anything from home inspections to credentialing teachers to setting specific curriculums. The bill itself wouldn't make those changes – that would be up to the legislature – but it's still got some home-school advocates opposing it.

'This Is Depraved Conduct': Couple Charged With Torture After Kids Found Shackled

In an email to members, the Home School Legal Defense Association (HSLDA) said Eggman's bill "threatens our private homeschool freedoms in California" and could give the legislature "raw power to regulate private homeschooling, opening up even the possibility of home visits to observe the children and instruction and to inspect the home as the place of instruction."

Assembly member Eggman countered with a statement saying, "[c]ontrary to the concerns being expressed, the bill does not establish any restrictions or requirements on homeschools," but rather forms a committee to discuss the possibilities.

"I believe this is a modest step to take to ensure we are achieving the best educational outcomes for homeschooled children," the statement read.

Some home-school advocates aren't just opposed to the idea of home inspections, or teachers being required to have valid credentials – they don't think any regulation is necessary at all.

Brian Ray, a home-school researcher and advocate, is one of those people.

"The idea of trying to come up with more laws to stop more people from doing bad things before we even know they're going to do anything bad is not the concept of nation that we have under the U.S. constitution and freedom," he says.

Ray has testified in favor of home-schooling rights in courtrooms and in front of legislators. He's released a study claiming there is "no mathematical relationship between how much the government controls homeschooling and the amount of abuse."

He came to that conclusion by examining a database of nearly 400 home schools that were in the news and courts because children in them were abused. He found no statistical significance between a state's regulation on home-schooling and its rate of home school-related child abuse.

Ray got the data from the Coalition for Responsible Home Education's online database, Homeschooling's Invisible Children. The database lists hundreds of cases of abuse in home schools from media reports and court cases, going back to the 1980s.

But the Coalition says the database is incomplete, and likely undercounts the actual number of child abuses cases related to home-schooling. For that reason, they warn against using it to argue that regulation doesn't protect home-schooled children.

Hännah Ettinger is a volunteer and spokesperson for the Coalition, which is unique among home-school advocacy groups in that it is made up of former home-school children, not parents.

"We would just like to see protections put in place to keep people from falling through the cracks and getting abused," Ettinger says.

Based on their research and some of their volunteer's personal experiences, the volunteers at the Coalition believes home-schooling can keep cases of child abuse unseen by people who a legal and ethical obligation to report it, like doctors and professional teachers.

Accordingly, they have two main policy recommendations: require parents to send their kids to a doctor's check-up and a standardized test with a professional teacher each year.

"Both of these encounters would provide children with two interactions with mandatory reports annually," Ettinger says. "So if something is wrong, one of those two encounters should catch it." 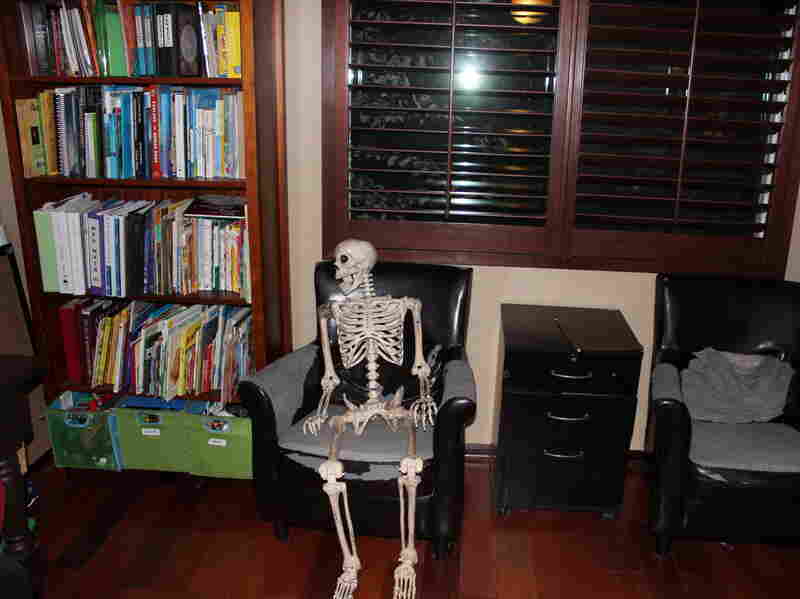 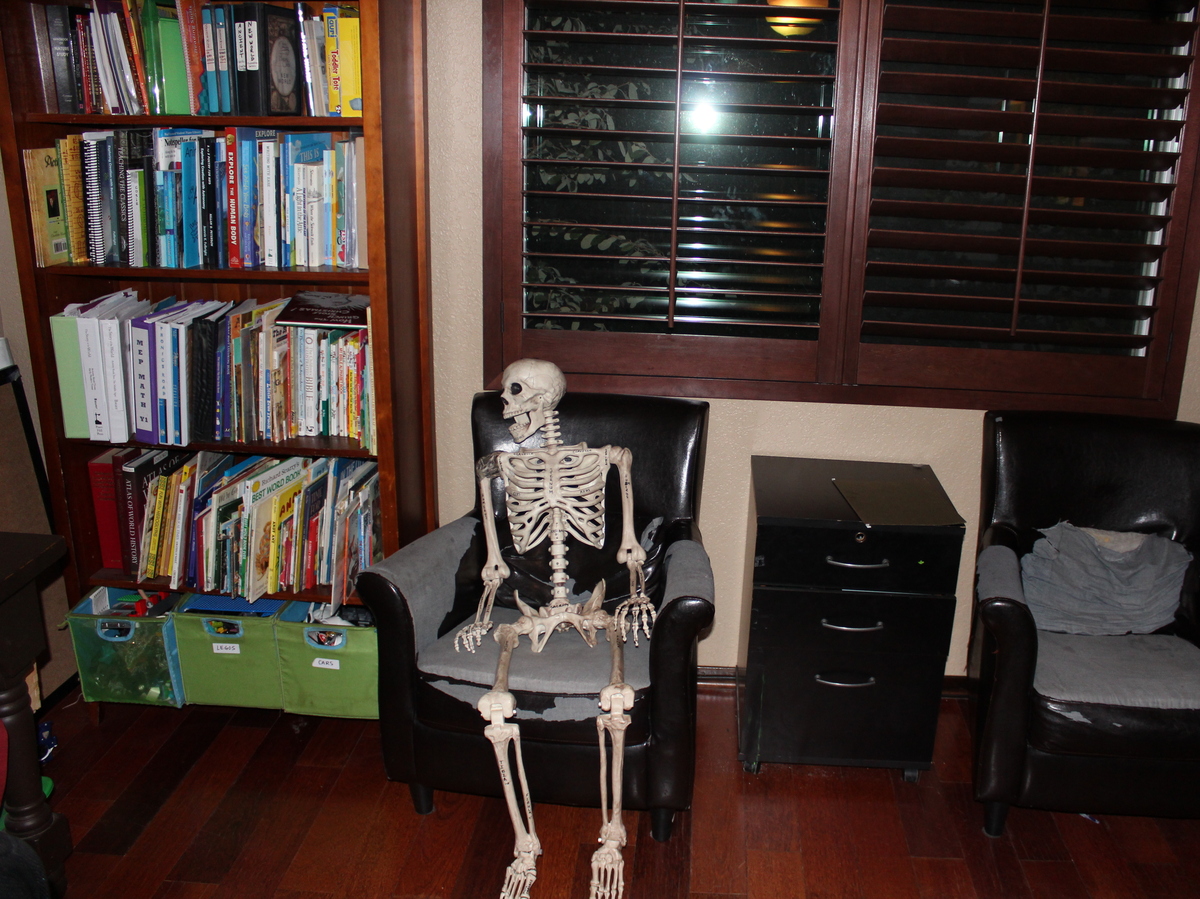 Holly and Adam Groza already take their children to a doctor's check-up and an academic assessment at least once a year, and they resist the idea of a law that would force them to.

"I don't think we should be required to do that," Holly says. "We have the freedom to educate our children the way we think is best."

For Adam Groza, it's not just a matter of whether the government should have a say in education. He also doubts that more legislation would do anything to protect children.

"I think that the reality is that there is no system of education that closes all the cracks, unfortunately, in which children can be abused," he says. "The answer to abuse in many ways is enforcing the laws that we have, parents being good parents. And home-school parents by and large are good parents, they're doing a good job."

Adam says the proposed bills in the State Assembly amount to government overreach – and that if they pass, they could encourage home-school families to simply leave California.

"It just is burdensome; it's unfair," he says, "to pass a bill that appears on the face of it to be about children, but beneath the surface really appears to be about discouraging home-schoolers."

The two Assembly bills, AB 2756 and AB 2926, are scheduled to be heard in committee by the end of April. Holly Groza says she plans to go to Sacramento to testify.