Accessibility links
Why Scott Pruitt May Be Here To Stay If Pruitt's slavish devotion to deregulation has boosted his stock with Trump, it has also endeared him to an array of conservative activists and organizations who have been looking for heroes. 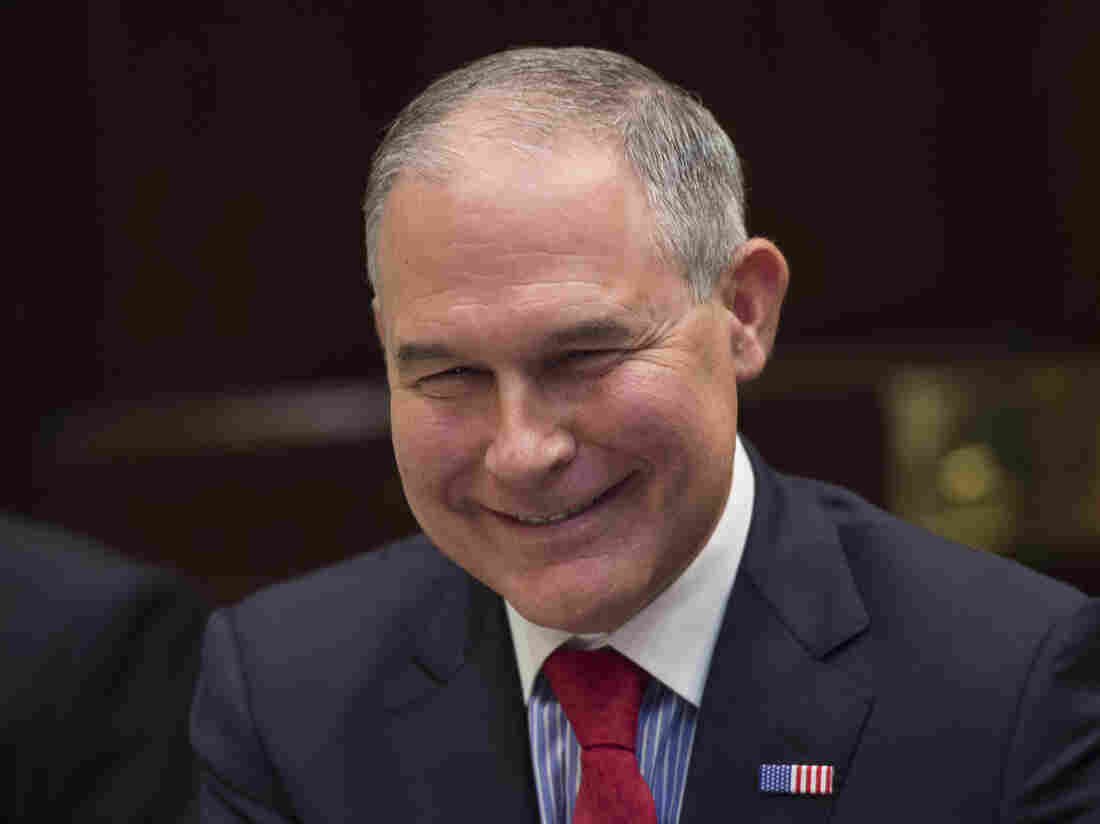 A 2017 file photo of EPA Administrator Scott Pruitt. Democrats have called for Pruitt's resignation over a variety of spending scandals but President Trump and key Republicans have rallied to his defense. Pool/Getty Images hide caption 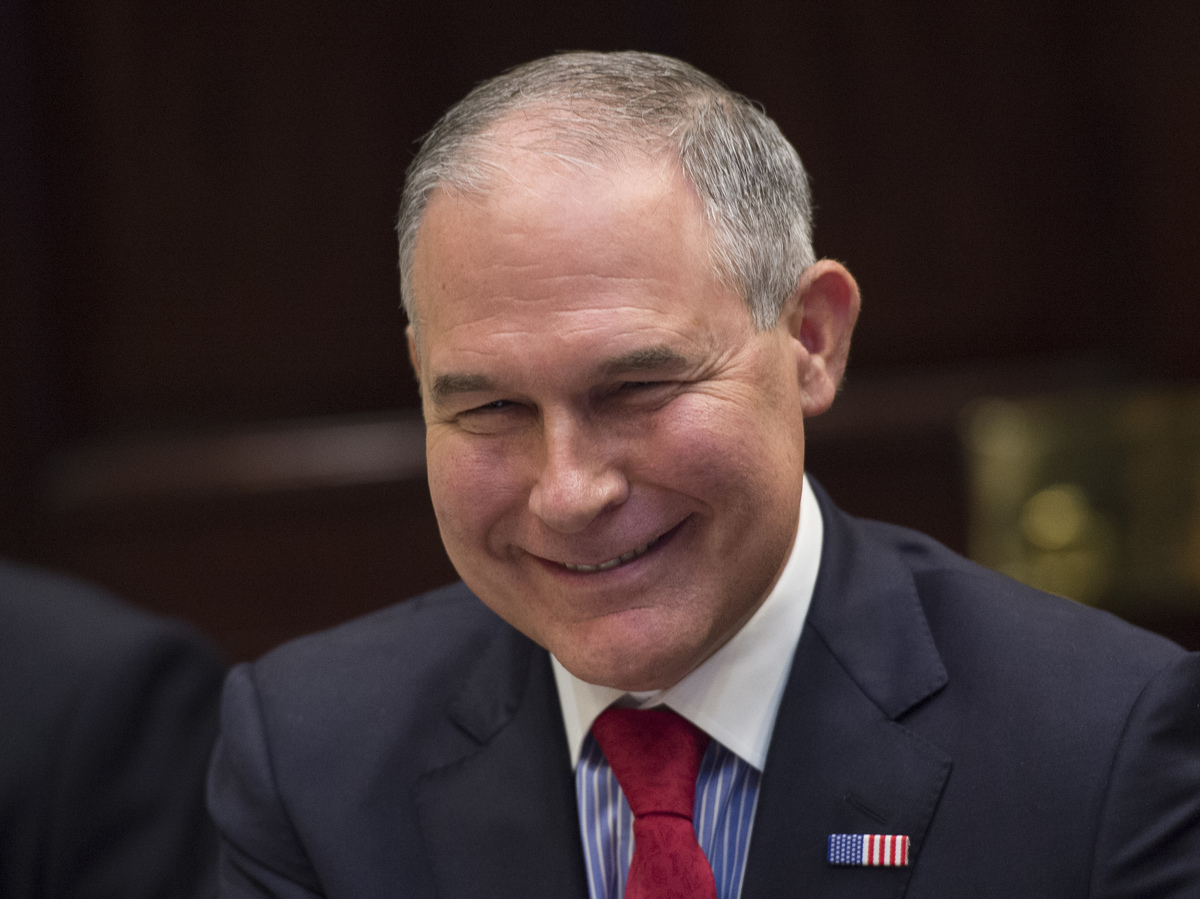 A 2017 file photo of EPA Administrator Scott Pruitt. Democrats have called for Pruitt's resignation over a variety of spending scandals but President Trump and key Republicans have rallied to his defense.

For days, the Washington world waited for the presidential tweet that would end the troubled tenure of Scott Pruitt, the high-profile and high-maintenance administrator of the Environmental Protection Agency (EPA).

It was hard to imagine anyone surviving an onslaught of stories like those recounting Pruitt's living large on several continents — with eye-popping costs for travel and security.

It was harder yet to imagine anyone enduring the personal exposure concerning his condo rental relationship with an oil industry lobbyist (complete with missed rent payments, changed locks and changing stories).

And surely it was hardest of all to imagine someone being effective running the EPA after a raft of reports about its internal bureaucratic brawls.

White House Chief of Staff John Kelly, under pressure himself, was reported to have urged Pruitt's dismissal. House Oversight Chairman Trey Gowdy said he was looking into Pruitt's case. And Pruitt himself seemed off balance in an interview with Fox News' Ed Henry.

But Monday dawned with Pruitt still in place and even looking a bit less embattled. The president's only weekend Twitter mention of his EPA guy dissed the mounting charges against him and added: "Scott is doing a great job!"

This could, of course, change at any moment –Twitter is always open, after all. The president has lauded other former aides right up to the hour of their firing. And Pruitt's survival could still prove to be just a time out for the president to find a suitable successor.

But the weekend did seem to bring a wind shift. Any thought that Pruitt might resign voluntarily has faded. Some of his Republican colleagues, such as Sen. Mike Rounds of South Dakota, have introduced the word "nitpicking" into their description of his travails.

So for the moment it appears Pruitt is not on his way out. And if what doesn't kill you makes you stronger, then Pruitt may still be on his way up.

Pruitt may survive and even prosper in Trump world for three reasons. First, his ethics issues are just that – ethics issues – and have yet to signify any actual setbacks for the president on policy or politics.

Second, a variety of conservative activist organizations and advocates have backed Pruitt vigorously – praising his efforts to roll back environmental and energy regulation and serve the broader agenda of the Trump presidency and the conservative movement.

Third, and perhaps most important, the political calculus always changes with the political calendar. What was unacceptable behavior for top level officials in the first year or so of the Trump administration might look different as the White House prepares to meet what may be greater challenges in the weeks and months ahead.

In other words, the time to circle the wagons may be nigh.

Let's take those three reasons one at a time.

First, Pruitt may have embarrassed the administration on the ethics front and become a negative story in the media, but he has been an unswerving servant of the Trump agenda at EPA. After having sued the agency himself as attorney general in Oklahoma, Pruitt needed no urging from his boss in this regard.

Lawsuits have blocked many of his directives, but the effort has been made and been counted a success in the Oval Office. Beyond that, Pruitt remains on task and can be trusted to own the deregulatory mission every day he is on the job.

Other cabinet members whose travel or business arrangements made news did not have the same protective covering. Former Congressman Tom Price ran afoul of various rules and strictures at a time when the GOP's drive to repeal the Affordable Care Act was stalling out. Price might have little to do with the ACA's final fate, but his association with the issue was not helpful for his case.

Similarly, David Shulkin had to defend his own travel arrangements and corner-cutting at the Veterans Administration at a time when Trump was growing impatient over the issue of private care for veterans outside the VA. Shulkin had been an administration star in 2017, pushing VA reforms through Congress that delighted the president. But by the spring of 2018, the stakes were higher and the game had changed. 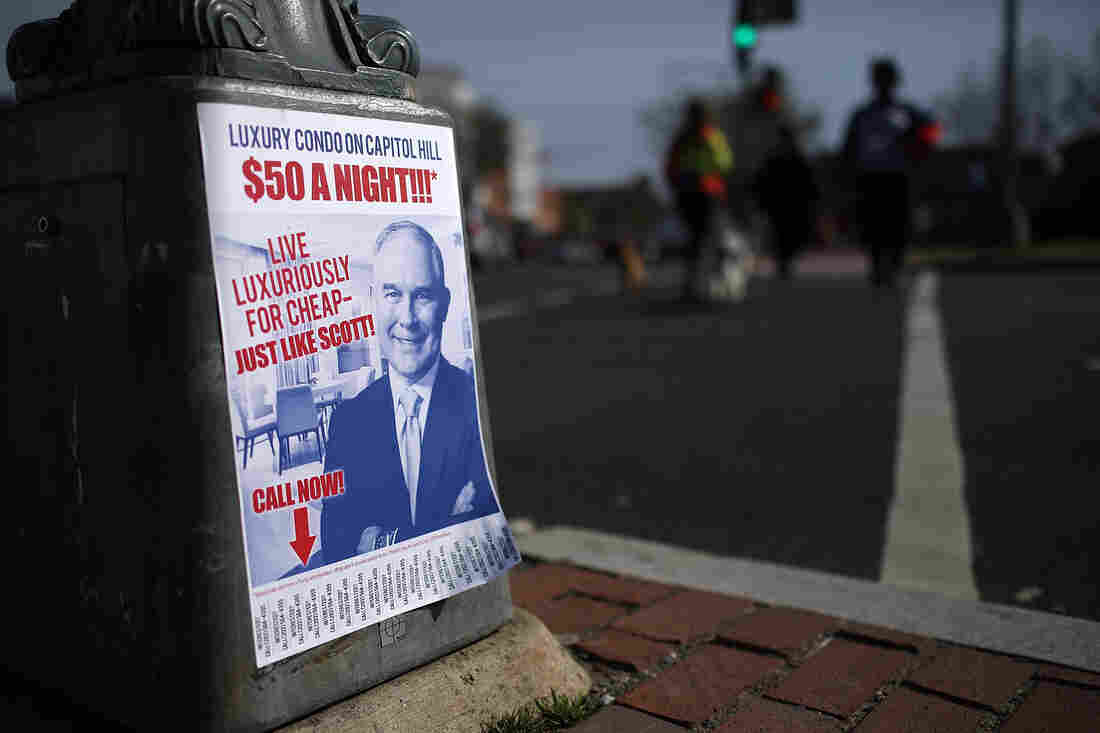 Satirical fliers posted around the Capitol Hill neighborhood of Washington, DC poke fun at EPA Administrator Scott Pruitt. Pruitt rented a room in a condo from a lobbyist for $50 a night, among several controversies that have engulfed Pruitt. Win McNamee/Getty Images hide caption 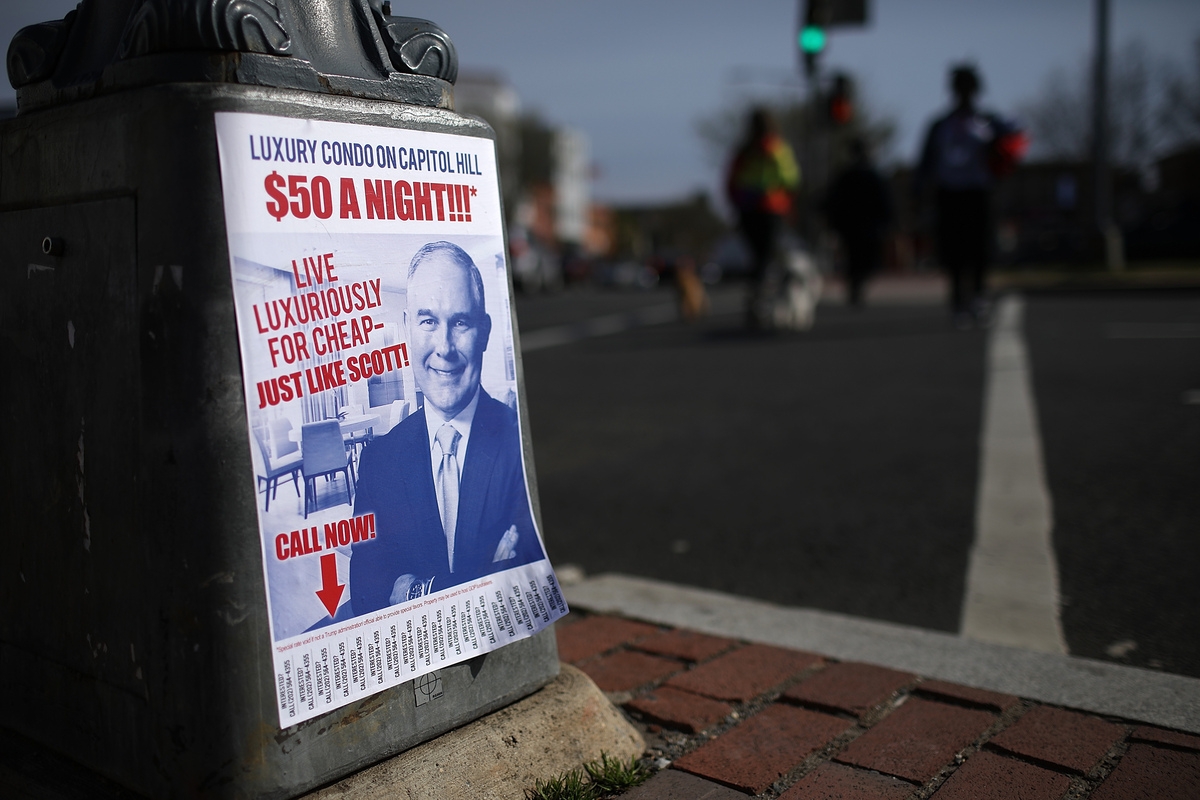 Satirical fliers posted around the Capitol Hill neighborhood of Washington, DC poke fun at EPA Administrator Scott Pruitt. Pruitt rented a room in a condo from a lobbyist for $50 a night, among several controversies that have engulfed Pruitt.

If Pruitt's slavish devotion to de-regulation has boosted his stock with Trump, it has also endeared him to an array of conservative activists and organizations who have been looking for heroes. On Friday, the day Pruitt's fate seemed to hang in the balance, a letter from 10 influential leaders arrived at the White House thanking Trump for keeping Pruitt and urging him to stand fast.

Signatories included a coal industry advocate, but there were also Tea Party groups and conservative media critics. Perhaps most notable was the juxtaposition of the social issue Family Research Council with the investor-class Club for Growth.

"Pruitt is delivering on policy changes that conservatives have wanted to see for years, if not decades," Jenny Beth Martin of the Tea Party Patriots told Politico.

Also signing the pro-Pruitt initiative was Ed Meese, the second attorney general for President Ronald Reagan in the 1980s. Meese's signature did carry some irony. It was 30 years ago this spring that he resigned as attorney general under a cloud, several months before the end of his term. An independent counsel had criticized his conduct on behalf of a defense contractor (Wedtech) in a case that later brought courtroom convictions for several other state and federal officials.

Today, at age 86, Meese is still active with various conservative think tanks. His involvement for Pruitt underlines the movement's willingness to focus on results and let others stew over the behavior of the officials achieving those results.

In this sense, Pruitt's ultimate protection may be the way his dueling images — controversial and consequential — mirror those of the president himself.

Finally, the decision about Pruitt's job is overshadowed by what lies immediately ahead – not for Pruitt but for the president. In a matter of weeks, many expect the expanding investigation led by special counsel Robert Mueller to reach a critical mass. At that point, the potential threat to individuals in the president's innermost circle may become real. And if few expect the president himself to become a criminal target of the probe, he is reported to be part of the criminal investigation.

So far, at least, that movement has been totally in Trump's corner — thankful for the judgeships and the tax cuts and the executive orders. But there have been rumblings over the $1.3 trillion omnibus spending bill Trump signed in March, regarded as an abomination on the right. And some are disturbed not just by the Stormy Daniels imbroglio but by the prospect of other compromising tales.

That is why, at this moment in particular, Trump does not wish to disturb any of the cornerstones in his base, including and especially those represented on the Pruitt letter. And that dependence will not lessen in the fall, when the president and his party will need these same voters to be eagerly engaged when the next day of reckoning — the midterm elections.

The November elections will determine control of Congress for two years, but will also determine the control of 36 governorships – nearly all of them for four years. And in a broader sense, they will render the most important verdict to date on the first half of Trump's term.