Accessibility links
In 'Varina,' A Confederate Contemplates Her Complicity Charles Frazier was done writing about the Civil War after his award-winning novel Cold Mountain. Then he discovered the true story of the first lady of the Confederacy. 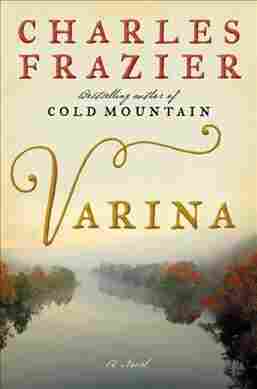 "After Cold Mountain, I never thought I wanted to write about the Civil War again," he says in an interview. "But as the past three or four years have shown, it's not done with us — as a country, as a culture."

We still have competing visions of America. And Charles Frazier's new novel Varina offers a fictional version of a real-life Confederate.

Jefferson Davis was the president of the Confederacy, and Varina Davis was his wife — the Confederate first lady. It's Varina who caught Frazier's attention. His novel depicts Mrs. Davis long after the war, when she's a widow and moves, as Varina did in real life, to the North. She tries to remake herself as a writer, though the past keeps returning to haunt her.

On what drew Frazier to write about Varina

I was very interested in this figure who was peripheral to all of those enormous, destructive, horrible elements of American history who continued evolving in her thinking. She was never perfect, and to my mind, it's only really the greatest heroes who are able to rise totally above the values of their culture, and she certainly wasn't that. But I really liked the idea of a character struggling to move forward, to stay engaged with the world. And she, at some point, said: I'm not going back to Richmond, to the South, until it's feet-first in a box. ...

And the thing that kept pulling me in is her continuing to examine the lead-up to the war, her complicity, that sense of the consequences of being on the wrong side of history, those kinds of things.

In New Novel, Frazier Returns to Love in Appalachia

In New Novel, Frazier Returns to Love in Appalachia

Not My Job: Charles Frazier Gets Quizzed On Frasier Crane

Not My Job: Charles Frazier Gets Quizzed On Frasier Crane

On the real-life inspiration behind the fictional James Blake, a mixed-race character who Varina first knew as a boy

There's a photograph of him that would have been made in a photographer's studio in Richmond, and some of her children were photographed at the same time with some of the same props. And this little boy left Richmond right before the fall [of Richmond], and traveled with her until they were captured in South Georgia. ...

There's a little bit of record of him for about a year after that, and then he disappears from history. He would have been about 6 at the time. And I wondered what a reunion of Varina and that little boy, now a middle-aged man, would be like — and what questions he might [have] asked her about his past and her past.

On Varina's views on slavery

She, in later age, said very clearly: The right side won the war. She also would sometimes make retrograde statements, like: Gosh, I wish we could all go back to the time when we took care of each other. And James Blake [the character] very quickly challenges her on that.

V thought about how the landscape would never be the same after this war even if the blasted battlegrounds healed with new green growth and burned farms were either rebuilt or allowed to rot into the dirt. The old land had become all overlain with new maps of failures and sins, troop movements, battles and skirmishes, places of victory and defeat and loss and despair. Slave quarters, whipping posts, and slave market platforms. Routes of attack and retreat. Monumental cemeteries of white crosses stretching in rows to the horizon, and also lonesome mountain burials with one name knife-cut into a pine board, weathering blank in ten years and rotted into the ground in twenty. The land itself defaced and haunted with countless places where blood — all red whoever it sprang from — would keep seeping up for generations to come.

Danny Hajek and Shannon Rhoades produced and edited this interview for broadcast. Patrick Jarenwattananon adapted it for the Web.