Accessibility links
Cindy Hyde-Smith: Mississippi's First Female Senator Takes Office Cindy Hyde-Smith is making a name for herself in the state's history books as the first woman to represent the Magnolia State on the Hill. 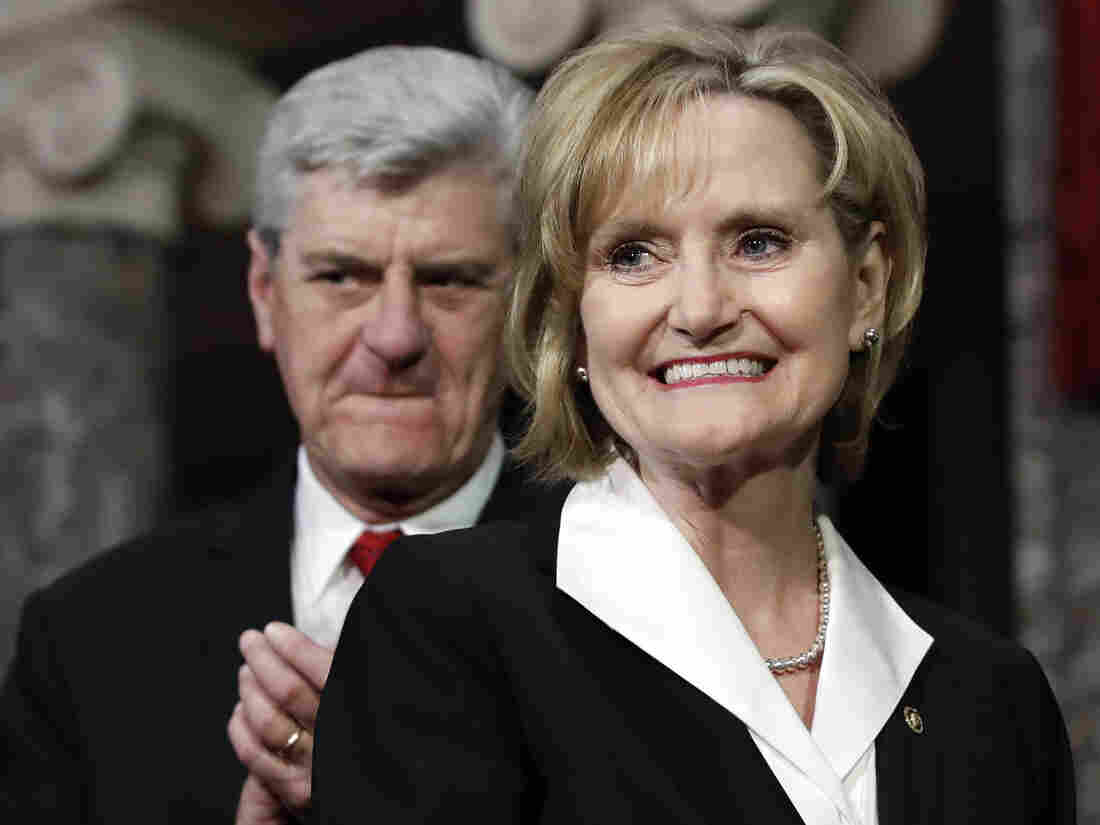 Mississippi Republican Cindy Hyde-Smith at her ceremonial swearing-in at the Capitol on Monday. With her is Mississippi Gov. Phil Bryant. Jacquelyn Martin/AP hide caption 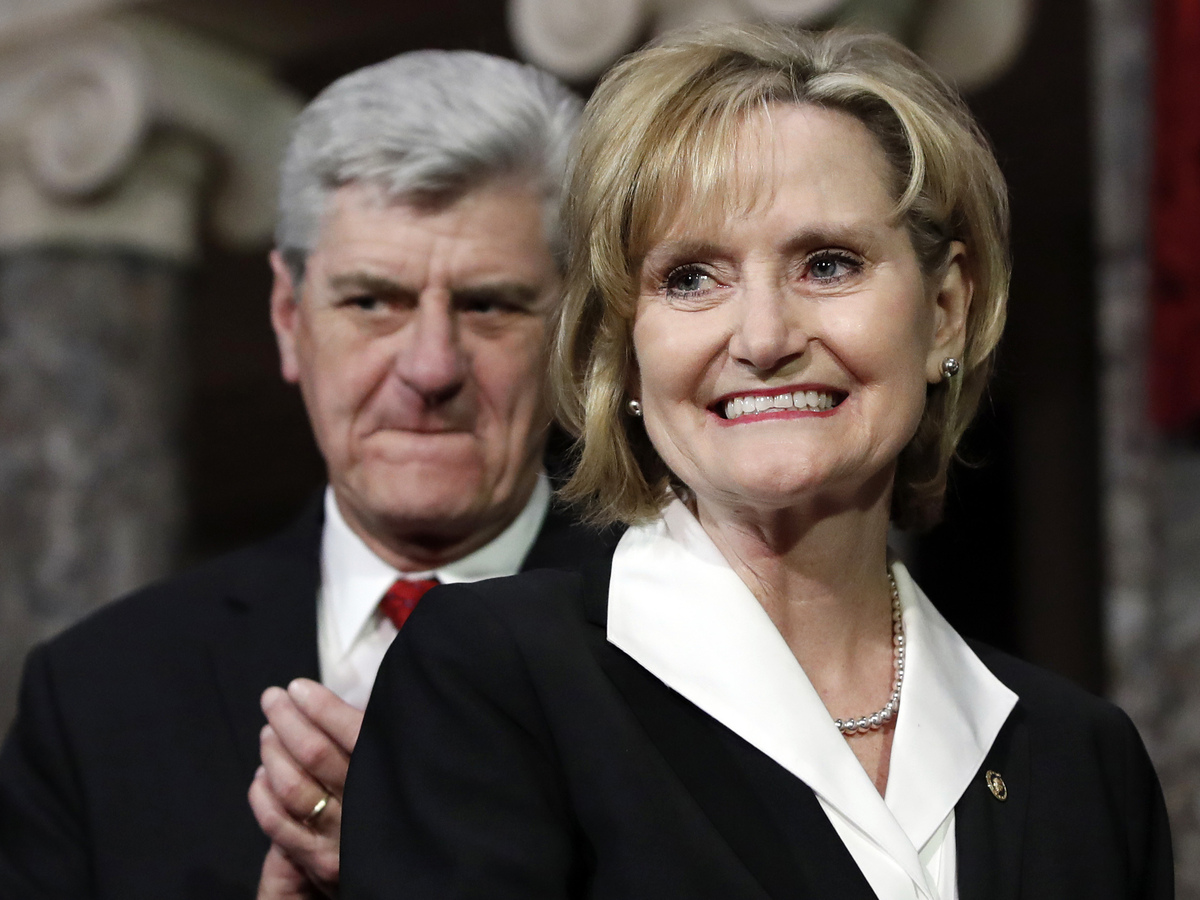 Mississippi Republican Cindy Hyde-Smith at her ceremonial swearing-in at the Capitol on Monday. With her is Mississippi Gov. Phil Bryant.

Mississippi's new senator is making a name for herself in the state's history books as the first woman to represent the Magnolia State on the Hill.

Cindy Hyde-Smith landed the spot as Mississippi's junior senator last month, when Gov. Phil Bryant, also a Republican, appointed her to fill the vacancy left by Sen. Thad Cochran's retirement. The appointment came in spite of calls from GOP leaders, including President Trump and Senate Majority Leader Mitch McConnell, for Bryant to appoint himself, according to The Washington Post.

Cochran retired after a 40-year career for health reasons and officially left on April 1. Hyde-Smith was sworn in Monday by Vice President Pence.

The Senate Hyde-Smith is joining has more women than ever before. She brings the count to 23 — a record.

The former Democrat enters office and steps onto the campaign trail at the same time as she will be fighting to maintain her appointed Senate seat in November. In fact, she got a campaign website before an official Senate site.

The 58-year-old presents herself as a strong, "unwavering" Trump supporter who is committed to putting the needs of her fellow Mississippians first. Her campaign website touts Hyde-Smith as someone with a "strong social conservative voting record with a 100 percent pro-life rating [who is] a lifetime member of the NRA."

In a video tweeted Monday, she calls her first day a "great morning" that is "pretty historic in my life, for sure, and for the state of Mississippi" and tells constituents how ready she is to be their senator.

I couldn’t be more honored to serve the people of Mississippi. Thank you for all your prayers and kind words as I get sworn in today. #Cindy2018 pic.twitter.com/xDGPW7D9cf

According to her website, her family has farmed for generations and she has raised cattle with her husband for years.

Hyde-Smith and her family live in Brookhaven, Miss., a town of just over 12,300 people, and belong to a Baptist church there.

With Hyde-Smith's swearing-in, Vermont is now the only state that has never sent a woman to represent it on Capitol Hill. (That said, Mississippi still has yet to elect a woman to the House or Senate.)

Mississippi has been an outlier among Southern states in terms of women in Congress. Georgia sent Democrat Rebecca Latimer Felton to the Senate for one day in 1922. Arkansas was represented in the Senate by Hattie Wyatt Caraway for 13 years starting in 1931, Louisiana followed with Rose McConnell Long in 1936 and Alabama with Dixie Bibb Graves in 1937.

Hyde-Smith served as a state senator from 2000-2012, but in 2011 she ran for Mississippi commissioner of agriculture and commerce and won — the first woman to ever be elected to that state position. She was elected again in 2015.

Hyde-Smith has had to forge a new path as a woman in Mississippi politics. But being a woman won't necessarily hold her back in the next election — voters will choose the the candidate most closely associated with their party, says Victoria DeFrancesco Soto, a lecturer at the LBJ School of Public Affairs at the University of Texas, Austin.

She says that when it comes to voters, "partisanship is the dominant factor." Gender may play a role later, but party is the trump card.

And with the Republican Party, it might come down to the Trump card.

Despite her professed dedication to the president, Hyde-Smith's appointment hasn't been endorsed by Trump.

Mississippi will hold a special election for the seat on Nov. 6, the same day as the general election. But there's no primary for the special election and if no candidate wins a majority, the two front-runners will advance to a second runoff vote on Nov. 27.