Accessibility links
White House: Robert Mueller Is Overreaching And Trump Has The Power To Fire Him White House spokeswoman Sarah Sanders would not say whether President Trump plans to remove Robert Mueller. Under Justice Department rules, a special counsel can only be fired for "good cause." 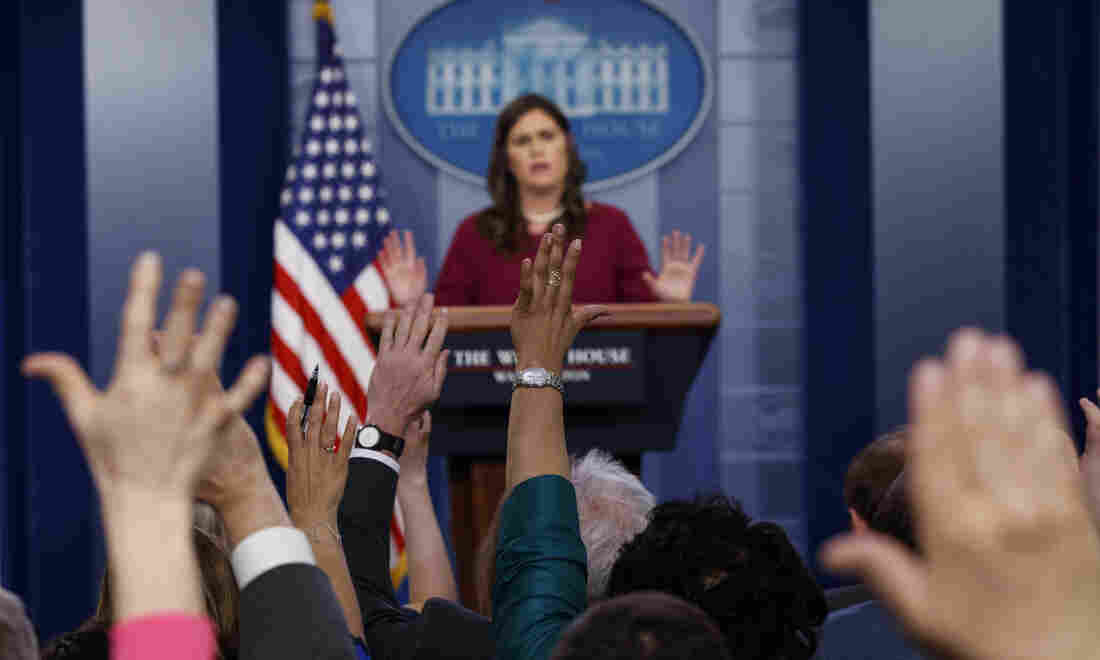 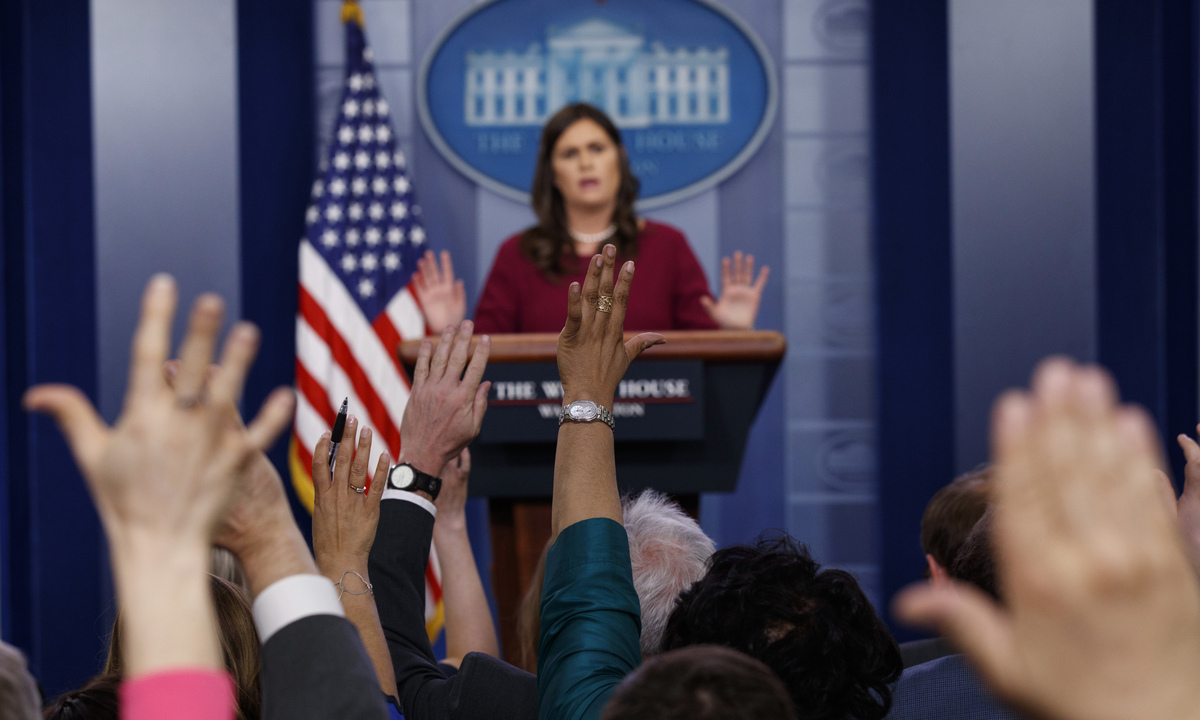 White House press secretary Sarah Sanders said at a briefing on Tuesday that President Trump was frustrated by the special counsel's investigation.

Her statement to reporters did little to tamp down speculation that Trump may seek to fire Mueller — an authority that Sanders says Trump enjoys.

Federal agents raided the office of Trump's longtime personal attorney, Michael Cohen, on Monday following a referral from Mueller. The targeting of Cohen prompted a furious response from Trump, who said Monday that the raid represented an "attack on our country."

Asked about Trump's comments, Sanders said at a White House briefing on Tuesday that Trump was frustrated by the special counsel's investigation. She also seemed to assert that the president has the authority to fire Mueller directly — as opposed to, for example, needing to instruct Deputy Attorney General Rod Rosenstein to do so.

"We've been advised that the president certainly has the power to make that decision," Sanders said. She would not say whether firing Mueller is under consideration.

The White House and Trump's lawyers have in the past repeatedly said Trump was not planning to fire Mueller. Legislative leaders including House Speaker Paul Ryan, R-Wis., have said they've "received assurances" that Mueller's job is secure.

Trump dined Tuesday evening with Harvard law professor Alan Dershowitz, reports NPR's Mara Liasson, who reached him by phone Tuesday. Despite the developments in the Mueller investigation, Dershowitz said he was there to talk about the Middle East, which he has done previously with Trump – and did not discuss the Mueller investigation. That being said, he noted that if he were the president, he would not fire anyone or participate in a sit-down interview with Mueller — unless he had to. Dershowitz, who has appeared on cable news critical of the investigation, said the president did not seem angry or distracted. He declined to say who else attended the dinner.

Ty Cobb, the White House lawyer dealing with the special counsel investigation, has not responded to NPR requests for comment on Mueller's future since the Cohen raid.

Under Justice Department rules, a special counsel can only be fired for "good cause," and some legal experts say that to remove Mueller, Trump would have to go through Rosenstein, who appointed Mueller after Attorney General Jeff Sessions recused himself from investigations of the 2016 election.

Trump had harsh words for Sessions and Rosenstein on Monday, but Sanders would not say whether Trump would take any action to move them from their posts.

Senate Minority Leader Chuck Schumer, D-N.Y., said it "looks more and more like a possibility" that the president will move to fire Mueller and shut down the investigation.

"We Democrats are urging our Republican colleagues to work with us now to pass legislation to protect his investigation and head off a constitutional crisis that would be devastating to this country. Let's not wait until it's too late," Schumer said.

There are several bipartisan Senate bills intended to protect Mueller. Sens. Chris Coons, D-Del., and Thom Tillis, R-N.C., introduced legislation last August that would create a process to let a fired special counsel appeal the removal before a panel of three federal judges within 14 days of the firing.

If the judges ruled the firing was without cause, the special counsel would be reinstated immediately.

"It is long past time for us to move forward with this legislation," Coons said on Tuesday.

Republicans' posture has not changed since the last flare-up about Mueller's job security.

GOP leaders have maintained that Mueller's investigation should run its course without interference and that there is no need to move forward with legislation to protect Mueller because they do not believe the president will make any moves to fire him.

"It's still my view that Mueller should be able to finish his job, I think that's the view of most people in Congress," said Senate Majority Leader Mitch McConnell, R-Ky.

The political backlash that might follow a move by Trump to get rid of Mueller would be so intense that the White House has a powerful incentive not to attempt it, the thinking goes. Senate Judiciary Committee Chairman Chuck Grassley, R-Iowa, said Tuesday that Trump would be committing "suicide."

That's why, for McConnell, there is no need for Senate Republicans to pass a bill.

Tamara Keith contributed to this story.