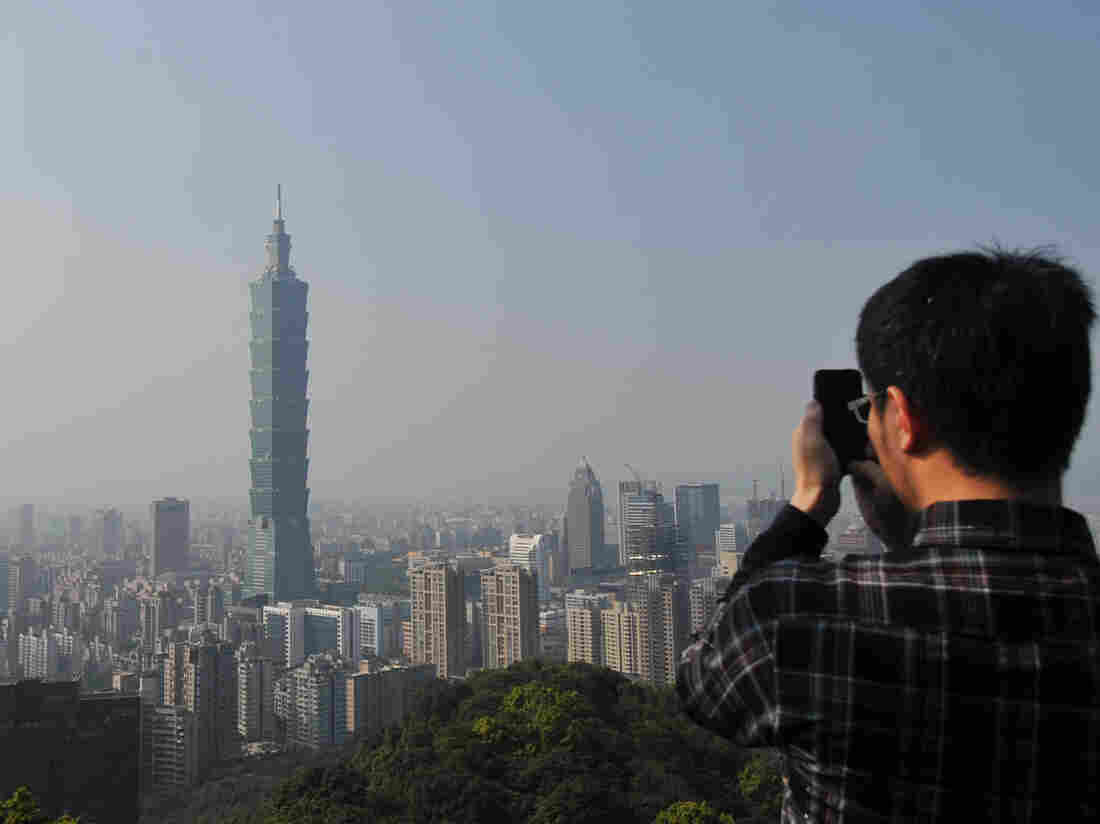 A tourist takes photos of Tower 101 in Taipei in 2013. Policy experts say the Taiwan Travel Act is a provocation for China because more visits to Taiwan by high-ranking U.S. officials could help boost the island's international profile. Mandy Cheng/AFP/Getty Images hide caption 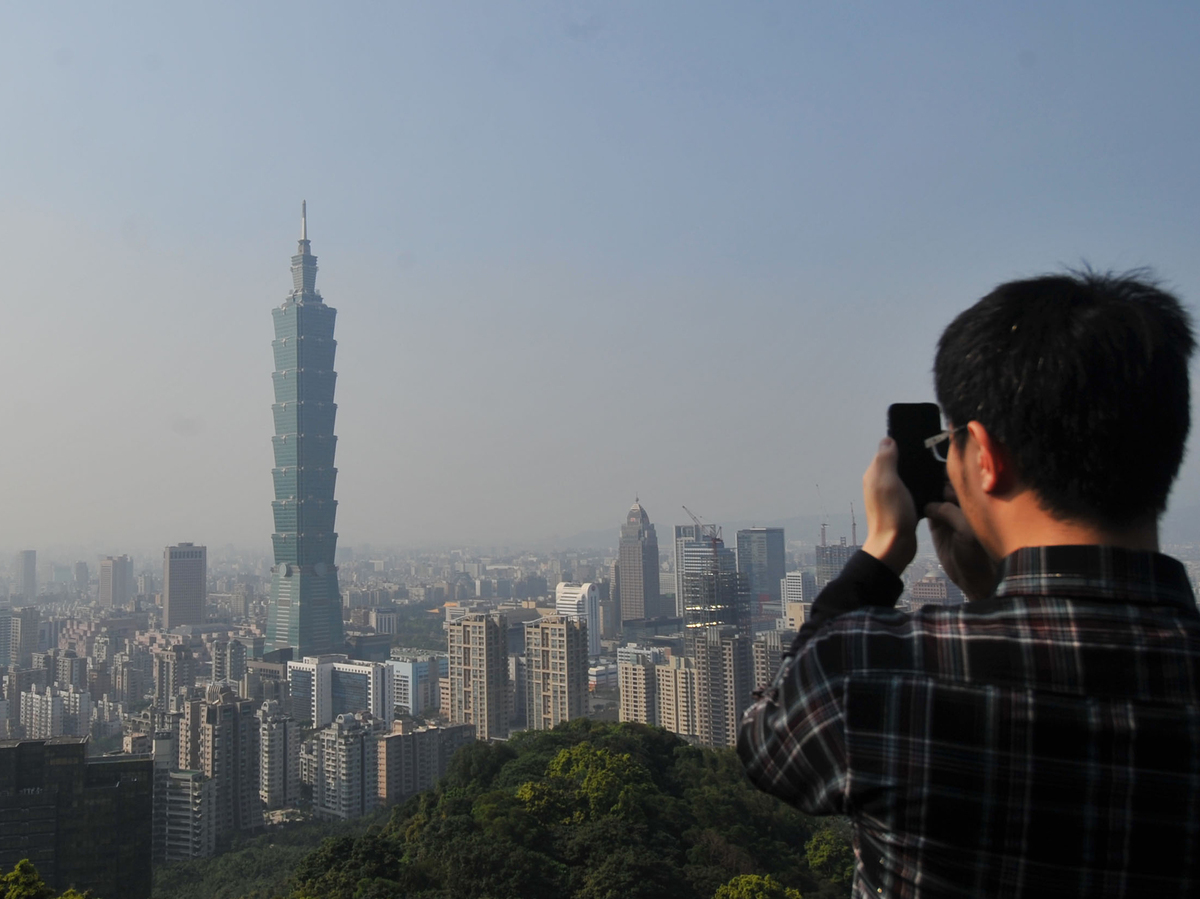 A tourist takes photos of Tower 101 in Taipei in 2013. Policy experts say the Taiwan Travel Act is a provocation for China because more visits to Taiwan by high-ranking U.S. officials could help boost the island's international profile.

China considers Taiwan a rogue province in defiance of Chinese sovereignty and for decades has insisted that other countries abide by the "one China" policy and not recognize Taiwanese sovereignty. The Taiwan Travel Act, which Trump signed after unanimous votes in both the House and Senate, represents another irritant for China amid the ongoing trade dispute with the U.S.

The shift in U.S. policy could also affect the situation in North Korea because the U.S. still needs China's help in resolving tensions over Pyongyang's nuclear program.

The legislation is legally nonbinding, but policy experts say it is a provocation for China because more visits to Taiwan by high-ranking U.S. officials, and the reverse, could help boost the island's international profile. The Chinese also see the law as a U.S. attempt to gain leverage on trade, says Bonnie Glaser, senior adviser for Asia at the Center for Strategic and International Studies.

"The Chinese think that the United States is simply using Taiwan as a card to try and put pressure on China on trade," she tells Here & Now's Peter O'Dowd. "But I think that what the United States really just wants is more protection for Taiwan. We want to give Taiwan more dignity, and we do want to strengthen Taiwan's security."

A U.S. Cabinet-level official is expected to lead the reopening of the American Institute in Taiwan, the de facto U.S. Embassy, when the Taipei office moves to a new building in June. Not many U.S. officials have visited the country, but Gina McCarthy, who headed the Environmental Protection Agency during the Obama administration, traveled there in 2014.

The U.S. doesn't often "authorize these trips because the policy judgment is that the costs in relations with China would outweigh the benefits in relations with Taiwan," Douglas Paal, former U.S. representative to Taiwan from 2002 to 2006, told Reuters.

Glaser says China could view the travel act as a violation of the Three Joint Communiques between the two governments, in which the U.S. acknowledged Beijing's position that there is but one China and that Taiwan is a part of China.

That agreement also says that the U.S. "will preserve only unofficial relations with Taiwan," Glaser explains. "And yet, I would say Washington and Beijing have always had different definitions of what is unofficial."

The U.S. does not have official ties with Taiwan, but it does help the country with defense and supplies most of the island's weapons. Taiwan's Foreign Ministry called the signing by Trump "a friendly move" and expressed its intention to grow the relationship with the U.S., Reuters reported.

Since the pro-independence Democratic Progressive Party took power in Taiwan in 2016, relations between the self-ruled island and China have grown more hostile. Chinese President Xi Jinping on Tuesday urged Taiwan's business community to denounce the idea of independence for the island, according to state media reports.

"Friends in the island's business community should take a stand and firmly maintain the '1992 consensus', oppose 'Taiwan independence' and firmly promote the peace and stability of cross-straits relations," Xi told the chairman of a foundation that promotes trade between China and Taiwan.

In fact, Taiwan's export-reliant economy could suffer a serious blow if the U.S. and China launch a trade war. China is Taiwan's largest trade partner, with nearly 30 percent of its exports — which are a key part of the global supply chain for the tech industry — going to China.

The appointment of former Ambassador John Bolton as Trump's new national security adviser also stands to further complicate the situation. Bolton wrote in The Wall Street Journal in January that the U.S. should "play the Taiwan card" against China, suggesting the U.S. would lend Taiwan full diplomatic status if China doesn't back off in the South China Sea.

Earlier this week, China reportedly placed communications-jamming equipment in the South China Sea to assert its dominance in the region. Glaser says that if the Chinese feel threatened they could use military force against Taiwan.

"If the Chinese decide that there's a lot of nationalist pressure on their leadership and they're losing legitimacy of the Chinese Communist Party they could decide to attack Taiwan," she says. "And for the United States to defend Taiwan would be very, very challenging because we're pretty far away and the amount of forces that we have in Japan and other places in the region is limited."

Corrected on April 10, 2018: A previous version of this story incorrectly said that the U.S. had pledged in the Three Joint Communiques agreement to maintain the Chinese position regarding Taiwan. The U.S. acknowledges China's position but made no such pledge.