Accessibility links
States Turn To National Guard To Help Protect Future Elections From Hackers Election officials have traditionally focused on a smooth voting experience, but after the 2016 elections, they've also had to focus on cybersecurity. 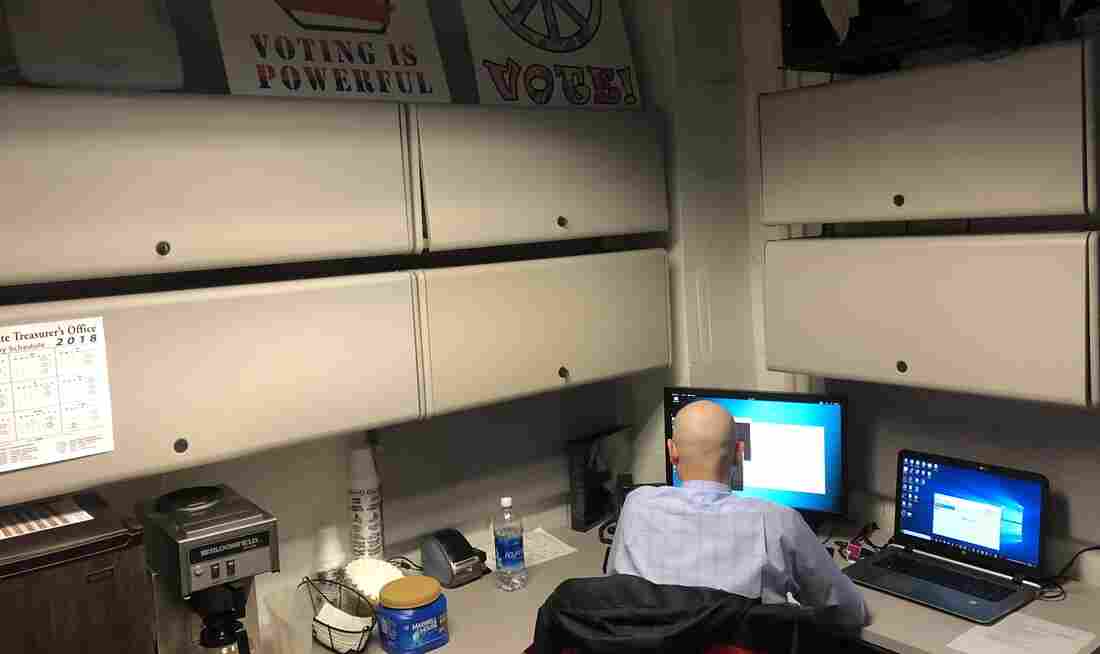 A member of the West Virginia National Guard works in the basement of the state Capitol in Charleston, W.Va., on secondment to the Secretary of State's office to work on cybersecurity around state elections. Dave Mistich/West Virginia Public Broadcasting hide caption 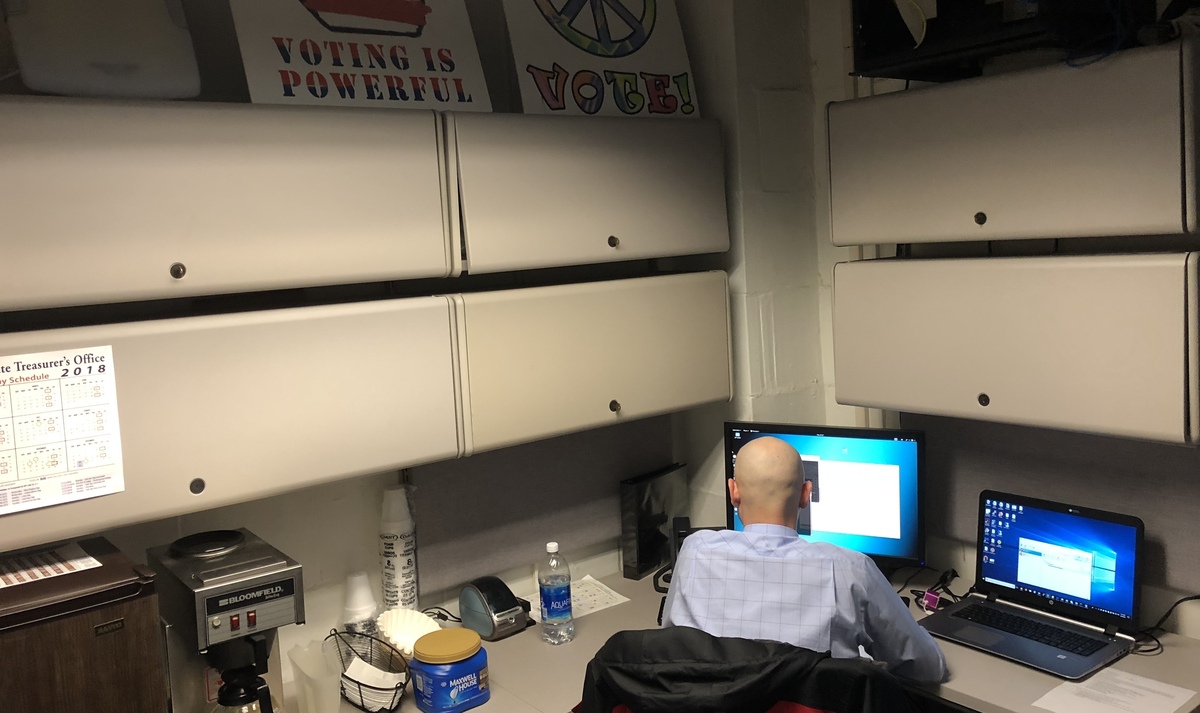 A member of the West Virginia National Guard works in the basement of the state Capitol in Charleston, W.Va., on secondment to the Secretary of State's office to work on cybersecurity around state elections.

In elections past, the integrity of the vote was protected by poll workers and election officials. But in 2018 and likely beyond, elections are being protected by people like the anonymous man who works in the basement of the West Virginia Capitol.

He's member of the West Virginia National Guard who is a cybersecurity specialist responsible for monitoring any computer-related threats to the state's elections. Since August of last year, he's been attached full time to the office of Secretary of State Mac Warner.

After Russian-backed hackers probed election-related systems in at least 21 states in 2016, election officials, whose focus has traditionally been on making sure that polling places run smoothly and that results are speedily reported, now have to focus on protecting their computer systems.

Oftentimes lacking those resources in-house, National Guard specialists have been called in to monitor vital election systems in a handful of additional states, including Colorado, Ohio and South Carolina.

Neither the West Virginia National Guard nor Warner's office would permit the soldier to speak on the record, but Warner emphasized how crucial the role is.

"We, just like every other government entity and people in business, are getting pinged all the time. Somebody is checking to see are there any open doors [or] open windows for targets of opportunity," Warner said.

Warner's current use of the National Guard builds upon his predecessor, Natalie Tennant, who enlisted their cybersecurity expertise to scan the state's election systems for vulnerabilities and patch them in the final stretch of the 2016 election.

In January 2017, the outgoing Obama administration designated elections as part of the country's critical infrastructure. That meant new federal resources and scrutiny.

The Department of Homeland Security is working to give security clearances to state officials so they can receive intelligence briefings and assessments. Warner, like other state-level election officials, is in the middle of a months-long process of getting cleared.

Using Guard soldiers who already have a high-level clearance, "is a way to bridge the gap without causing a problem in that security system process," said West Virginia National Guard Adjutant General James Hoyer.

State officials are trying to figure out how to prepare for a threat they had never before anticipated, said Eric Rosenbach, a former Defense Department official who now directs a program on election security at Harvard's Belfer Center for Science and International Affairs.

"These state election officials are the pointy tip of the spear for nation-state actors like the Russians trying to attack our democracy. That's never before been their job," said Rosenbach. "If part of [the National Guard's] responsibilities is to protect the things most precious to a state — it kind of makes sense that you would want them to support an effort like that."

While the regular military can't be involved in domestic law enforcement due to a post-Civil War federal law known as Posse comitatus, National Guard soldiers are under the jurisdiction of the governor unless they're activated by the federal government.

"The threat is new and we need to evolve with the times — as long as it still fits in the right legal framework and we're doing something that, you know, all Americans would agree are part of our democratic traditions," Rosenbach said.

"The cybersecurity arena is one of those where we as public officials have to get it right every time. The hackers only have to penetrate one time to do substantial damage," Warner said. "So, it's a foot race that we have to stay one step ahead and it never ends. It just goes on and on."

So far, the National Guard has monitored a few small local elections in West Virginia and Warner's office says they have yet to receive a threat that has risen to a level of what they called "actionable."

With the state's primary election slated for May 8, the Guard's first big election cybersecurity test is already underway.