Accessibility links
Wendy Vitter, Judicial Nominee, Gets Tough Questions From Senators On Abortion At her confirmation hearing on Wednesday, Vitter was grilled by Democratic senators about her failure to disclose public statements of controversial anti-abortion views. 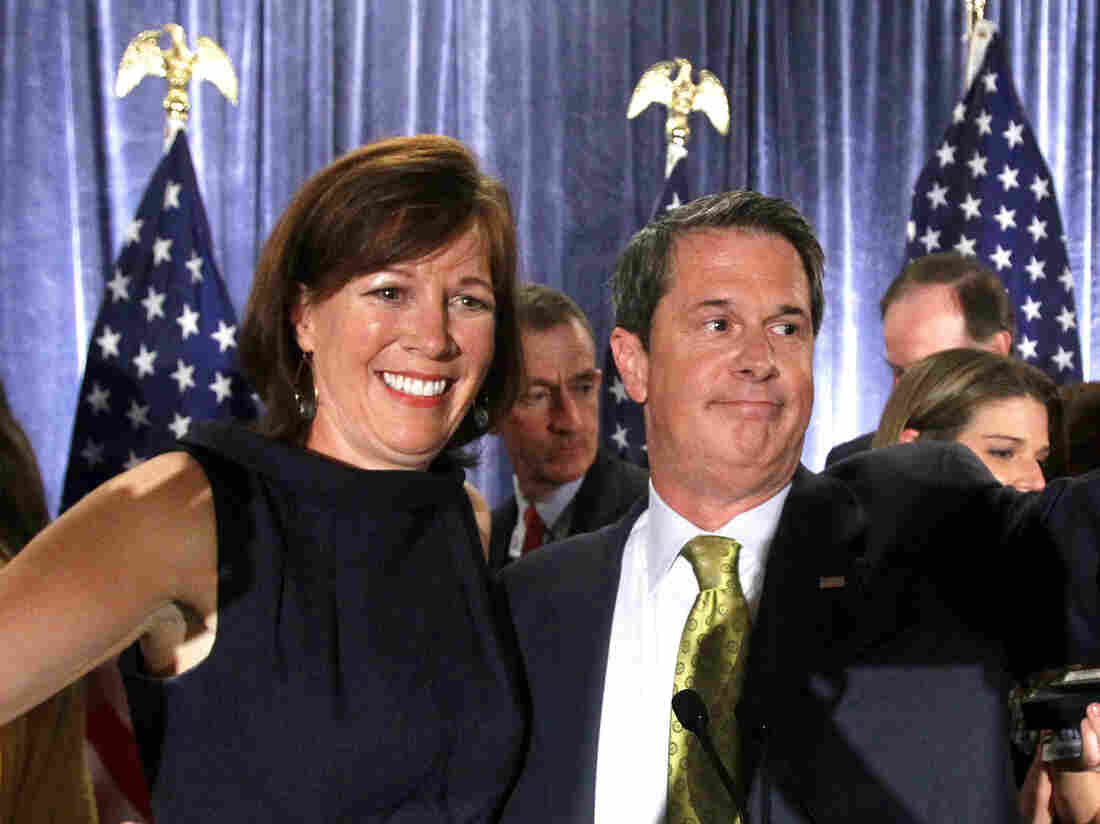 Wendy Vitter, with her husband, David Vitter, after he was reelected to the Senate in 2010 despite being linked to the "D.C. Madam" scandal. Wendy Vitter is now nominated for a judgeship. Patrick Semansky/AP hide caption 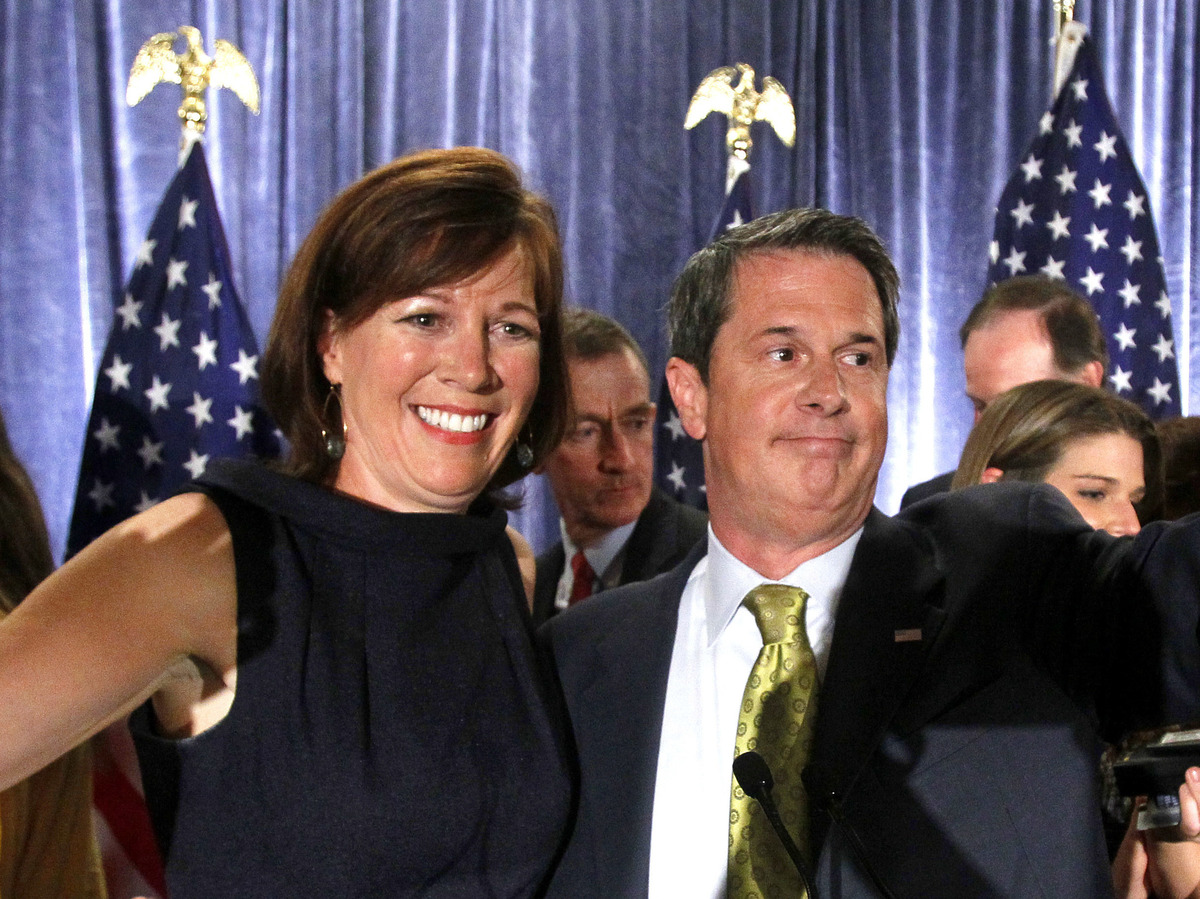 Wendy Vitter, with her husband, David Vitter, after he was reelected to the Senate in 2010 despite being linked to the "D.C. Madam" scandal. Wendy Vitter is now nominated for a judgeship.

Wendy Vitter, nominated by President Trump for a federal judgeship, tried Wednesday to walk back several controversial comments she made about abortion and birth control.

Questioned by skeptical Democrats at her confirmation hearing, she maintained she could "put aside" her long-held "pro-life" advocacy, and as a judge enforce the Supreme Court's Roe v. Wade decision on abortion rights.

In particular, Vitter sought to distance herself from a brochure she had appeared to endorse while leading a panel at a pro-life conference in 2013. The panel was called "Abortion Hurts Women," and the brochure promoted a variety of unsubstantiated claims linking birth control pills to breast cancer, cervical and liver cancers, and "violent death."

On this last point — violent death — the brochure alleged that women who take oral contraceptives prefer men with similar DNA, and that women in these partnerships have fewer sexual relations, leading to more adultery, and "understandably ... violence."

All of these claims have been debunked by leading medical and scientific organizations, as Democratic Sen. Mazie Hirono of Hawaii observed.

"You urged the audience to distribute the materials making these dangerous claims. ... Do you believe the claims that Dr. Lanfranchi makes that abortion causes breast cancer and that birth control causes women to be assaulted and murdered?" she asked.

Vitter asserted she had "no background," was "not a medical professional" and "had never heard those opinions before."

"You called them facts," Hirono countered.

"I did say 'facts,' and then I stopped myself and said 'brochure,' " replied Vitter.

In fact, what she said was, "Go to Dr. Angela's website, Breast Cancer Prevention Institute, download it, and at your next physical, you walk into your pro-life doctor and say, 'Have you thought about putting these facts or this brochure in your waiting room?' Each one of you can be the pro-life advocate to take that next step. That's what you do with it."

Hirono persisted: "Judges have to apply common sense. Does it even make sense to you that people who use birth control pills would be more likely to be assaulted or murdered?"

After a pause, Vitter conceded that it did not make sense.

Other Democratic senators pointed to remarks that Vitter made at a rally protesting the construction of a Planned Parenthood clinic in Baton Rouge, La., where she accused Planned Parenthood of "killing over 150,000 females a year."

Sen. Richard Blumenthal, D-Conn., asked Vitter pointedly, "Do you stand by the statement that Planned Parenthood kills 150,000 women a year?"

When Vitter replied that she was "pro-life" and would "set aside" her own religious or personal views, Sen. Blumenthal was unsatisfied. "I'm really not asking you about setting aside your personal views," he said. "I'm asking you very simply. You said Planned Parenthood kills 150,000 females. Do you stand by that statement? It's a yes or no question."

"My pro-life stance has been made very clear," replied Vitter.

Vitter became the subject of particular scrutiny not just because of her strong advocacy, but because she initially failed to disclose to the Senate Judiciary Committee public appearances at which she made some of her most controversial statements.

"Did you omit these materials because they would cause you to face difficult questions, like the ones I'm asking, about your judgement and temperament at this confirmation hearing?" asked Hirono.

"My life has been an open book," Vitter said. "It was always my intent to provide this committee with a full background and explanation of both my personal and professional life."

Leading up to Wednesday's hearing, Democrats pointed out that Republicans had a zero-tolerance policy for such omissions during the Obama years. When law professor Goodwin Liu, a prolific speaker and writer, left out dozens of his often-repetitious speeches, Republicans on the Senate Judiciary Committee were so outraged that they blocked his nomination.

"Title 18, Section 1001 makes it a criminal offense to make a false statement to the government. Two years in jail. A felony," Sessions said at an April 15, 2010, hearing.

Vitter's failure to disclose, though fewer in number, was, in the eyes of her critics, more serious than Liu's. They see her omissions not only as an attempt to hide her most controversial statements, but they also argue that some of those statements go to the heart of what a trial judge is supposed to do — evaluate evidence.

Vitter repeated throughout the hearing, "I am pro-life," but continued to assert that she would set aside her "personal and religious" beliefs when serving as a judge.

Sen. Kamala Harris, D-Calif., pointing to President Trump's frequently repeated pledge to appoint "pro-life judges," asked Vitter, "From your perspective what does it mean to be a pro-life judge?"

Vitter said she could "not comment on that," but that she would be bound by the precedent of Roe v. Wade.

However, at the 2013 "Abortion Hurts Women" panel, Vitter spoke admiringly about laws adopted in Texas regulating abortion that were then being challenged in the courts.

At the time, Texas argued that the laws were enacted to protect women's health, but Vitter appeared to understand the real purpose behind the laws. She praised Texas for "making great strides in making it very difficult to get abortions."

"And we're going to be right there," Vitter proclaimed, "because pro-life forces are there."

The Supreme Court ultimately struck down the Texas laws because the court said they interfered with a woman's constitutional right to terminate a pregnancy and, in fact, made the procedure less safe.

Vitter is well known in Louisiana. She is the wife of former Sen. David Vitter, R-La., implicated in the "D.C. Madam" sex scandal in 2007. He accompanied his wife to Wednesday's hearing.

Wendy Vitter has been a significant presence in Louisiana politics, sticking with her husband when the sex scandal became public. 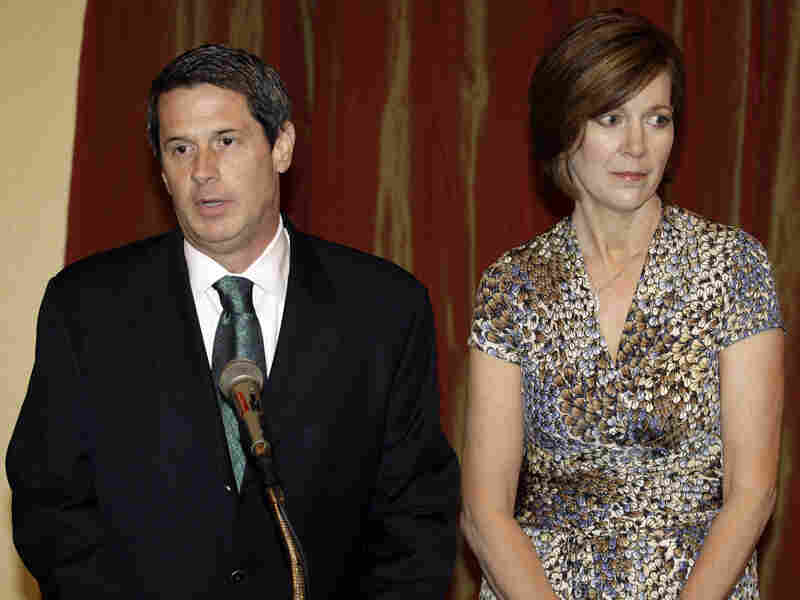 Then-Sen. David Vitter, R-La., speaks to the media with his wife Wendy in 2007. It was his first public appearance since his phone number was linked to a Washington escort service. Alex Brandon/AP hide caption 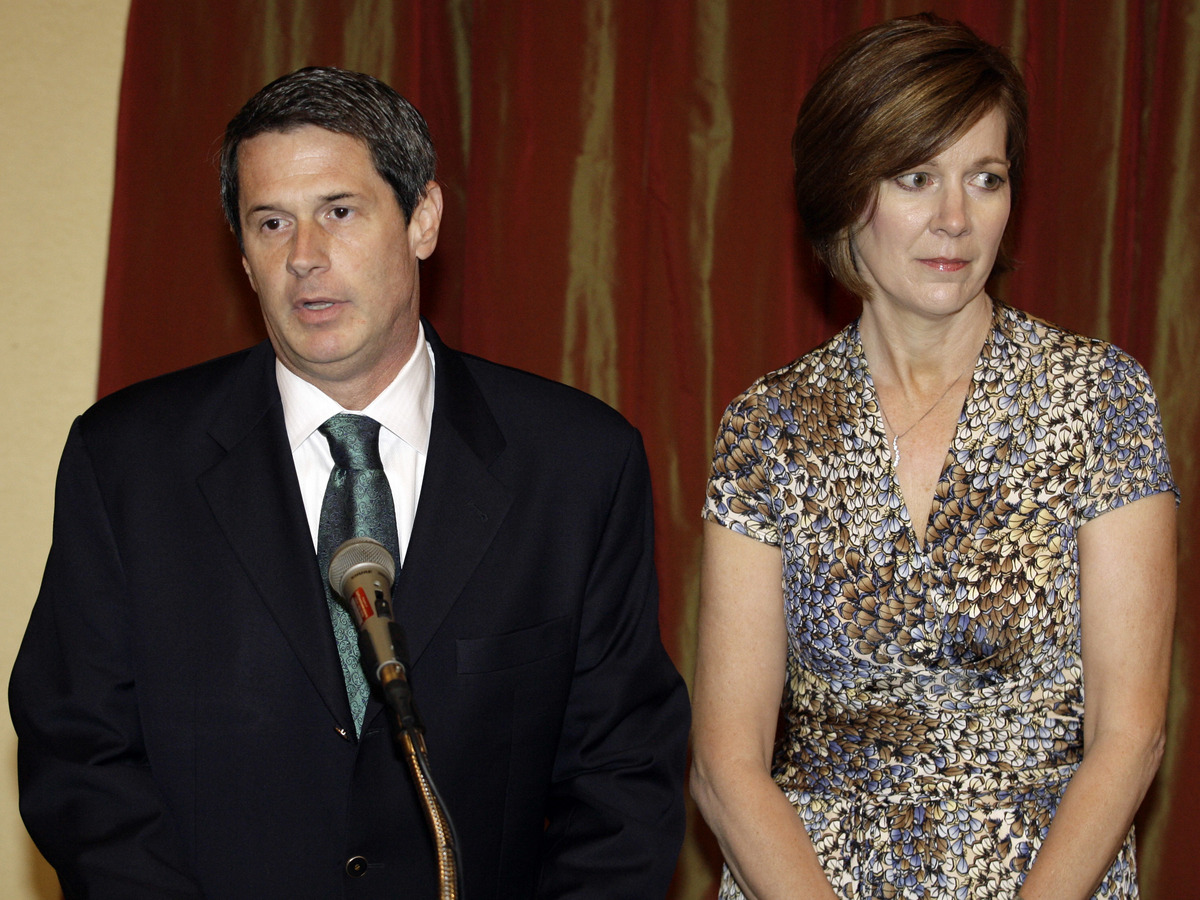 Then-Sen. David Vitter, R-La., speaks to the media with his wife Wendy in 2007. It was his first public appearance since his phone number was linked to a Washington escort service.

After graduating from Tulane Law School in 1986, she joined the New Orleans District Attorney's Office, which for years has been plagued with charges of misconduct.

In 1990, she became chief of trials. But after 1993, she left the practice of law for 19 years, instead helping to run her husband's political campaigns.

In 2012, she became general counsel for the Roman Catholic Archdiocese of New Orleans.

The American Bar Association gave Vitter's nomination its lowest qualified rating, with a minority of those reviewing her record rating her "unqualified."

That said, Vitter received a boost on Monday when New Orleans Mayor Mitch Landrieu, a Democrat, backed her nomination.

He wrote in a letter to the Judiciary Committee that he "can personally attest to her strong moral character," and said, "I trust that Wendy will uphold the law in a fair and honest manner and would be an asset to the Federal bench of the Eastern District of Louisiana."

And with the filibuster rule now abolished for all judicial nominees, all Vitter needs is 51 votes to win confirmation. Republicans, so far, have not bucked the president on any judicial nomination that's come to a vote.

Three nominees have withdrawn their names from consideration, including Brett Talley, who continues to supervise judicial nominations at the Justice Department. Neither Talley nor Matthew Petersen, a former member of the Federal Election Commission, had any significant trial experience, and withdrew when Louisiana Sen. John Kennedy, a Republican, made clear he would not support their nominations.

Kennedy has proved a skillful questioner of judicial nominees, but his questions of Vitter were all supportive. He succeeded David Vitter, the nominee's husband, in 2017.