'This Is Going To Be A Challenging Year': Ryan Retirement Adds To GOP Worries

'This Is Going To Be A Challenging Year': Ryan Retirement Adds To GOP Worries 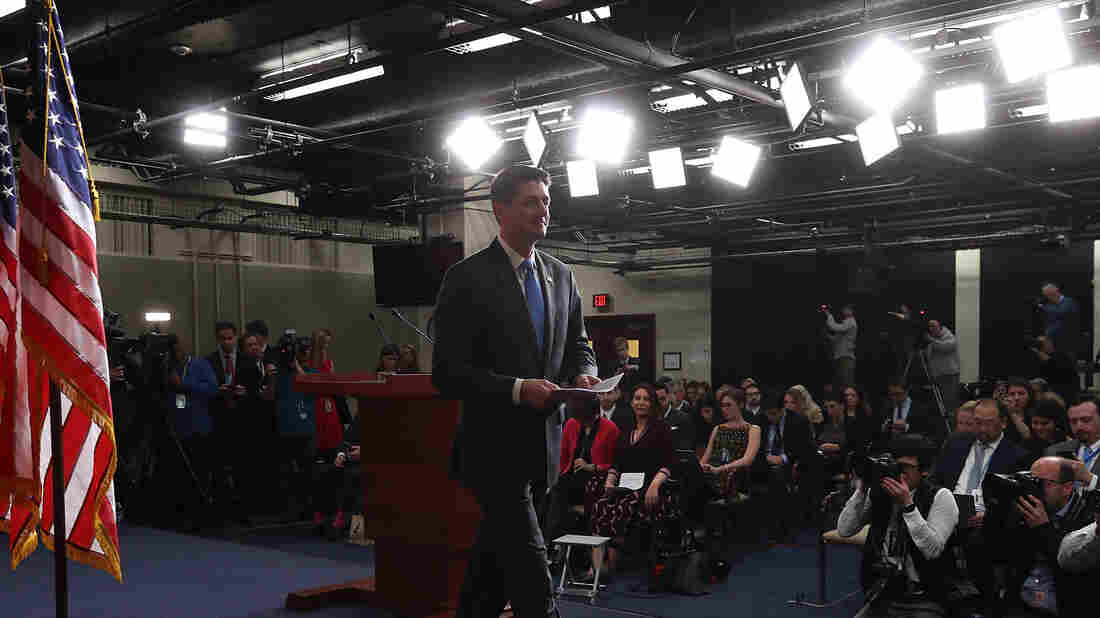 House Speaker Paul Ryan, R-Wis., walks away after announcing that he will not seek re-election for another term in Congress, during a news conference at the Capitol Wednesday. Mark Wilson/Getty Images hide caption 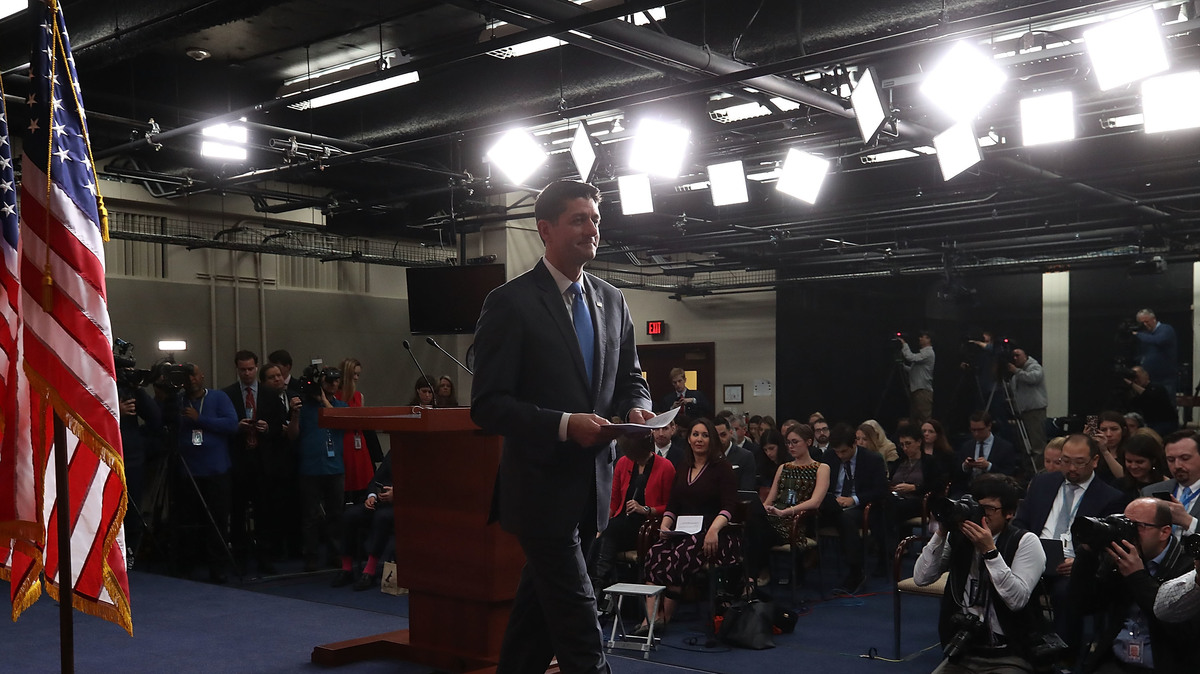 House Speaker Paul Ryan, R-Wis., walks away after announcing that he will not seek re-election for another term in Congress, during a news conference at the Capitol Wednesday.

As House Republicans poured out of the closed-door meeting where Speaker Paul Ryan, R-Wis., told them he won't run for re-election this year, there was a constant theme: Things are on track. All is well. And a sitting speaker's decision to call it quits after less than three years in charge of the House chamber shouldn't be taken — at all — as a sign the GOP is facing an increasingly challenging election cycle.

"I go back to my district and people couldn't be more ecstatic about the things we're doing," Florida Rep. Brian Mast said. "I'm not concerned about it at all."

That's despite the fact that Ryan is just the latest of a record number of Republicans to forgo a run for re-election this fall.

Most Republicans said they were surprised by the timing of Ryan's announcement, but not that he was planning to leave. For months the speaker has battled rumors about his retirement. He began seriously considering leaving the post back in December, before Congress passed the sweeping tax overhaul he helped conceive, according to aides familiar with his thinking.

"It doesn't send a message at all" that Republicans are worried they'll lose the majority, insisted Pennsylvania Rep. Ryan Costello, one of the GOP lawmakers retiring in the face of a difficult-looking re-election campaign. "Others may try to spin it that way, but I don't see it that way."

Costello, Mast and most other Republicans stuck to their message in the hallways of Congress Wednesday morning, but speaking on background and away from cameras, many GOP lawmakers expressed concerns. The record number of retirements — up to 39 with Ryan's announcement — has already sent signals the party isn't confident in its chances. Adding a sitting House speaker in the prime of his career to that list certainly makes that matter worse.

'No Regrets': House Speaker Paul Ryan Will Not Seek Re-Election

The symbolism and signaling matter to two important constituencies: donors being asked to bankroll House races, and party activists needed to knock on doors and reach out to the voters needed to win elections.

"Speaker Ryan sees what is coming in November, and is calling it quits rather than standing behind a House Republican agenda," said Tyler Law, a spokesman for the Democratic Congressional Campaign Committee, in a statement. "Stay tuned for more retirements as Republicans increasingly realize that their midterm prospects are doomed."

Democrats are feeling increasingly confident in their chances. In addition to the historically high number of Republican retirements, many of the other classic signs of a wave election are showing themselves: low approval ratings for the incumbent president, a consistent voter preference for the out-of-power party in polling questions and a growing enthusiasm gap among Democratic and Republican activists.

Last month, Democrat Conor Lamb won a special election in a Pennsylvania district so historically safe for Republicans that Democrats hadn't bothered to run a candidate in 2016 and 2014.

"My kids aren't getting any younger"

Ryan insisted the looming prospect of returning to the minority wasn't a factor in his decision. "You all know me: I didn't take this job to get the gavel in the first place. I'm not a guy who thinks about it like that," he said at a news conference. "This really was two things: I have accomplished much of what I came here to do. And my kids aren't getting any younger. And if I stay they're only going to know me as a weekend dad, and that's just something I constantly can't do. And that's really it right there."

The speaker also said President Trump's chaotic leadership style didn't factor into his retirement decision, but some members privately worry that it will be hard to escape the perception that the Republican Party is suffering from a crisis of unity and planning.

Conservatives Warn Speaker Ryan To Hold The Line On Immigration

A protracted leadership fight could make that worse. The absence of a clear successor to Ryan could allow an influential bloc of far-right conservatives to gain more power among House Republicans.

Members of the conservative House Freedom Caucus have grown frustrated that Ryan failed to fulfill promises to move Congress radically to the right after Republicans won complete control in Washington, D.C. Freedom Caucus Chairman Mark Meadows, R-N.C., told reporters Wednesday that leadership isn't on his "bucket list" but he refused to say whether he plans to run for speaker.

Meadows said many of the decisions will come down to whether Republicans are still in control of the House after the election in November. "If everyone knew who was going to be the majority party in November we'd be having very different discussions," Meadows said. "Not only on who is the speaker but who's going to be minority leader."

"This is going to be a challenging year," Pennsylvania Rep. Charlie Dent said.

Dent is among the ranks of retiring Republicans, and that status has led him to become much more blunt than many of his colleagues about how Trump has scrambled the GOP's identity and electoral prospects.

"I've said this many times: The litmus test for being Republican these days is not about any given set of ideals or principles. It's about loyalty to [President Trump]. And that's challenging. If you're a member of Congress right now, particularly in a swing or marginal district, and you go out there and you put some distance between yourself and the president, well guess what? The loyalists to the president say you're betraying him. If you put some distance with president, those in the Resistance movement will say you're a sycophant; it's never enough. So you're really in a no-win position if you're running in this cycle, for many of my colleagues in the marginal and swing districts."

And because of that, Dent doesn't see Ryan's retirement as having any direct effect on GOP candidates' chances this fall. "I believe each member's going to be running in their district in a pretty damn toxic political environment. We all know that," Dent said. "It's going to be a referendum on the president of the United States and his conduct in office. It's not about Paul Ryan."