Accessibility links
First-Ever Evictions Database Shows: 'We're In the Middle Of A Housing Crisis' Matthew Desmond estimates that 2.3 million evictions were filed in the U.S. in 2016 — a rate of four every minute. "Eviction isn't just a condition of poverty; it's a cause of poverty," he says. 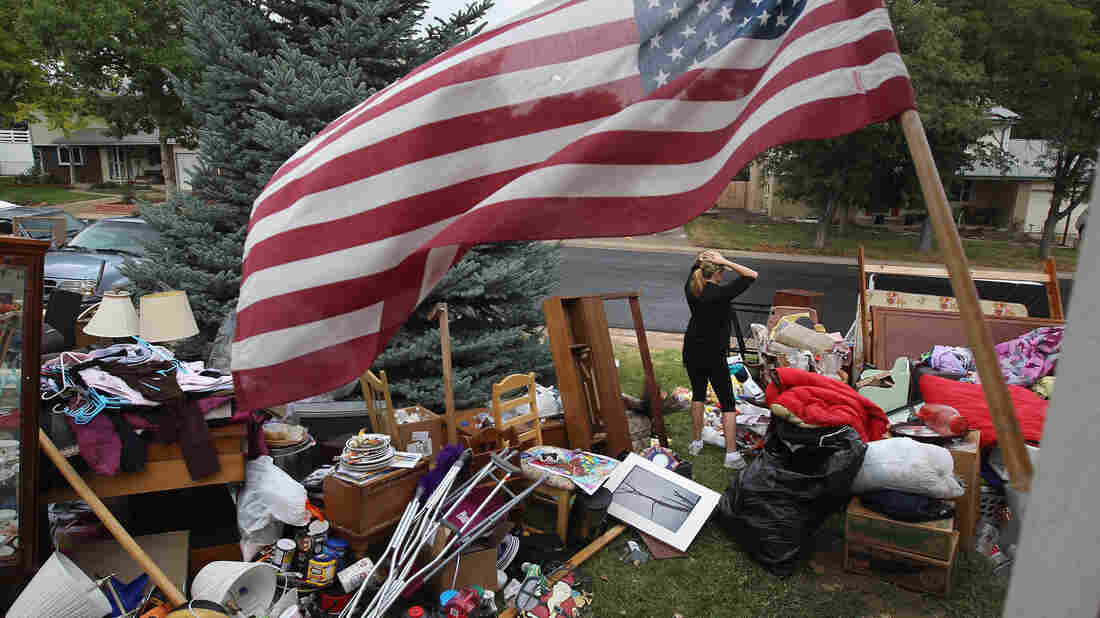 Julie Holzhauer stands among her family's possessions after being evicted from her home in Centennial, Colo., in 2011. John Moore/Getty Images hide caption 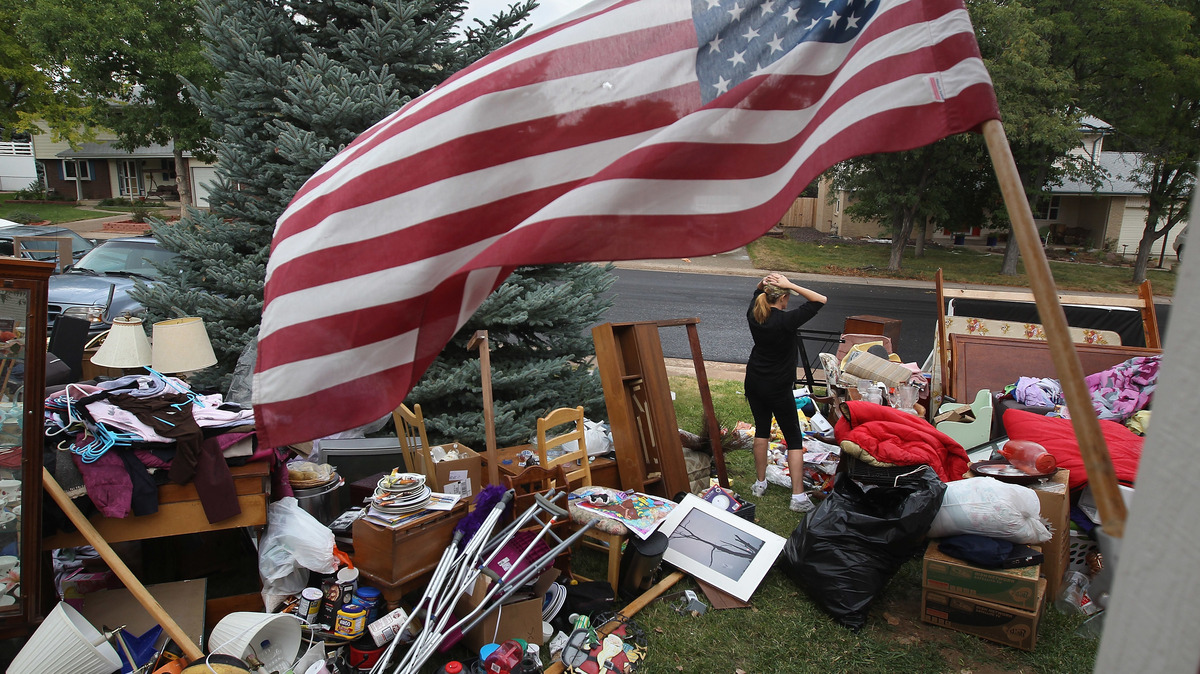 Julie Holzhauer stands among her family's possessions after being evicted from her home in Centennial, Colo., in 2011.

For many poor families in America, eviction is a real and ongoing threat. Sociologist Matthew Desmond estimates that 2.3 million evictions were filed in the U.S. in 2016 — a rate of four every minute.

Desmond won a Pulitzer Prize in 2017 for his book, Evicted: Poverty and Profit in the American City. His latest project is The Eviction Lab, a team of researchers and students at Princeton University dedicated to amassing the nation's first-ever database of eviction. To date, the Lab had collected 83 million records from 48 states and the District of Columbia.

"We're in the middle of a housing crisis, and that means more and more people are giving more and more of their income to rent and utilities," Desmond says. "Our hope is that we can take this problem that's been in the dark and bring it into the light." 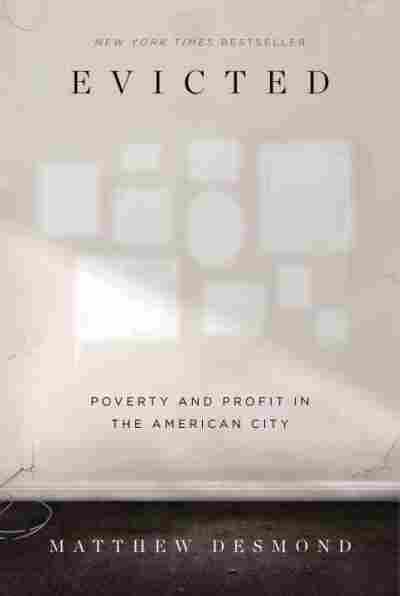 Poverty and Profit in the American City

On why eviction rates are so high

Incomes have remained flat for many Americans over the last two decades, but housing costs have soared. So between 1995 and today, median asking rents have increased by 70 percent, adjusting for inflation. So there's a shrinking gap between what families are bringing [in] and what they have to pay for basic shelter.

And then we might ask ourselves: Wait a minute, where's public housing here? Where's housing vouchers? Doesn't the government help? And the answer is, it does help, but only for a small percentage of families. Only about 1 in 4 families who qualify for housing assistance get anything. So when we picture the typical low income American today, we shouldn't think of them living in public housing or getting any kind [of] housing assistance for the government, we should think of folks who are paying 60, 70, 80 percent of their income and living unassisted in the private rental market. That's our typical case today.

On the effects of eviction

We have studies that show that eviction is linked to job loss. ... It's such a consuming, stressful event, it causes you to make mistakes at work, lose your footing there, and then there's just the trauma of it — the effect that eviction has on your dignity and your mental health and your physical health. We have a study for example that shows that moms who get evicted experience high rates of depression two years later.

On how landlords go about evicting tenants

It varies a lot from city to city. In some places you can evict someone for being a penny short and a day late and the process is very efficient and quick. In other cities it's a lot longer and laborious and it's much more work. We're only also talking about formal evictions, too. These are evictions that go through the court and there are 101 ways for landlords to get a family out. Sometimes landlords pay a family to leave. Sometimes they change their locks or take their door off, as I witnessed one time in Milwaukee. So those evictions aren't even captured in these numbers that we have — which means the estimates that we have are stunning, but they're also too low.

Welcome To Rent Court, Where Tenants Can Face A Tenuous Fate

In A High-Rent World, Affordable And Safe Housing Is Hard To Come By

On the benefits of stabilizing families and decreasing evictions

The more I think about this issue, the more I think that we've really had a failure of our imagination — and maybe it's linked to a failure of our compassion. ... When we ask, What can be done if a tenant doesn't pay rent? Doesn't that tenant have to be evicted? A thousand things can be done. There's so much better ways of dealing with this issue than we currently do. ...

Stabilizing a home has all sorts of positive benefits for a family. The kid gets to finish school. The neighborhood doesn't lose a crucial neighbor. The family gets to root down and get to understand the value of a home and avoid homelessness. And for all of us, I think [we] have to recognize that we're paying the cost of eviction because whatever our issue is, whatever keeps us up at night, the lack of affordable housing sits at the root of that issue. ...

Stabilizing a home has all sorts of positive benefits for a family.

We know that neighborhoods that have more evictions have higher violent crime rates the following year. You can understand why — it rips apart the fabric of a community. We pay for that. The top 5 percent of hospital users consume 50 percent of the health care costs. Guess who those people are? They're the homeless and unstably housed. And so I think we can spend smart or we can spend stupid, and so I think addressing the affordable housing crisis is a win for families, for landlords and for the taxpayer.

Roberta Shorrock and Seth Kelley produced and edited the audio of this interview. Bridget Bentz and Molly Seavy-Nesper adapted it for the Web.

In the audio of this story, and in a previous Web version, it is incorrectly implied that there are about 3,000 traffic fatalities per day in the U.S. The National Highway Traffic Safety Administration reports there were 37,461 fatalities caused by car crashes in 2016, or about 103 per day.