Accessibility links
'I Wanted To Punch Him': Cosby Accuser Janice Dickinson Testifies Former model Dickinson is the fourth of five women prosecutors are calling to the stand in an attempt to show that Bill Cosby's alleged assault of Andrea Constand was not an isolated case. 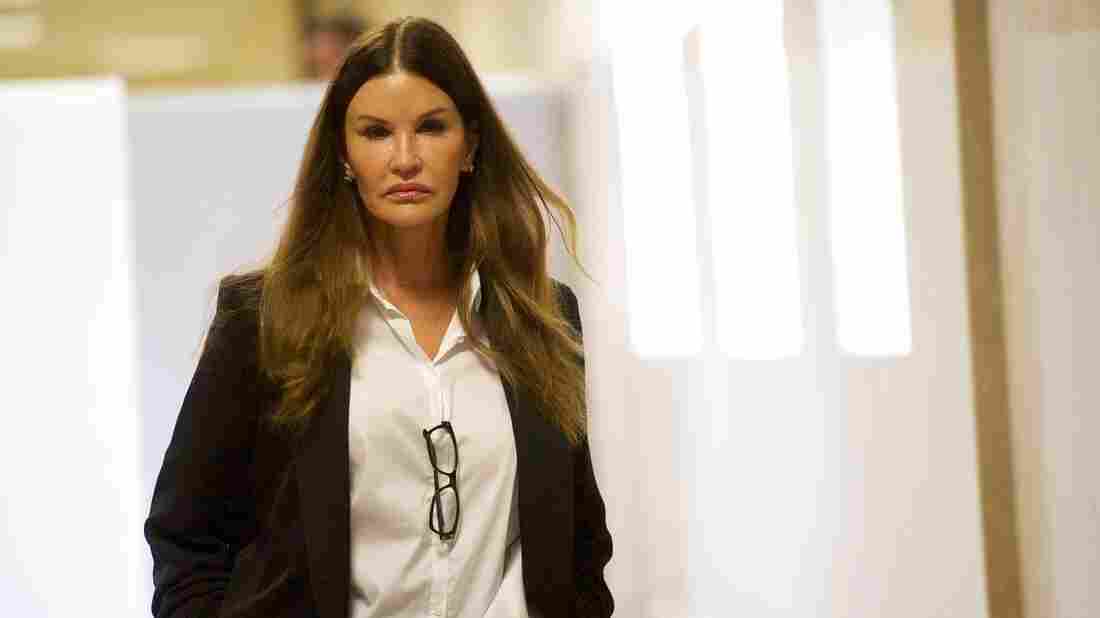 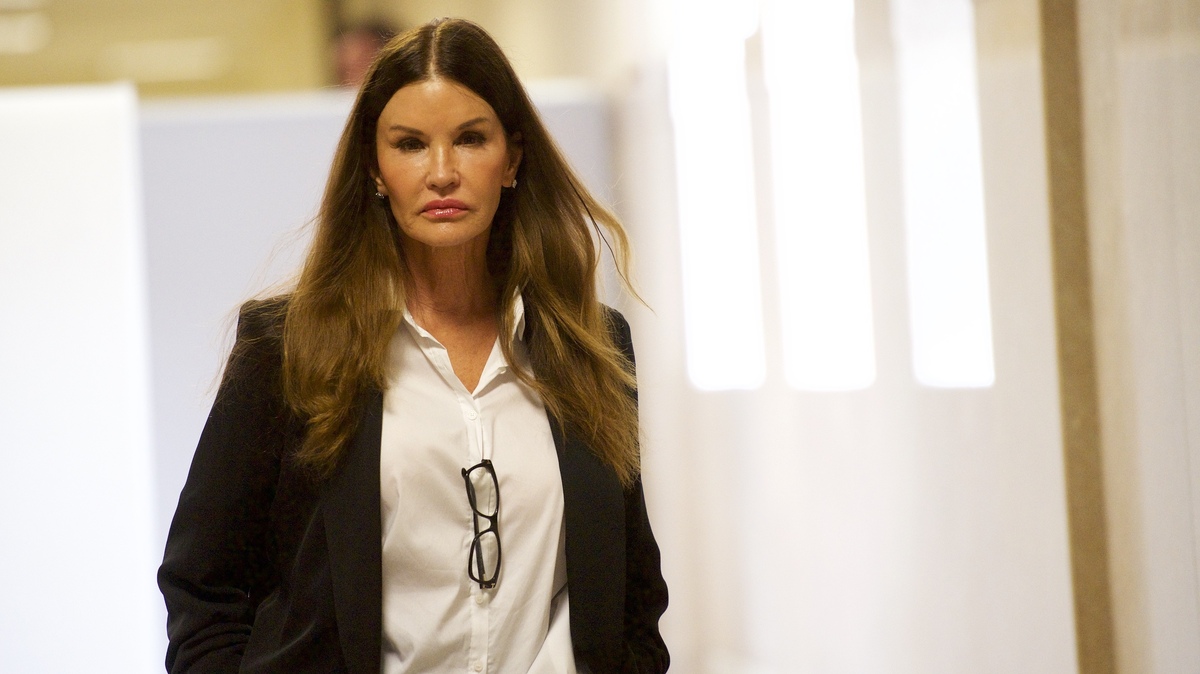 Not long before reality TV star and former model Janice Dickinson says Bill Cosby raped her, back in 1984, she snapped a picture of the iconic entertainer in a hotel in Lake Tahoe.

In the photograph, shown to a jury of seven men and five women on Thursday in Cosby's criminal retrial, a younger, more debonair Cosby is depicted sporting a colorful bathrobe, a brown velvet hat and gold-metal-frame glasses. In the photo, he is talking on a phone in a hotel room.

Dickinson testified that after she snapped it, she began to feel what she thinks now were the effects of a small blue pill Cosby gave her to deal with menstrual pain she was experiencing.

"I was feeling really lightheaded," Dickinson said. "When I spoke, it didn't sound like my words were coming out. I was in my head," she said. "I couldn't get words out I wanted to say."

Wooziness, she said, was overtaking her as she was sitting on the edge of a hotel bed.

"I was rendered motionless," she said.

Dickinson is the fourth of five women prosecutors are calling to the stand in an attempt to show that Cosby's alleged assault of Andrea Constand was not an isolated case. Dickinson, by far the most prominent of the parade of women, is not directly tied to the criminal charges. The judge has allowed her and four others to testify to demonstrate that Cosby over the decades acted with a "common plan or scheme."

Cosby, 80, has pleaded not guilty to three counts of aggravated indecent assault over a 2004 incident involving Andrea Constand, a former employee of the women's basketball team at Temple University, Cosby's alma mater.

Among the more than 50 women who have lodged sexual misconduct allegations against Cosby, Constand has been seen as the only one whose case could be pursued within the legal time limits.

Last year, when a jury deadlocked on Cosby's fate after failing to reach a verdict, a judge allowed one accuser in addition to Constand. For the retrial, the judge permitted five, although the change was never fully explained.

Lead Cosby defense lawyer Tom Mesereau has said the five other accusers are a diversion — an attempt, he suggested, to tap into the #MeToo movement in an attempt to bias the jury.

"This is prosecution by distraction," Mesereau said. "It is a he said, she said, but what I think they're hoping in the current climate, you'll be prejudiced. Maybe you'll be too blinded by accusations."

The accusing witnesses have ranged from grief-stricken to unflappable. While Dickinson was remembering an incident she says happened three decades ago, the 63-year-old did not falter.

She told the jury that after she was immobilized, Cosby mounted her. The smell of cigars and espresso, she remembers, was rank. And more memorable than his scent was the symbol of power and decency he had long embodied to her.

"Here was 'America's Dad' on top of me," she told the jury. "A happily married man of five children, and I remember thinking how wrong it was. How very wrong it was."

"I was disgusted and in shock and humiliated."

The next day, when she confronted him on a lakeside dock, "he looked at me like I was crazy."

His bewildered look infused her with rage, she told the jury.

"Well, I wanted to hit him; I wanted to punch him in the face. I remember feeling anger, disgust, humiliated. Ashamed."

Yet despite this, she buried the account for years, fearing going public would damage her career. "I felt victimized, and that's why I didn't go to the police," she said. "I had clients who would not appreciate the fact that I had been raped."

When it was Mesereau's turn to cross-examine Dickinson, the intensity of the courtroom ratcheted up.

Wielding a copy of Dickinson's 2002 memoir, No Lifeguard on Duty, Mesereau forcefully asked why her retelling of the 1984 incident in the book's pages did not include rape.

Dickinson chalked it up to poetic license, saying the ghostwriter did not include it. Plus, she said, she "was broke and needed money to pay for my children's education."

In other words, Mesereau asked, she lied in her memior to make some money?

Mesereau pushed: "You tell a completely different story in your book," he said. "You say in this book you didn't have sex with him at all."

Without missing a beat, Dickinson said, "I wasn't under oath when I wrote that book."

On the stand, Dickinson went over some unsavory parts of her past, including how a reliance on cocaine sidetracked her modeling career and sent her into rehab in the early 1980s.

Mesereau had series of questions over Dickinson's civil litigation aimed at Cosby, including a pending defamation lawsuit.

It took decades for her to call him out publicly, Dickinson said, saying the guidance she was given as a 20-something was to keep her mouth shut for the sake of professional advancement.

"It would never get past Cosby's legal team," she said, recalling advice she received. "He's a powerful guy. He can ruin your career."

Mesereau presented excerpts from Dickinson's three books in which she describes scenes in the 1970s and '80s where heavy drug use and promiscuous sex were common, including wild party scenes at the New York discotheque Studio 54. From the stand, she told the jury that luminaries including Gore Vidal, Robert De Niro and Margaret Trudeau could be spotted on the dance floor, she testified.

She denies that she partook in the drug-fueled bacchanal as she has described in her book, saying again that she gave her ghostwriter "dramatic liberties."

"Here's the thing," said Dickinson, considered one of the world's first supermodels. "There is no way I could appear drunk and appear on the cover of Vogue all over the world. And to walk in famous designer shows. I did catalog work. I did commercial work," she said. "If they smelled it on my breath, they wouldn't have hired me."

Judge Steven O'Neill told the court that Constand is expected to take the witness stand on Friday.

Cosby's defense team has portrayed Constand as a scheming manipulator who was "in love with his fame and money." Defense attorneys say Constand ginned up a sexual assault claim against Cosby as a way of forcing him to pay a nearly $3.4 million civil settlement.