Accessibility links
Clash For Control Of Consumer Financial Protection Bureau Heads To Court CFPB Acting Director Mick Mulvaney testified before the Senate on the same day another CFPB employee appeared in court to argue that Mulvaney had been unlawfully installed as its chief. 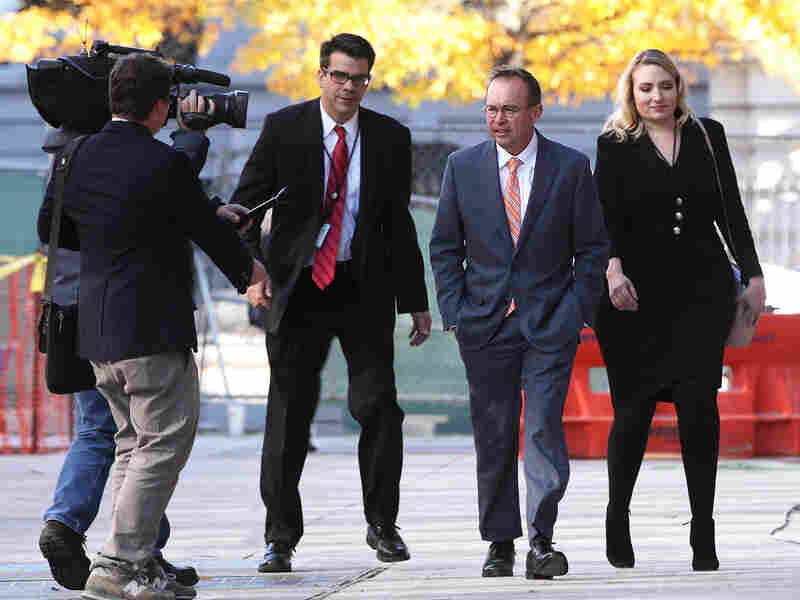 Mick Mulvaney arrives at the Consumer Financial Protection Bureau on Nov. 27, 2017, after being named director by President Trump. Mulvaney's appointment is being challenged in court by Leandra English, who had been appointed to that position by outgoing Director Richard Cordray. Alex Wong/Getty Images hide caption 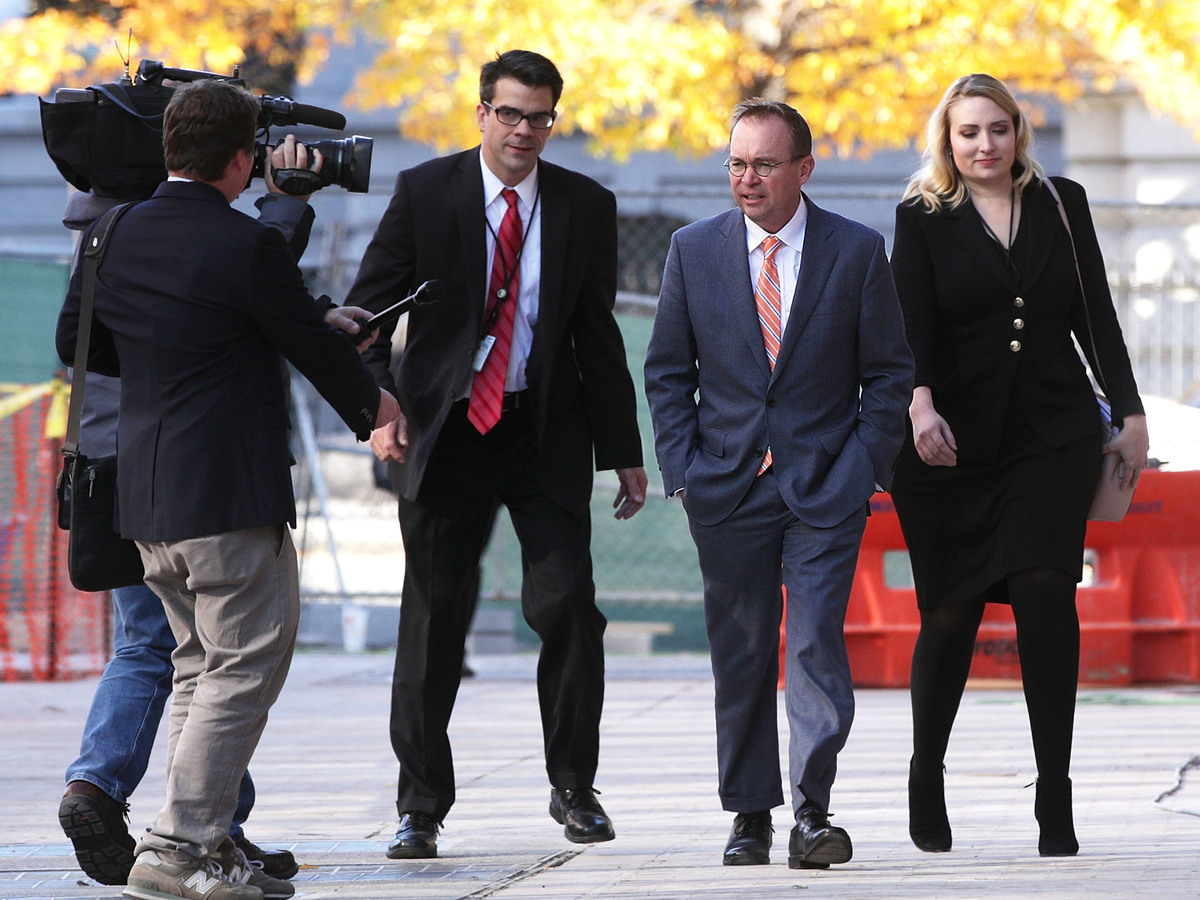 Mick Mulvaney arrives at the Consumer Financial Protection Bureau on Nov. 27, 2017, after being named director by President Trump. Mulvaney's appointment is being challenged in court by Leandra English, who had been appointed to that position by outgoing Director Richard Cordray.

As the current Consumer Financial Protection Bureau head sparred with the agency's champion, Sen. Elizabeth Warren, in a congressional hearing, a legal battle over who gets to run the bureau escalated in a Washington, D.C., courtroom on Thursday.

White House Office of Management and Budget Director Mick Mulvaney is running the consumer bureau and testified Thursday before the Senate. But the deputy director of that same agency, Leandra English, is challenging Mulvaney's right to run the bureau before the U.S. Court of Appeals for the D.C. Circuit.

The case is about who gets to choose the bureau's acting director when its Senate-confirmed director steps down. When former director Richard Cordray resigned on Friday, Nov. 24, 2017, he designated English, his chief of staff, as his successor. English has helped lead the bureau for years and supported many of the enforcement actions Cordray initiated against big banks like Wells Fargo to Discover Bank.

But before English could show up for work the following Monday, President Trump announced that he wanted Mulvaney to lead the agency. When Mulvaney was in Congress, he criticized the consumer agency and voted for bills that aimed to curtail its powers — or get rid of it entirely.

The announcement immediately launched a succession crisis at the agency. Lawyers for both the consumer bureau and the Justice Department issued memos arguing that Mulvaney was the lawful director.

Mulvaney showed up at the CFPB the next Monday with a box of doughnuts and a plan to reshape the regulatory agency. He took control as the top manager and sent emails to staffers instructing them to ignore English's claims to his position as acting director.

English still works at the agency, and aside from his instructions to ignore her communications, Mulvaney has taken no steps to remove her. But English has almost no authority, with Mulvaney making day-to-day decisions and appearing before Congress as the agency's acting director, according to lawyers who argued the case before the appeals court on Thursday.

It's a situation that some say contradicts the very purpose of the CFPB. The financial regulator was Established as a part of the Dodd-Frank Act in the aftermath of the financial crisis and tasked with protecting consumers' interests in dealings with financial products — including mortgages, credit cards and payday loans. The CFPB was structured to be as independent and politically insulated as possible.

"One of the really important things that Congress wanted to accomplish when it created that agency was to ensure that it would be independent," said English's attorney Deepak Gupta, "to ensure that it had only one job: protecting the American consumer." Gupta is himself a former CFPB employee.

The Dodd-Frank Act is clear: if there is a @CFPB Director vacancy, the Deputy Director becomes Acting Director. @realDonaldTrump can’t override that. pic.twitter.com/r949ccaJAb

But lawyers for the Trump administration say Mulvaney's appointment was lawful under a piece of legislation called the Federal Vacancies Reform Act of 1998. That law outlines the process for appointing acting directors of federal agencies, and it was passed in response to the perceived overuse of acting director appointments under President Bill Clinton.

Under that law, the president has the authority to temporarily appoint acting directors until the Senate can confirm a permanent replacement. But the vacancies act does not apply in every situation, and it's not the only way to name a temporary director.

"One of the things to look at is whether the more specific statute — the Dodd-Frank statute — gives enough indication expressly that the vacancies act does not apply," University of California, Berkeley law professor Anne Joseph O'Connell said.

English's attorneys argue that the Dodd-Frank Act overrides the vacancies act, with a specific process for filling director vacancies.

How The Dodd-Frank Act Plays Into The CFPB Succession Debate

How The Dodd-Frank Act Plays Into The CFPB Succession Debate

But attorneys for the Trump administration say the Dodd-Frank Act merely provides an additional option to the president — not the only option. They argue that what Trump did in appointing Mulvaney is also legal.

"Congress has already told us that if there's an agency-specific statute," administration lawyer Hashim Mooppan argued Thursday, "it coexists."

The appeals court will consider the case in coming weeks. The decision could ultimately go the Supreme Court.