Accessibility links
President Trump Pardons 'Scooter' Libby, Former Cheney Chief Of Staff Libby was convicted of perjury and obstruction of justice in 2007 in connection with the leaking of a CIA officer's identity. 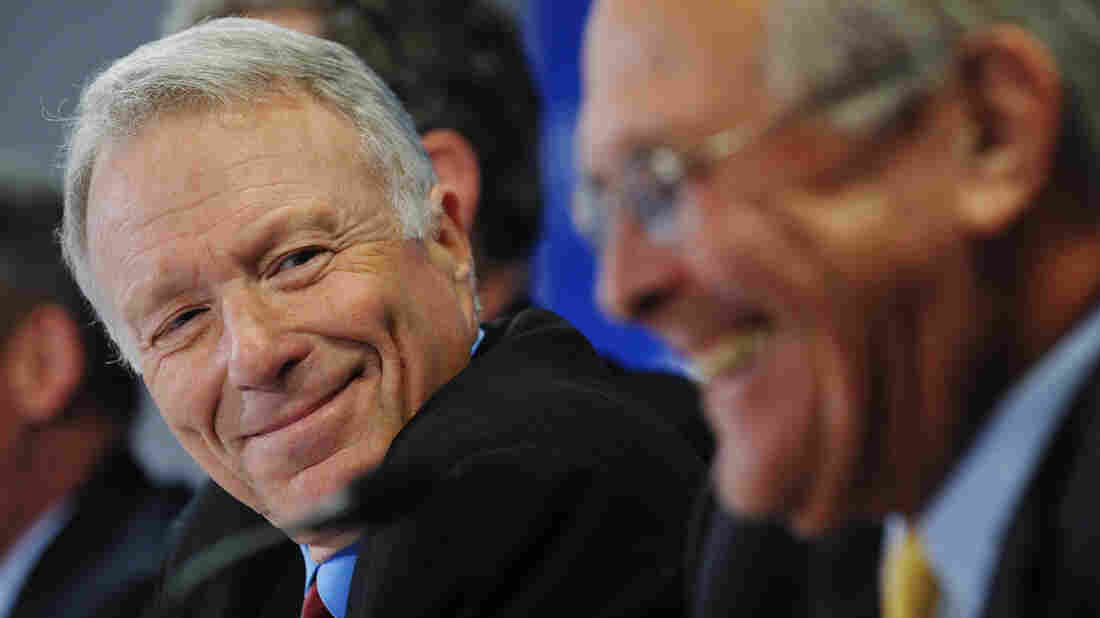 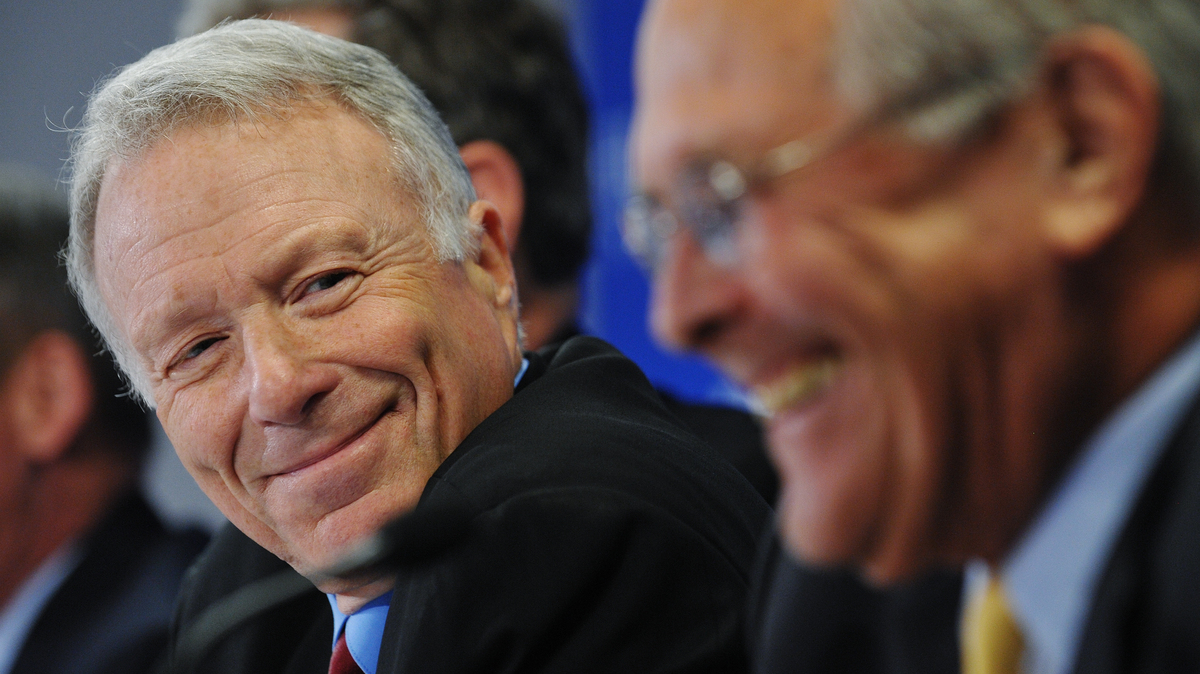 President Trump took the extraordinary step Friday of overruling the judgment of his predecessor, George W. Bush, and granting a pardon to I. Lewis Libby Jr., who served as chief of staff to Vice President Dick Cheney.

Libby, known as "Scooter," was convicted of perjury and obstruction of justice in 2007 in connection with the leak of a CIA officer's identity. Bush had commuted Libby's sentence but did not issue a full pardon.

"I don't know Mr. Libby, but for years, I have heard that he has been treated unfairly," Trump said in a statement from the White House. (Full statement below.) "Hopefully, this full pardon will help rectify a very sad portion of his life.'"

The Libby pardon is only the latest twist in a story of spies, leaks, accusations of hidden motives and abuse of power. In pardoning Libby, Trump, who complains almost daily about leaks, put himself in the peculiar position of pardoning a man convicted of involvement in a national-security leak.

There has been no indication that Trump had a particular interest in Libby's case until recently, when John Bolton, an ally of Cheney's, took over as national security adviser at the White House.

Democrats reacted sharply to Trump's pardoning. House Minority Leader Nancy Pelosi and California Rep. Adam Schiff, ranking member of the House intelligence committee, linked the pardoning to the Russia investigation. Pelosi said the pardon shows Trump is willing to pardon those who lie under oath — and that is a "threat" to the Mueller investigation "and to our democracy."

PELOSI on Libby pardon: "The suggestion that those who lie under oath may be rewarded with pardons poses a threat to the integrity of the Special Counsel investigation, and to our democracy." https://t.co/jSIS2DAxJK

On the day the President wrongly attacks Comey for being a “leaker and liar” he considers pardoning a convicted leaker and liar, Scooter Libby. This is the President’s way of sending a message to those implicated in the Russia investigation: You have my back and I‘ll have yours.

Asked about it at a briefing with reporters, White House press secretary Sarah Sanders disputed the notion that the president pardoned Libby to send a message in the Russia probe.

She called it the "right thing to do" and wouldn't comment further on why he did it because Trump doesn't know Libby.

Conservatives have long championed Libby's cause, but Bush, while commuting Libby's 2 1/2-year sentence, thus saving him from prison, refused to pardon him.

Pressed repeatedly by Cheney at the time of Libby's conviction, Bush asked a team of White House lawyers to examine the case. But when they concluded that the jury had substantial reason to convict, Bush told his vice president that he would not pardon Libby, prompting an angry Cheney to reply, "You are leaving a good man wounded upon the field of battle."

In his own book, Bush said he was taken aback by the harshness of the remark. "In eight years, I had never seen Dick like this, or even close to it. I worried that the friendship we had built was about to be severely tested."

Indeed, according to friends of both men, the relationship never was the same between the two men.

In pardoning Libby, Trump has not done much concrete for Cheney's former chief of staff. Libby was disbarred after his conviction but reinstated in 2016. In some jurisdictions, a convicted felon also loses the right to vote, but in the District of Columbia and Maryland, felons can vote once they have served their time in prison.

A pardon grants forgiveness for a crime, not exoneration, but many see it as removing the stigma of a conviction.

Trump's pardon may send another message — that he is willing to use his pardon power to reward loyalists and to punish prosecutors he sees as running amok.

Spies, spooks and a Comey connection

Libby was prosecuted by Patrick Fitzgerald, a longtime career prosecutor, appointed to investigate the leak of the CIA officer's identity by then-Deputy Attorney General James Comey.

Comey went on to become FBI director and was fired by Trump, a move that led to the appointment of Robert Mueller, another former FBI director whom Trump almost daily accuses of conducting a "witch hunt."

The saga that led up to Libby's conviction began in 2003 when Joseph Wilson, a former diplomat, wrote a New York Times op-ed column, contending that Cheney had deliberately ignored evidence showing that Iraq was not seeking to acquire material needed to build nuclear weapons.

Wilson's claim, undercutting the justification for waging war against Iraq, was based on material he gathered in Niger for the CIA.

To undercut Wilson's claim, administration officials told reporters that he had been sent on the fact-finding mission at the behest of his wife, Valerie Plame, who worked at the CIA.

Publication of that leak blew her cover, a potential federal crime. Libby was not charged with disclosing a CIA officer's identity, however. Nor was the man who actually did blow Plame's cover, former Deputy Secretary of State Richard Armitage. But Armitage readily admitted his involvement to prosecutors and a grand jury.

Libby, however, was convicted on four counts of obstruction of justice, lying to the FBI and lying to the grand jury. He maintained that the differences between his testimony and others was just a matter of a different recollection of events.

In all, eight witnesses, many of them high-ranking members of the Bush administration, contradicted Libby's testimony. And the judge in sentencing him called the evidence "overwhelming."

Bush, in examining the case afterward, was willing to save Libby from going to prison by commuting his sentence, but he was not willing to pardon him.

Plame said in a statement Friday afternoon that "Trump's pardon is not based on the truth," reiterating that Bush reviewed the facts and decided against a pardon.

Fitzgerald, the prosecutor in the case, also said in a statement that Trump's decision to pardon Libby "purports to be premised on the notion that Libby was an innocent man convicted on the basis of inaccurate testimony caused by the prosecution. That is false. There was no impropriety in the preparation of any witness, and we did not tell witnesses what to say or withhold any information that should have been disclosed. Mr. Libby's conviction was based upon the testimony of multiple witnesses, including the grand jury testimony of Mr. Libby himself, as well as numerous documents."

Trump's decision to pardon Libby is one of three pardons he has issued in his nearly 15 months in office. Most notably, he pardoned Joe Arpaio, the former Arizona sheriff whose crackdown on immigrants in the U.S. illegally, resulted in a conviction for criminal contempt.

That was a charge supported by the Trump Justice Department — until the president pardoned him.

Here's the full statement from the White House:

"In 2015, one of the key witnesses against Mr. Libby recanted her testimony, stating publicly that she believes the prosecutor withheld relevant information from her during interviews that would have altered significantly what she said. The next year, the District of Columbia Court of Appeals unanimously reinstated Mr. Libby to the bar, reauthorizing him to practice law. The Court agreed with the District of Columbia Disciplinary Counsel, who stated that Mr. Libby had presented 'credible evidence' in support of his innocence, including evidence that a key prosecution witness had 'changed her recollection of the events in question.'

"In light of these facts, the President believes Mr. Libby is fully worthy of this pardon. 'I don't know Mr. Libby,' said President Trump, 'but for years I have heard that he has been treated unfairly. Hopefully, this full pardon will help rectify a very sad portion of his life.' "