Accessibility links
'Notes From A Public Typewriter' Muse On Everything From Cats To Commencement When Mike and Hilary Gustafson opened the Literati Bookstore in Ann Arbor, Mich., they put an old typewriter on the store floor so patrons could peck out their thoughts — now compiled in a new book. 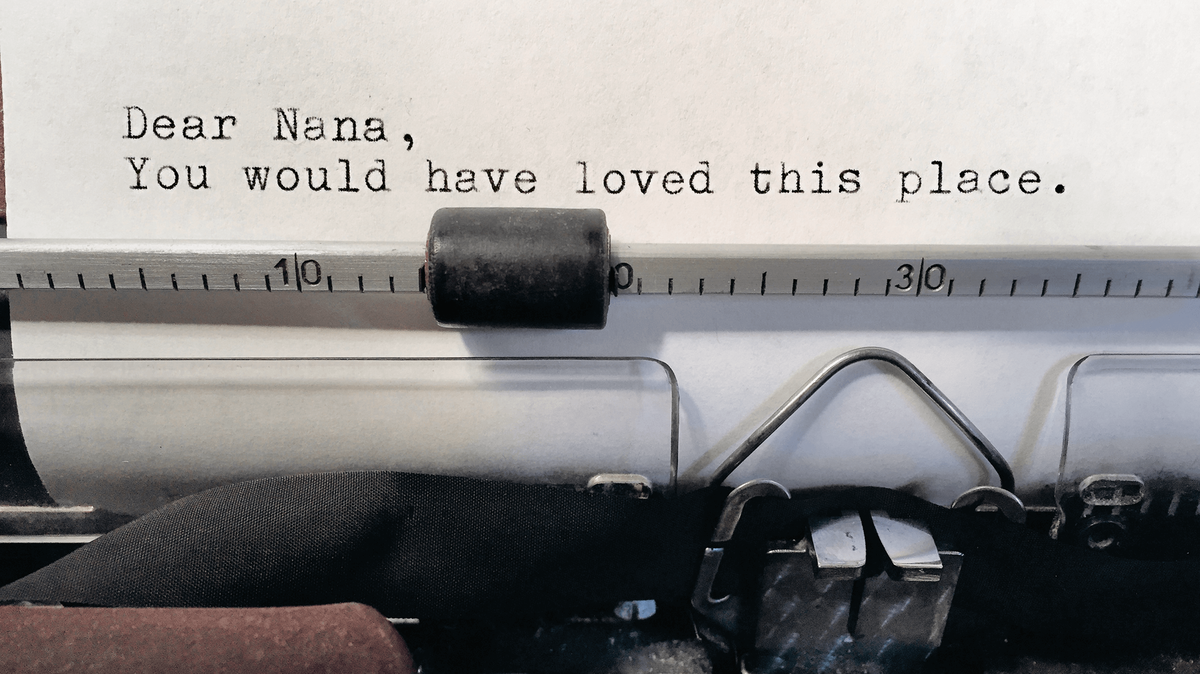 Patrons leave all kinds of messages on the vintage typewriter at Literati bookstore in Ann Arbor, Mich.

When it's closing time at Literati Bookstore in Ann Arbor, Michigan, co-owner Michael Gustafson runs through a checklist that, for the most part, is pretty routine. First, make sure all the customers have gone, lock the doors and take out the garbage and the recycling. Shelve any stray books, adjust the tables, turn off the music. 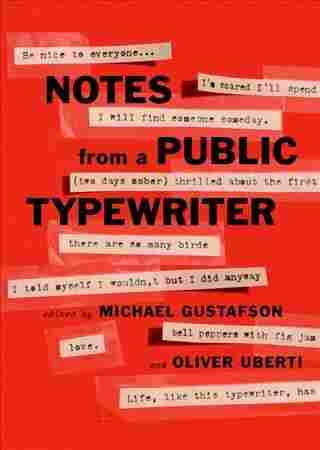 Notes from a Public Typewriter

by Michael Gustafson and Oliver Uberti

Then, after closing out the registers, Gustafson descends one last time to the store's lower level, the part of the bookstore stuffed with volumes on cooking and gardening, travel and history. And he sits down at an old typewriter to read the notes the day's customers have left behind.

On busy days, there are dozens and dozens of them.

"It's sort of detective work," Gustafson tells NPR's Ari Shapiro. "I read every single note because I'm terrified I'm going to miss something. I can't throw away any of these notes. I've got a filing cabinet of just thousands of pages." Literati's public typewriter is an experiment that started in 2013, when Michael Gustafson and his wife Hilary opened the store, and they've received thousands of anonymous messages since.

And now, Michael — with designer Oliver Uberti — has compiled some of his favorite notes into a book, Notes From a Public Typewriter.

It's a wide-ranging collection.

There are notes about childhood:

When we were younger, we would color our skies purple
Our trees blue, and it always looked perfect to us

With every day
School draws nearer.
I don't know whether to be excited
Or nervous
Or totally freaking out
Or sort of okay
Or kinda paranoid.
I guess middle school will be okay,
sort of

You were a good old cat. I'm sorry I pushed you off the couch sometimes when you wanted to sit on my lap and I was touched out from the babies and my eyes were itching. I'm sorry for the time I cut your skin by accident trying to cut out the mats and didn't realize how bad it was at first. I'm sorry I sometimes let your nails get too long or ran out of wet food and that I let you go an extra day without your sub-Q fluids at the end. There were a lot of opportunities to not take perfect care of you as I had intended, but I hope you felt that those were the rare exception in the six years you were with us. I had a great day with you yesterday and hope you enjoyed some of your favorite things on your last day. It will always be a special memory for me. Please know you were loved and I/we will always remember you.

"I remember when we got that note and I took the page out of the typewriter and I showed it to staff and we were all just bawling," Michael says. "All of us were just crying. That was one of the first few notes that we got that struck a chord in me that there was something happening here." 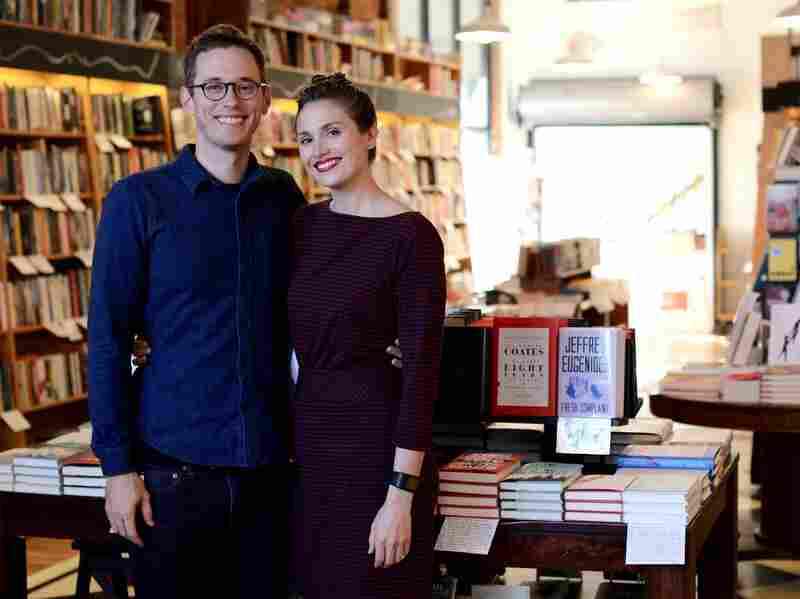 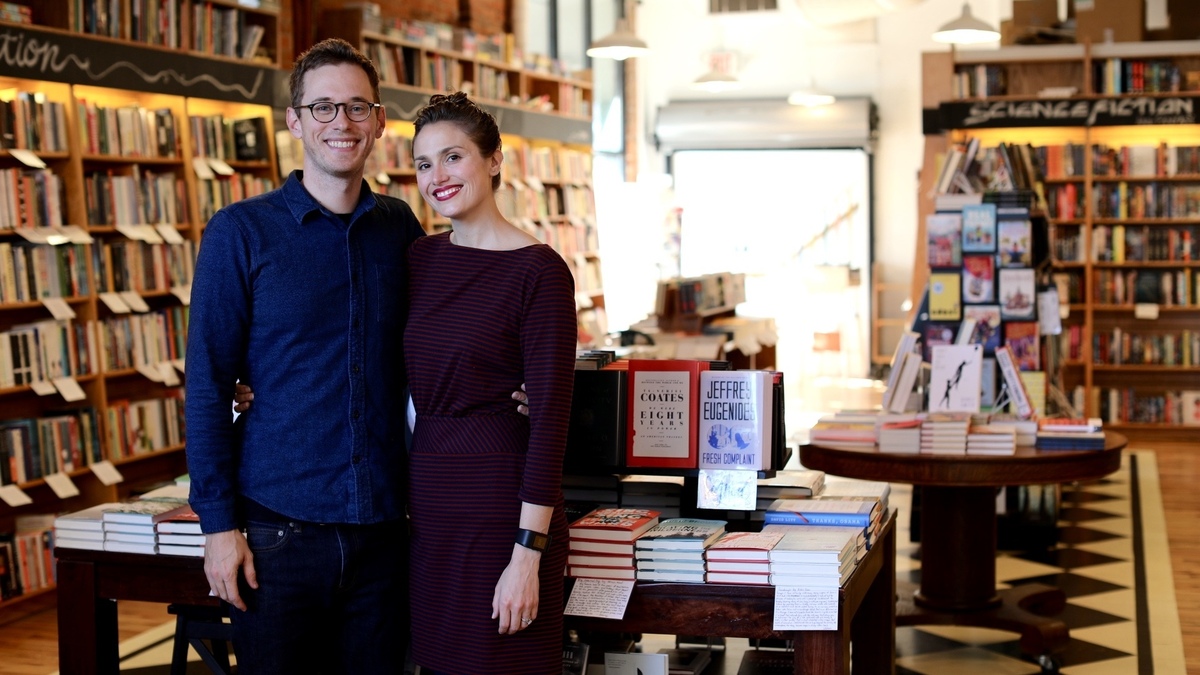 Mike and Hilary Gustafson in their bookstore, Literati.

It's just been a wonderful sort of diary of a town, happening in a bookstore.

The story of the Literati typewriter begins with a 1930s Smith-Corona that Michael inherited from his grandfather. For several years, it resided resided in his Brooklyn apartment — in fact, Hilary remembers the typewriter being there when she first met Michael, and then when they moved in together.

"I was very curious about it," Hilary says. "He used to write his grandmother letters on it — this old, somewhat clunky machine in our tiny Brooklyn apartment." When the couple decided to move back home to Michigan to open a bookstore in Ann Arbor, they decided to base their logo on Grandfather Gustafson's typewriter.

And, on a whim, Michael decided to set one up downstairs — not the precious original, just a regular old typewriter. He envisioned customers stringing out one long story, maybe over decades, with each typist picking up the thread where the last person left off. But instead, something magical — and totally surprising — happened.

The notes started pouring in.

Love letters, poems, quotes, sprawling meditations on life. Notes written over the top of others, single words, perfectly spaced paragraphs. When it's commencement time at the University of Michigan, advice for new graduates fill the pages. When the holiday season approaches, typists leave notes about the family members they wish were still alive to celebrate with. And of course, the occasional fart joke bumps up against a deeply personal confession.

"It's just been a wonderful sort of diary of a town," says Michael, "happening in a bookstore."