Accessibility links
Avengers Prep: What You Need To Know About Infinity Stones Before The New Movie They're the major MacGuffins of the Marvel Cinematic Universe — but there's a lot of them, and you need a scorecard to keep track of which does what. We're here for you. 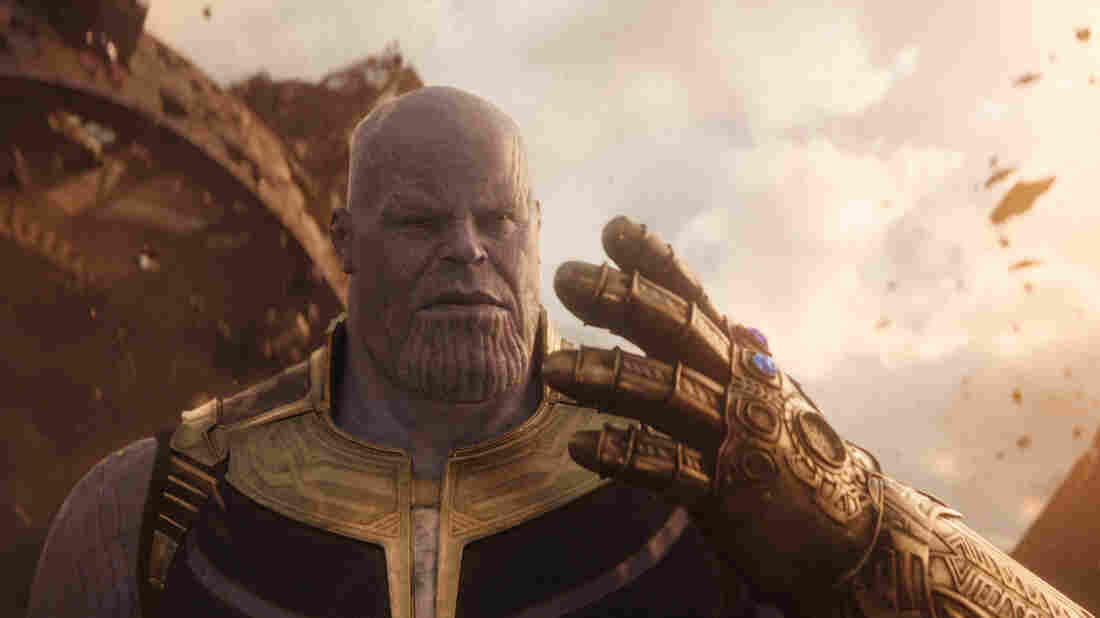 Ya Got The Stones For This? Thanos (Josh Brolin) blithely ignores Coco Chanel's advice on accessorizing — so you know he's evil — in Marvel's Avengers: Infinity War. Marvel Studios hide caption 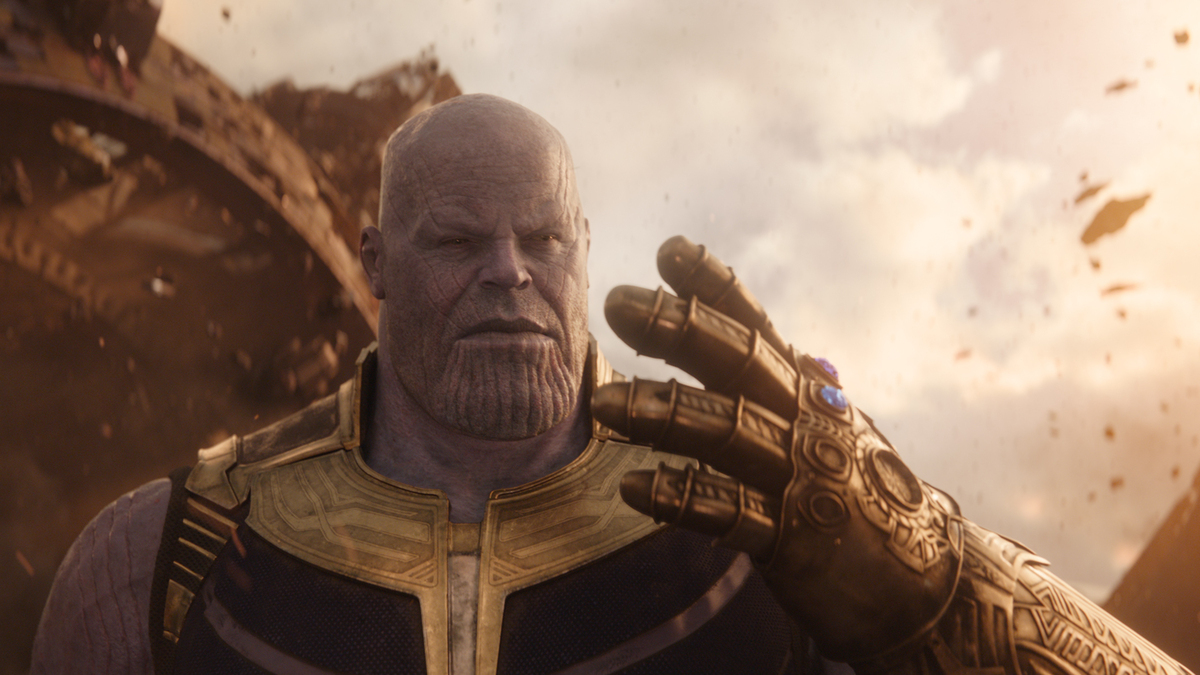 Ya Got The Stones For This? Thanos (Josh Brolin) blithely ignores Coco Chanel's advice on accessorizing — so you know he's evil — in Marvel's Avengers: Infinity War.

Call them the Mighty Marvel Movie MacGuffins. They're the glittery objects that drove the plots of several individual Marvel movies and that collectively shaped the direction the entire Marvel Cinematic Universe has been heading (almost) since its inception.

They are the Infinity Stones — immensely powerful gems that contain and channel elemental forces of the universe. They're what the villains crave and what the heroes protect. They can be used to destroy or create.

They've been seeded throughout the Marvel Cinematic Universe since 2011, and now, with the release of Avengers: Infinity War on April 27, all the logistical heavy lifting of seven years' worth of films — chasing the Stones, finding them, wielding them, handing them off to shady minor characters for safekeeping — comes to a head.

Well. To a hand, anyway.

Thanos' hand, to be specific. Thanos' gauntlet, if you want to get technical.

Thanos is the MCU's biggest Big Bad, first glimpsed in a post-credit scene in 2012's The Avengers. He is a hulking, purplish-reddish-bluish (seems to depend on the movie's color balance) space warlord determined to reduce the population of the universe by half. If he collects all of the Infinity Stones and affixes them to a metal glove-thingy called the Infinity Gauntlet, he will be able to go about his deadly halving business, according to his daughter Gamora (Zoe Saldana) in the trailer, "with a snap of his fingers."

The Spaceman With A Walkman Is Back: 'Guardians Of The Galaxy Vol. 2.'

(Leave aside, for the moment, how difficult it would be to snap one's fingers in a metal gauntlet.)

(I mean it would be less of a snap and more a rasp, right?)

(Or maybe a clang? Like he was striking some terrible Xylophone of Pan-Galactic Death? Or a Wind Chime of Cosmic Annihilation?)

Anyway. That's Thanos pictured at the top of this post. He is played in the movie by Josh Brolin and a superfluity of CGI chin dimples. And that thing he has on his left hand (so literally sinister!) is the Infinity Gauntlet.

As you can see, he is already well on his way to collecting 'em all — not quite at full, "Billie Jean"-era sparkle-glove status, but close.

Let's review where the various Infinity Stones were the last time we saw them — and what they do.

What It Looks Like: When first glimpsed in Captain America: The First Avenger (2011), a glowing blue cube. (The cube is just a housing that allows the glowy blue stone inside to be handled by us lowly humans.)

What It Does: Opens wormholes in space, making possible instantaneous travel between any two points in the universe. Also has undetermined (read: hazily defined) power to develop weaponry.

Transporting is what the eeeevil Red Skull did with it in Captain America: The First Avenger. It was later recovered by S.H.I.E.L.D., which lost it when Loki absconded with it in The Avengers (2012) and used it to open a wormhole above Manhattan through which an alien army attacked Earth.

Where It Is Now: It spent some time in Asgard's armory, but at the end of Thor: Ragnarok (2017), it was stolen by Loki. (At the very end of Thor: Ragnarok, the spaceship Thor and Loki were flying was intercepted by what was very likely Thanos' ship. So if you're taking bets, the Space Stone is likely one of the first Infinity Stones we'll see Thanos add to his collection.)

What It Looks Like: At first, in The Avengers, a scepter housing a glowy blue gem. Nowadays, a yellow gem (long story) embedded in the forehead of Vision.

What It Does: Oh, a lot of stuff. In its Scepter mode, it granted Loki zappy powers and the ability to manipulate minds, and its mere presence made the Avengers more snippy than baseline. In its current mode (as of 2015's Avengers: Age of Ultron, it grants Vision the ability to ... do lots of stuff, including phase through matter, fly, zap others with energy beams and, you know ... live.)

Where It Is Now: Doing time on Vision's forehead. But the trailers suggest this will not be a permanent condition. Look for Vision to get blurry.

What It Looks Like: Not like a stone, for one thing. Instead, it's a thick, red liquid that sends out tendrils that undulate in a cinematically creepy way.

What It Does: Look, it's OK. You didn't see Thor: The Dark World (2013). A lot of people didn't. So you didn't see the Reality Stone (in the form of the Aether) take over the body of Thor's girlfriend, Jane Foster, allowing her to send out shock waves and ... whatnot. As its name suggests, the Reality Stone alters reality, by converting matter to dark matter. Don't bother asking why that's a thing. Doesn't matter. Lots of people didn't see Thor: The Dark World.

Where It Is Now: For safekeeping, it was given to an ancient being who collects lots of stuff. His name, appropriately enough, is the Collector. (He is played by Benicio del Toro in Thor: The Dark World, and his character is the brother of Jeff Goldblum's Grandmaster from Thor: Ragnarok.)

Given that not a lot of people saw Thor: The Dark World, I'd wager we won't get a big protracted scene of Thanos hunting down and claiming the Reality Stone, and Infinity War will simply cut to the (end of the) chase.

What It Looks Like: When we first see it, at the beginning of Guardians of the Galaxy (2014), it's encased in a silver spherical rock-thing. Later, the Orb is split open and the stone inside is grafted onto a bad guy's space-hammer and given the awesomely ridiculous name of Cosmi-Rod. Once the bad guy is defeated through the power of dance, the Stone is returned to another Orb-casing.

What It Does: Grants ... power? Look, I know, the specific abilities of the various stones seem kind of frustratingly all over the place, but this one's legit. It makes its wielder more powerful — better, stronger, more zappy. You know: energy blasts and energy tornadoes and energy waves and energy bars. (No, OK, not that last one.)

Where It Is Now: Benicio del Toro's Collector character nearly added it to his collection, but it sent out a massive energy blast, as is its zappy wont, that destroyed most of his menagerie. It ended up in hands of the Nova Corps — basically the Marvel Universe's resident space-cops, run by Glenn Close in a complicated wig — and there it will stay, until it won't.

AKA: The Eye of Agamotto

What It Looks Like: First (and only) seen in Doctor Strange (2016), it's a glowy green gem housed inside an amulet embossed with an eye.

What It Does: Finally, some specificity! Some truth in advertising! The Time Stone allows its wielder to control time — to speed it up, slow it down, reverse it or create time loops. See, there, Marvel? Simple. Precise. Clean.

Where It Is Now: Hanging around Doctor Stephen Strange's neck, right under his dumb goatee.

What It Looks Like: Again, ? It has yet to turn up in a Marvel movie, at least by that name. It's most likely an orange gem, the largest of them all, which fits on the back of the gauntlet — not, as the others do, on the fingers.

What It Does: In the comics, it grants its owner the ability to do lots of mystical things — trap souls in an artificial existence, see into a person's soul, etc. It's not known how closely the film will adhere to this.

But given the fact that so much of the Infinity War trailer is set in and around Wakanda — and the fact that the "heart-shaped flower" seen in Black Panther grants the ability to commune with the dead — many have speculated that the Soul Stone will turn out to have something to do with vibranium.

Where It Is Now: Your guess is as good as any. Unless you guess, "in Wakanda," in which case it's slightly better than most, probably.

What It Does: Wears the Gap to the Oscars, famously. And nowadays? Rocks the hell out of a Disaster Artist cameo and gives a great interview in a sweater to which attention must be paid.

Where It Is Now: Not getting the work it deserves, HOLLYWOOD.

What It Does: Effortlessly fuse rock, soul, funk and psychedelia into chart-topping, socially conscious pop anthems.

Where It Is Now: On the set list of every wedding DJ at or slightly after 10:30 p.m.

AKA: "That place your Aunt Janice likes? With the slab? What's it called?"

What It Looks Like: An ice cream store, duh.

What It Does: Grants its wielder one unusually muscular forearm.