Accessibility links
Democrats Call For National Park Service Investigation After Climate Report Deletions Public records show a 2016 report on climate change and sea level rise by a University of Colorado researcher has been heavily edited to remove all references to human-induced climate change. 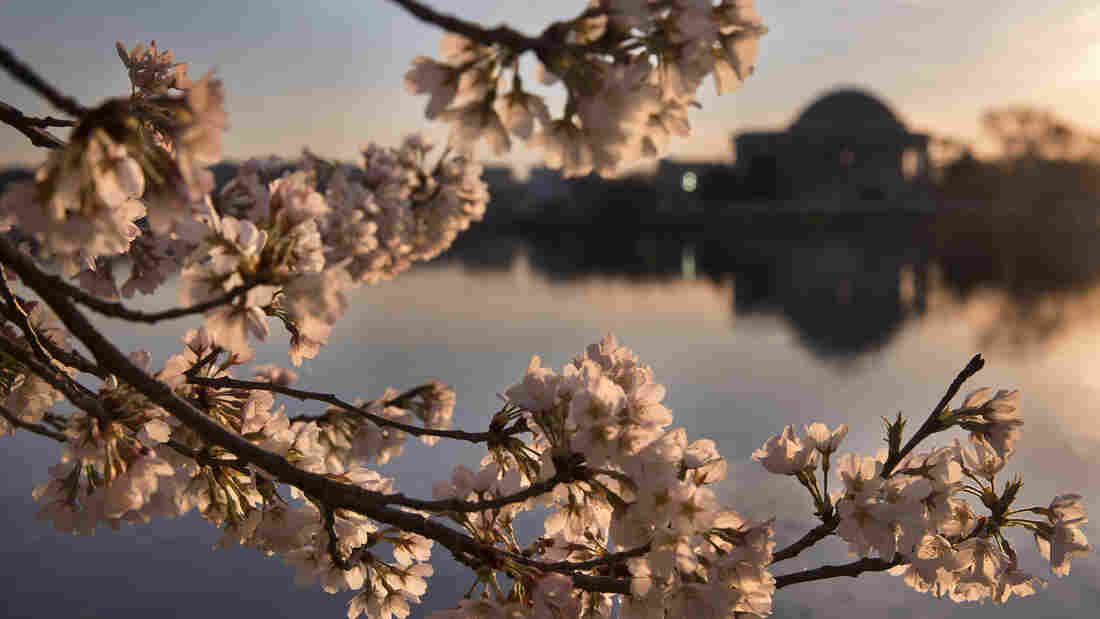 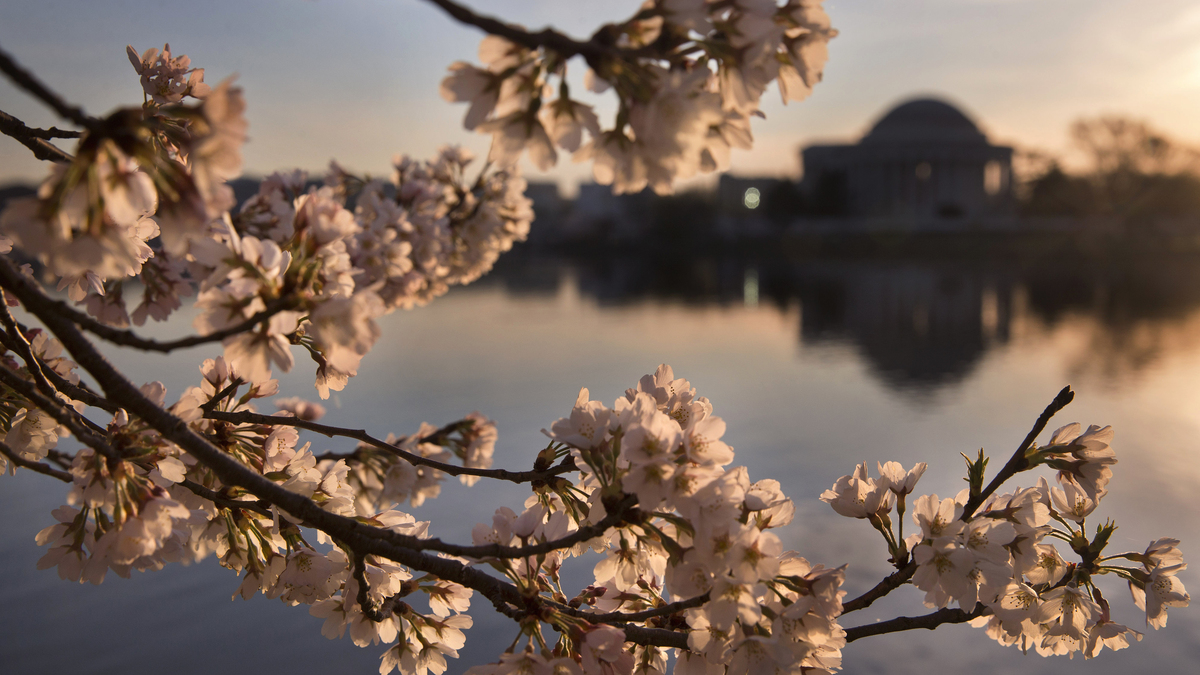 The tidal basin looking toward the Jefferson Memorial in Washington, D.C. Maria Caffrey's report details how a combination of intensifying storms and rising seas might impact 118 National Park Service sites — like the National Mall.

Democrats on Capitol Hill are calling for an investigation into the National Park Service, pointing to a report they say follows a "pattern" of censoring scientists who study climate change. The scientist who wrote the latest report is now worried about her future.

When I arrived at Maria Caffrey's house in Denver, her husband was about to take their 3-month-old baby out for a stroll. Her real baby is named Katherine, but Caffrey's professional baby is her 86-page report on the National Park Service. It's about what sea level rise and storms could do to coastal parks in the coming decades, and she's been toiling over it for the better part of six years.

Caffrey is originally from London, so why would she care about U.S. parks?

"I'm an American citizen. I've got an American family. And so, protecting the national parks is very important to me," she says. "They're part of our heritage." 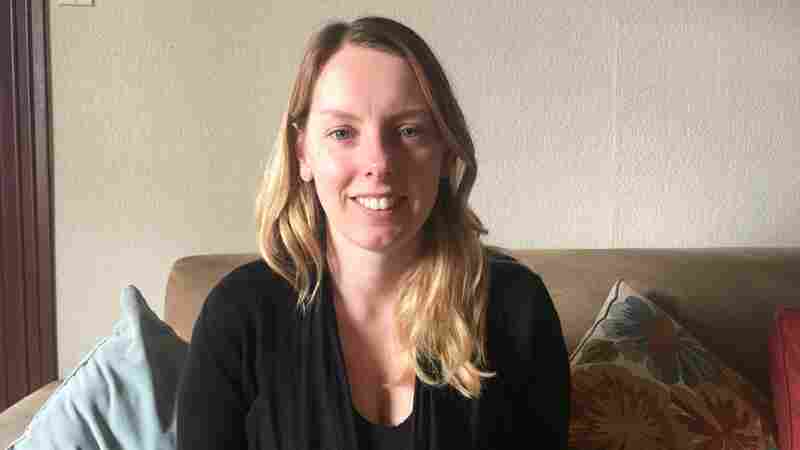 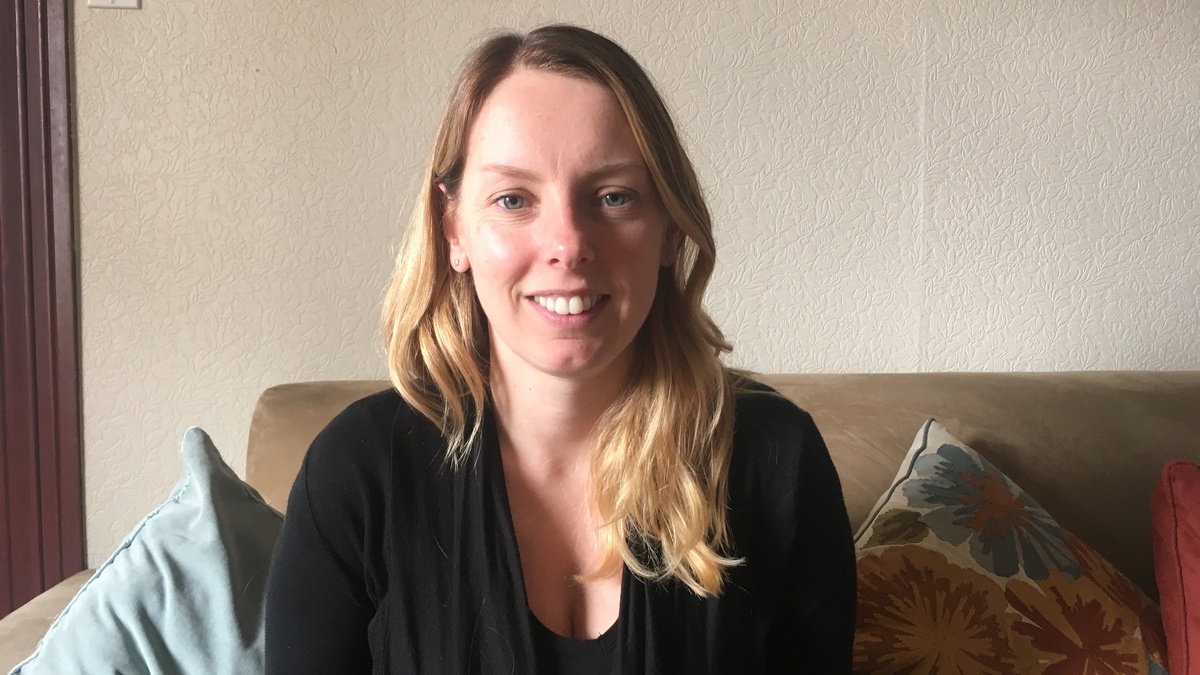 Climate scientist Maria Caffrey at her home in Denver.

Caffrey is a climate scientist with the University of Colorado, but for the past decade she's worked with the National Park Service as a contractor doing everything from advising them on climate change hazards for coastal parks to designing roadside signs about climate change for tourists to read.

During that time, she noticed the agency was using limited, scattered studies to plan for things like flooding.

"There are so many parks that were relying on regional reports or reports that were out of date. There were folks who don't have any training in climate change and so they are naturally just finding whatever they can off the internet to rely on, and those reports will all have different methods going into them," she says. "So, I found it was really, really important that we use one consistent method across the board."

Caffrey dedicated a few years to figuring out how the combination of intensifying storms and rising seas might impact 118 National Park Service sites — places like the National Mall in Washington, D.C., which would not fare well against storm surge from a category 3 hurricane buoyed by rising seas.

"It would create flooding across a massive area," she says.

Caffrey's report acknowledges that some change is natural, like El Ninos.

"There's always going to be a mixture of things. But what we're modeling for is that human component," she says.

She came up with four outcomes for each site, each one determined by how much carbon dioxide people emit into the air. There's the worst-case scenario if we continue with business as usual. There are two in-between scenarios. And then there's the best-case, if we step up and reduce emissions.

"Potentially it's hopeful. We could choose to try and go down that lower emissions path and be able to divert ourselves away from much higher sea levels," she says.

Compiling this report was a long slog, but finally — right before the 2016 presidential election — she turned in the final draft. The National Park Service has been sitting on it ever since.

Elizabeth Shogren, a journalist with Reveal from The Center for Investigative Reporting, heard about the delay and requested public records on the study. They show it had been edited in a very specific way.

"They wanted to take out this," says Caffrey, pointing to a computer screen marked up with edits that systematically delete mentions that climate change is caused by humans.

Words like "anthropogenic," the scientist way of saying "human-caused," have been crossed out.

What meaning is lost or changed by such small edits?

"I'm not sure I'm prepared to go into that today," says Caffrey. She's hesitant to say more because she's still working closely with the National Park Service, which funded her research, and with whom she's worked for years.

But Romany Webb, a climate law fellow at Columbia Law School, will talk.

"Definitely this is just one example of a broader trend within the Trump administration to silence science that it disagrees with," says Webb, who runs a site at Columbia Law called the Silencing Science Tracker. The site is a joint project with Climate Science Legal Defense Fund that tracks government attempts to restrict or prevent scientific research. So far, they have more than 120 entries and, Webb says, that's rising almost every day.

Webb says the growing list paints a worrying picture of how the current administration is silencing science, even if on the surface it might seem like small edits, such as removing words like "anthropogenic."

"But they're really important words," says Webb. "And if we remove them it really obscures that message and impairs public understanding about what's causing climate change and what we can do to fix it."

The National Park Service responded to our request for an interview with a brief email saying it's a draft report under review and they'll provide more information when it's final.

Meanwhile, Secretary of the Interior Ryan Zinke recently answered questions from lawmakers about the controversy. Zinke said he "never change(s) even a comma in scientific things," and he's never seen the report.

"I want an investigation into how that document got around to the press before we even had a chance to look at it," Zinke said.

Caffrey says there's a reason the press has the document.

"I was legally required to release these records," she says.

That's because she works for a public university, where all information must be available on request. So, when reporters came calling, Caffrey and the university had to comply.

It's unclear what will happen now with Caffrey's report on sea level rise. There's confusion about who it even belongs to: the National Park Service or Caffrey?

"I worry every day this baby is forgetting me. I'm just gone," she says.

"She can snorkel around the lighthouses and think of mommy warning people about how rapidly the sea levels are rising. Or when the next big storm strikes a major city, she can think of mommy and how she warned people," says Caffrey.

Or at least, how she and others tried.

"I really am trying very hard," she says. But she's worried — about the controversy around her report and how it could affect her future as scientist.

This story comes to us from the Mountain West News Bureau.