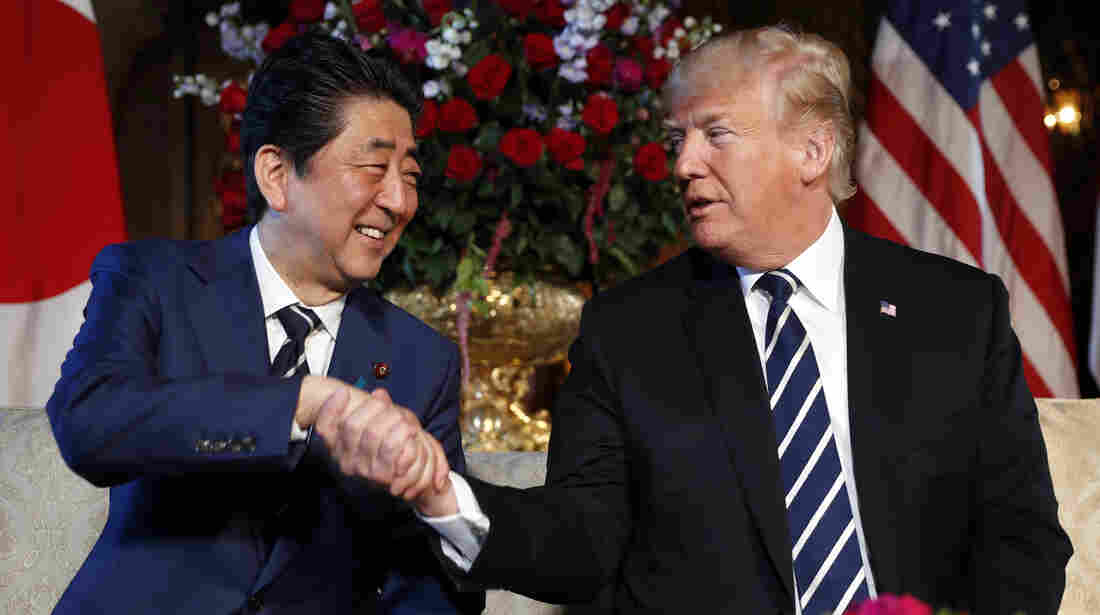 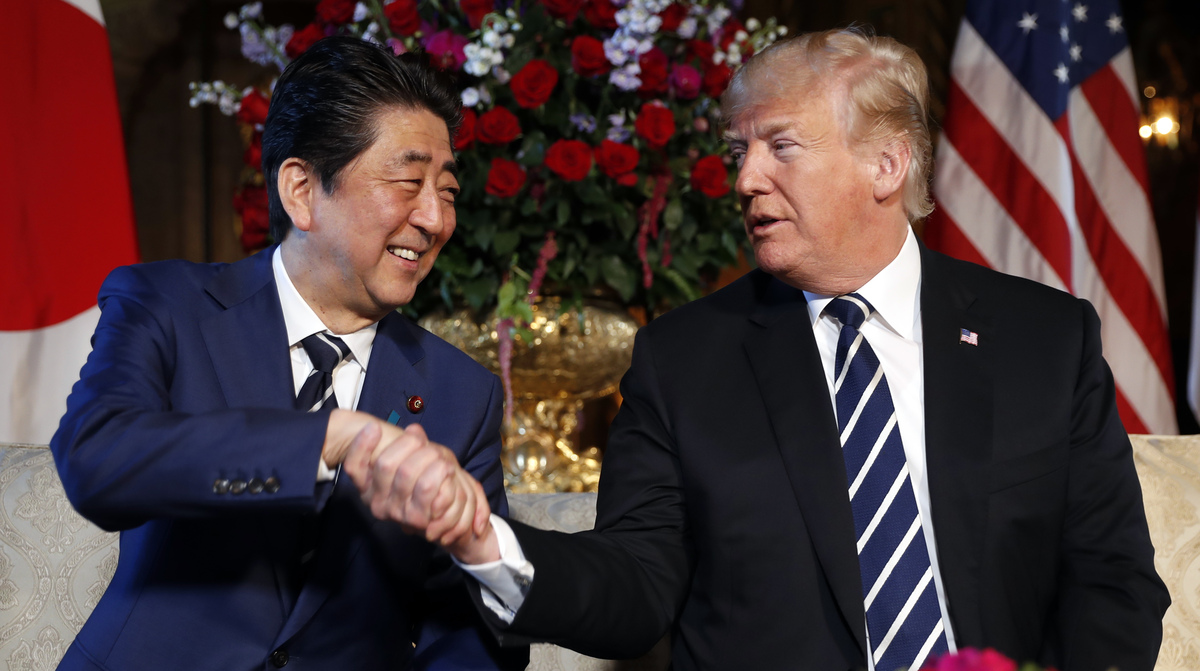 President Trump opens two days of talks with Japanese Prime Minister Shinzo Abe on Tuesday at his South Florida resort, under sunny blue skies that offer no hint of the clouds forming on the U.S.-Japan relationship.

The first thunderclap came last month, when Trump unexpectedly accepted an invitation to meet with North Korean leader Kim Jong Un. Nuclear diplomacy is expected to be a dominant focus of this week's meeting between Trump and Abe.

On Tuesday, Trump said the U.S. has already entered into direct talks with North Korea at "extremely high levels." He said there appears to be a lot of good will but cautioned, "ultimately it's the end result that counts."

The threat posed by North Korea's nuclear program was underscored the last time Trump and Abe met at Mar-a-Lago, in February 2017. The two leaders were having dinner at the president's club when news arrived that North Korea had fired a test missile into the Sea of Japan.

Although Trump has advocated a policy of maximum pressure against North Korea, Abe worries that in his meeting with Kim, Trump might accept something less than a complete dismantling of Pyongyang's nuclear program.

"I'd like to underscore the importance of achieving the complete, verifiable and irreversible denuclearization," Abe said through an interpreter, "as well as the abandonment of missile programs of North Korea."

"President Trump has a team of people working for him now who have extensive experience dealing with the North Korean nuclear menace," said Matt Pottinger, the National Security Council's senior director for Asian affairs.

"The president has a great degree of respect for Prime Minister Abe's views on security in the region and on the peninsula," Pottinger added, stressing that Trump would listen carefully to Abe's concerns.

Trump said that the summit with Kim will only take place if North Korea cooperates.

"It's possible things won't go well and we won't have the meeting," Trump said. "But we will see what happens."

Trump also welcomed upcoming talks between North and South Korea, raising the prospect those talks might produce an actual peace treaty to replace the decades-old cease-fire.

"People don't realize the Korean War has not ended. It's going on right now," Trump said. "And they are discussing an end to the war. So subject to a deal, they would certainly have my blessing and they do have my blessing to discuss that."

Trade is also on the agenda for Trump and Abe. Japan is feeling the pinch of a new 25 percent tariff the Trump administration has imposed on steel imports. While other U.S. allies such as Canada and South Korea won a reprieve from those tariffs, Japan has not.

Beijing Forges Ahead With 'Made In China' Policy, Targeted By Proposed U.S. Tariffs

Trump has used the cudgel of steel tariffs to win concessions from other trading partners, and that may be his goal with Japan. The U.S. had a trade deficit with Japan last year of $56 billion. Last week, Trump tweeted that he's working toward a trade deal with the country, "who has hit us hard on trade for years." Japan, however, has shown little interest in bilateral trade talks with the U.S.

Abe spent considerable political capital pushing Japan to join the Trans-Pacific Partnership, a 12-nation trade pact advanced by the Obama administration, only to have Trump pull the U.S. out of the deal in one of his first acts as president.

The TPP Is Dead. Long Live The Trans-Pacific Trade Deal

Japan and the other TPP nations have forged ahead with the agreement without the U.S. Then, in another turnaround last week, Trump told farm-state lawmakers he would consider rejoining TPP — a move that caught trading partners and even members of his own administration by surprise.

It's not clear that anything will come from that. Trump tweeted that he would only rejoin TPP if he could do so on much better terms — which the other countries are unlikely to grant.

"For the American side at the moment, it's more of a thought than a policy, that's for sure," said Larry Kudlow, the new director of Trump's National Economic Council.

Despite Trump's unpredictability, Abe has worked hard to cultivate the American president. He's met more often with Trump than any other foreign leader has. Their first encounter came just over a week after the 2016 election, when Abe made a pilgrimage to Trump Tower to confer with the new president-elect.

As an introductory gift, Abe presented Trump with a $3,755 golf driver. Abe's father, who also served as prime minister, once golfed with President Eisenhower. Trump and Abe have continued the tradition in both Japan and Florida.

Although aides initially said there would be no golf during this visit, Trump said he and Abe will "sneak out" for a round on Wednesday.

The president and first lady will also host Abe and his wife for a pair of dinners, Tuesday and Wednesday.