Accessibility links
Pulitzer-Winning Photographer Made Charlottesville Photo On His Last Day On The Job Photographer Ryan Kelly, was just finishing four years at The Daily Progress when he captured the image of a car plowing into a crowd of counterprotesters in Charlottesville, Va.

Listen · 3:29 3:29
Pulitzer-Winning Photographer Made Charlottesville Photo On His Last Day On The Job 3:29 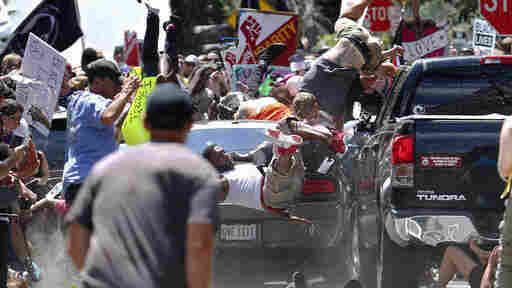 People fly into the air as a vehicle drives into a group of protesters demonstrating against white nationalists in Charlottesville, Va. on Aug. 12, 2017. Kelly won a Pulitzer Prize for the image. Ryan M. Kelly/The Daily Progress via AP hide caption

Last summer, on August 12, photographer Ryan Kelly arrived at a far-right rally in Charlottesville, Va., to take pictures for the city's newspaper, The Daily Progress.

It was his last day on the job — and it was a memorable one. A photo he took of a car plowing through a crowd of counterprotesters became the defining image of the chaos that day.

On Monday, Kelly was awarded a Pulitzer Prize for breaking news photography for the photo he took.

The photo shows a car careening into a massive crowd, with bodies flying through the air.

"You see sunglasses and shoes and cellphones that aren't connected to people's hands or feet or heads. You see water spraying. There's just a lot of violent, violent details that are coming through in ways that you don't normally experience in everyday life," Kelly says.

The scene shown in Kelly's photo is the same incident in which 32-year-old Charlottesville resident Heather Heyer was killed, and in which 19 others were hospitalized.

"I'm honestly shocked that more people weren't affected by that," Kelly says. "It was such a violent collision. He was traveling so fast down the road when he collided with the crowd. It's amazing to me that more people didn't die, but I'm very thankful for that."

Kelly says his role as a photojournalist is to bear witness to the events around him, but that prior to the far-right rally, he hadn't "covered anything remotely as dramatic or intense" in his four years at the newspaper.

"There's not normally that sort of emotional wrestling that I have to do with an assignment, so this was something new and something more intense than I was used to dealing with," Kelly says. "But that's part of the job. That's news and this was absolutely news."

In Kelly's case, the news of the Charlottesville rally became a global story.

"I'm just happy I could have done my job in that moment despite the fact that I wish it had never happened to begin with," he says.

Kelly left journalism and now works for a brewery managing its social media. On his career shift, he says, "I love journalism. I believe passionately in its importance ... but I was just burnt out after four years and I needed a change."

Noah Caldwell and Emily Kopp edited and produced the audio for this story. Wynne Davis adapted it for the Web.