Accessibility links
'How To Write,' Yes — But Alexander Chee's Latest Is More Mesmerizing Memoir Chee does include some writing tips in his new How To Write An Autobiographical Novel -- but this collection is less a writing lesson than a deeply considered and beautifully written memoir. 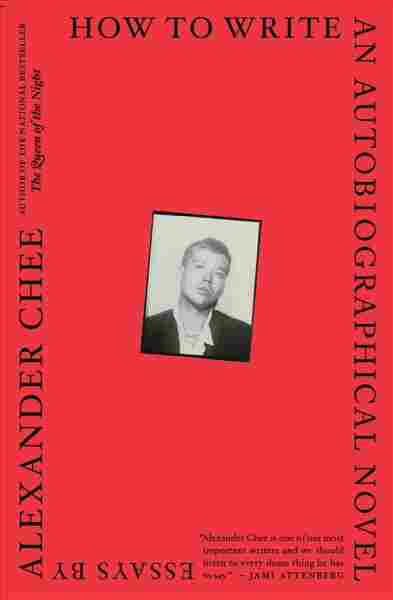 How to Write an Autobiographical Novel

Two-thirds of the way through Alexander Chee's How to Write an Autobiographical Novel, I abandoned my sharpened reviewer's pencil in favor of luxuriating in the words. Chee's writing has a mesmerizing quality; his sentences are rife with profound truths without lapsing into the didactic.

How to Write an Autobiographical Novel purports to provide wisdom on the writing life, and in fact Chee has two chapters of writing tips, arranged in lists that will amuse and possibly thrill fledgling and not-so fledgling writers. In totality, however, this collection is not so much a lesson on writing as a deeply considered memoir.

Chee is half European American and half Korean American. Having grown up in Maine and been bullied for his mixed heritage, Chee recounts his struggle to come to terms with his ethnic identity and his painful teenage years, during which his father died of complications from a car accident. He interrogates his childhood history of sexual abuse, embraces his homosexuality, becomes an activist during the terrifying and tragic early years of the AIDS epidemic, and figures out how to thrive as both a writer and a man.

Chee addressed many of these themes with grace and insight in his debut novel, Edinburgh. In his new book, he circles back from his last book, the epic Queen of the Night, to further mine his inner core with a refreshing candor that poses answerless questions and owns misjudgment and uncertainty. Anticipating his mother's reaction to learning — from his first novel — that he'd been sexually abused, he writes:

The child in me had wanted her to figure out what had happened ... That adolescent wish that the mother knows your pain without your having to describe it. But children have to learn to say they are in pain. To name it. The naming helps heal it.

Of the first time he puts on make-up and cross-dresses for an ACT UP event in San Francisco:

I feel more at home than I ever have, not in San Francisco, not on earth, but in myself. I am on the other side of something and I don't know what it is. I wait to find out.

This waiting, signifying openness to new experience, transmits a message to explore and relish the unexpected. Chee shares his fascination with tarot cards in a chapter called "The Querent" (the person who's asking the cards a question). He realizes that "the mirror I wanted, back when I wished to see around corners into the future, was never possible. The only mirror to be found in the cards was something that could show me the possibilities of the present, not the certainties of the future."

To his friends' horror, he earns money serving guests at Mr. and Mrs. William F. Buckley's parties. One night he sees Buckley, who was vicious in his homophobic attacks, swimming naked with a young male staffer. Eventually Chee reads Buckley's famous column "contending that people with AIDS should be tattooed as a matter of public safety."

I was surprised to see he wanted not one tattoo but two, one on the forearm and one on the buttocks. I wondered if he knew ... that this column would be mentioned in his obituary ... that it would, in fact, tattoo him. And I couldn't help but imagine him in that pool with the young male staffer, swimming underwater, the walls glowing with light, their naked bodies incandescent, just like at Yale — maybe — wishing there was some mark on the boy he could easily see.

Chee is a very special artist; his writing is lyrical and accessible, whimsical and sad, often all at the same time.

Loss threads through How to Write an Autobiographical Novel as if it were part of Chee's bloodstream. In a brief twenty pages, "After Peter" encapsulates the agony of the AIDS epidemic. "I am a minor character in Peter's story," Chee begins. Even if true, the reverse is not. "Why am I telling this story?" Chee asks. Perhaps because the "men I wanted to follow into the future are dead." Perhaps because Chee's desire for Peter "was like a private horizon line." Chee notes that Peter's grandmother knew he was dying before Peter said anything about it: "'He was a very special young man,' she says of him now. 'It seems to me this happens to special young men.'"

Chee is a very special artist; his writing is lyrical and accessible, whimsical and sad, often all at the same time. No doubt he is an inspiring writing teacher as well. His views on writing reflect his own, thoughtfully examined life: