Accessibility links
Superman Reaches A Publishing Milestone, In Classic Costume This week, Action Comics becomes the first American comic book to reach #1000, though that numbering comes with an asterisk. More important: the return of Superman's red trunks — and yellow belt. 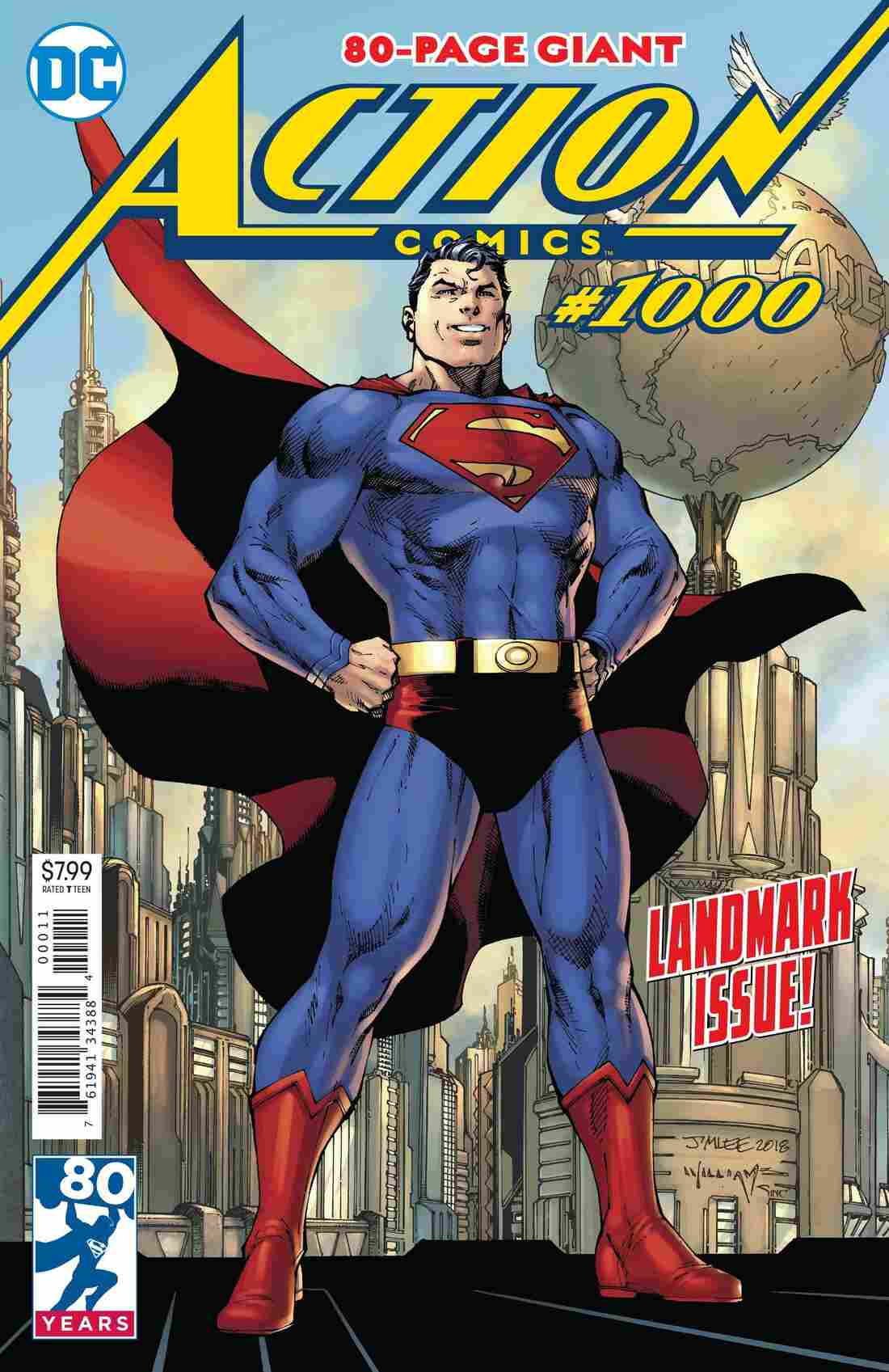 It's not about the numbering.

You'll be hearing a lot this week about the publishing milestone DC Comics' Action Comics has achieved, with the publication of issue #1000, on shelves (physical and digital) today. And I don't mean to dismiss that achievement, believe me. It's 2018, and periodical publishing is a lot like the Man of Steel in the penultimate panel of 1992's "Death of Superman" storyline: Beaten to a bloody pulp and hovering at death's door.

(This metaphor has been arrested before it devolves into theorizing about which developments in the marketplace could prove the allegorical equivalent of that storyline's life-saving Kryptonian regeneration matrix. I'm also sparing you my whole thing about how comics publishing just needs to transform itself, figuratively speaking, into a cyborg, a clone, an alien and an armored dude with a techno-sledgehammer, because this is only paragraph three and I don't want to lose the Normals yet. Buy me a beer sometime, if you're curious.)

The arithmetically inclined among you may have already divined the reason we need to slap a healthy asterisk or two — and maybe a spoonful of salt, while we're at it — on that 1000 numbering. If Superman's been around for 80 years, then the monthly comic in which he debuted, if it's been continually published, should only be arriving at issue #960 or so. What gives?

The Short answer: Comics, is what gives. And takes, and takes and takes.

Action Comics debuted on April 18, 1938 (it was cover-dated June) and was, like other comics on the stands, an anthology. Unlike those others, however, it wasn't a collection of reprinted strips from the funny pages, but a boisterous slumgullion of eleven new characters and features. There was a one-pager called "Stardust" that dished Hollywood gossip, a history lesson on Marco Polo and a bunch of yarns about square-jawed men with even squarer-jawed names like Scoop Scanlon, Pep Morgan and Sticky-Mitts Stimson.

Truth, Jawlines And The American Way: The Changing Face Of Superman

Man Of Tomorrow: Superman, Orson Scott Card And Me

But its lead story was easily the oddest of the lot, and the most visually striking. It featured a beefy guy in a garish circus-strongman outfit jumping around a lot, pummeling a wife-beater into submission, bringing a murderess to justice (literally — he tied her up and carried her over his shoulders) and hefting a car over his head to save a certain girl-reporter from some "dese-and-dose" gangsters.

It took a while for the publisher to realize that Superman was the book's main draw, however. It wasn't until issue #19 that he was made a permanent fixture on the cover. Action remained an anthology for years, though Superman content expanded as the number of backup features steadily winnowed. By Action #262, (March 1960), each month's issue featured only two stories. Remarkably, it wasn't until issue #500 (October 1979) that Superman finally took over each issue for good.

Or at least, for a while. Fourteen years later, after Action Comics #583 (September, 1986), DC rebooted their superhero universe, and Superman along with it. When Action resumed publication four months later, it kept the old numbering but transformed itself into a title which saw the Man of Steel teaming up with other heroes.

And here's where things (start to) get weird.

With Issue #601 (May 1988), Action Comics became Action Comics Weekly, a 48-page anthology series in which Superman merited only a regular two-page appearance. But just over one year later, with Action Comics #643 (July 1989), the experiment was over, and Superman took over the book once again, which returned to a monthly schedule.

Things remained relatively stable — for superhero comics, anyway — until 2011, when DC Comics decided on another wholesale reboot of its universe called "The New 52." This time, however, they wiped the slate clean both within and without the comics — all their titles got restarted and renumbered. Action Comics #904 was cover-dated October 2011, and the next issue, dated November 2011, was Action Comics #1 (Volume 2).

This "New 52" initiative lasted, tidily enough, for 52 issues, until, in still yet another metafictional mulligan, the pre-52 DC Universe, and the pre-52 Superman, returned, along with the old system of numbering, in Action Comics #957 (August, 2016). Since then, Action Comics has been published on a twice-monthly schedule.

There's (even) more to it, which I'm sparing you — annual issues, #0 issues (never mind), four super-sized reprint issues and more — but here's the takeaway: That nice, round #1000 number on the cover conceals a lot of logistical hinkiness, over a long 80-year history.

But again: It's not about the numbering.

So: Is it about the red trunks?

No, It Is Not About The Red Trunks

Nope. I mean, look, it's great that they're back, as of today's Action Comics #1000. They've been gone since 2011, when artist Jim Lee introduced a new super-costume — a suit of flexible Kryptonian armor pointedly lacking the character's signature, much-mocked, underwear-as-outwear red shorts.

The reason for losing them? In interviews, Lee mentioned that they didn't fit with the current superhero couture; they looked old-school, outdated, costumey. Which, in fairness, they certainly did.

Without them, however, the Superman of the comics page has spent the past seven years looking like a particularly steroidal Olympic speed-skater.

Athletic? Sure. But all wrong for the character.

Superman was originally designed to evoke, to readers of the late 1930s, the death-defying wonder of the circus. Kids saw his skin-tight outfit and thought of trapeze acrobats who soared through the air — like he did — and of strongmen who lifted tremendous weights — like he did. Those superfluous trunks were essential to capturing a sense of the Big Top, where the everyday world was replaced by one of marvelous feats and garish spectacle.

That look isn't outdated, it's timeless. So it's only fitting (snerk) that the trunks are back where they belong. But they're not the real reason to celebrate.

The Real Reason To Celebrate

It's back, too, which makes sense: If the trunks are back, you kind of need something to hold them up, no? But of course, the yellow belt's always served a far more important, more central, purpose.

Before we get to what that is, let's talk about how dumb he looks without it.

Lee's 2011 redesign of the super-suit — dubbed by some (okay: by me) the Apolo Oh-No Look — lost the shorts, but retained the belt, turning it red in the process, and transforming its classic oval buckle into an echo of the S-shield on his chest.

(In this, it recalled 2006's Superman Returns, in which Brandon Routh's Man of Steel sported a yellow belt (yay!) with a huge S-shield buckle (redundant!)).

The 2013 film Man of Steel ditched the belt entirely, but then, for no readily discernible reason, retained the buckle: It sort of ... floated there, amid the heavily contoured sea of blue that rippled just above Henry Cavill's groin, looking for all the world like a button begging to be pushed. I kept wanting to reach out and press it, half-expecting him to giggle when I did so, like a steroidal blue Poppin' Fresh.

In the comics, the belt's spent the last few years as a thin, utility-free red band, highlighted with a yellow, S-shield buckle.

(My objection to the S-shield belt buckle is simple: It's fussy. It insists on itself. The guy's already wearing a giant S-shield on his massive chest, it's not like we're going to forget who he is, should our eyes happen to wander a few inches down his torso ("Oh right! He's Superman! Right! Got it!"). We are not goldfish.)

No, here's why the return of the yellow belt is so important. Here's its true, vital, abiding purpose:

Comics are a visual medium, in which images and words combine to produce an instantaneous, visceral effect in the brain. And when it comes to superhero comics, their appeal is visual first, textual second. Superheroes are bold, simple, iconic creations of color and line; they are, in a very real sense, fashion personified.

Superman most of all: He is a character of primary — and primary colored — appeal. Batman, a creature of shadow, is about his silhouette — those ears, that billowing cape.

Superman is about his color scheme — bright, friendly, familiar. Purely as a artisanal blend of design elements, he hits our retinas from three discrete but cohesive points on the color wheel: The blue of his suit. The red of his cape (and his boots, and his trunks). And the yellow of his belt.

That horizontal bolt of gold is key: It breaks up his look, and picks up on the yellow in his S-shield. Slide it through those (old-school, costumey) red belt loops — one on either side of the oval buckle, exactly equidistant — and it brings the whole outfit together.

So yes: Congratulate the folks behind Action Comics on hitting 1000 issues (while acknowledging the nuances behind that number, and that Britain's weekly 2000 A.D. comic hit issue #2076 last week, while Japan's weekly Shonen Jump has been going strong since since 1968). And rejoice at the return of the red shorts, in all their three-ring, five-beltloop glory.

But do not do so without taking a moment to welcome Superman's yellow belt, — the Man of Tomorrow's Accessory of Tomorrow — back from its extended, wrongful sentence in comics' sartorial Phantom Zone.