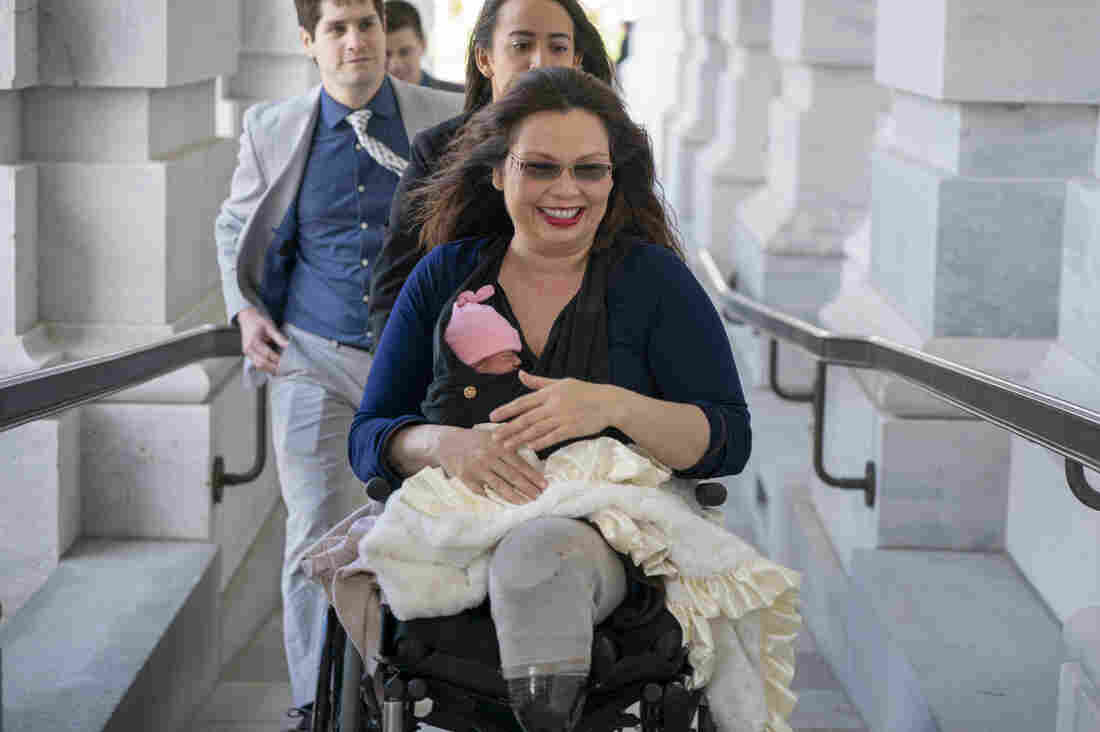 Sen. Tammy Duckworth, D-Ill., arrives at the Capitol for a vote with her new daughter, Maile, on Thursday. J. Scott Applewhite/AP hide caption 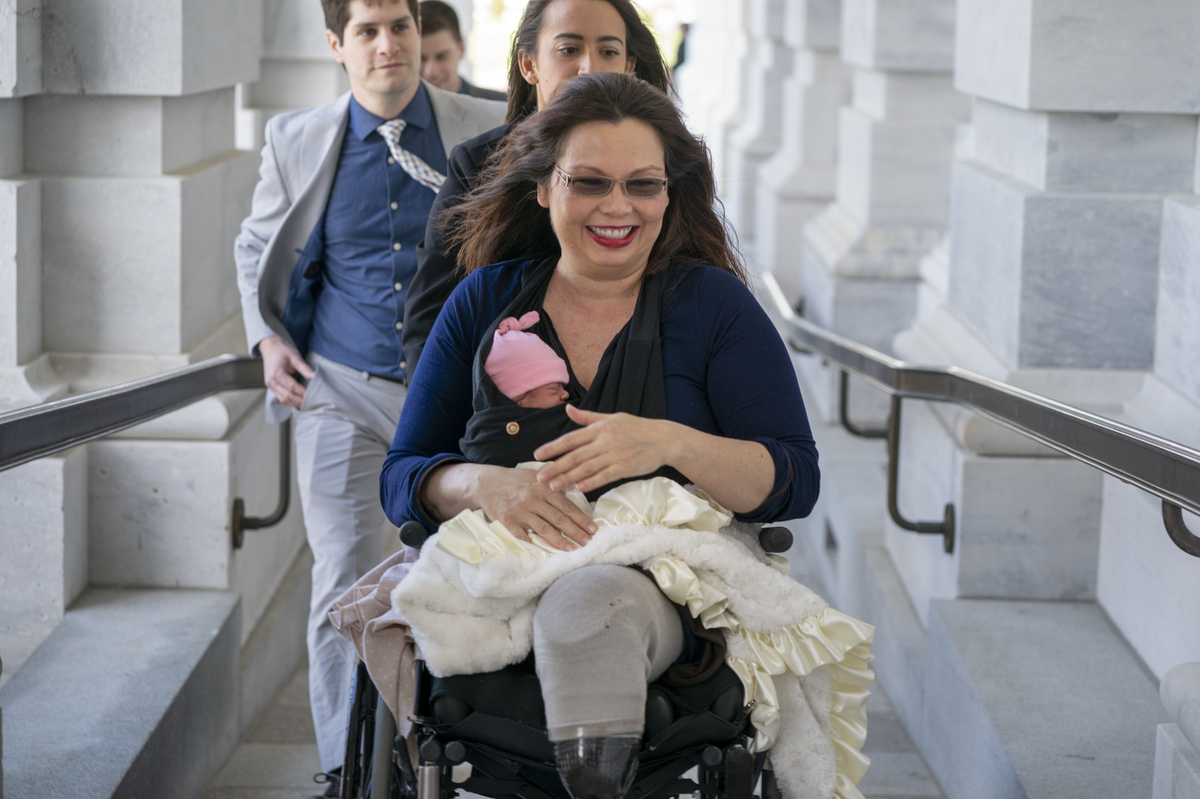 Sen. Tammy Duckworth, D-Ill., arrives at the Capitol for a vote with her new daughter, Maile, on Thursday.

Maile Pearl Bowlsbey is just over a week old and already is helping force more change in the Senate than most seasoned lawmakers can even dream. On Thursday she joined her mother, Illinois Democratic Sen. Tammy Duckworth, on the Senate floor for a vote.

The newborn's appearance was made possible by a unanimous decision by the Senate on Wednesday evening to change its rules, which typically allow only senators and a handful of staff into the Senate chamber during votes. Now, lawmakers can bring along children under 1.

In response to the change on Wednesday, Duckworth thanked her colleagues "for helping bring the Senate into the 21st Century by recognizing that sometimes new parents also have responsibilities at work." Her statement added, "These policies aren't just a women's issue, they are a common-sense economic issue."

Duckworth gave birth to Maile, her second child, on April 9 and wanted to keep her newborn nearby when she is doing her job as a senator.

I may have to vote today, so Maile’s outfit is prepped. I made sure she has a jacket so she doesn’t violate the Senate floor dress code (which requires blazers). I’m not sure what the policy is on duckling onesies, but I think we’re ready pic.twitter.com/SsNHEuSVnY

"I think we ought to accommodate people as much as we can," said Alabama Republican Richard Shelby ahead of the rule change. "The Senate I guess has evolved slowly for a long time, but evolution is always going on."

Rules Committee chairman Roy Blunt, R-Mo., said some of that slow evolution might be because Duckworth is the first senator to ever give birth while in office.

Blunt said he had been working with Minnesota Sen. Amy Klobuchar, the top Democrat on the Rules Committee, to approve the measure quickly and without opposition from any senators.

"Every day moms and dads balance being great parents and successful professionals, and workplaces need to recognize that reality," Klobuchar said in a statement on Wednesday. "The United States Senate should be no exception."

Senators said the bill seems like a fairly common-sense accommodation that reflects the Senate as it is today — with 23 women and a handful of younger parents.

Sen. Susan Collins, R-Maine, said the rule is also narrowly written to allow parents of children under a year to perform their duties without being separated from their children and to allow the business of the Senate to go on uninterrupted.

"It was a very practical debate of how does a new mother mange to vote and yet take care of her child," Collins said. "Now, obviously it would interfere with our ability to get our work done if we had lots of toddlers crawling around."

All of this might seem like a pretty simple and logical change, but the Senate is often a slow, tradition-bound place. The rules are so hard to change that it took Budget Committee chairman Mike Enzi, R-Wyo., years to get his fellow senators to allow him to bring a laptop to the floor to keep track of tricky amendments during a budget debate.

"I was disrupting the progress of the Senate, supposedly," Enzi said. "One senator told me that he couldn't type, and if I was typing he'd feel compelled to explain to his constituents that he couldn't."

Enzi said that allowing a parent to bring her infant along so she can follow through with Senate duties is an entirely different, more important issue. Plus, he says, Duckworth's argument has another impressive edge: "Mothers are more persuasive than men."