Accessibility links
Pushing Impeachment Would Backfire On Democrats, NPR/PBS NewsHour/Marist Poll Finds With the president's low approval ratings, Democrats have an advantage heading into the midterms. But Republicans could use the threat of impeachment to motivate their voters to get to the polls. 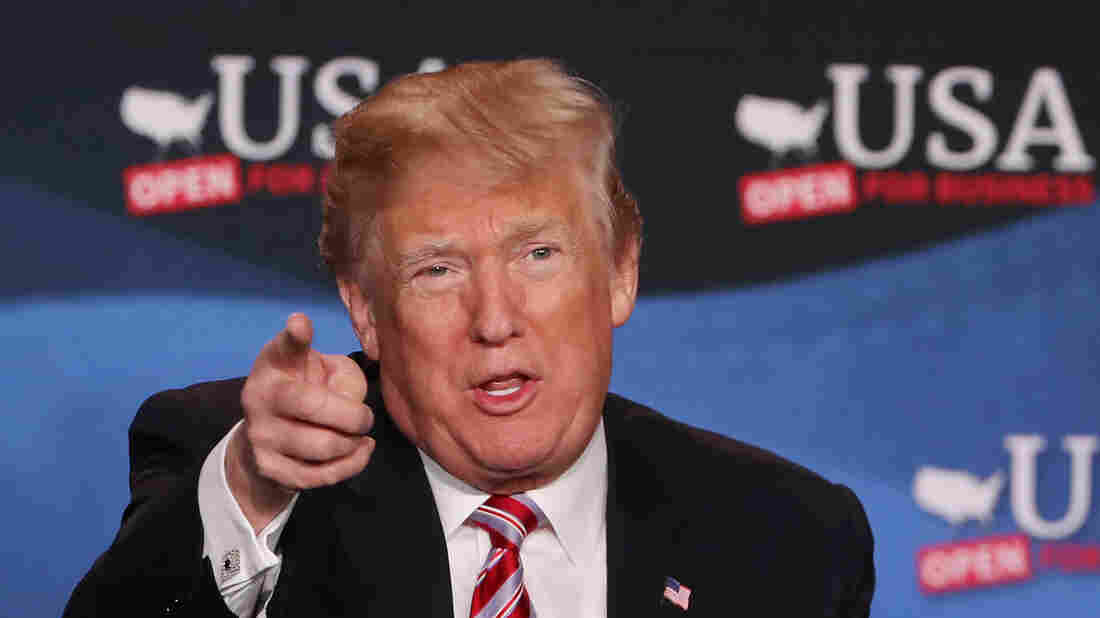 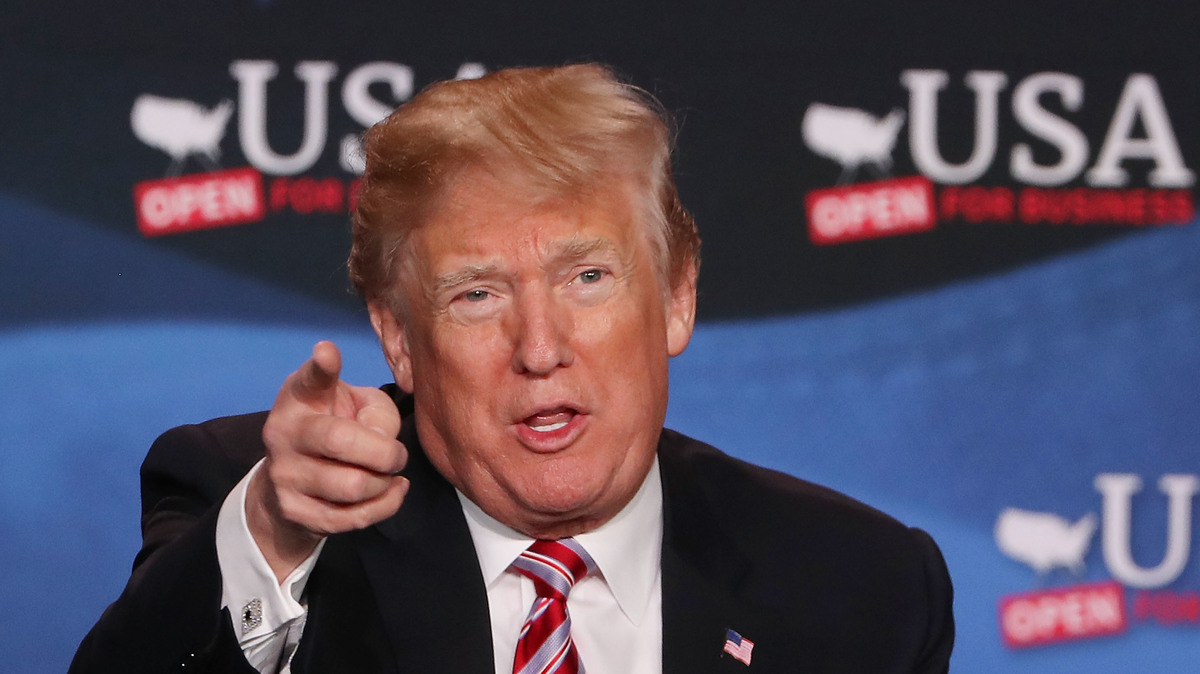 President Trump speaks during a roundtable discussion about the Republican tax cut package on Monday in Hialeah, Fla.

Pledging to impeach President Trump would backfire on Democrats hoping to take back the House of Representatives this fall, according to a new NPR/PBS NewsHour/Marist Poll.

Unsurprisingly, impeachment is a nonstarter with 84 percent of GOP voters. And Lee Miringoff, the director of the Marist Institute for Public Opinion, said arguing to voters that Democrats would try to stymie Trump and remove him from office could be one of the most salient messages for Republicans this fall, especially given Trump's low approval ratings and rising frustrations with Congress.

"The threat of impeachment provides Republicans their best point of attack looking toward the midterm elections, and I think we're going to hear a lot more about it from their arsenal as they try to isolate the Robert Mueller investigation and delegitimize it," said Miringoff. "If there's a silver lining for Republicans in this data, it's the impeachment question."

It's Democrats from more liberal districts who have been making noise about impeaching Trump, while members in more competitive swing districts — which Democrats will need to win to reach the 23 seats required to take back the House — have generally opposed such an idea. Democratic leaders don't want to make impeachment a central tenet of their pitch to voters and are fearful it could backfire with voters, just as this new poll suggests, but major donor and California billionaire Tom Steyer has launched a major campaign pushing to oust Trump.

Democrats would need only a simple majority in the House to impeach Trump — something that's happened to only two other presidents in the country's history. To remove him from the Oval Office, which has never been done before, would take a two-thirds majority in the Senate to convict him of any articles of impeachment, which could theoretically arise from Mueller's investigation.

The promise of impeachment isn't a winning one even with all Democrats, either. While 70 percent of Democratic voters would back a candidate who favors impeachment, 3 in 10 would either vote against such a candidate (18 percent) or are unsure (12 percent).

Democrats Weigh The Political Risks Of Calling For Trump's Impeachment

Democrats Weigh The Political Risks Of Calling For Trump's Impeachment

There's also a major age gap in those who want to remove Trump through the most extreme measures versus those who don't — 57 percent of voters under 30 support impeachment, but 55 percent of those 60 and older oppose it.

Democrats don't have a huge edge in polling either when it comes to November's midterm election, but they still have a consistent advantage.

On the generic ballot question, which measures whether voters would prefer a Democratic- or GOP-controlled Congress, Democrats have a 5-point edge, 44 percent to 39 percent. Independents break for Democrats by a 6-point margin, 38 percent to 32 percent, with 16 percent still undecided.

Democrats had an advantage as high as 11 points at the beginning of February — which exceeded the edge of about 7 to 8 points most analysts believe Democrats need to hit to retake the House, though polling later in the summer may be more predictive. Still, the 5-point edge for Democrats is the same as they held last month. 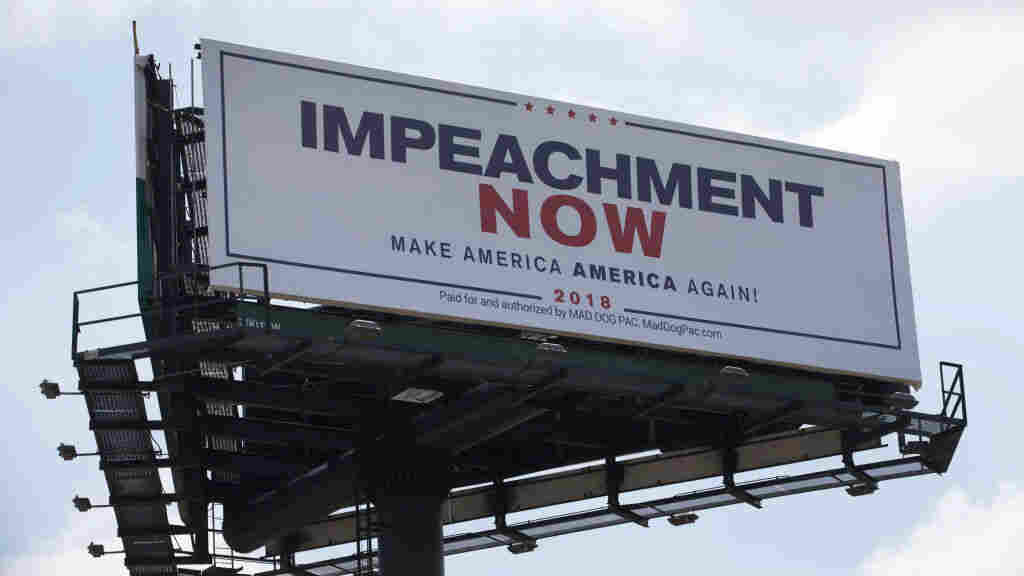 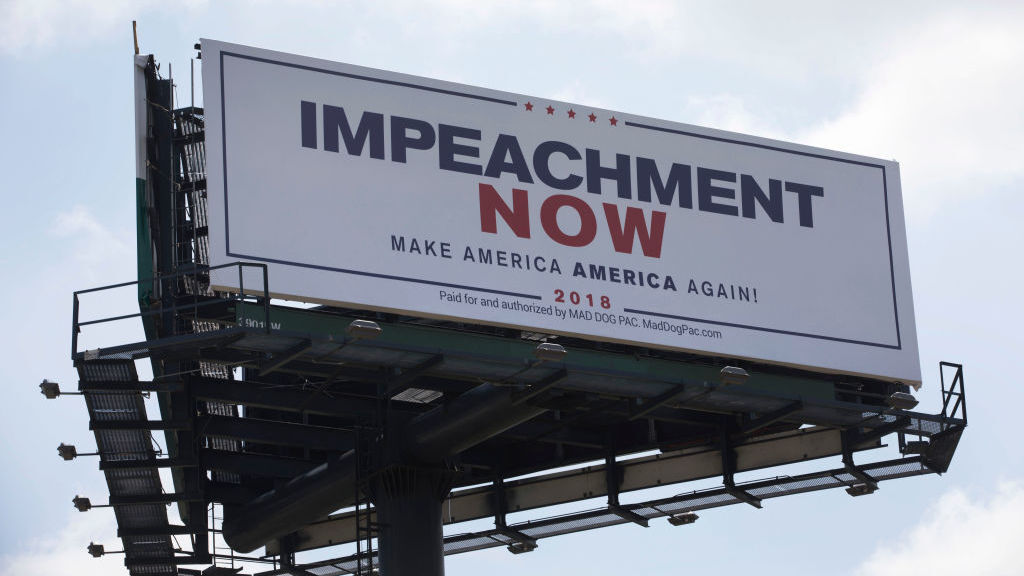 This billboard calling for President Trump's impeachment is placed along a street leading to his Mar-a-Lago resort in West Palm Beach, Fla.

The better predictor for Democratic fortunes in the midterms may be Trump's approval rating, which has remained stagnant at 38 percent in this poll: 54 percent of all adults disapprove of the job he has done, including 40 percent who strongly disapprove.

Miringoff noted that in the 18 polls Marist has conducted since Trump was inaugurated, his approval rating has been somewhere between 35 and 42 percent — not an encouraging sign for an incumbent president ahead of his first midterm, when the president's party typically loses seats.

"It's not a good number for members of Congress in competitive seats to be looking at when they're planning their re-election strategy," he said. "They can't attack Trump for fear of turning off their base, but they still have to reach out to voters who are turned off by the president."

Trump's approval rating is still strong with Republicans at 79 percent, with 13 percent disapproving. And 53 percent of white men approve of Trump's job performance, including 31 percent who strongly approve.

Trump also lags across the board with all age groups, including even older voters. Middle-age voters between the ages of 45 and 59 are nearly evenly split on the president, with 48 percent disapproving and 47 percent approving. But with voters 60 and older, half say they disapprove of the job he has been doing, with 42 percent approving. And of those senior citizens who disapprove, a 39 percent plurality say they strongly disapprove.

Fifty-six percent of adults also say the country is moving in the wrong direction, with just 36 percent saying it is moving in the right direction. With Republicans in control of Congress and the White House, those pessimistic numbers could also prompt voters who want a change to vote for Democrats, perhaps acting as a check on Trump.

Americans want Congress to focus on health care, not a border wall

One of the president's top legislative priorities doesn't garner much support among the public, either. Just over half of Americans (55 percent) said building a border wall between the U.S. and Mexico should not be a priority for Congress at all, with just under a quarter saying it should be an immediate priority. Roughly half of Republicans say it should be an immediate priority, though 20 percent still say it shouldn't be a priority at all.

There is a groundswell for Congress to act to change gun laws, reform health insurance and protect DREAMers, who were brought to the U.S. as children illegally. Health insurance is the biggest priority Americans want their legislators to address, with 72 percent saying Congress should take immediate action on it. There's some rare bipartisan agreement here too, with 73 percent of Democrats, 66 percent of Republicans and 73 percent of independents all wanting Congress to immediately address the issue.

Just over half of Americans (52 percent) also say stricter gun laws should be an immediate priority, with 27 percent saying it shouldn't be a priority at all. Unsurprisingly, there's a big partisan divide underlying those numbers — about half of GOP voters (47 percent) say stricter gun laws shouldn't be a priority at all, while three-quarters of Democrats and half of independents say it should be an immediate priority.

A lack of confidence in Congress is more consistent across party lines. Seventy-eight percent of Americans say they don't have very much or any confidence at all in the legislative branch. Those who share that view include 81 percent of Democrats, 82 percent of independents and even 76 percent of Republicans (whose party controls both the House and the Senate).