Accessibility links
Payday Lenders Convening At A Trump Resort Are Met By Protesters The industry is holding its annual conference this week at Trump National Doral Golf Club near Miami. Critics say a Trump appointee is helping the industry by moving to ease regulations. 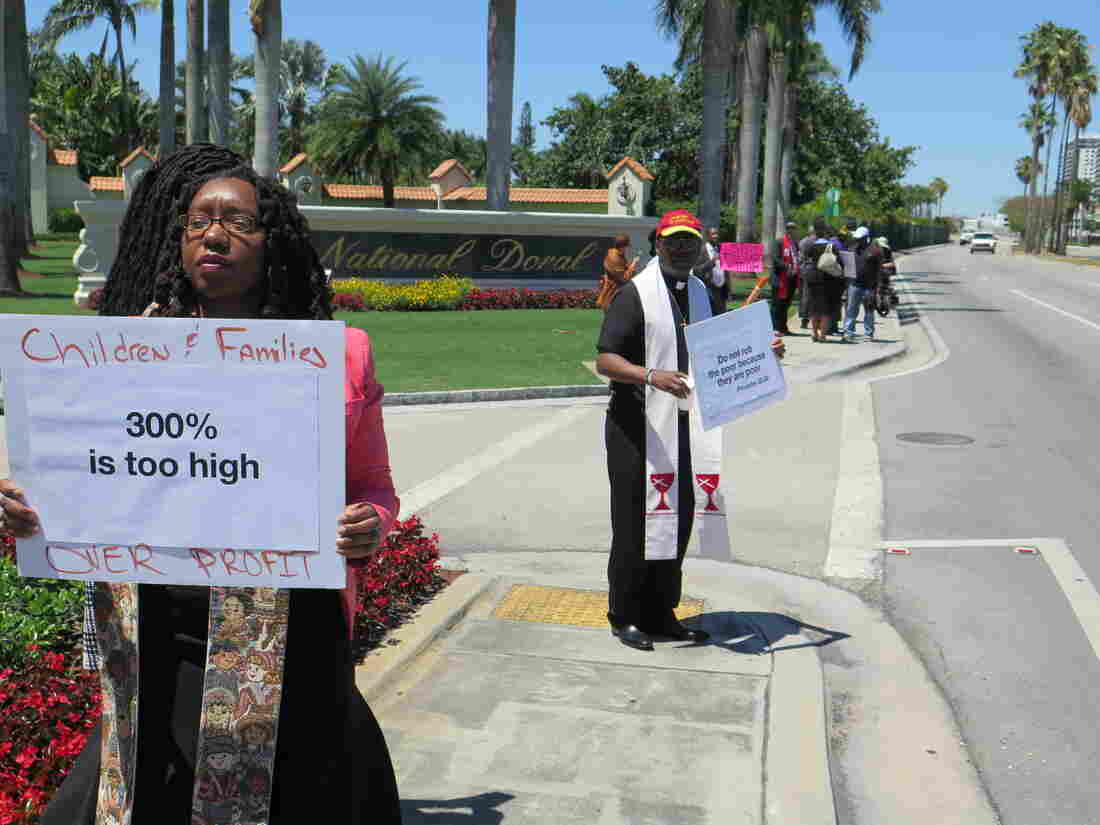 The Rev. Sekinah Hamlin (left) of Greensboro, N.C., and the Rev. Dr. Jack Sullivan Jr., of Findlay, Ohio, were among the faith leaders protesting outside the payday lenders conference near Miami. Greg Allen/NPR hide caption 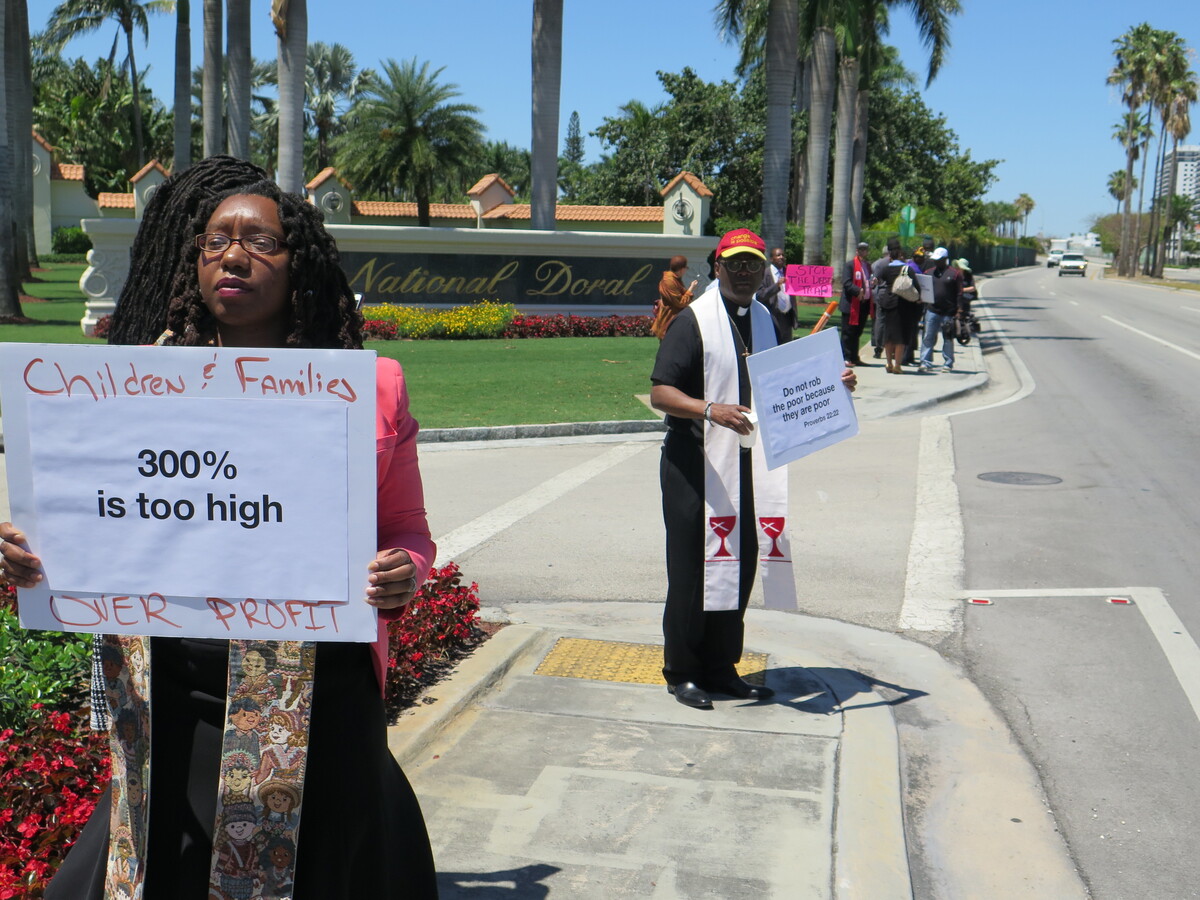 The Rev. Sekinah Hamlin (left) of Greensboro, N.C., and the Rev. Dr. Jack Sullivan Jr., of Findlay, Ohio, were among the faith leaders protesting outside the payday lenders conference near Miami.

At Trump National Doral Golf Club near Miami this week, executives with the nation's payday loan industry are holding their annual conference with receptions, breakout sessions and a golf tournament.

Outside the gates of the resort Tuesday, a smaller group gathered to hold a protest. They were trying to shame an industry that they say preys on the vulnerable, by lending them money at interest rates as high as 200 percent to 300 percent a year.

"There are people who need small-dollar loans, but this is a trap," said Cassandra Gould, an African Methodist Episcopal pastor from Missouri. "What they don't need is to have to pay $500 back over and over and over and over again, and then therefore be in a worse financial situation then they started off in."

It's been a good year for the payday lending industry. Shortly after taking over as head of the Consumer Financial Protection Bureau, White House Budget Director Mick Mulvaney put tough new regulations for the industry on hold. Since then, stocks for publicly traded payday lenders have shot up.

The rules, published before Mulvaney came on board last year, limited the number of loans payday lender could issue to each borrower. The lenders would also have to make sure the borrower had the ability to repay the loan.

The industry called it overregulation and stepped up its lobbying efforts. The Community Financial Services Association of America, the payday industry's trade group, booked its annual conference at Trump National Doral.

"Any way to gain access or curry favor, they're going to do," said Stephen Reeves, with the Cooperative Baptist Fellowship in Georgia, who came to protest outside the conference. "We've seen this industry is incredibly creative and responsive in the ways it influences — whether it's through lobbyists or campaign contributions. So I don't think this is a coincidence."

The industry's efforts have paid off. After being appointed last year, the CFPB's interim director, Mick Mulvaney, dropped a lawsuit against a payday lender. He has been criticized for taking more than $60,000 in campaign donations from payday lenders while he was in Congress.

In a Senate hearing last week, he said he's reevaluating rules for the payday industry developed by his predecessor, former CFPB Director Richard Cordray. Mulvaney wouldn't speculate on what the final rules will look like. But he told senators that he questioned whether the federal agency he runs has the authority to pass any regulations of the industry.

"The best way to address the problem that you perceive is to pass legislation and not rely on me to do it for you," Mulvaney said in response to a question from Sen. Doug Jones, D-Ala.

Over the past two decades, as states have moved to regulate and in some cases ban payday lending, the industry has downsized. But payday lenders said the proposed federal rules would effectively kill the industry.

Jamie Fulmer, with Advance America, one of the largest payday lenders, said Mulvaney's decision to put the rules on hold is a hopeful sign.

"Everything that we've seen the bureau issue," Fulmer said, "the comments that the director has made, give us to believe that the bureau will be more judicious in their approach."

Payday lenders say they're just responding to a growing demand for what they call "small-dollar credit," a market not being served by banks and credit card companies.

Dennis Shaul, the head of the payday lending industry's trade group, said the decision to hold the conference at Trump National in Doral was about golf and good weather, not politics.

"We're not naïve about the political process," he said. "We've been involved in it." But he said, "You really do not get much out of trading on someone's name or his past endeavors. That was certainly not a factor when we made this decision here."

Although the political and regulatory environment in Washington has improved, payday lenders are worried it could be just temporary. With that in mind, they recently filed a lawsuit aiming to block the payday lending rules from taking effect in August 2019.