Accessibility links
'God Save Texas' Is Essential Reading For Everyone — Even Non-Texans Lawrence Wright is at his best in this new examination of his home state — a thoughtful, beautifully written book about a place that can be hard for outsiders to understand.

'God Save Texas' Is Essential Reading For Everyone — Even Non-Texans

'God Save Texas' Is Essential Reading For Everyone — Even Non-Texans 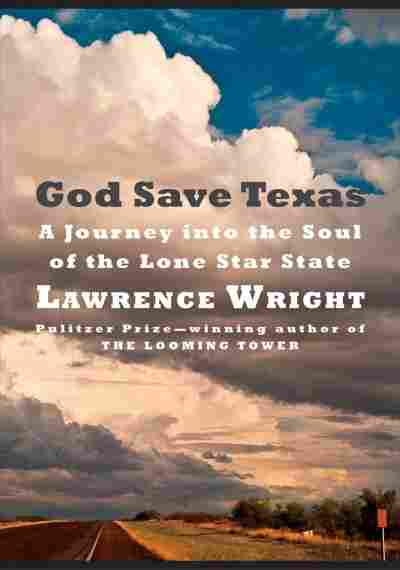 A Journey into the Soul of the Lone Star State

If you grew up in Texas, chances are you've heard the old joke about the man teaching his son about good manners. "Never ask a man if he's from Texas," the father said. "If he is, he'll tell you. And if he's not, there's no use in embarrassing him."

As dad jokes go, it's not exactly the worst, mainly because it gets at two common stereotypes about the Lone Star State: people here do not lack pride in their homeland, and they usually waste no time telling others where they're from. (As a native Texan, I can tell you this is an exaggeration. Texans like me and all of my Texan friends are generally reluctant to discuss our home state, which is Texas.)

On the first page of his new book, God Save Texas, Austin writer Lawrence Wright acknowledges these stereotypes, admitting with an understatement that's rare in these parts, "Subtlety is a quality rarely invoked for anything to do with Texas." He's right, of course — Texas has its virtues, but collective modesty is not among them. It can be hard to explain the appeal of our state to outsiders — the weather's not great; the politics are worse — but Wright does an excellent job illustrating what makes Texas the place it is.

God Save Texas is told in fourteen chapters, each dedicated to a different aspect of the state, including the oil industry, the city of Dallas, and politics (the last one actually gets two chapters; as befitting a dumpster fire of its size). The book starts out with Wright and his best friend, the author Stephen Harrigan, exploring San Antonio's five historic Spanish missions, the most famous of which, of course, is the Alamo. That particular mission — including its gift shop, which Wright accurately describes as "a kind of Lourdes of Texas kitsch" — has become synonymous with the Lone Star State and its attendant stereotypes of "cowboy individualism, a kind of wary friendliness, superpatriotism combined with defiance of all government authority, a hair-trigger sense of grievance, nostalgia for an ersatz past that is largely an artifact of Hollywood."

In one chapter, Wright presents a cogent defense of his home state's cultural scene, writing, "Texas enjoys the singular blessing that every distinct culture must have: a sense of its own apartness. It is in the sound of our voices, the flavors of our food, the rhythms of our music." He notes that Texas brought the world not just Willie Nelson and Matthew McConaughey (whose 1999 weed-and-bongo-fueled arrest in Austin was witnessed by his then-neighbor Wright), but also a Texas Commission on the Arts once headed by someone who proposed naming as the state's poet lariat (you read that right) Jorge Luis Borges, the Argentine author who at the time was residing in Switzerland. In a coffin.

Any Texas writer could produce a "We just do things a little bit different here" kind of book, cataloguing the state's ample quirks; God Save Texas isn't that. It doesn't fit neatly into any one category; it's essentially an apologia with elements of criticism and memoir. Wright is aware of Texas' spotty reputation among outsiders, and he deftly acknowledges that while its critics make good points, there's more to Texas than meets the eye: "Despite the legendary qualities of boorishness, braggadocio, greed, and overall tackiness that are associated with my state," he writes, "there is a lot to love about the traditional elements of our culture."

Wright is one of the most talented journalists Texas has ever produced, and 'God Save Texas' is him at his best.

And while he decries "the liberal loathing for Texanness, even among people who have never visited the place," he's quick to admit the flaws that threaten to keep the state mired in the 20th century, even as the rest of the world marches ahead. He criticizes Texas' "immature political culture," and in one particularly moving section, condemns the state's treatment of undocumented immigrants: "We are complicit in their suffering, however. We take advantage of their weakness, their lack of standing or recourse. ... They are not slaves but neither are they free."

Wright is one of the most talented journalists Texas has ever produced, and God Save Texas is him at his best. It's a thoughtful, beautifully written book about a state that's hard to understand, and one that's become synonymous with, to put it delicately, a unique set of eccentricities. (As Wright points out, "texas" has become a Norwegian slang word meaning "bonkers;" evidently, the good people of Norway have never heard of Florida.) Wright's book is essential reading not just for Texans, but for anyone who wants to understand how one state changed the trajectory of the country, for better and for worse.