Accessibility links
Amy Schumer In 'I Feel Pretty': Beauty And A Bump On The Head Amy Schumer stars in the new comedy about a woman whose freak accident fills her with confidence in what she believes to be her magically altered appearance. 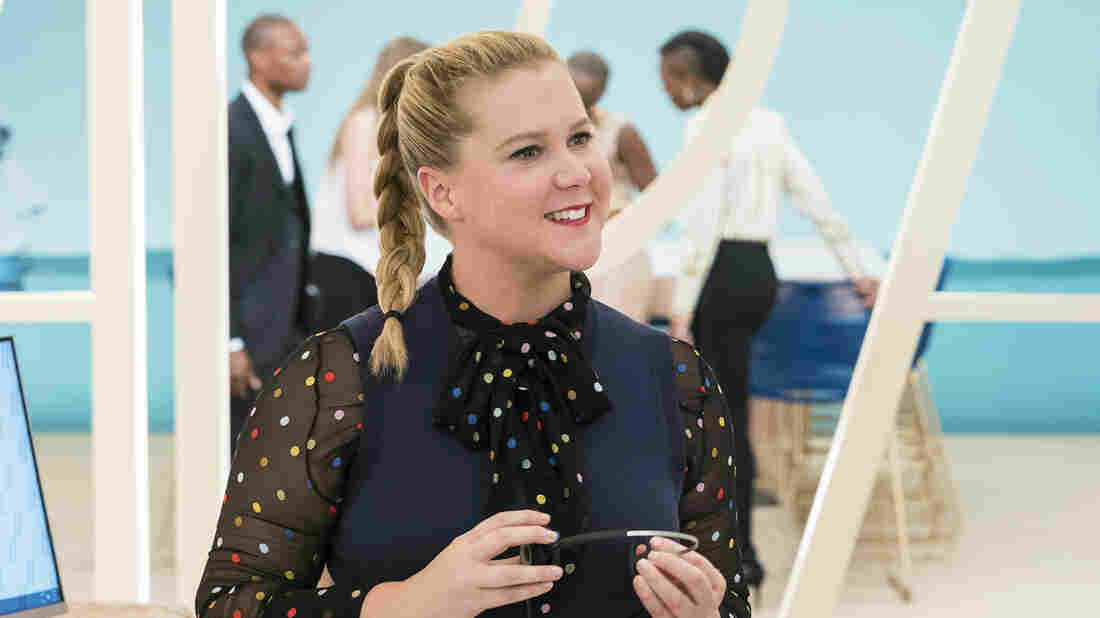 Amy Schumer stars as a woman who acquires a boost of self-confidence after a bump on the head in I Feel Pretty. Mark Schafer/STXfilms hide caption 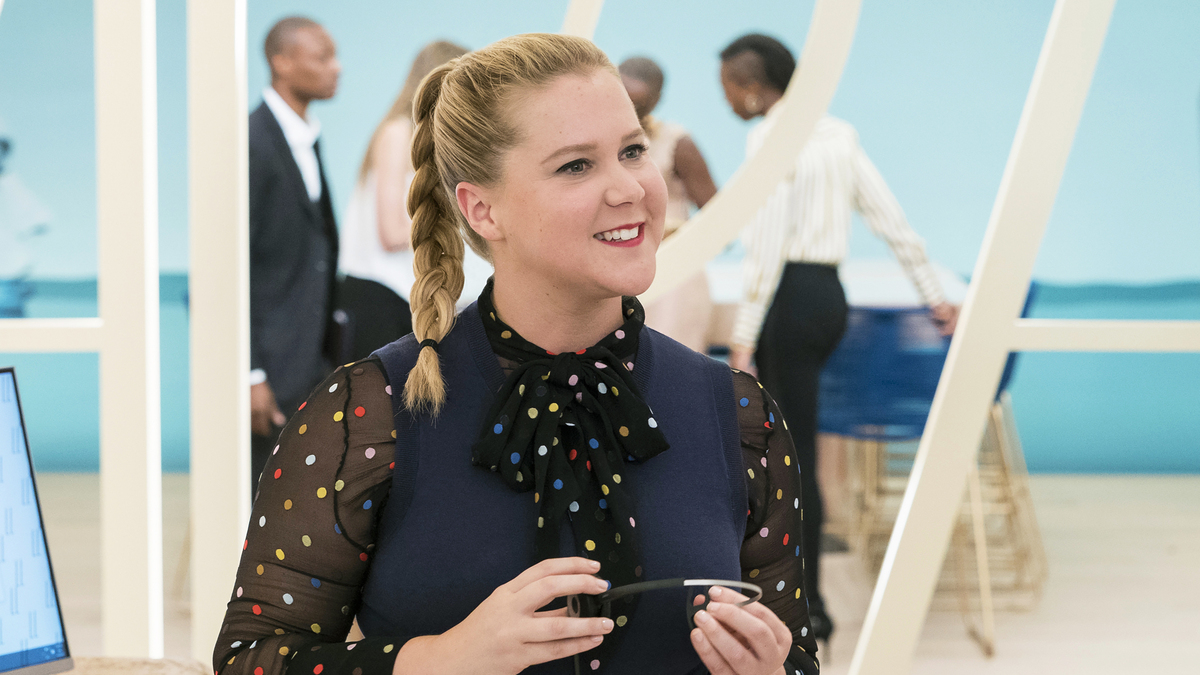 Amy Schumer stars as a woman who acquires a boost of self-confidence after a bump on the head in I Feel Pretty.

Many years ago, at a party where I was very drunk, I asked a much-desired woman of my friendly acquaintance what it was like to be pretty.

While this sounds like such pathos that it could bring down a nation with one massive cringe, all I remember feeling was curiosity that I felt loosened enough to satisfy. No, really: What is it like? It was that kind of conversation — the kind you have on a deck when you've stepped outside of a crowded room to breathe air. Maybe someone else is out there, maybe smoking. You're interrupted periodically by swells of laughter from inside. You start to talk about things that you otherwise wouldn't, not in spite of the fact that you don't know each other that well as much as because of it. And so I asked her what it was like to be pretty, like I might ask someone what it was like to carry triplets or walk on the moon.

My recollection is that she said it really wasn't all it was cracked up to be. She attempted no false modesty because she didn't find it all that impressive a quality to possess. Yes, she was pretty. No, it wasn't that great.

The new film I Feel Pretty, written and directed by Abby Kohn and Marc Silverstein, is aptly named; it's not about what it's like to be pretty as much as what it's like to feel pretty. It's about the mythical power some women attach to being beautiful in those specific ways most commonly associated with social power: thin; smooth and unblemished skin; the "right" bone structure; the "right" kind of chin and nose and wide eyes; the thick and healthy hair of a shampoo model.

For some women, two lessons exist in constant tension: (1) You must be pretty to be valued, but (2) It's really what's on the inside that counts. This can — or so I may have hypothetically heard — set off a repeating loop that goes something like this:

When we meet Renee (Amy Schumer), she is caught in this loop. She feels ugly, so she is SoulCycling and makeup-tutorialing and foundation-garmenting. Her job running a website for an upscale cosmetics company (from a janky basement outpost) seems to be rubbing salt in her own wounds. But at the same time, she is hiding quietly, because nothing has worked yet. She aspires to a beauty that always seems to be a few products away. She doesn't just feel bad about her looks; she feels bad about her entire self, although she works and has friends who love her, who are played heroically by the fantastic Aidy Bryant and Busy Phillips, who need their own comedy, pronto. 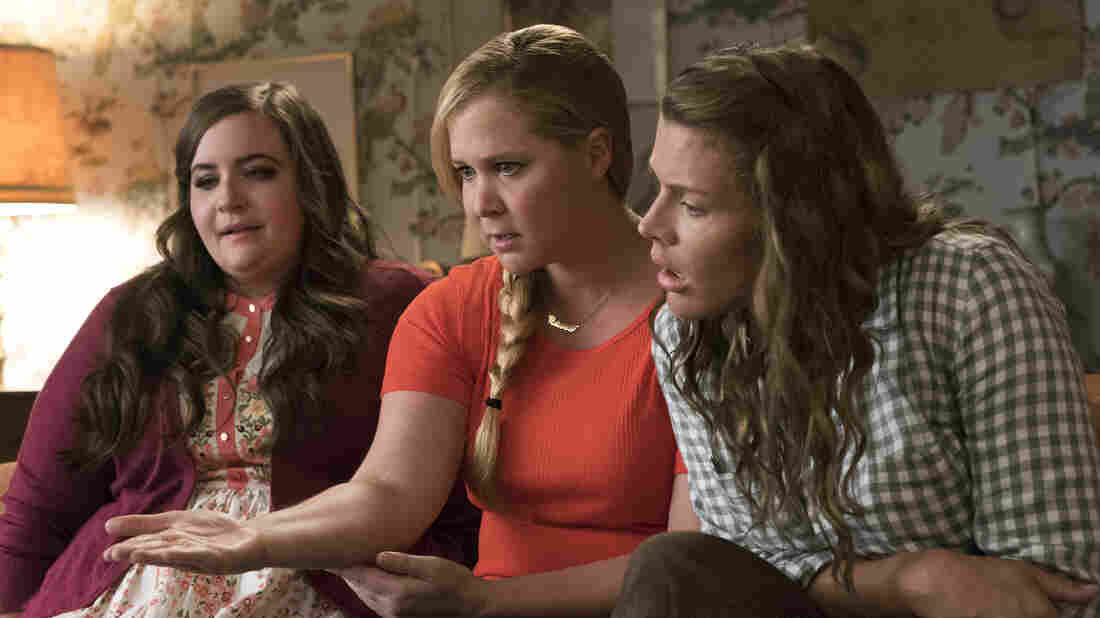 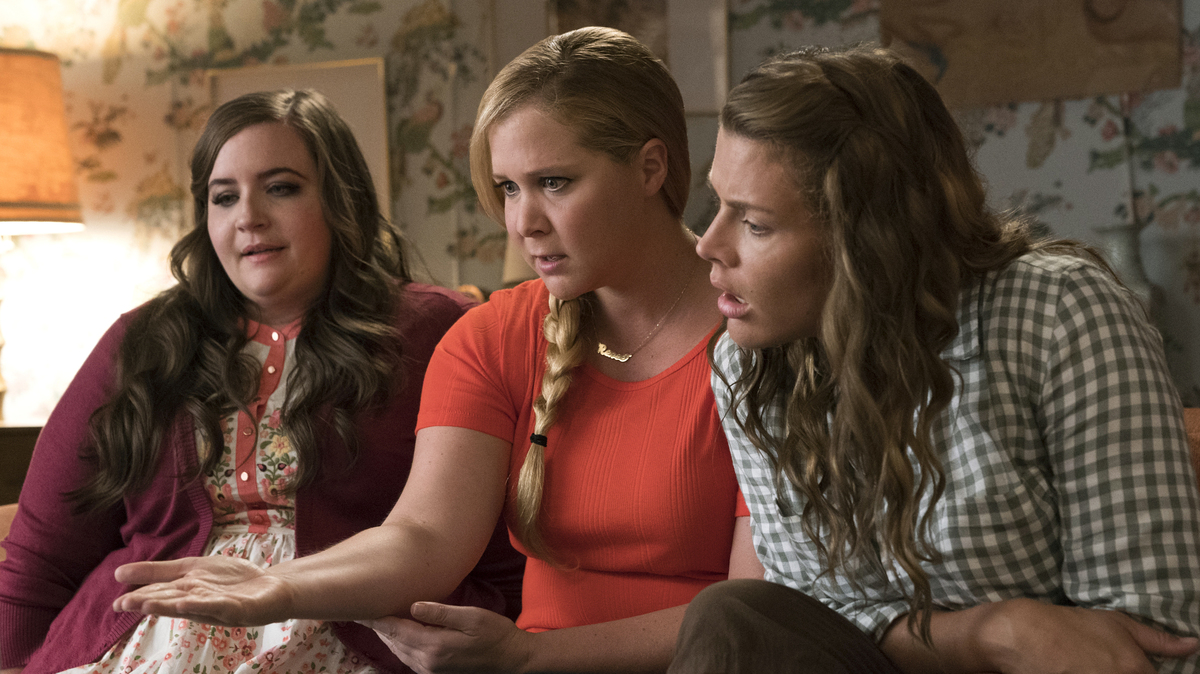 Renee feels as if being beautiful would be the answer to everything and that if she could only achieve it, it would be what she needs. While watching Big (a nice touch), she gets the idea to make a grand wish to be beautiful and see what happens.

Here is one way the movie could have gone from this point: Renee wakes up Gorgeous just as Josh woke up Big, and Amy Schumer is swapped out for some other actress believed to more perfectly represent Hollywood beauty, and she learns that being beautiful isn't everything she dreamed it would be, and then she goes back to being herself, knowing that there's no place like home and the grass is always greener on the other side of the cheekbone and all that.

Here is another way the movie could have gone from this point: Renee wakes up falsely believing herself to be suddenly beautiful, and she becomes a self-involved buffoon who makes everyone miserable, whom nobody likes, until she comes back down to earth and realizes that she's still just her ordinary self, and her relationships are healed.

Here is how the movie actually goes: Renee hits her head and wakes up seeing herself in the mirror as her perfect, beautiful ideal, while everyone else still sees her as she is. Suddenly, she feels confident. It's not a magic bullet, her confidence — the ultra-glam women at the cosmetics company still look crooked at her, still think her confidence is cute but maybe intended ironically. Men don't suddenly flock to her.

But doors do open that previously seemed closed. She meets people through a boldness that, while it's based on bad information, she never possessed prior to this point. She applies for jobs she would not have before. She dances, shakes, spins, wears short skirts she feels great in, expects people to be interested in her, and expects to be good enough for opportunities she wants to take, romantic or professional or otherwise. 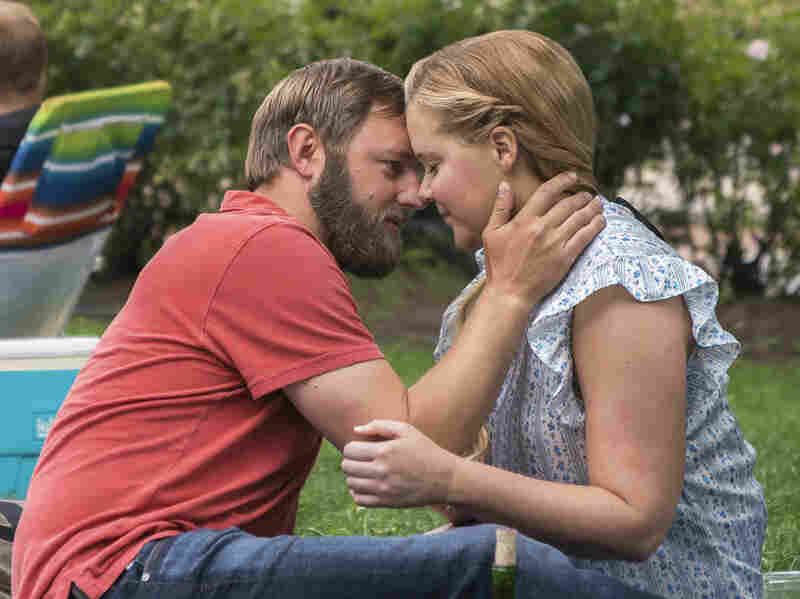 Rory Scovel plays Ethan, who sees Schumer's Renee as she is even if she doesn't. Mark Schafer/STXfilms hide caption 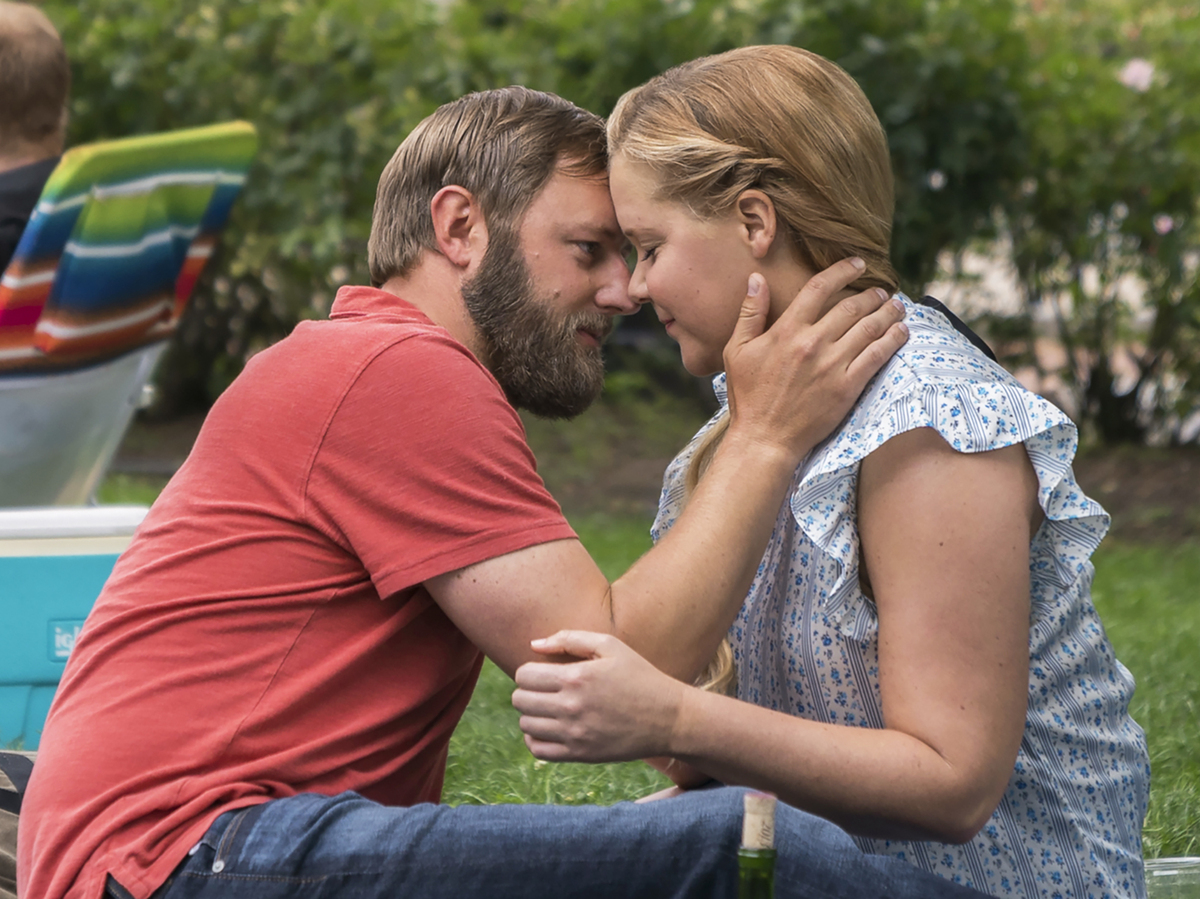 Rory Scovel plays Ethan, who sees Schumer's Renee as she is even if she doesn't.

First of all, sure. But Amy Schumer decided to enter the entertainment industry, and in that context, if by "that fat" you mean "fat enough that she would be constantly made aware of it and at risk of losing jobs because of it," she is indeed that fat. Not if she were in many other jobs. Not if she wanted things besides being an entertainer and a lead actress in movies. But to suggest she can't know from this stuff because she doesn't diverge from those norms enough in the Hollywood context is absurd. That's why it's smart that the film places Renee in a high-end Manhattan cosmetics company. There, she is side-eyed for her looks. If you think she couldn't feel self-conscious in context, I invite you to roll up to any entertainment industry event in L.A. and look around for five minutes.

Second of all, I suspect our actual fat actresses would appreciate not being asked to stand, definitionally, for unattractiveness. What fat actresses we have are often strikingly pretty in conventional terms when it comes to literally everything except being fat, and I'd rather they weren't expected to stand up in every project like this, where their size alone is supposed to make them ugly. They make Spanx for women with a 24.5-inch waist. Worrying about your belly is not limited to women who shop at Lane Bryant, and it's not the job of plus-size actresses to assume they are unattractive for the education of other people.

The closest a lot of films get to considering the role of appearance is the makeover. And the makeover is rather a nauseating device, if you think about it. Generally, the way it works is that the woman is sort of mousy, so the man isn't interested in her as anything except a friend and then she gets a makeover and it turns out that she was just hiding the beautiful woman within. Suddenly, he sees her for the potential love interest she has been all along.

This goes back to a romanticized version of "it's what's on the inside that counts." It holds that if you are wonderful on the inside, then you are actually also physically beautiful and you're just hiding it. Once you translate that inner beauty into outer beauty, congratulations: You deserve love! And very often, that makeover comes from a very particular kind of confidence: the newfound confidence in the looks you have.

I Feel Pretty is almost a reverse makeover movie. Renee gains confidence not in the looks she has, but in looks she doesn't have. We never see exactly what it is she sees when she looks in the mirror, which is smart: It saves the film the endless so-there-ing about "Frankly, I think she looks better as Amy Schumer." What changes is not her looks, but her relationship with her looks. So what matters is that Renee is seeing whatever it is that Renee has always wanted to see when she looks in the mirror, and it transforms aspects of her behavior. It's not just the new confidence, but the release of what's obviously an ocean of anxiety over her appearance. Suddenly, she barely knows what to do with the energy she has been spending fretting over how she looks sitting next to the other people at SoulCycle.

The best-executed element of the film is Renee's relationship with Ethan, a guy she meets at the dry cleaners, played by Rory Scovel. We know all along that he is seeing Renee as she is, but she doesn't. She isn't able to appreciate what he first likes about her, which is her boundless confidence, because she thinks it's just the glow she gives off by looking so physically beautiful. Scovel's performance is quiet and canny as Ethan watches and considers Renee, and some of their scenes even explore her assumption that only women are ever nervous about how they look.

What works less well is the way Renee's relationships with her friends grow tense after her change in perspective. Bryant and Phillips are just divine in these roles, and there's not nearly as much meat on the bones of the friendship story as there is with the romantic story. I wished there were more.

Maybe the weirdest, most delightful surprise in the film is Michelle Williams — yes, four-time Oscar nominee Michelle Williams — having an apparently great time as Avery, the squeaky-voiced granddaughter of the cosmetics company's founder, played by Lauren Hutton in another nice bit of casting. To say that Williams has not made a career of light comedy is an understatement, but what a hoot (yes, we're going with "hoot") to see her suddenly row in an entirely different direction, performing her own feat of reinvention.

It's not a perfect film, by any means. Parts of it are as corny as a muffin, and there's an entire male character I would argue is superfluous and could have been excised without anyone even noticing. But it's trying to be about something that very few films are about, which is internalizing the mystical power of beauty so much that just your belief in it can change your behavior positively or negatively.

So maybe you don't break that endless loop by changing your looks. Maybe you break it by giving up that wild curiosity, that desire to know what it would be like. It's possible to chase happiness, after all, even if you never carry triplets or walk on the moon.