Accessibility links
Tariffs On Canadian Newsprint Choke Already Troubled American Papers "It's like little by little, more and more, the life of the newspaper is leaving," laments Avis Little Eagle, who publishes a paper on the Standing Rock Indian Reservation. 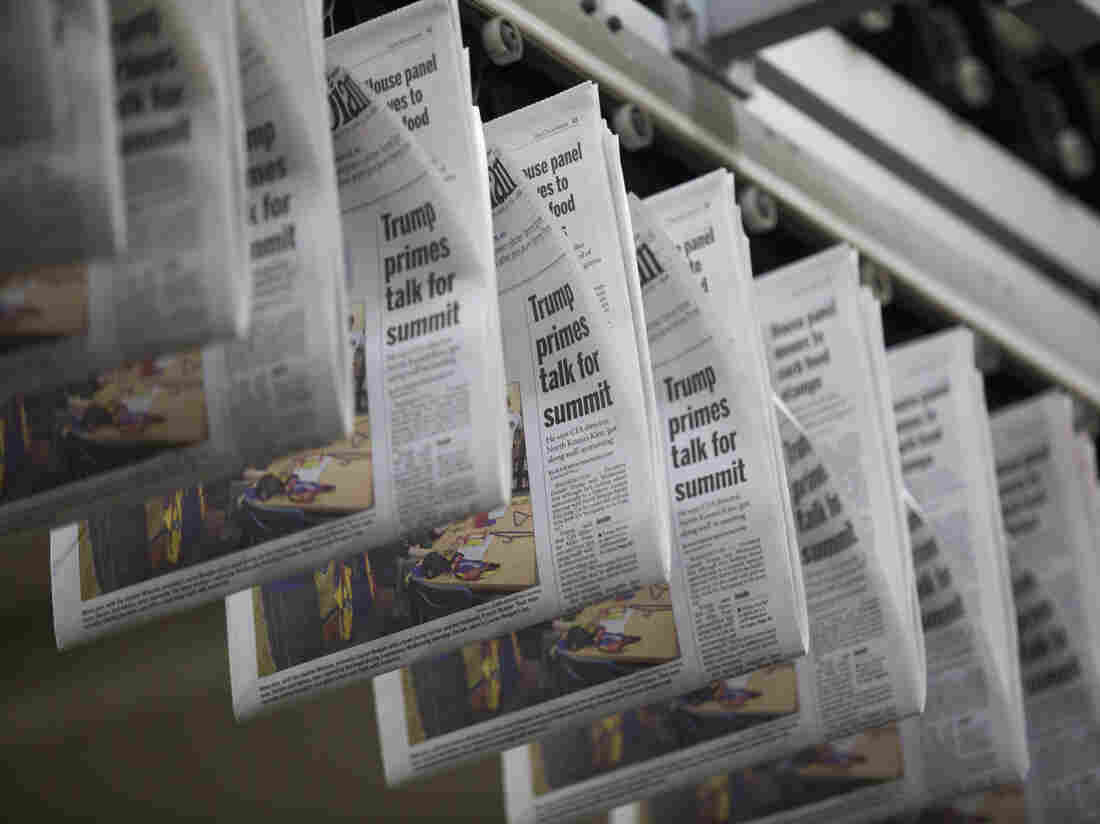 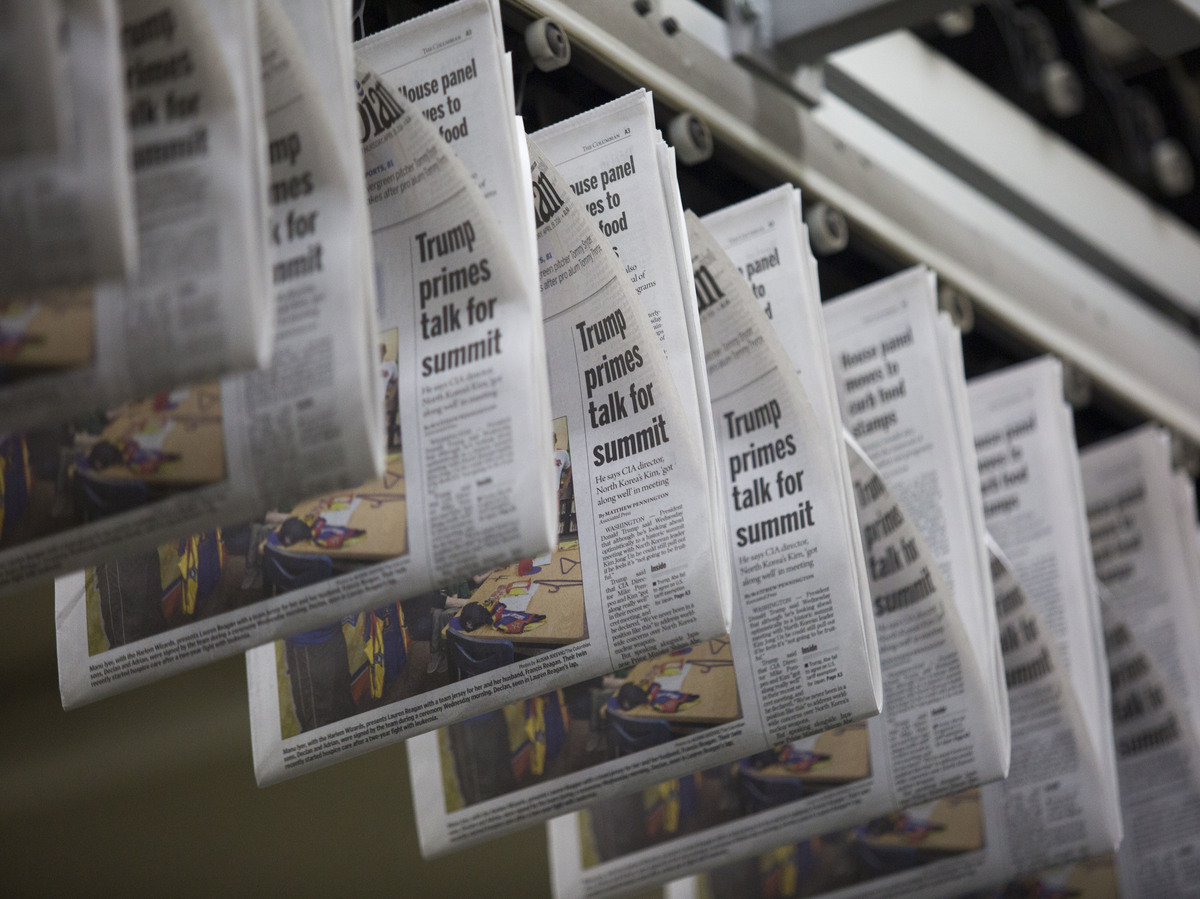 A daily edition of The Columbian passes overhead at the paper's printing press in Vancouver, Wash.

It's no secret that the Internet has been hammering newspapers. Ad sales and subscriptions have been falling for years. Now, there's a new problem — the actual paper newspapers are printed on just got much more expensive.

Since the first of the year, the Commerce Department has imposed steep tariffs of up to 32 percent on newsprint imported from Canada. While that's boosting profits for the five remaining U.S. newsprint mills, the preliminary tariffs have raised prices nationwide and triggered something of a crisis in an already troubled industry.

If you want to know the latest about the local hospital funding crisis, city hall or high school sports in rural Marysville, Kan., the Marysville Advocate has you covered. In fact it's the only place to get that news. But as with most all papers the Advocate's renewals are declining while newsprint, the paper's second-largest operating expense, is becoming much more costly.

"It's tough. It's getting tougher," says Sarah Kessinger, the Advocate's editor and publisher. "Especially with these newsprint tariffs coming into the picture."

"If that trend continues, it will really make our profits ... disappear," frets Kessinger.

And it's not just small papers. The Tampa Bay Times is laying off around 50 people, responding to price hikes it says will drive its newsprint bill up by $3 million a year.

A single manufacturer is to blame, says Al Cross, who heads the Institute for Rural Journalism at the University of Kentucky

"We have a complaint by one paper mill," says Cross, referring to the complaint that launched the Commerce Department trade investigation and subsequent preliminary tariffs. "It's just crazy. The industry is being turned on its head by the manipulation of trade laws."

That one mill is the North Pacific Paper Co., on the banks of the Columbia River in Longview, Wash. Its CEO, Craig Anneberg, doesn't buy the newspaper industry's hardship story.

"We strongly disagree with the notion that the industry requires low-priced, subsidized newsprint from Canada to sustain their business model," says Anneberg.

Anneberg says Canadian newsprint mills benefit from cheap hydroelectric power and state-owned forests. He says that some sell below cost in the U.S., taking over most of the market, depressing prices and forcing layoffs at his mill.

"I mean, we have some of the largest, fastest, most technologically advanced paper machines in the world and we sit in a very good wood basket here in the Pacific Northwest with the ability to ship anywhere in the world and for certain across the country," boasts Anneberg. "And if we couldn't compete, if we were having to shut down one of our machines, it looked like something wasn't right."

The newsprint business has been rough, and Mark Pitts should know. Pitts, the executive director for printing-writing and pulp at the American Forest and Paper Association, says U.S. demand has cratered. U.S. newspapers are buying about 80 percent less than they did two decades ago, and that's forced mills on both sides of the border to close.

"I think it's pretty clear that the predominant challenge out there isn't about imports; it's about declining demand," says Pitts.

With more and more people reading news on screens, not paper, Pitts says the industry is in a vulnerable position. He says tariffs driving up newsprint prices will just accelerate that trend, further depressing demand and hastening the decline of the newsprint industry.

That's already happening on the Standing Rock Indian Reservation, which straddles North and South Dakota. Avis Little Eagle, who publishes the newspaper there, says rising printing costs caused by the tariffs on Canadian newsprint are killing the Teton Times.

"It's like a stranglehold — I just feel like you're getting the life choked out of you. It's like little by little, more and more, the life of the newspaper is leaving," she laments, with a chuckle of resignation.

Little Eagle says most of her customers don't have Internet access, so her printed paper is the only way they know what's going on with local government or whose kids made the honor roll. Slumping ad revenue had already forced Little Eagle to cut two of her four employees, close an office and let her website go dark. But two weeks ago, between falling income and jumps in printing costs, she reached an impasse.

"I was like, oh my God, I can't even print the paper this week. And so that's pretty darn close," she says.

The Teton Times is still hanging on by a string, for now.

The Commerce Department will decide whether to finalize or lift the tariffs on Canadian newsprint by late summer. Meantime, high newsprint prices will keep cutting into newspaper profits and undermining demand for the paper in newspaper.