Accessibility links
How Pokemon Inspired A Citizen Science Project To Monitor Tiny Streams How do we accurately forecast the amount of water that will be available any given year? It's not easy. But some Colorado scientists think they're onto a possible solution — inspired by Pokemon. 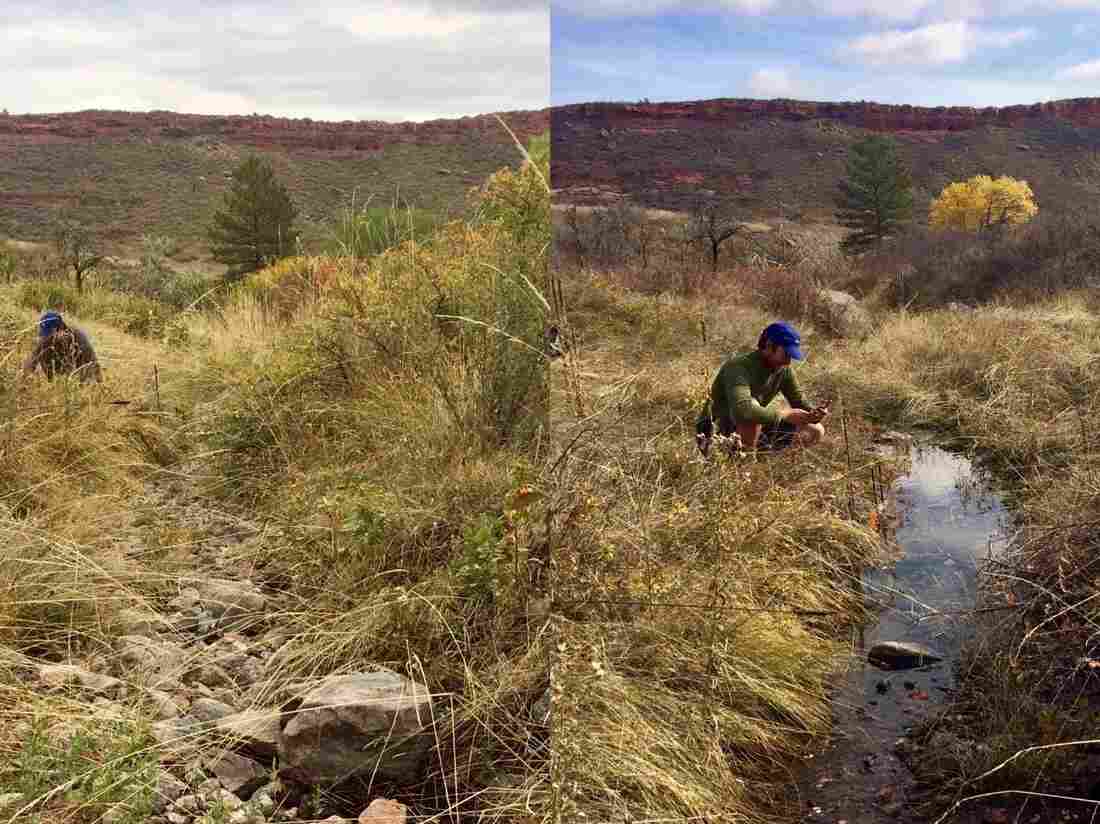 In the fall of 2017, left, Stream Tracker volunteer John Hammond found this creek near Fort Collins, Colo., to be dry. A year later, it was flowing again. Kira Puntenney-Desmond/Colorado State University hide caption 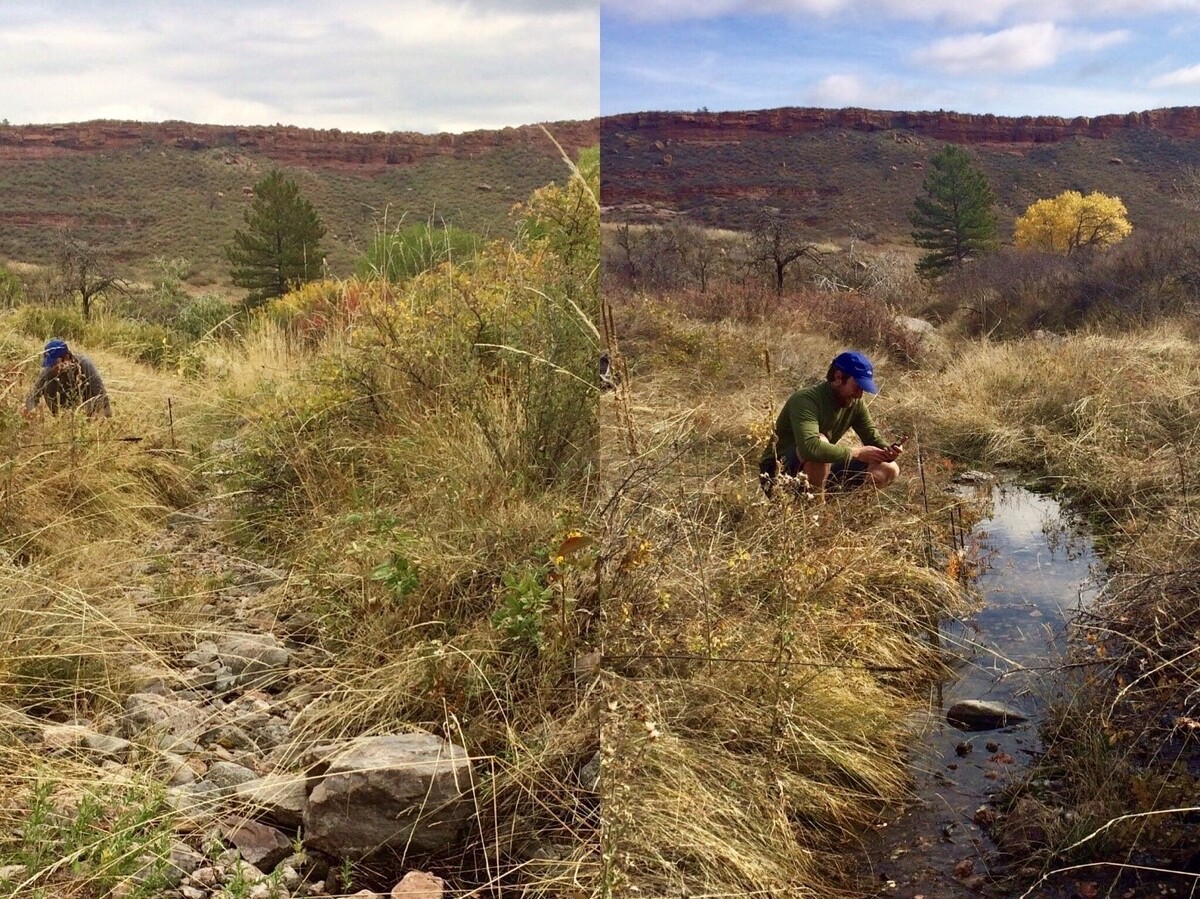 In the fall of 2017, left, Stream Tracker volunteer John Hammond found this creek near Fort Collins, Colo., to be dry. A year later, it was flowing again.

The spring thaw is upon us, and parched western states will be watching closely as snows melt and rivers rise. Fancy satellites monitor water levels in the biggest rivers, but they don't spot the smaller streams and waterways that feed into them. Now, some Colorado scientists have hit on a new way of tracking those smaller streams — inspired, by Pokemon.

Before we get to Pokemon, let's start with the problem. And to understand the problem, we have to start on the side of a canyon road outside Fort Collins, Colo. Hydrologists Stephanie Kampf and Kira Puntenney-Desmond, both with Colorado State University, pull over to take a look at a stream.

"This one's fascinating," says Puntenney-Desmond, pointing to a stream that, from afar, didn't look like much at all. "It's always worth getting out of the car because if you listen really quietly, you can hear the stream flowing."

She bolts out of the car and across the street before squealing with excitement. "It's no longer frozen! The water is actively flowing," she says.

It was barely more than a wet ditch, but it was wet.

These hydrologists are all about the underdog streams — the ones you could step across without even jumping. They say it's the little tiny streams that are really exciting and important when it comes to forecasting water supply. And they're not alone.

"I started out looking at big rivers," says Tamlin Pavelsky, a hydrologist at the University of North Carolina, Chapel Hill. "But if I wanted to try to answer a lot of the questions that I had about big rivers I realized that I had to go back and look at the small streams to be able to answer them." 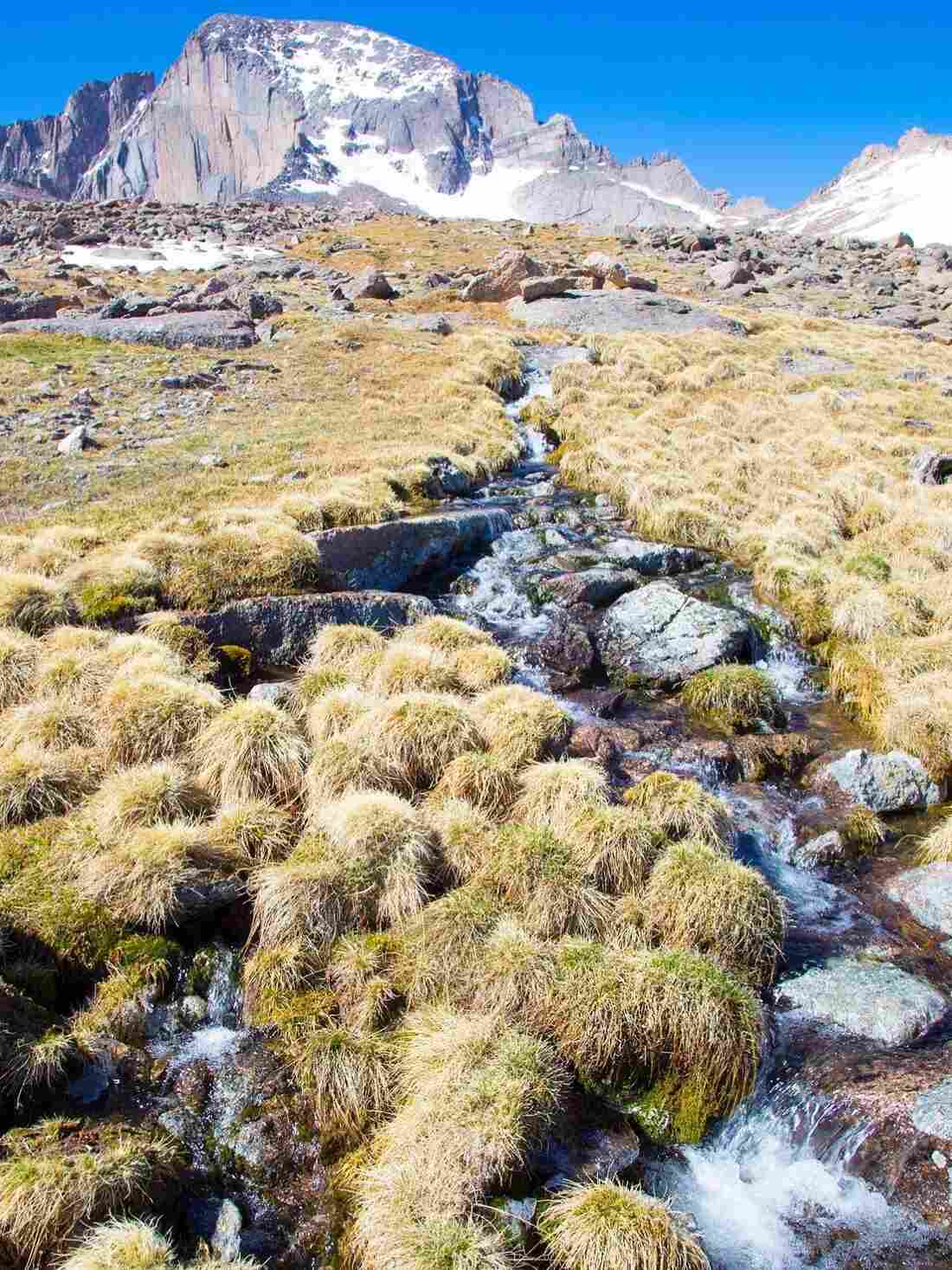 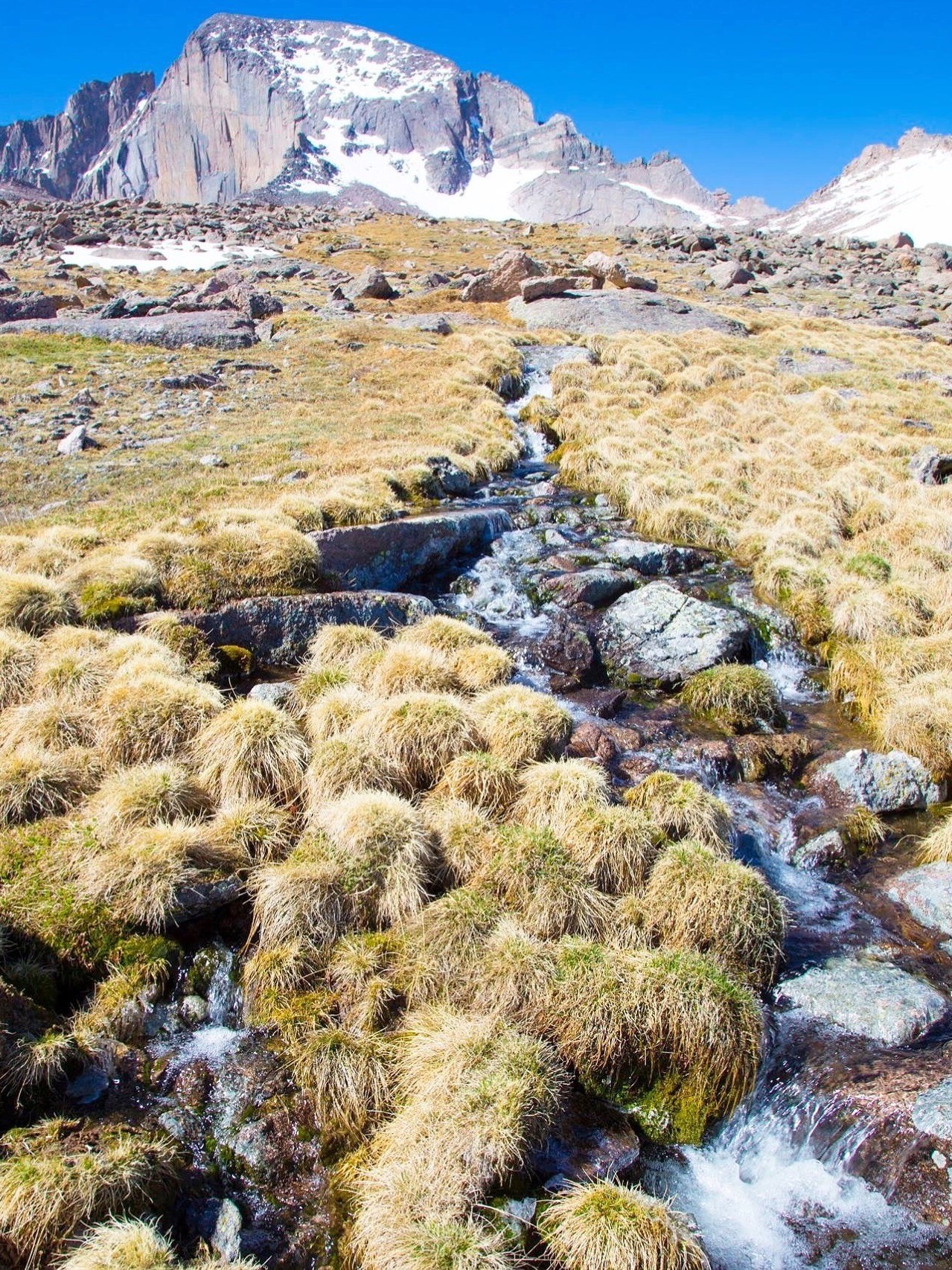 Pavelsky is a big river kind of guy, like wider-than-a-football-field big or see-it-from-space big. Even he says, "yes," those small-potato streams are really important, even if they're a little underwhelming in person.

"It is really unimpressive-looking in person," he says. "But if you think about the number of these streams there are across the country, it's staggering."

We have one Mississippi River, he says, but thousands — maybe millions — of tiny streams, and they're constantly turning off and on.

"For many processes, they actually dwarf something like the Mississippi in terms of their importance," he says.

But here's the thing: little streams are really difficult to track. You can't see them from satellites. They don't show up on most maps. When they do, the data are often wrong, especially after something like a wildfire or a flood.

For hydrologists like Stephanie Kampf, that was frustrating. How could they ever make water forecasts better if they didn't even know where the streams were?

But then, "Pokemon Go" entered the world, a smartphone game that led people to wander all around collecting imaginary creatures from everyday places.

"There [were] all these people walking around with mobile phones looking for Pokemons and we were trying to understand streams," says Kampf.

The hydrologists got an idea. "We thought, 'Wouldn't it be great if those people walking around were actually collecting data that would be useful?' " says Kampf.

So, they got funding from NASA and teamed up with a citizen science app called "CitSci" to start collecting those data. The project is called Stream Tracker, and they're recruiting anyone with eyeballs and legs to check in on small streams in their area and report back really basic information: Where is it? Is it flowing, dry or frozen? 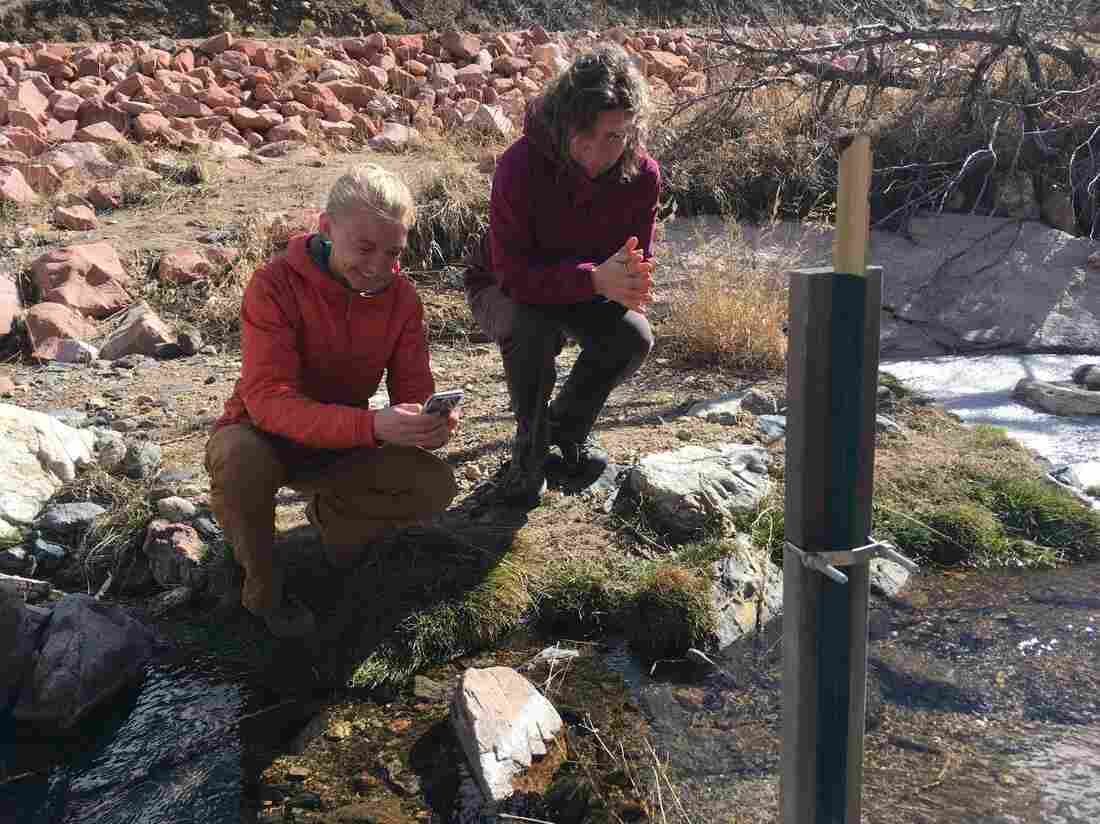 Kira Puntenney-Desmond, left, and Stephanie Kampf inspect the water level in a stream in Poudre Canyon, Colo., and record it on a smartphone app. Wildfires and flooding have reorganized area streams. Rae Ellen Bichell/KUNC hide caption 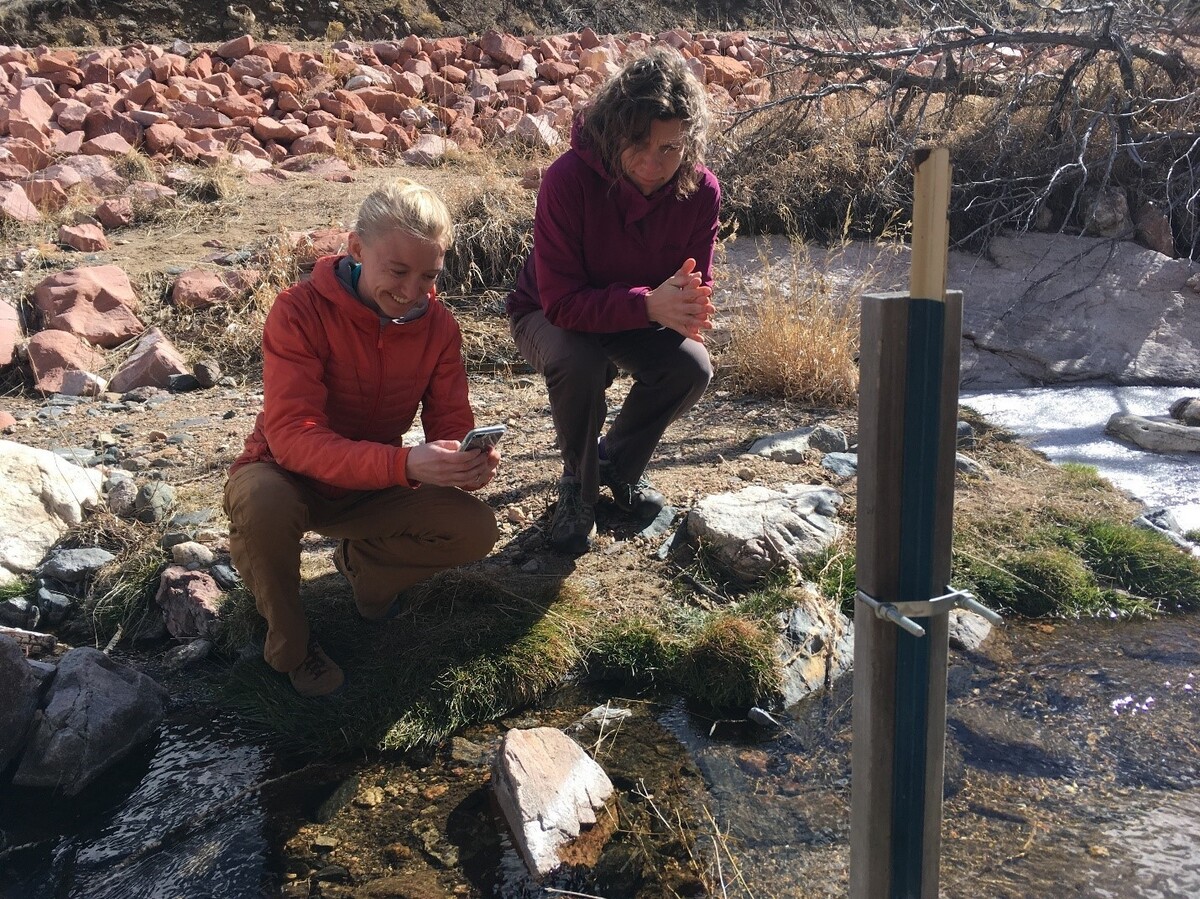 Kira Puntenney-Desmond, left, and Stephanie Kampf inspect the water level in a stream in Poudre Canyon, Colo., and record it on a smartphone app. Wildfires and flooding have reorganized area streams.

Less than a year into the project, they have about 80 people of all ages — schoolkids, hikers, retirees — monitoring streams in Colorado, Utah, Ohio and Arizona. And, of course, they'll keep checking in on their own streams near Fort Collins, Colo.

While the big-river scientists work on launching satellites to keep an eye on the world's giant rivers and lakes, the best monitoring device for these little streams remains people, walking around on the ground looking for streams instead of Pokemon — especially in dry states like this one.

"This is my favorite Stream Tracker point," says Puntenney-Desmond as she approaches a stream bed winding between two houses. "It's always a surprise. Is it flowing today or is it not?"

It was dry. But other ones should be thawing, and as Desmond-Puntenney puts it, "turning on" right about now, feeding into the reservoirs and rivers that will water thirsty cities in the months to come.

This story was produced by the Mountain West News Bureau, a collaboration between Wyoming Public Media, Boise State Public Radio in Idaho, Yellowstone Public Radio in Montana, KUER in Salt Lake City and KRCC and KUNC in Colorado. You can join in on tracking streams by going to www.streamtracker.org.