Accessibility links
The 'Scandal' Finale: Last Shocks, Loose Ends And Lots Of Lust After seven seasons, Shonda Rhimes' roller-coaster of a drama screeches to a final halt as Olivia and the team try to get out of one last scrape and Olivia tries to make it to Vermont. 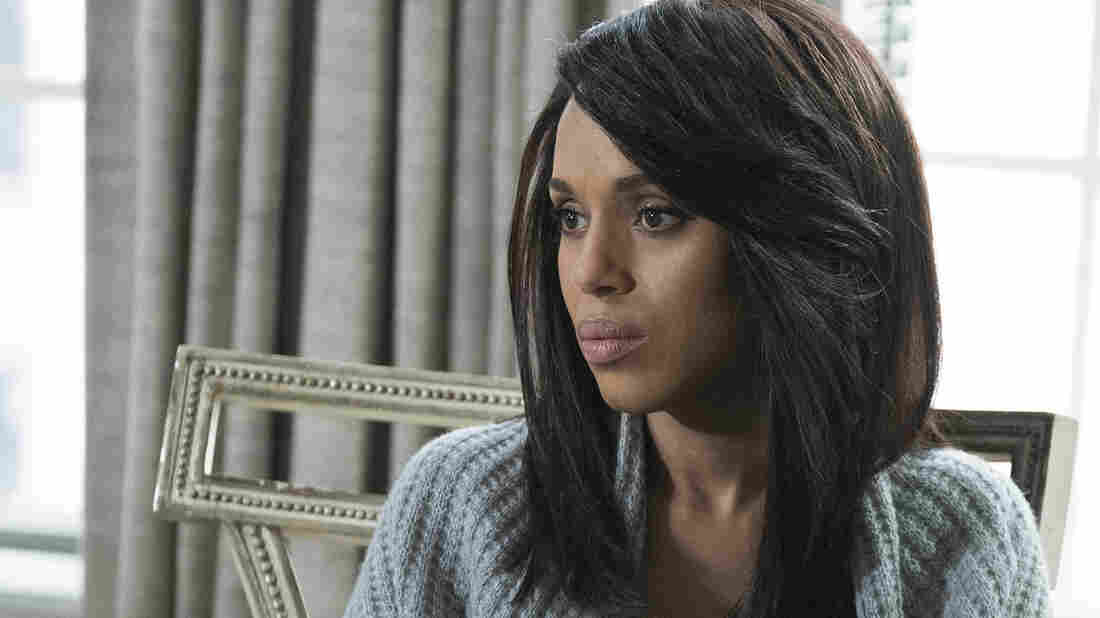 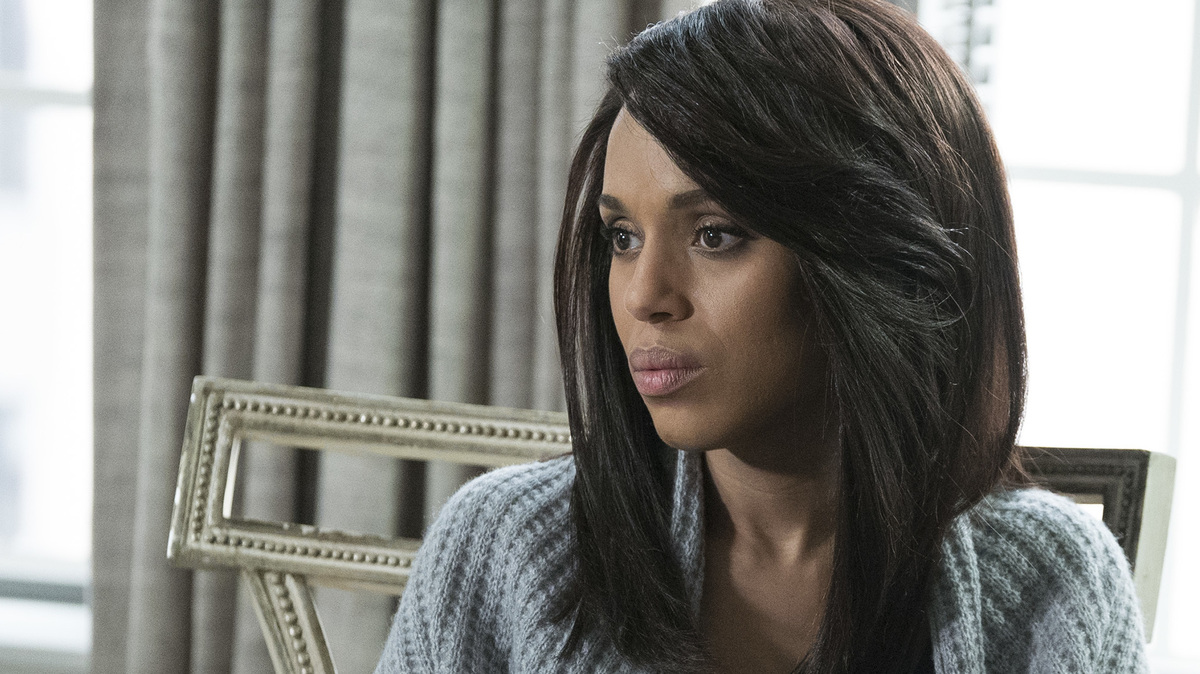 The basic rule of Scandal for seven seasons, under its creator, Shonda Rhimes, has been that absolutely anything can happen, but very little of it really matters.

The protagonist, Olivia Pope, beat a guy to death with a chair. Fitz, her romantic hero, killed an old lady with his bare hands for his own benefit. An election was stolen. The vice president hijacked his own plane and framed the president. One character (Huck) tried to preserve another character's (Quinn's) goodness by torturing her (specifically by pulling her teeth). A lady was stabbed with a dinosaur tooth. Olivia bombed a plane and killed several innocent people to preserve power. She also broke up multiple couples because their happiness was inconvenient for her. She convinced a widow who had just been elected vice president after arranging her husband's assassination to commit suicide.

But strangely, life carried on much as it had before for our ... heroes? Olivia eventually retired from her business to run a sort of all-inclusive evil services company known as B613 (we'll get back to it), but before that, Fitz served out his term and passed power to his ex-wife, and Olivia remained adjacent to the White House for years. At any given moment in Scandal, you can catch up by watching about three episodes, because that's about as long as the show's memory often seems to be (or needs to be). It's the rare show where you could turn to a friend and say, "Remember when she killed a guy with a chair?" and your friend might say, "Ohhhhh, yeah, I forgot that."

All you really need to know about where we stood at the beginning of Thursday night's series finale is that Olivia had publicly revealed the existence of the shadow-government-slash-secret-intelligence-ish-bad-guy-organization known as B613 that's been the show's Big Bad for several seasons. (What was B612? I'm guessing it was a military marching band or maybe a secret hugging club.) It was very important for Liv to prove B613 really existed so she could bring down the bad guys and save the country, but to explain why, you'd need 80 more paragraphs and almost as much wine as Olivia herself drinks.

Which is a lot.

In order to prove the existence of B613, Olivia's entire team (Huck, Abby, Quinn ... Sleepy, Sneezy?) needed to come together and admit all of the terrible, evil, often criminal things they had done. As it happened, their morally compromised actions were so thoroughly entwined with B613's willfully evil actions that there was no way to take down the real bad guys and stay clean themselves. As you might have read in your Big Book Of Sayings, they have been lying down with dogs since 2012, and now they have many, many fleas. Really the biggest fleas. The most beautiful fleas.

Some powerful Washingtonians, including the two final bad guys to emerge in the show's end game, Cyrus and Jake, were not happy at all that Olivia's team had fueled the story of Bad Guys Unlimited to Sally, a cable news host who addresses her audience as "lovers of liberty" or just "lovers," and who grows less implausible by the day as she does her impression of a scandalized Southern grandmother crossed with a scandalized Northern gossip columnist. Also, Fitz and Olivia had gone back to sleeping together for reasons that are just as baffling as they've always been. (Since he left office, it's been even harder to understand why this show needs Fitz. It doesn't need Fitz. Nobody needs Fitz. Even Fitz doesn't need Fitz. Go get a poorly produced podcast and fade into obscurity, Fitz. Also, stop being named "Fitz." It sounds like the noise a SodaStream makes when you make bubbly water.)

So. To recap: The final season of Scandal has been about the need for people who are greedy and dishonest and power-hungry to nonetheless draw a line and not become complicit with evil if the country is to survive, even if it means they will be ruined on account of the parts where they were greedy and dishonest and power-hungry. It's about sacrifice for your country, weirdly enough, after all the murders and teeth (dino and human).

How did it end?

The last episode was, if anything, a bit anticlimactic. The problem with making every episode seem like it has to be the last stop on a train to Bonkersville is that you don't leave yourself anywhere to go. This is a show that already showed a woman eating her own wrist until it was so bloody they let her out of jail. What wouldn't feel anticlimactic?

In many ways, this felt like an episode of Scandal, just like others that have seemed like huge reversals and later amounted to less than met the eye. There was a patented Scandal "everything is different now!" moment when Olivia's father, Rowan, showed up to testify to Congress that he was indeed the mastermind of B613 — that for years, he'd been pulling the strings behind the scenes, choosing presidents and wars, running everything while they went about their pantomime of power. Joe Morton, who plays Rowan, delivered a final monologue that underscored how much frustration with racism has always played into Rowan's maneuvering, just as it's played into how he fathers Olivia.

Honestly, though, if this were not the series finale, it's nothing they couldn't have bypassed.

4 Reasons Why 'Scandal' Is A Telenovela. And A Good One

There was an exception to the Just Another Episode feel of the finale, in that it brought a final sacrifice: the sweet, mostly decent David Rosen, too good for the world of Scandal. David stood up to NSA chief and Bad Guy Jake and survived, only to be murdered by vice president and Bad Guy Cyrus, who had been goaded by Jake into doing his own dirty work for once. While it's probably honest to acknowledge that David was easy prey for these people who were so much more wicked than he was, to lose him does feel like the rest of the story was just rearranging monsters on the deck of the Titanic. Scandal killed its last character with a real and reliable conscience, and there was barely time to mourn him.

It all worked out in the end ... sort of. Bad Guy Jake was blamed for everything and ended up in jail. Everyone else was exonerated for some reason, as if discovering a secret government agency that's been operating illegally for decades would end in one guy getting arrested and then everyone shrugging and going off to Pizza Hut for lunch.

But the priority of the Scandal finale wasn't the B613 stuff. It was what it was always destined to be: bringing Fitz and Olivia their happy ending. Off to Vermont where you've always dreamed of going, you murderers! Enjoy your jam-making, you election-fixers, you plane-blower-uppers! I've never doubted that this would be the backbone of the ending, despite how much some viewers (ME ME I ADMIT IT'S ME ME ME) don't care about their love story one bit. This is the predetermined end for them, and yet it is only the beginning, as their texts to each other undoubtedly say. Olivia left the White House, Fitz picked her up in an SUV, and they presumably drove off to have enormous amounts of sex for several years until they finally went out for breakfast, emaciated but finally otherwise sated.

Notes On A 'Scandal': Fitz Is The Most Dumpable Man On Television

It would have been a mistake to expect Scandal to stop being an amoral show now. It's always been an amoral show, and it ended as one. Most of the people who have committed horrible acts over the last seven seasons entirely escaped consequences. They got happy endings. Olivia now apparently has pleasant dinners with her father, despite all the innocent people he has killed and the misery he has spread. It's all water under the bridge now, all those grand jurors and old girlfriends and inconvenient witnesses.

There was no justice. There was no comeuppance. It looked like there might be a message somewhere about paying the costs of your own bad acts to save the country, but there wasn't. Other than Jake, who took the fall for everything, these people all walked away clean, despite many of them having done enough to earn life in prison. Olivia didn't stick around to help clean up the mess she'd made. She didn't really come clean about what she'd done, not publicly. One of her boyfriends took the fall for her, and the other one took her away in a black SUV. She wore a great white jacket, though.

And Abby, David's true love, whose life Olivia pretty thoroughly ruined in about six different ways, ended up at the cemetery putting a rock on David's headstone. And somehow she seemed at peace and perfectly content with everything.

She knows that it's all OK, because Olivia and Fitz really, really love each other. Vermont and everything.