Accessibility links
Columbine Shooting: 19 Years Ago Felt Like A Galvanizing Moment For Gun Control The weeks after the Columbine High School's deadly shooting saw waves of activism from students and parents concerned about gun access. 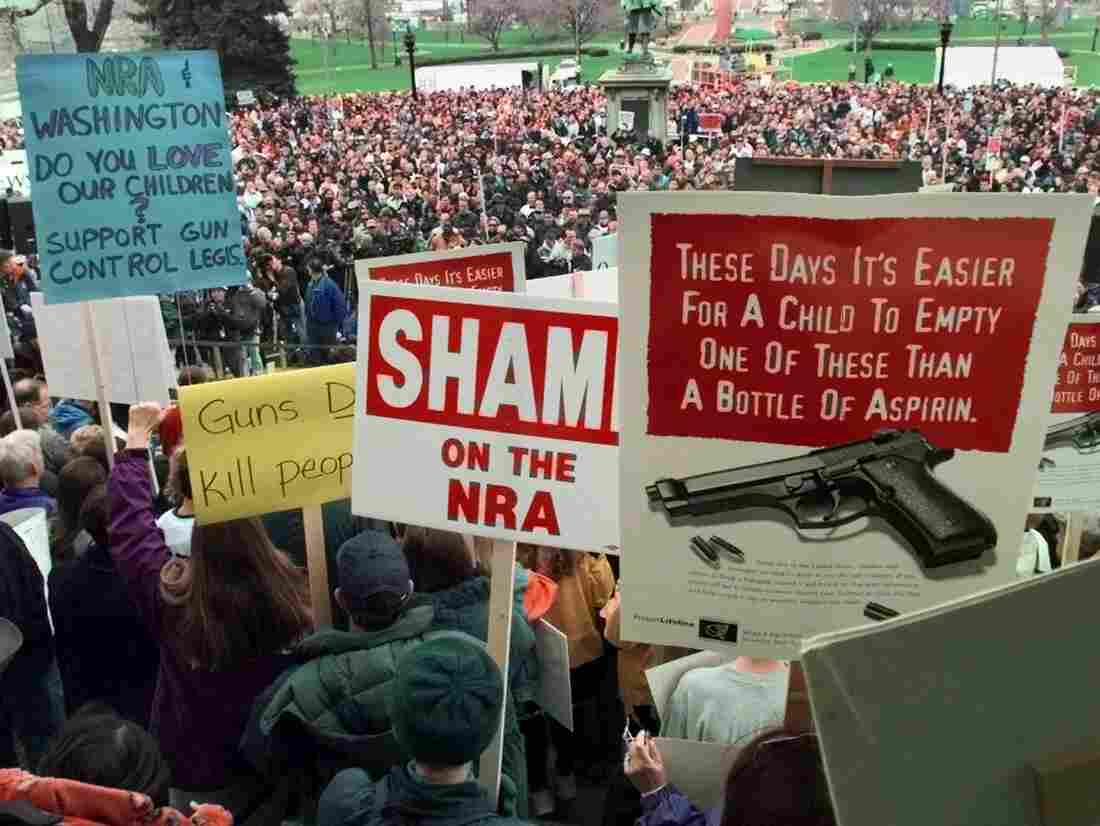 Demonstrators gathered on the Colorado State Capitol grounds in Denver on May 1, 1999, days after the Columbine High School shooting to protest the National Rifle Association's annual meeting in Denver. Eric Gay/AP hide caption 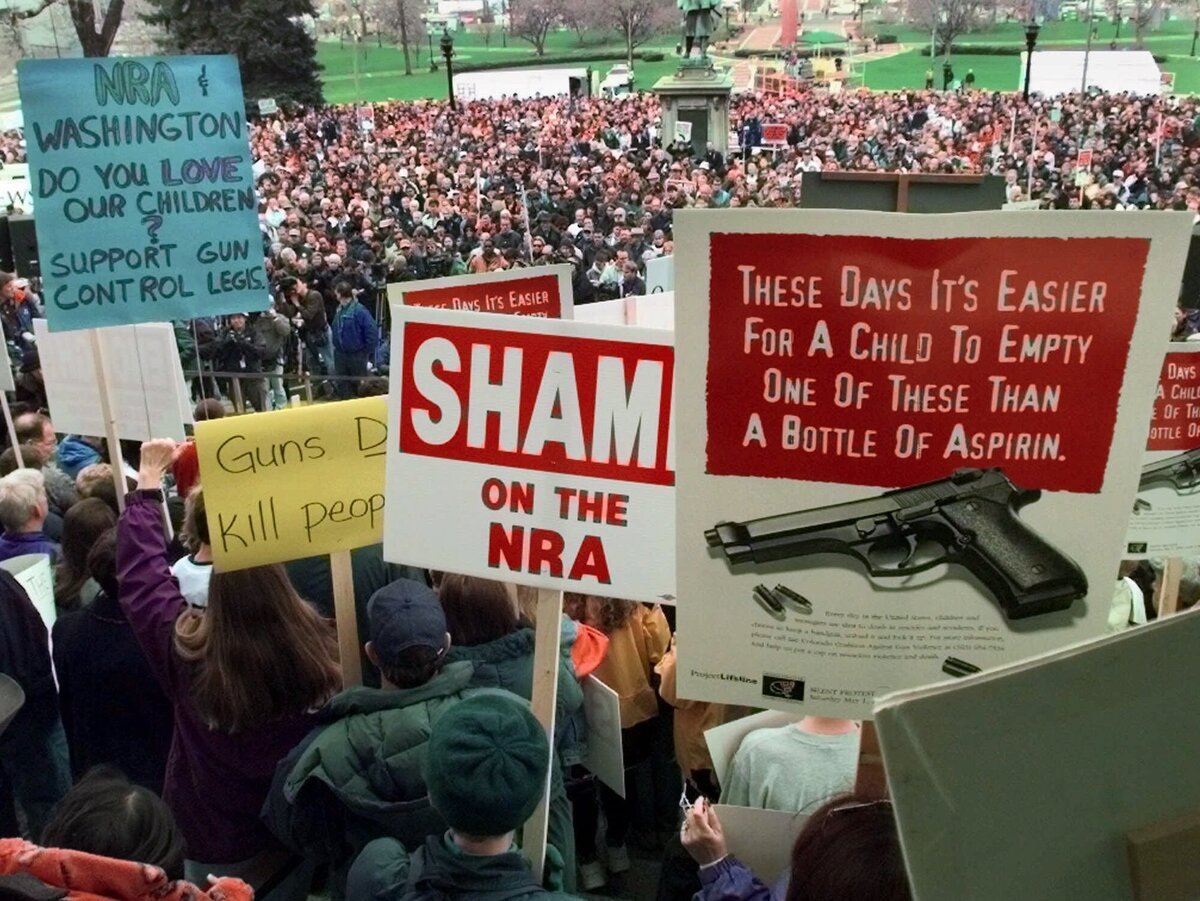 Demonstrators gathered on the Colorado State Capitol grounds in Denver on May 1, 1999, days after the Columbine High School shooting to protest the National Rifle Association's annual meeting in Denver.

On May 1, 1999, Tom Mauser stood with a protest sign, alongside thousands of others, at the National Rifle Association's yearly convention in downtown Denver. It was a transformative day for Mauser. Just days earlier, his son Daniel was among the students killed at Columbine High School in Littleton, Colo.

The convention was scheduled to begin just after the shocking April 20 mass shooting in which two students killed 13 before killing themselves.

Denver Mayor Wellington Webb and others had asked the NRA not to come, but the convention took place anyway. According to reports at the time, the group held a moment of silence for the victims. Actor and activist Charlton Heston, NRA president at the time, told the crowd that there is "no more precious inheritance" than the Second Amendment.

Mauser remembers that day as the point when he realized he was in the fight for gun control.

Nineteen years later, he still is.

For Mauser, too little has changed since Columbine. But the activism that has sprung up since the February shooting at Marjory Stoneman Douglas High School in Parkland, Fla., has given him hope.

There were many parallels drawn between the Colorado shooting and Parkland.

After the February shooting in Florida, administrators from Stoneman Douglas High School turned to Frank DeAngelis, Columbine's retired principal, for advice on what to do next. Columbine survivors spoke out both in favor of and against the national gun debate reignited by Parkland. Darrell Scott, who lost his daughter at the Littleton school, was invited to the White House for a listening session on gun violence.

And there were the new student activists. Mauser spoke at the March for Our Lives rally in Denver. 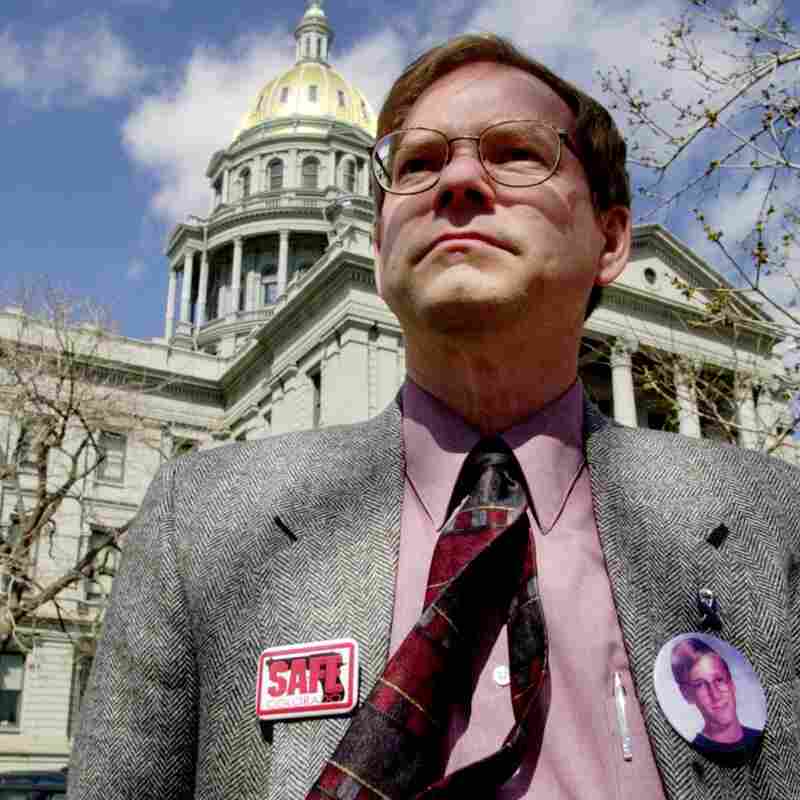 Tom Mauser in April 2000, wearing a button with a picture of his late son, Daniel on it, front of the state Capitol in Denver. Ed Andrieski/AP hide caption

"It's time for a real change, and it's time for you to make clear to politicians that if they have an 'A' rating from the NRA, they get an 'F' and a 'no' vote from you," Mauser told the Civic Center park crowd back in March.

The rally and the activism since the shooting at Stoneman Douglas High School feel like a watershed moment for Mauser. He works with Colorado Ceasefire, a gun violence prevention group created after Columbine. In 2000, they closed a loophole in state law that let people buy guns at gun shows without a background check. That is how shooters Dylan Klebold and Eric Harris got the weapons used at Columbine.

"I think you have the kids today saying, you know, these are things we read about in the history book," Mauser said. "And they're still happening, why is this still happening? We have to change this. Don't just live with it."

"They want to believe that things can get better"

There were kids in 1999 who wanted change too.

Ben Gelt was a senior at Denver's East High School at the time and was in philosophy class when news broke about Columbine. When Gelt's mother, a Denver City Council member, told him the NRA would be in town, he helped plan the protest and got kids to join — before there was social media.

"We got flyers and we'd ditch school and drove around the metro area," Gelt said. "Like there were a bunch of us and we drove around and just leafleted high schools."

He and a friend, David Winkler, organized a group of 100 students to travel to Washington to meet with President Bill Clinton later that year. Winkler spoke on national television from the White House.

"Young people here, are concerned about gun violence in America. And we will make our voices heard," Winkler said back in 1999. "We will not go away. We will be back next year, in greater numbers and from other states."

Even though Winkler and Gelt got national press attention and traveled across the U.S. to talk to students, Gelt said the activism after Parkland is larger and louder. Yet, not much has changed in the intervening years.

"That's part of what's so depressing about it," Gelt said. "And I think frankly, that's part of why people want it to be different, they want to believe that things can get better."

Colorado House Republican Leader Patrick Neville agrees that not enough has changed to protect students, though his concerns aren't for gun control. He is a survivor of the Columbine shooting and, for years, has fought for legislation that would allow teachers and school staff to be armed. His latest defeat came earlier this year. "I went from having my bill defeated in committee on a party-line vote, and then literally 12 hours later, I was meeting with the president," Neville said. "And was getting national news coverage talking about this issue, and it's getting a lot of people talking about it in an open way."

Today's Columbine High School students weren't alive when the attack happened. But 16-year-old Rachel Hill and Kaylee Tyner say they grew up in its shadow.

"This always affects all those students that go through that school after and everyone in the community," Tyner said.

The two current Columbine students are working with peers from Parkland to get young people to vote for tougher gun laws. Hill said their generation grew up with the active-shooter drills and lockdowns after Columbine. For her, it's not enough.

"Once you figure out how to prevent it from happening in the future instead of just making it harder for someone to shoot us while we're at school, I think that would make the biggest difference," Hill said.