Accessibility links
Students Walk Out Again To Protest Gun Violence Thousands of students are expected to walk out of school on Friday to protest school violence. It comes on the 19th anniversary of the Columbine shooting.

Thousands of students are expected to walk out of school on Friday to protest school violence. It comes on the 19th anniversary of the Columbine shooting.

Thousands of students are expected to walk out of their classrooms this morning in protest over gun violence. It's the third major student-led demonstrations since the shooting that killed 17 people at Marjory Stoneman Douglas High School in Parkland, Fla. That shooting sparked a national debate about school safety and changes to gun laws. Today marks 19 years since the mass shooting at Columbine High School in Littleton, Colo. The students who are protesting today won't remember Columbine because they weren't even born yet. NPR's David Schaper is following this story from Chicago and joins us now. So, David, what's this walkout today going to look like?

DAVID SCHAPER, BYLINE: Well, it depends on where you're at. The levels of participation are going to vary quite a bit. First of all, in suburban Denver, Columbine High School will be closed, as it has been every year since that shooting in 1999. And students there will participate in a day of service, as they have done in many years. It's become the tradition there. Elsewhere around the country, participation levels, as I said, is going to vary. There's not nearly as many schools here in the Chicago area that are actively participating as did so back on March 14. That was the event to honor the victims of the Parkland shooting, mostly. Some schools in this area are even warning students and parents that there may be disciplinary action for students who walk out today.

In the city itself, though, there are students at several area high schools who plan to walk out and meet up for a rally downtown later in the day. And I checked in with one elementary school that's taking part in its own way. This is Charles Henderson Elementary School in the Englewood neighborhood on the city's South Side. And these are students who go through those lockdown drills like everyone else, but a Parkland or a Sandy Hook-like shooting, that doesn't worry them much because their everyday reality is much more frightening.

DION MCGILL: The idea of walking to and from school and getting shot is much more prevalent in the minds of the kids I work with than someone actually coming into the school and shooting.

SCHAPER: That's Dion McGill. He's a former teacher who now works for the group Illinois Council Against Handgun Violence, and he implements school-based antiviolence programs for them. Over the past couple of years, he says there have been two students at Henderson who have been shot and killed. One was an eighth-grader who was walking home and shot and killed just a few blocks away. The other was a sixth-grader shot in a schoolyard on a Saturday while hanging out with friends.

So today, students in fourth through eighth grades at Henderson Elementary will participate in a neighborhood march and a rally against gun violence. And this is something they've done before, after shootings in the neighborhood in the past. That's taking place at 10 o'clock today, just like all the other marches and rallies around the country, and it will be followed by a community town hall meeting.

MARTIN: So as you noted, students have walked out of school before, just earlier in March. And we saw pictures, photos of students from Parkland, Fla., in meetings with lawmakers, lobbying them one on one. Has any of this activism moved the needle, so to speak, when it comes to actually making change and bringing about legislation on gun violence?

SCHAPER: Well, I think one change that has been noticed is that this is getting a lot more attention. These students are getting noticed. They're getting those meetings, as you mentioned, on Capitol Hill and in state legislatures all around the country. There hasn't been movement much in the way of new laws, but some state legislatures have been taking action. Illinois is one of them, where lawmakers did pass a bill to license all gun dealers in the state. However, it was vetoed by the state's governor. There's an effort now to override that. There's momentum in other states, too.

But while there seems to be a lot of steam behind the movement here, there's a new poll out that we had out this week. The NPR/PBS/Marist poll shows that not even half of Americans say gun policy will be a major factor when they vote. Still, we are seeing this new generation of leaders emerging and making a strong case for change. 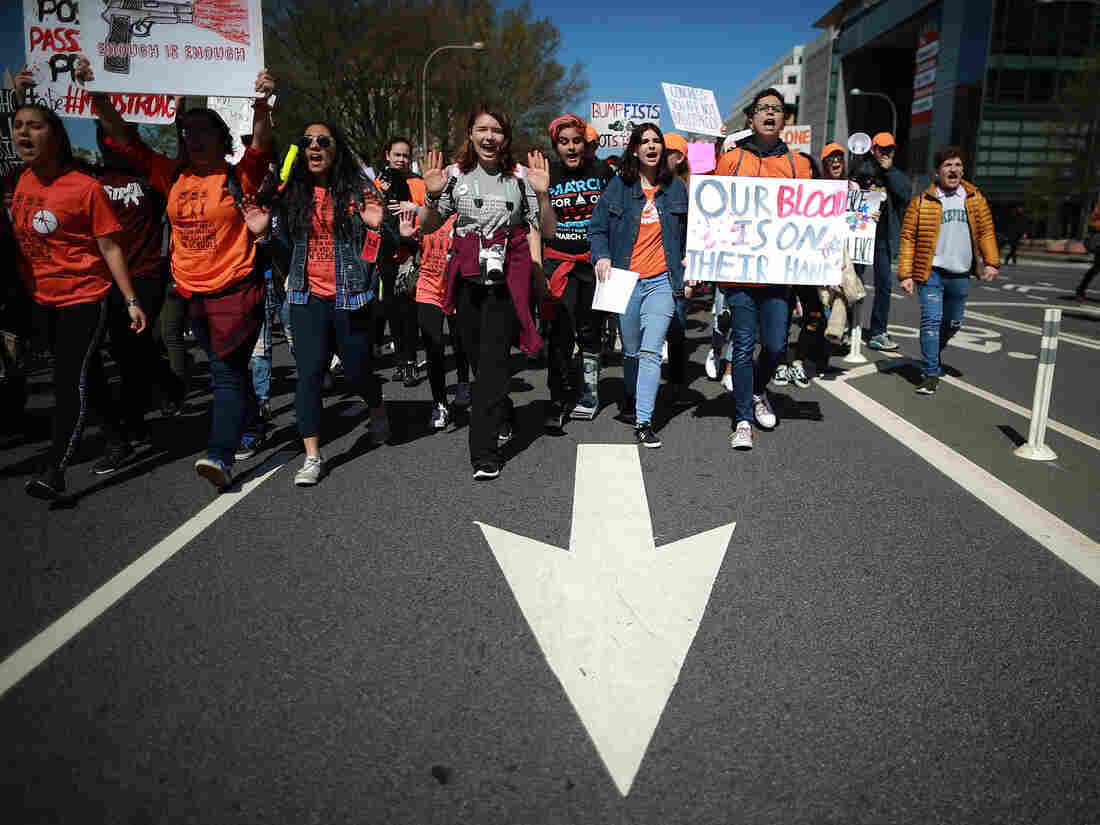 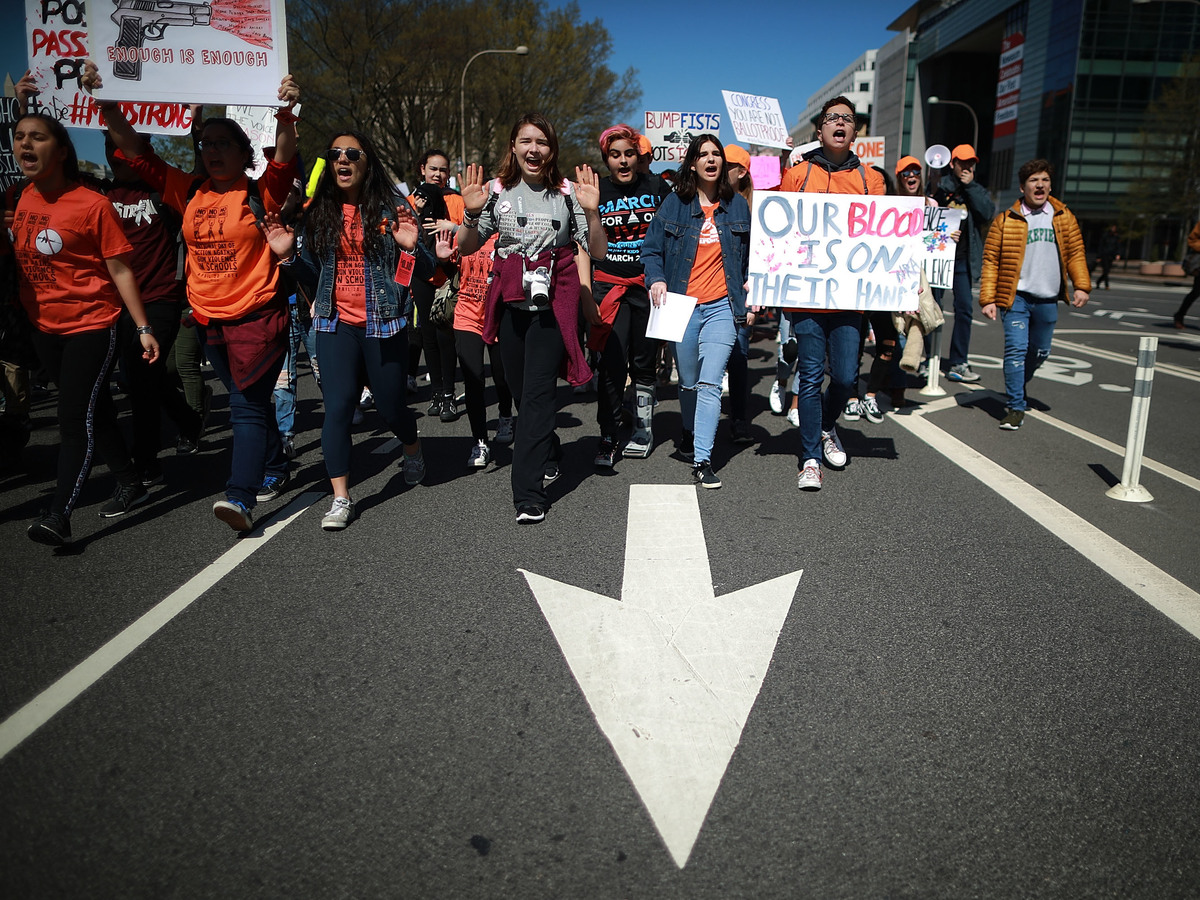 High school students march from the White House to the U.S. Capitol to call for stricter gun laws on Friday in Washington, D.C.

At schools across the country today, students are getting up from their desks and walking out when the clock strikes 10 a.m. They're participating in the National School Walkout, part of the movement that has taken hold among students to call for action to end gun violence.

It's also been a little more than two months since the shooting at Marjory Stoneman Douglas High School in Parkland, Fla.

The walkout begins at 10 a.m. in each time zone, and organizers said that over 2,600 walkouts were planned – at least one in each state. In some places, students faced potential disciplinary action for participating.

In Washington, D.C. students gathered in front of the White House with signs. And at 10 a.m., they began the walkout with 19 minutes of silence, in remembrance of the Columbine massacre.

Then, with chants against the National Rifle Association, students began marching to the U.S. Capitol.

Student protestors chant “Not one more” and “End gun violence” as they make their way down 15th St. toward the Capitol. #NationalSchoolWalkout pic.twitter.com/JIL2K13mhz

Student Noor Mobarek created a “non-comprehensive” list of 197 names of all the people killed by guns in schools since Columbine. #NationalSchoolWalkout pic.twitter.com/Xftw3FUs2C

The Day of Action marking the 19th anniversary of the Columbine School shooting began w a “die-in.” Students as young as 11 are flooding into Washington Square Park chanting, “Hey, hey, ho, ho, the NRA has got to go.” The organizers are a group of about 40 high schoolers. @wnyc pic.twitter.com/ZaAXdrsK2Z

Students from across NYC are walking out if school to join in a demonstration at Washington Square Park that’s entirely student organized. pic.twitter.com/QZvFi2Yqro

In Nashville, Tenn., students carried signs and marched to the city's Public Square, near that state's capitol.

Chants and songs, en route to a rally at Public Square. pic.twitter.com/LqJOoVlhNF

“We’re here today because we were scared – but we’ve decided that is over.” pic.twitter.com/9YTo8jcFUF

At Butler High School in Matthews, N.C., a suburb of Charlotte, students gathered in the bleachers.

Here’s the crowd at Butler High. Student walked out of first period at 10 a.m., read the names of the Columbine victims, and held a moment of silence pic.twitter.com/TuKtZpKmPh

In Pittsburgh, students stood in silence in the city's Market Square.

Pittsburgh CAPA students standing in silence in Market Square on #NationalWalkoutDay. They stood for 13 minutes on the 19th anniversary of the Columbine shootings in memory of the 13 people who died there. pic.twitter.com/64L2szMTie

On Friday morning, Forest High School in Ocala, Fla., was placed on lockdown after a student there was shot in the ankle. Students there had been expected to take part in the walkout, but a school board member told CNN that the walkouts had been canceled district-wide after the incident.

At Alpine High School in West Texas, a small group of students took part in the walkout. The school was the site of a shooting in 2016, in which a freshman girl shot another student before turning the gun on herself.

Alpine students who participated in the walkout without being signed out by a parents "are facing 3 days of DAEP - a form of suspension - as well as losing National Honor Society status," reports Marfa Public Radio's Sally Beauvais.

At Alpine High - a school with a population of almost 300 - a handful of students have joined the #NationalSchoolWalkout pic.twitter.com/YoDV2Qc7mm

One Alpine High student protesting today is dressed as Wonder Woman. Her sign: “If the adults won’t save us, we’ll be our own heroes” pic.twitter.com/4tzVvlzs06