Accessibility links
'How To Suppress Women's Writing:' Three Decades Old And Still Sadly Relevant This collection of essays by novelist and scholar Joanna Russ was first published in 1983 — but it reads as if it might've come out last week. "Get angry; then get a reading list," says our critic. 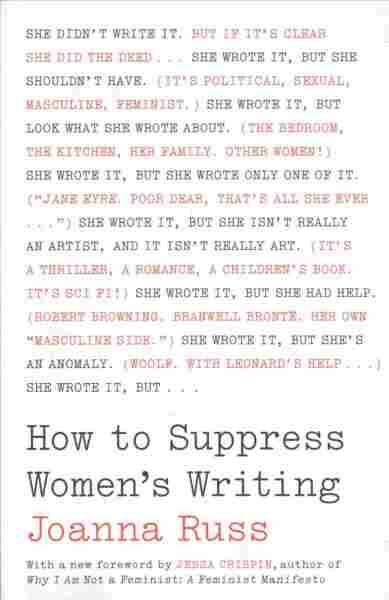 How to Suppress Women's Writing

by Joanna Russ and Jessa Crispin

In January, Ursula K. Le Guin died. Her Washington Post obituary is glowing; it notes that The Left Hand of Darkness "was cited by literary critic Harold Bloom in The Western Canon, his overview of classic literature, and paved the way for Ms. Le Guin's broader acceptance." It also, reverentially, identifies her as the "grande dame" of science fiction.

Joanna Russ would probably have something to say about that phrase.

How to Suppress Women's Writing — published in 1983, just reprinted — is startlingly slim for the amount of work it does, nimbly drawing disparate sources into an outline of the ways the literary establishment has rejected a canon of women's writing. (They include She didn't write it; she did but she shouldn't have; and she is not really she [an artist] and it is not really it [serious, of the right genre, aesthetically sound, important,etc.] so how could "she" have written "it"?)

Russ' writing is sharp and threaded with dry humor. But it's still heavy that this 35-year-old argument feels, often, as if it has moved untouched through time into a stagnant, messy present. Partially, that's because Russ cuts into such fundamental forces that sea changes would be required to reverse them; she gathers several centuries of examples. But it's not particularly heartening that this rundown of an establishment that dismisses, tokenizes, and marginalizes people from "the 'wrong' groups (sex, color, class)" when they "audacify themselves past all the informal prohibitions" to make art still has such clear and present relevance. (Among other things, she marks the "Grande Dame" as a product of masculine expectations of acceptable literary womanhood; "A woman did not write this because the woman who wrote it is more than a woman." Her example? A Samuel R. Delany anecdote in which a publisher tells him women don't sell ... except Ursula Le Guin, to whom the publisher refers with masculine pronouns as well as feminine.)

Eventually one gets the sense of being drowned in an hourglass where none of the sand has moved. There are Twitter-ready warnings against bad-faith actors for whom "each supposed case of sexism, racism, or class disadvantage becomes a matter of personal enmity here or chance there." After a fellow faculty member — a white woman — cuts James Baldwin from a novel course, Russ considers how "one cannot teach Baldwin's work without dealing with American racism and homophobia," so it's easier to dismiss him "rather than confronting one's own fear and discomfort." (Reviewing 2017 Baldwin documentary I Am Not Your Negro, A.O. Scott leads with a note from a reader: "Since when is everything about race?" And Russ's description of her colleagues' incomprehension when confronted with a student story about a "female protagonist lying in bed next to her sleeping husband, wishing she had the courage to hit him over the head with a frying pan" crisply foretells much of the uproar around "Cat Person."

This is a revelatory text for the first-timer (how I wish this had defied the odds Russ describes and been part of my English curriculum), but still thoughtful and canny enough to be relevant to a re-reader. Russ's plaiting of particulars makes a vindicating case: What the powerful fear, they will vilify; what they cannot understand, they will dismiss. These cantos are familiar, but they can be so slippery that the collected evidence is still eye-opening: Just look at French sci-fi author Gérard Klein, who "attributes LeGuin's [sic] artistic success to her nurturant qualities ... her art is the product of 'a happily resolved childhood, an active feminine genitality, and her intellectual indebtedness to her historian husband.'"

... this 35-year-old argument feels, often, as if it has moved untouched through time into a stagnant, messy present.

It's hard not to get freshly angry at the status quo, reading this. But amid the statistics and the sort of historical pull quotes you'll want to read out loud to horrified friends, Russ is also defying a literary tradition that, she points out again and again, wants to forget that women write. In so doing, she deliberately creates a legacy of women writers who came before. Well, white women. Russ mentions a few writers of color in the essay proper, and includes more in her Afterword, but this is a very white family tree. (It's one of the ways the book shows its age; another is the way any genderqueerness is reduced to sexual preferences, which amid so much far-seeing commentary feels quaintly second-wave.)

And despite how much there is to be angry about, How to Suppress Women's Writing is shot through with hope. There's the energy of a secret shared in "the rocking and cracking of the book as the inadequate form strains or even collapses." And beneath every denial of agency, there's the obvious truth: For hundreds of years, despite those odds against them, the "wrong" writers still manage to write. Likely it won't be remembered long enough or taken seriously enough, but to read this book is to admire this buried tradition, and realize how much there is to be discovered — and how there's no time like the present to look at the marginalized writers you might be missing. "Only on the margins does growth occur," Russ promises, like the guide in a story telling you how to defeat the dragon. Get angry; then get a reading list.