Accessibility links
A New Generation's Political Awakening Gun violence protests may be a pivotal moment for the generation coming up behind millennials. Events that occur when we're young can have an outsized impact on shaping our political outlook. 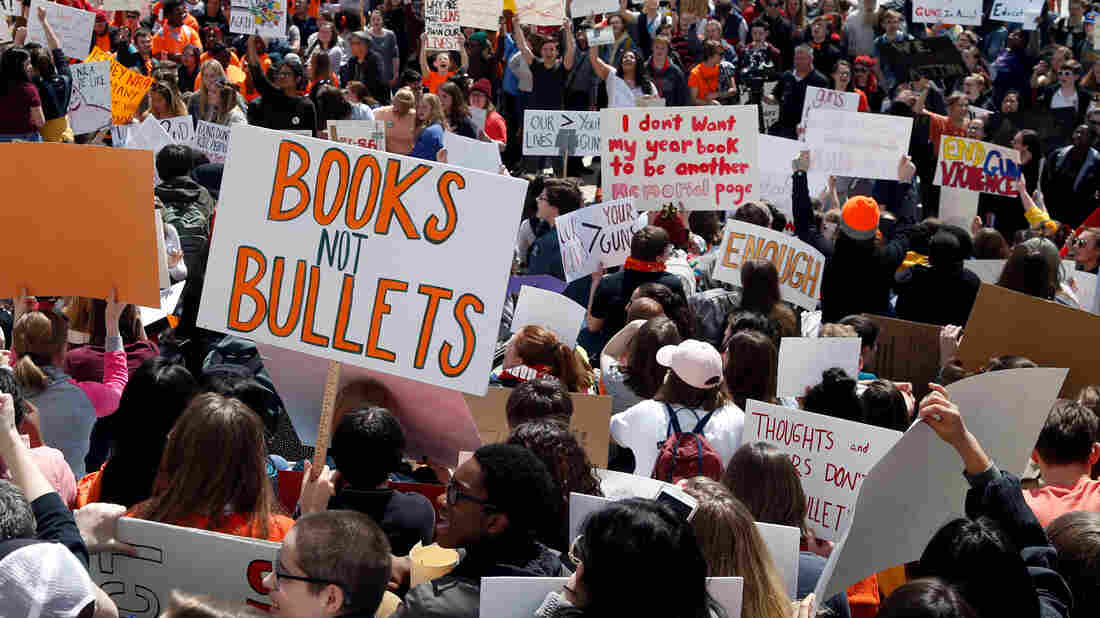 Hundreds of students gather at the State Capitol in St. Paul, Minn., on Friday to protest gun violence, part of a national high school walkout on the 19th anniversary of the Columbine High School shooting. Jim Mone/AP hide caption 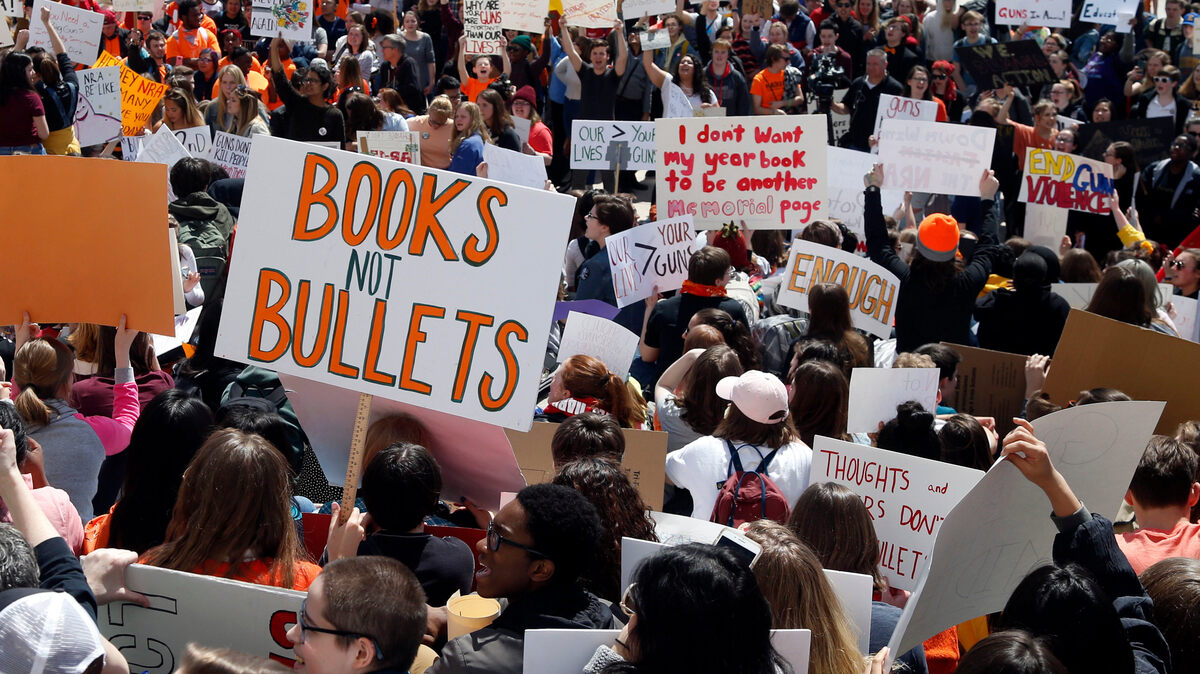 Hundreds of students gather at the State Capitol in St. Paul, Minn., on Friday to protest gun violence, part of a national high school walkout on the 19th anniversary of the Columbine High School shooting.

Emily Nakano began doing lockdown drills when she was in second grade.

"An alarm plays over the PA system, and we lock the door, turn off the lights and hide in a corner away from the window," she explained.

The high school senior from Illinois said she's grown up with a fear of school shootings in the back of her mind, even though she's not scared of guns. In fact, she's been around guns her entire life.

"The first time I was behind a gun I was maybe 3 or 4," said Nakano. "I remember early years going to the gun range with my family. I think the first time I shot totally independent was probably when I was 10 or 11."

So, even though Nakano says she shoots as a hobby, she participated in a walkout at her school earlier this year calling for stricter gun laws because she says something needs to change.

After the shooting in Parkland, Florida, students across the country began demanding new gun laws. They've held protests and rallies, culminating with the most recent school walkouts this past Friday, on the 19th anniversary of the Columbine school shooting.

These gun violence protests seem like a pivotal political moment for this new generation of soon-to-be-voters. They're often described as Generation Z, defined by the Pew Research Center as people born after 1996.

The question is how much of an impact the gun issue will have on them as they age into the electorate. Experts who study voting behavior say it's far too early to predict how much this moment will define Generation Z, but they point to the fact that events that occur when we're young tend to have an outsized impact on shaping our politics as we get older.

Nakano, 18, voted for the first time this past March in the Illinois primary. She chose the Democratic ballot even though she said she thought she was a Republican growing up.

"It's so extreme right now, I need to get involved," she said. Her vote was not strictly about guns or gun safety. But that was part of her decision.

"There definitely needs to be more done about gun laws," she said.

And Nakano's not alone: 64 percent of 18-29 year-olds want stricter gun laws, according to recent polling from the Harvard Institute of Politics. That's 15 points higher than after the 2012 Newtown, Conn., school shooting. 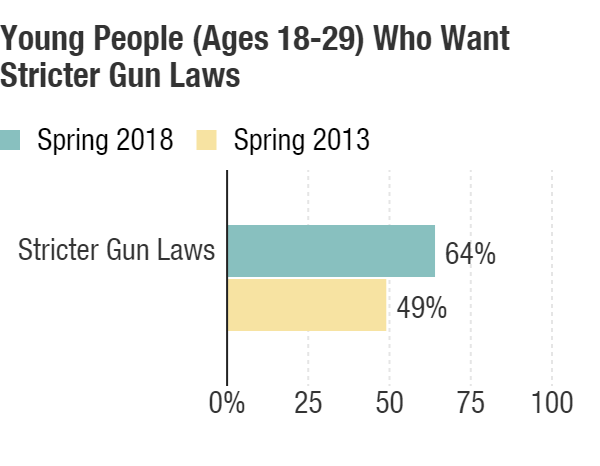 "Gun control is now the symbol of all things that young people really despise about Washington, D.C.," said John Della Volpe, director of polling at the Harvard Institute of Politics. He's been surveying young people since 2000.

His most recent poll found a clear increase in the number of people ages 18-29 who say they're "definitely voting" in the upcoming midterms; in fact, he said the results are the highest he's seen in the history of the Harvard poll. For some perspective, 37 percent said they would "definitely be voting" in 2018, compared to 23 percent who made the same statement in 2014.

And a vast majority of those likely voters – 77 percent – say gun control is an important factor in determining how they'll vote in the midterms. There is a distinction between Republicans and Democrats (and, of course, they may not all be on the same side of the gun control issue), but a majority of young people in both parties say it's important to their vote.

Della Volpe believes the uptick in enthusiasm for voting isn't solely about guns; it's a broader reaction to Donald Trump's election. "I think [it's] the culmination of a year or two years of frustration building up, symbolized by the tragic events in Parkland," he said.

Most Still Favor Stricter Gun Laws, But It's Fading As A 2018 Voting Issue

Many young people say they're now fearful about the future of America, and analysts say that could be significant in years to come because events that reshape our world when we're first becoming politically aware have an enormous impact on our political views as we get older.

"When you are young, your political views are being molded, and the things that really stick with you tend to have an echo over time," said Kristen Soltis Anderson, a GOP pollster and millennial who's studied her generation.

"I think of 9/11 as the beginning of the political awakening for millennials," she added. "You had this older piece of the millennial generation realizing we are not alone in the world. The world is a scary place."

The aftermath of 9/11 and the fallout from the Iraq War gave rise to Barack Obama. Anderson points out that Obama's election was pivotal for her fellow millennials, and they were a key part of his winning coalition.

But there are skeptics about the idea that experiencing events at the same time creates some sort of uniform political consciousness.

"Being alive at the same time doesn't give you an aligned consciousness," said Todd Gitlin, a sociologist who's written a number of books about the 1960s. "Hillary Clinton and Donald Trump belong to the same Baby Boom generation, what does that tell us."

"We can have more than two generations, politically speaking, co-existing," he explained. "They can share a birthday, and yet they can draw very different conclusions from events, depending on no small part where they're coming from, who they were before these events erupted."

He pointed to the civil rights movement.

"Your attitudes varied greatly as to whether you were black, or white, were you in the south or the north," he said, and as a result you inherited a different set of politics.

Gitlin acknowledges, though, that key events in history have a profound effect on people; he just doesn't think that effect is identical. In other words, it's possible to have two polar opposite political groups spring out of the same moment.

For instance, take the escalation of the Vietnam War, which he says undermined young people's confidence in a credible government.

Other analysts agree that the Vietnam War and the draft were some of the most crystallizing moments for young people who came of age in the '60s and early '70s. 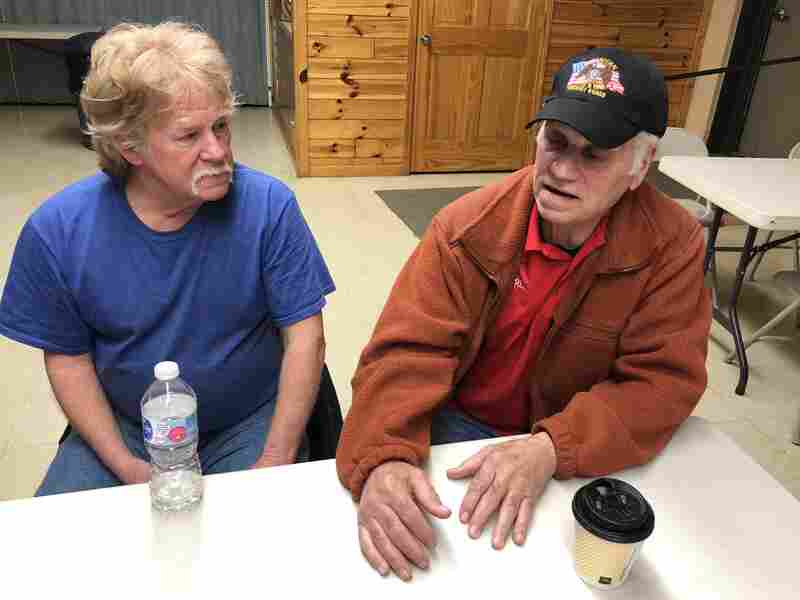 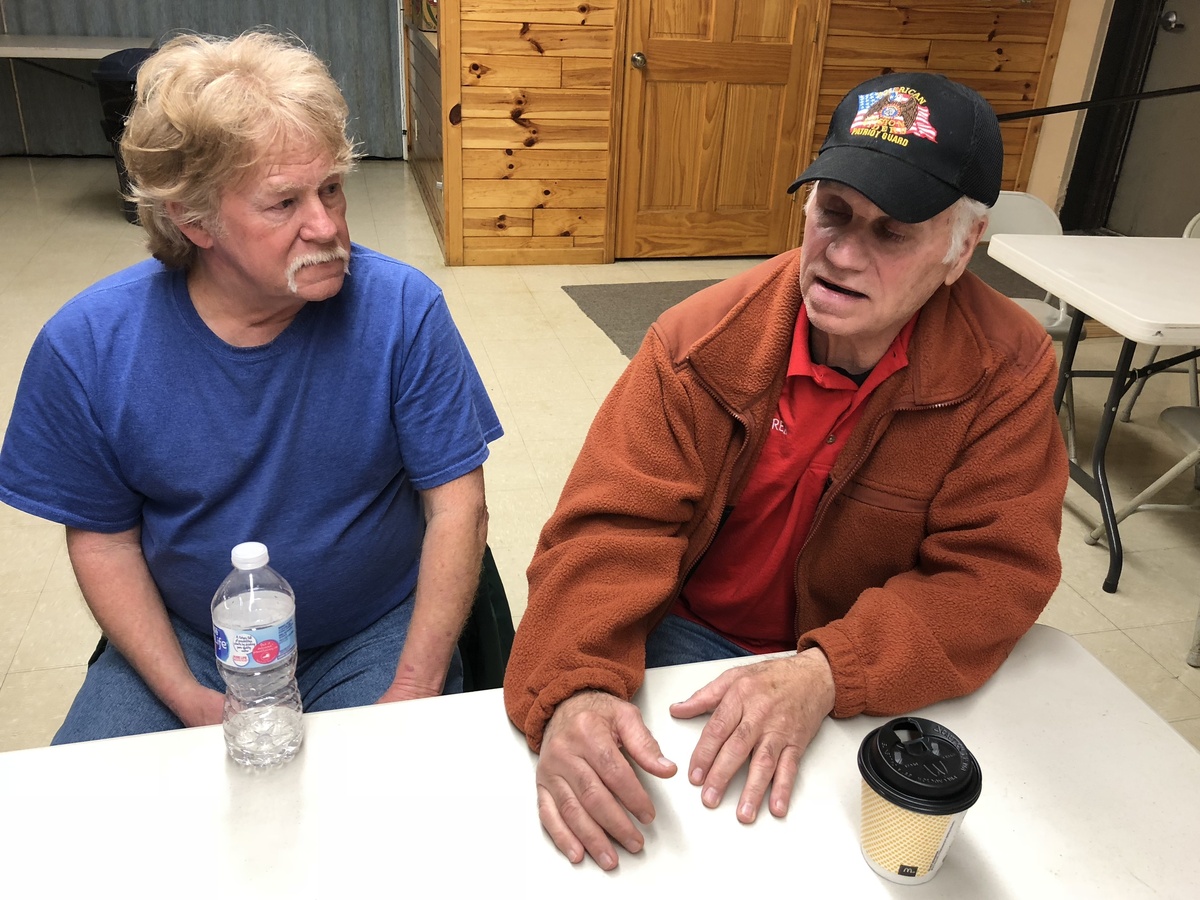 Dewey Chaney (left), a Democrat, chats with his buddy, and fellow veteran, Rex Eggleton, a Republican.

Dewey Chaney, a Vietnam War veteran from Charleston, W.Va., says he wasn't politically aware until he came home from the war. And he says the war itself didn't have the same impact on everybody.

"The war was very unpopular, half the country was for it, half was against it," he said. "It was hard hats versus hippies, and a lot of people were protesting, a lot of body bags coming home on the evening news."

"If it wasn't for the protests who how long we would have been there," he said.

He came to understand and appreciate the Vietnam War protesters.

And like those previous protesters, students today are hoping they can also bring about change. They've already begun trying by putting pressure on lawmakers and registering new voters over guns.