Accessibility links
Outrage Over Arrests At Philly Starbucks Fuels Twitter Conversations The arrests of two black men at a Philadelphia Starbucks sparked Twitter users to share their stories of how African-Americans are treated in predominantly white spaces. After two men were arrested at a Starbucks in Philadelphia, people are talking about how African-Americans are treated in public spaces. SAUL LOEB/Getty Images hide caption 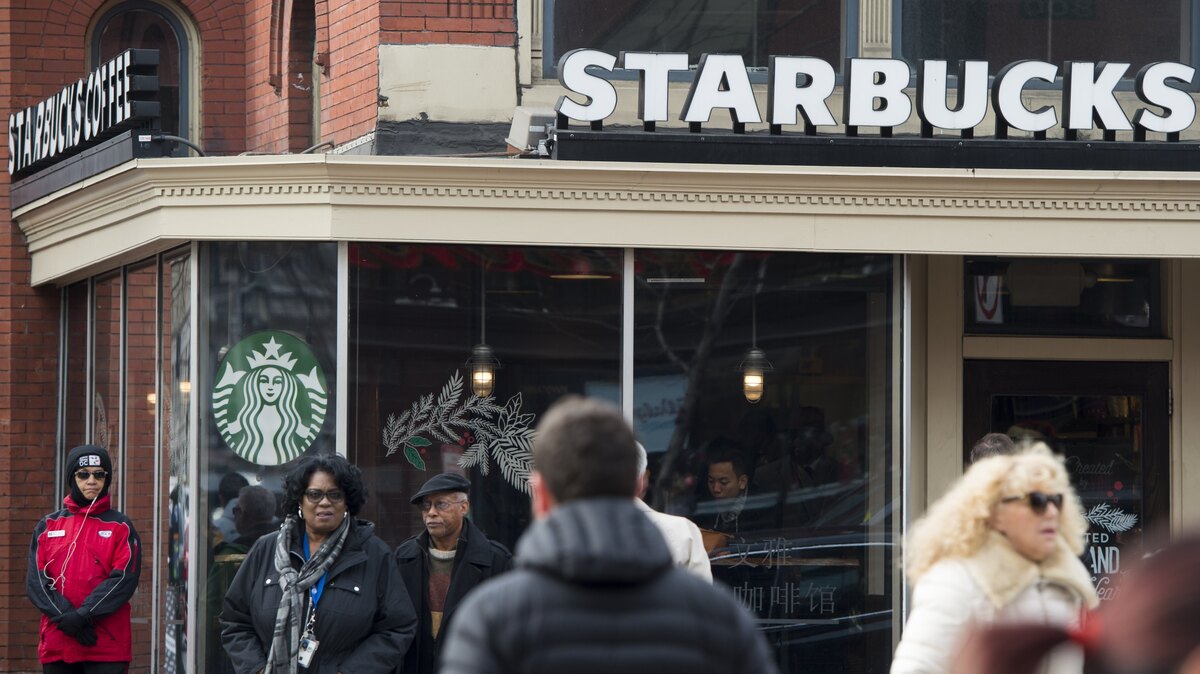 After two men were arrested at a Starbucks in Philadelphia, people are talking about how African-Americans are treated in public spaces.

The arrests of two black men waiting for a friend at a Philadelphia Starbucks continues to fuel conversations about implicit racial bias in public spaces. Many of those conversations begin with "I'm not surprised."

"When I have to move through predominately white spaces I'm always on alert and my anxiety is always high because I don't know what's going to happen at that moment," says Elon James White.

To think that this was an overreaction or that I’m just “super sensitive” is like wondering why somebody with burns all over their body doesn’t want to sit next to the blazing uncovered fire pit.

White is a writer, performer and founder of This Week in Blackness. He was one of the many people who used social media to share their experiences where everyday situations became suddenly menacing. Here are some more of those stories.

"I got on Twitter and I wanted people to understand because I was seeing and lot of white people who were expressing just shock. I need people to understand that it's the cumulative effect of knowing everywhere you go that you aren't welcome," says Ijeoma Oluo, a speaker and writer from Seattle. Oluo shared statistics about how black and brown youth are often criminalized from as early as preschool. Those statistics point to the issues behind a lot of these incidents, she says.

If you look at the statistics of how our black children are treated as early as preschool, they are treated as violent disruptions instead of as children.

Black children are 4 times more likely to be suspended from preschool as white children.

"I had visited with some middle school students in St. Louis, Mo., and these were black students and Hispanic students telling me about a field trip they had to take. And then they were talking about how on their way back they stopped at a subway and the teacher had handed out, you know, chips and drink to all of the kids, and then they each had like five dollars to go get a sandwich," Oluo says.

"And they went up they were getting a sandwich and the Lady at the counter decided to accuse one of the boys of stealing his bag of chips ... and she was threatening to call the police."

Even after the children's teacher approached the lady at the counter and vouched for him, she insisted that the boy had stolen the chips, Oluo says.

"They were saying even that this brand of chips wasn't even sold at this location," she says. "And she still didn't want to believe them. And I wanted to people to see that what happened at the Starbucks is part of this emergent pattern."

Shay Stewart Bouley from Maine is the executive director of Community Change and the creator of the blog Black Girl in Maine. She tweeted a story about an incident that happened to her while she was waiting for an Amtrak train. She was the only black person standing on the crowded platform, she says, and she jostled a white woman standing near her.

"She just looked over at me and gave me this nasty look," she says, "and it's 8-something in the morning and all I want to do is get on this train. And then she says out loud to her traveling companion 'this woman is in my space.'"

William Ketchum III is a journalist based in New York City. He tweeted that about a conversation that is had ubiquitously between parents and children in the black community about how to interact with police. His father had a similar conversation with him about visiting businesses.

If I'm at a coffee shop to work, I buy a drink even if I'm not thirsty. If I stop at a gas station to use the bathroom, I'll tell the person at the register, 'hey, I'm about to buy something in a moment, but where's your bathroom?' Then I buy the cheapest drinks/snacks I can find

Ketchum says he has spent a lot of money buying drinks or appliances that he didn't even want to ensure he wouldn't be perceived as a threat to a business.

It's similar to the way that he would speak to a police officer, he says.

"You tell him, 'OK, I'm reaching for my wallet. My wallet is in my back pocket. I'm going to reach in my back pocket now to get my wallet.' ... I guess you can say that it's paid off because I'm alive and I haven't been to jail."