Accessibility links
Mike Pompeo On Track For Confirmation For Secretary Of State The CIA director faces a narrow path through a closely divided Senate, but Republicans are confident he has the votes to win confirmation on the floor later this week. 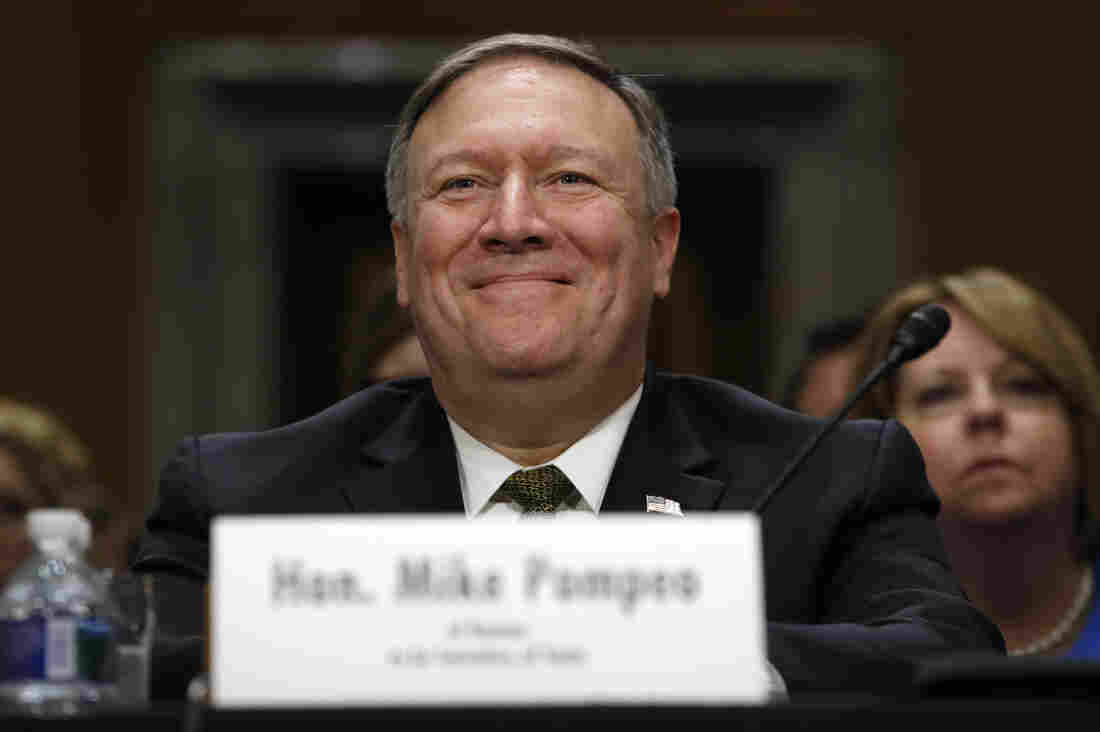 Secretary of State-designate Mike Pompeo smiles after his introduction before the Senate Foreign Relations Committee during a confirmation hearing on April 12 on Capitol Hill. Jacquelyn Martin/AP hide caption 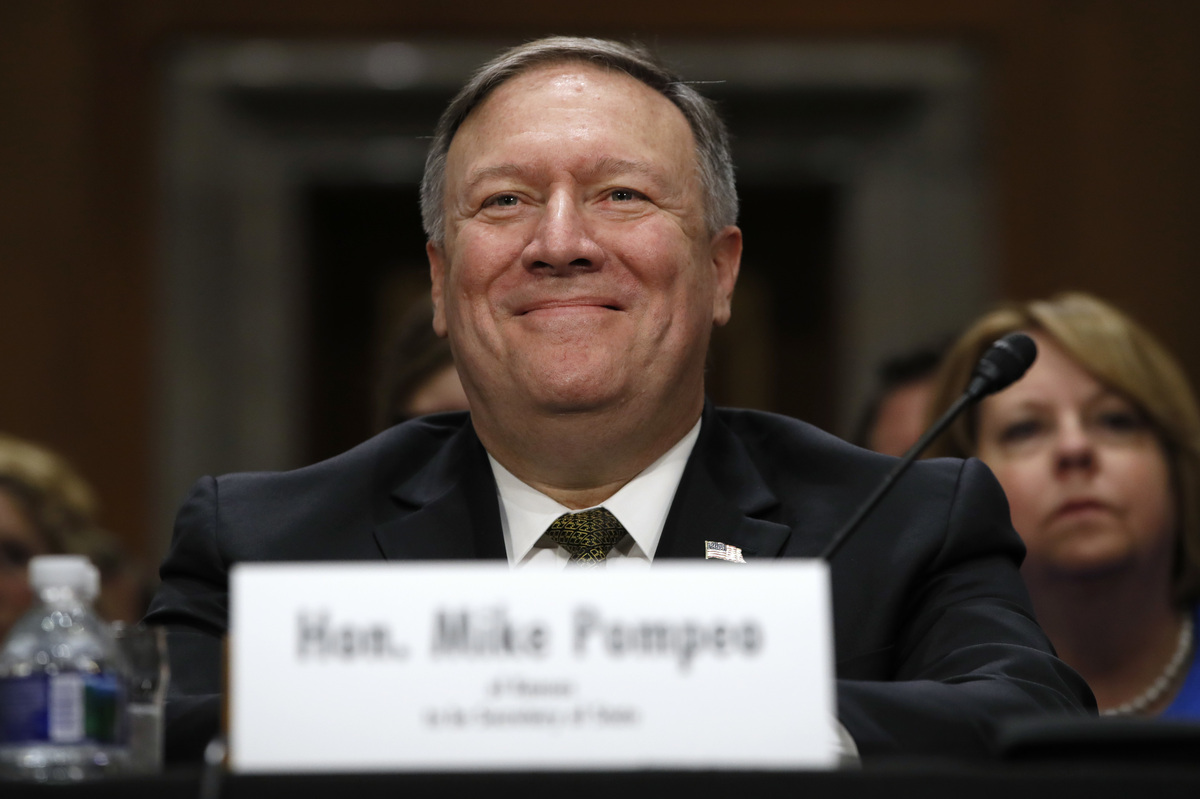 Secretary of State-designate Mike Pompeo smiles after his introduction before the Senate Foreign Relations Committee during a confirmation hearing on April 12 on Capitol Hill.

Mike Pompeo is on track to become secretary of state after a key Republican senator gave a last-minute endorsement of the CIA director.

The secretary of state-designate's nomination was approved by the Senate Foreign Relations Committee Monday night on a party-line vote. The vote was 10 Republicans for Pompeo, nine Democrats against. One Democrat voted present.

There was some drama around the vote. Initially, Sen. Rand Paul, R-Ky. opposed the nomination of Pompeo but changed his mind shortly before the committee met. With all of the panel's Democrats opposed Pompeo and one Republican member unable to make it back in time, the stage was set for a tie vote on the committee until Sen. Chris Coons, D-Del., changed his vote to present, enabling the nomination to advance.

Earlier Monday, Pompeo's nomination looked like it would be unfavorably reported by the committee because no Democrat on the 11-10 panel would support him and neither did Paul, R-Ky.

Minutes before the committee meeting, Paul issued a statement saying that he would back Pompeo.

Pompeo faced unified opposition from Democrats on the panel. On Friday, Coons came me out against the nomination, stating that Pompeo — whom Democrats regard as a military hawk — will embolden "President Trump's most belligerent and dangerous instincts."

Democrats also point to Pompeo's past positions, including his opposition to the Iran nuclear deal when he served in Congress, as evidence that he is not qualified to be America's top diplomat.

"I cannot overlook grave doubts about his anti-diplomacy disposition," said Sen. Tim Kaine, D-Va., in a statement opposing Pompeo, even though he was one of 14 Democrats who voted in favor of his previous nomination for his current post at CIA.

An unfavorable recommendation out of committee would have had no practical effect. Senate Majority Leader Mitch McConnell, R-Ky., still intends to hold a full Senate confirmation vote this week, but the absence of an affirmative committee vote would have been unprecedented for a State Department nominee, according to the Senate Historical Office.

"We're going to vote on Monday night, and I agree with you that it doesn't look promising as far as an affirmative vote," Senate Foreign Relations Chairman Bob Corker, R-Tenn., told reporters last Friday. He chalked up Democratic opposition to partisan election-year politics and not a statement on Pompeo's qualifications.

"It's just the environment we're in. The left, the base on the Democratic side abhors the president, and I realize many of them just don't want to do anything that shows a proxy of support for Trump by voting for his secretary of state," Corker said. "I really do think Pompeo is highly qualified, and I think in their heart of hearts, truth-serum wise, [Democrats] would probably agree."

One Democrat, North Dakota's Heidi Heitkamp, announced Friday she would back Pompeo's nomination. On Monday, Democratic Sens. Joe Manchin and Joe Donnelly also announced they would vote for Pompeo, signaling he very likely has the support he needs on the Senate floor.

"Pompeo demonstrated during this nomination process and during our meeting in March that he is committed to empowering the diplomats at the State Department so they can do their jobs in advancing American interests," Heitkamp said in a statement.

With a narrow Republican 51-49 majority (Sen. John McCain, R-Ariz., is absent because of illness), McConnell now very likely has 53 votes in favor of the nomination. Sen. Jeff Flake, R-Ariz., has not publicly committed to supporting Pompeo, but his GOP colleagues are confident he ultimately will vote for his nomination.

Historically, secretaries of state have enjoyed large, bipartisan margins of support. Senators have generally held the view that presidents are allowed to have the Cabinet of their choosing as long as there are no glaring problems with the nominees. Both Secretaries Hillary Clinton and John Kerry were confirmed with 94 votes in support under President Barack Obama. Secretary Condoleezza Rice was confirmed with 85 votes, and Secretary Colin Powell was so popular it didn't even require a roll call — the Senate approved it by a voice vote — under President George W. Bush.

President Trump has not fared as well. Secretary of State Rex Tillerson won approval with just 56 votes in favor of his nomination, the most votes against a state nominee in Senate history. Later this week, Pompeo might test that record.

Republicans like Corker shrug at the prospect of a historically low vote.

"I mean, at the end of the day, whether the committee gives a negative recommendation and you still get 50 votes on the floor, even if it takes the vice president, you're still secretary of state and all of this dissipates," he said.